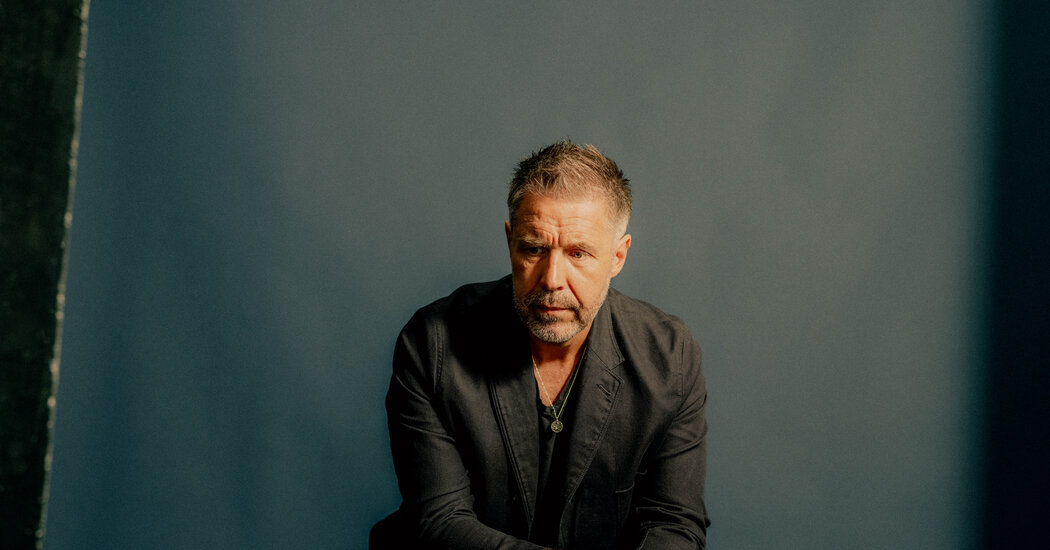 This interview includes spoilers for Sunday’s episode of “House of the Dragon.”

The Iron Throne could be a cruel and uncomfortable seat. On the earth of George R.R. Martin’s books, it is assumed to have a mind of its own, rejecting those unfit to rule with well-placed nicks.

In “Game of Thrones,” this seat produced from the blades of vanquished rivals was intimidating to behold, however it was not much of a threat to life or limb. “House of the Dragon” hews closer to Martin’s vision and adds a latest twist — the cuts that Viserys (Paddy Considine) suffers not only refuse to heal, but infect him with a very nasty strain of leprosy. His reign eats him alive.

“I at all times viewed the throne as a cursed property,” Considine said on Monday morning. “It’s made from the swords that individuals died on, and it has this strange power about it.”

By Sunday night’s episode, the eighth of the season, Viserys now not looks like a proud Targaryen king — he more closely resembles the Phantom of the Opera (with that metal mask obscuring half his face) or the Crypt Keeper (with those gaping holes beneath it). (The startling effect was created with a mix of prosthetic makeup, visual effects and a body double.) Viserys lives a half-life under the influence of the pain-dulling (and mind-clouding) Westerosi morphine called milk of the poppy. Until, that’s, he skips the meds for one last visit to the royal court, to defend the rights of his daughter and named heir, Rhaenyra (Emma D’Arcy), and to attend a family supper, where he urges the relatives to put aside their grievances.

Considine gives a grave and poignant performance as Viserys. Due to the show’s out-of-order shooting schedule, the actor’s earliest scenes required him to depict a number of the later stages of Viserys’s deterioration first — a physical transformation that was a closely guarded secret on set. (Security guards followed him around with view-blocking umbrellas.)

Together with his onscreen visage revealed to all but himself, Considine discussed the show’s latest revelations in a phone conversation from London on Monday. These are edited excerpts from the conversation.

Have you ever seen your death episode yet?

No, I haven’t, and I’m unsure if I ever will. I haven’t seen anything beyond Episode 2, really. Some people don’t like to look at themselves, and I’m certainly one of those people. It’s debilitating. I are inclined to just stay away. I’m sure any person will show me a photograph.

At what point did you work out what the king’s stages of degradation would appear like?

Very early on, you’re still forming the character, and I knew it was going to come back to an end with some sort of transformation, so that you’re at all times searching for references for that. I happened to be watching a documentary about certainly one of my favorite artists, Richard Hambleton [a Canadian conceptual artist who died in 2017], and watching his physical decline through cancer, addiction and scoliosis. I said to Miguel Sapochnik [an executive producer, and a showrunner for the first season], “This is able to be an excellent idea for where Viserys finally ends up.” So I had somewhere in my head that I could map where I used to be going to get to.

The extremity — Viserys looking so emaciated, the way it’s so cancerous, this thing, that it eats into his face — that call was made greater than halfway into the shoot. So it went probably more extreme than I had originally imagined it might go.

I watched my dad die of cancer, and it was a really rapid demise. So it actually made sense to me, and I feel it was pretty shocking and effective. It becomes a physical manifestation of all of the infighting and skulduggery, really. The mystery is why so many individuals crave the Iron Throne. It’s not something Viserys craved; he just had a way of duty. He knows the burden of being king, the burden of the responsibility, and the toll it could possibly take.

From the minute of his wife’s funeral, I feel Viserys starts to die. It’s a slow death. Nowhere within the story does Viserys ask the maesters to cure him, to stop this thing from eating him alive. I feel he accepts it as a part of the guilt of the choice he makes to place his wife through a terrible, horrible procedure. It’s like individuals who give up to illness. Once they offer suggestions to cure him, he doesn’t trouble with it. He lets it devour him. He surrenders. That was my thing for him, anyway.

In some ways, he let the leeches into his life — the maesters, the Hightowers. After this last moment within the throne room, do you wonder if Viserys made a mistake not giving the position of hand of the king to his brother Daemon as a substitute?

Absolutely not! [Laughs.] Daemon was a liability. It never would have worked. Viserys knew Daemon couldn’t sit in Small Council meetings for 12 hours straight. He doesn’t have the temperament. Even at the top, there aren’t words in that relationship. Daemon helps him up there, and he puts the crown on his head, and that said every thing that he’s never said, without uttering a word. But that guy could never have been in a position to be Viserys’s hand.

Shouldn’t he a minimum of have told Daemon or others in regards to the prophecy?

No way, not at the moment. That’s something that we struggled with. There was a scene that was deleted after Aemma (Sian Brooke) died, where Viserys meets with Daemon and he tries to hint at this concept of prophecies and what the gods mean to him. He was attempting to get some idea where Daemon’s at together with his beliefs, however the tone of the scene was never quite right. There’s no way that Daemon would even hook up with that — he’d laugh Viserys out of the room. He’s not into dreamers or things like that.

On his deathbed, Viserys mistakes Alicent (Olivia Cooke) for Rhaenyra, and reaffirms the prophecy to her. When she leaves, he seems to think he’s talking to another person.

The one suggestion [in the script] is that he doesn’t quite know who he’s talking to. I at all times had an idea in my head, whether it was useful to the story or not, that the very last thing Viserys sees before he dies is the one who comes to gather him from this mortal life. When he dies, he sees Aemma, and he says, “My love.”

I just sort of improvised that line, and reached out slightly bit, because this to me is a tragic love story, in some ways. But I kept that personal; I never actually disclosed that ultimately. I just thought, “In the event that they use it, they use it,” and I hear it’s made the cut, so I’m really grateful, since it ends that story quite beautifully. The narrative I had in my mind was that he never really gets over Aemma, that he’s devastated for the remainder of his life.

Do you’re thinking that Viserys’s feelings about Aemma affected how he treated his progeny with Alicent? Because he’s barely involved with them.

He gives up on them. He’s so protective of Rhaenyra, and he’s no idiot — he knows that her [first three sons] will not be Laenor Velaryon’s children. He’s just at a certain point in his life, together with his latest family, that he doesn’t take much of an interest in his other children. And the youngsters even sussed that out, you understand, the actors playing the youngsters. They said they thought I hated them! I used to be like, “Where have you ever had that from? I don’t hate you.” They meant Viserys, not Paddy.

I actually didn’t hate them, but I just had no time for them. That happens in families, doesn’t it? He’s there, but not there. Rhaenyra, she’s the link to Aemma, and so far as he’s concerned, she’s his only child.

Alicent appears to misinterpret Viserys’s deathbed talk of prophecy, taking his reference to Aegon I to seek advice from their son Aegon II (now played by Tom Glynn-Carney), which may lead her to reassert his claim to the throne. What did you’re thinking that of that moment, and what that prophecy amounts to, 200 years down the road?

In behind-the-scenes footage on HBO Max, you were dancing within the throne room, twirling your dragon cane. You said you were “serving Targaryen realness.”

I really like “Drag Race.” There was something about dressing up in these flamboyant costumes that brought out my inner drag, having that lovely blond hair. I never got to decorate in anything like that before, and it’d never occur again. So that you’ve got to enjoy it, haven’t you?

If a later season of “House of the Dragon” were to do flashbacks to this era, would you think about coming back to play Viserys?

I really like him a lot. I feel he’s my favorite character I’ve ever played. But I’d struggle with that. His story has been told. He made his impact. He was the peaceful king that everyone thought was a bore, and he brought some love and compassion to the show. I don’t know what more you could possibly do with that. So I feel that is the top.