‘House of the Dragon’ Season 1 Finale Recap: A Queen Rises 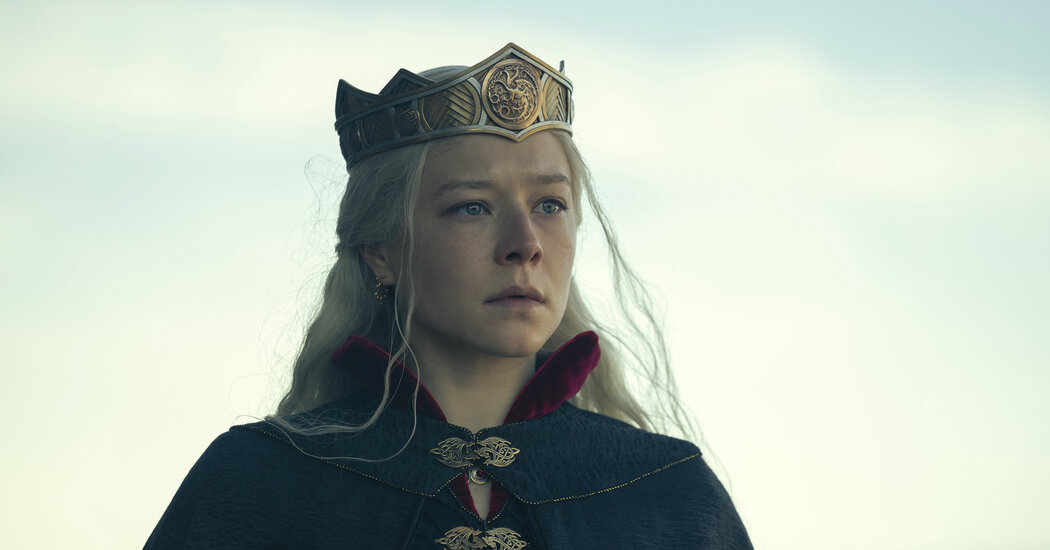 It’s all fun and games until the dragons get indignant.

In Sunday’s season finale of “House of the Dragon,” that rule applied primarily to Arrax and Vhagar, who took the airborne bullying Aemond had initiated further than he intended. When the much smaller Arrax fought back against its tormentor by delivering a face full of fireside — shades of his rider Lucerys’s de-eyeing of Aemond, the foundation of their rivalry — Vhagar retaliated with the chomp heard ’around the world.

Nevertheless it also applies to Rhaenyra, who, now that Viserys is gone, becomes this story’s head dragon in charge.

She looked it this week, delivering her own baby before embracing her inner queen, showing grit and restraint as she stood as much as Otto, Daemon and her hawkish advisers. Then, in a stunner of a final scene that saw her processing Lucerys’s death before turning back to the camera, the image of grief-stricken, vengeful resolve, we saw that the war we’ve been anticipating for the reason that starting of this series had finally begun. (The episode was a showcase for Emma D’Arcy, who was good throughout.)

The results of the entire above and more was a stirring, often moving season finale that included lots of the show’s signature elements because it arrange the conflict, known in George R.R. Martin’s “Fire & Blood” book because the Dance of the Dragons. There was thrilling dragon motion, one other brutal birth scene, one other profane face-off between Daemon and Otto, one other mature discussion between Rhaenys and the Sea Snake, this story’s most functional couple (the Sea Snake’s adventuring aside).

All of it began with a very terrible day for Rhaenyra, who early on learned that her father had died and that her former best friend had connived to steal the throne from her. Then she gave birth to a stillborn baby.

It was a rough begin to a reign that was about to get even rougher. But first we watched the brand new queen grow into her role as she put aside her anger — unlike Daemon, who reminded everyone how temperamentally unfit for ruling he’s — and commenced planning to consolidate her support.

This mostly involved moving tokens around Dragonstone’s Painted Table, which you may recall as the location of Stannis and Melisandre’s shadow-baby conception in “Game of Thrones.” (Within the lore, Aegon the Conqueror had the table built so he could plan his conquest of Westeros.)

It was Rhaenyra’s cool head as others agitated for war that convinced Rhaenys, a conspicuous holdout within the early scenes, to throw her support behind the brand new queen and, in turn, persuade the healing Sea Snake to do the identical.

His pledge of the formidable Velaryon fleet was Rhaenyra’s biggest coup, a reason for optimism as she planned to send envoys to secure the backing of three essential houses: the Starks in Winterfell, the Tullys in Riverrun and the Baratheons in Storm’s End. Alas, that optimism was short-lived.

Lucerys carried the stink of tragedy from the earliest moments of the episode. The opening scene found him anxiously pawing on the table and fretting over Driftmark, which he was set to inherit once the Sea Snake sheds this mortal coil. “I’ll just break all the things,” he told Rhaenyra. “I don’t want Driftmark.” (Luc, I even have excellent news and bad news … )

Later we saw Jacaerys pounding him into the sand during sparring practice. By the point Rhaenyra told Lucerys, “I expect you’ll receive a really warm welcome” at Storm’s End, things were beginning to look pretty grim. Then when the camera lingered on his departure from Dragonstone, until the little boy on his little dragon faded into the night, I used to be sure he was a goner.

And that was before he landed and saw first Vhagar after which Aemond at Baratheon HQ. Rhaenyra wasn’t improper: The eternally proud Lord Borros did seem pleased to host a prince of the realm and his dragon. It’s just that a unique one showed up first with a greater offer, plus a sapphire shoved into his eye socket for extra dazzle.

Aemond, a walking grudge, taunted Luc first by land, ordering him to present up the attention Alicent way back demanded at Laena’s funeral, after which by air. But once the dragons got the scent of combat of their scaly nostrils, each riders briefly lost control and that was that. The unintended consequence called back to Rhaenyra’s sage response to Daemon’s bragging about their superior firepower.

“When dragons flew to war, all the things burned,” she said, referring to the battles of Old Valyria. “I don’t want to rule over a kingdom of ash and bone.”

I suppose we’ll need to wait until next season to see whether, after Luc’s death, she’s still within the mood for sensible council. For Rhaenyra, the season finale began and ended with the lack of a baby. While the death of the infant was awful by itself, it also, in a clever little bit of writing, served to indicate us Rhaenyra’s deep maternal grief upfront of Luc’s killing. (The showrunner Ryan Condal wrote the episode, which was directed by Greg Yaitanes.) That allowed us to fill within the blanks as she stood by the fireplace, her back to us and her subjects as she convulsed in anguish on the lack of her son.

Earlier, in her clear-thinking, strategic mode, Rhaenyra reminded Daemon of her responsibilities to unite the realm and of her even greater responsibility to humankind, as laid out by the Song of Ice and Fire. (He wasn’t into it.) On this she directly channeled her late father, who tried to unite his family to the tip and spent his down time symbolically assembling a model of Old Valyria, a civilization fated to collapse.

Because Westeros still stands two centuries later, when “Game of Thrones” gets going, we all know that whatever wars transpire next season and beyond, this realm won’t totally collapse. But when Rhaenyra turned around for the last shot of this season, finally the angriest dragon of all, she looked able to burn all of it down.

The nice and terrible ‘Dragon’

Will Rhaenyra burn all of it down, in classic Targaryen fashion? That’s a matter for future episodes. But now that the primary season of “House of the Dragon” is within the books, it’s value pondering a unique query: Was it any good?

There’s an annoying tendency for the discourse around, well, all the things, but particularly popular culture to fall along hard binaries. Things are amazing or they’re terrible, the tip.

When it got here to “Dragon,” each week I heard from advocates on each side. (Though with a mean of around 29 million viewers each episode, in keeping with HBO, lots of the complainers appear to be sticking with it.) The reality of the matter, as usual, is somewhere in the center.

Was the primary season amazing? No. The narrow concentrate on one family and its tense arguments in dark rooms gave the series a claustrophobic feel that, though tonally useful in a story about individuals who feel certain by various restraints — related to gender, order of birth, royal responsibilities and so forth — was increasingly wearying because the season went on. (For the record, I wasn’t as annoyed as others by the occasionally murky cinematography, but I get it.)

One other, more fundamental truth became clearer each week: This show just doesn’t contain the qualities that I liked most about “Game of Thrones,” a minimum of not yet.

The dimensions; the kaleidoscopic travelogue experience of watching a fascinating world be revealed, week by week; the narrative number of a dozen different story lines and the joys of watching them come together; the dark comedy; the cinematic set pieces and spectacle — “Dragon” had almost none of that.

Then there have been the more granular problems, specific to the story and its structure. The frequent time jumps and the solid changes they necessitated had a distancing effect because viewers bond with performers, not characters. Gen Xers remember the dissonance of the 2 Darrins in “Bewitched” reruns and two Beckys in “Roseanne,” persistent TV punch lines of our youth. “Dragon” offered an analogous sensation nearly every week.

The time gaps also resulted in seeing chunks of every episode given over to expository dialogue and in erratic characterizations. Alicent, particularly, was in every single place from week to week: loving Rhaenyra then attempting to kill her, accepting her planned ascendancy after which usurping it. Their friendship and its convulsions are defining elements of the story, in fact. But the fast glimpses we got of their evolving relationship, over many years, made it hard to emotionally put money into it.

I don’t blame Olivia Cooke. She adroitly juggled Alicent’s mercurial emotions and was convincing even when the show had her doing silly things, like attacking Rhaenyra with a dagger or misunderstanding Viserys’s dying words. Your entire solid was terrific throughout.

Which leads us to the opposite half of the binary: Is “House of the Dragon” terrible? Removed from it, and there are many reasons to think it’s going to recuperate because it goes on.

Whatever the failings of the time jumps, the casting directors consistently found excellent actors to fill each iteration of the characters. Paddy Considine might be missed, but the opposite leads, particularly D’Arcy, Matt Smith and, more recently, Ewan Mitchell as adult Aemond, are fascinating performers.

Battles and campaigns will take the show out of the castles that confined it for many of the first season — all those shots of the Painted Table perhaps doubled as a preview of the places we’ll go in Season 2. The conflict may even presumably boost the spectacle factor and eliminate the necessity for jarring time jumps.

So I’m bullish on next season. Crucial thing, from a big-picture perspective, is that at its best, “Dragon” nailed essentially the most appealing thing about Martin’s storytelling: the sense of history’s being driven by people and their recognizable, occasionally petty hopes, fears and flaws. Consider that the Dance of the Dragons has apparently just began because of the legacy of a fight between children a few years ago.

Regardless of the narrative threads and connections, the crucial thing “Dragon” shares with “Thrones” is its sense of mucky, earthy humanity, particularly compared to something like “The Lord of the Rings: The Rings of Power.” (I’m not here to begin fights — I’m thrilled should you loved it, however it was just too oratorical and grandiose for me.)

Come for the dragons doing dragon stuff. Stay for the people being people. You could possibly do worse on a Sunday night.