‘House of the Dragon’: Steve Toussaint on Playing Lord Corlys 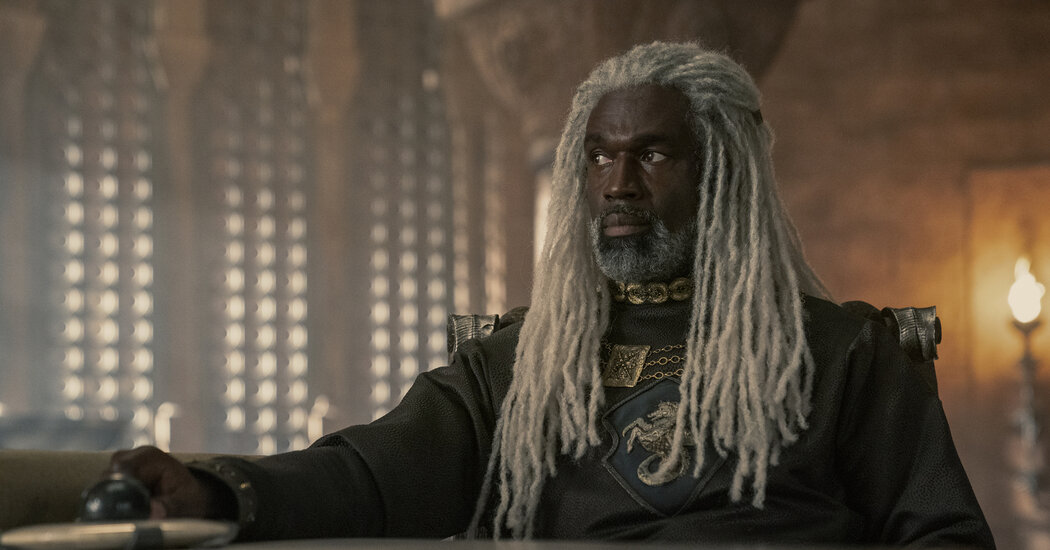 This interview includes spoilers for the primary two episodes of “House of the Dragon.”

Legendary explorer, naval commander, lord of a noble house that has long earned its living from the ocean: Corlys Velaryon, a.k.a. the Sea Snake, is a ship guy, through and thru. Steve Toussaint, the British actor who plays him on “House of the Dragon,” will not be.

“It’s a weird thing,” he said, laughing. “The last couple of times I’ve been on a ship, I suddenly began getting seasick. I’ve never had that in my life, but only recently it began happening.”

Whatever Toussaint’s shortcomings as a sailor, Lord Corlys’s prowess on the ocean is so formidable that even the dragon-riding scions of the ruling monarchy, House Targaryen, must show him deference. Within the show’s second episode, he even rage-quits the Small Council led by King Viserys (Paddy Considine) — he’s one in all the few people within the Seven Kingdoms who can turn his back on the ruling monarch and survive.

Corlys’s in-world untouchability makes for a salutary counterpoint to the racist reactions Toussaint has faced in some quarters. The actor, who’s Black, portrays a personality of direct descent from the fallen empire of Valyria who’s assumed to be white within the source material by George R.R. Martin, the book “Fire & Blood.” On the earth of the show, created by Martin with Ryan Condal, Corlys’s power and prowess are presented unapologetically, without caveat.

“I assume some people live in a distinct world,” Toussaint said of the controversy. “I’m very lucky that I actually have friends who’re of all persuasions. I’ve got Caucasian friends, East Asian friends, South Asian friends, Black friends. That’s my world, and I would like to be in programs that reflect that world.”

In a phone conversation last week, Toussaint spoke from London concerning the forces that drive Corlys and knowing which rules to follow and which of them to interrupt. These are edited excerpts from that conversation.

Corlys has a cool factor that even a number of the most charismatic characters lack. He just seems comfortable in his own skin in a way that many others aren’t.

Funny enough, after I had the initial meeting with Ryan and Miguel, the co-showrunners, all we talked about, really, was fatherhood and his feelings about his family. He’s got this desire to cement the Velaryon name in history. He feels the slights to his wife [Princess Rhaenys, played by Eve Best], the proven fact that she was omitted [for the Iron Throne], greater than she does.

And when he’s realized he can’t get her back on the throne, the subsequent thing for him is get the family as near power as possible, i.e. marry off the children not directly or other.

How does Corlys feel about going through with this ritual of getting his 12-year-old daughter, Laena [Nova Fouellis-Mosé], court the king? Does he have second thoughts about this technique in any respect?

The thing about Corlys is he’s a stickler for the principles. Despite the proven fact that he felt that his wife is the more capable person to be on the throne versus Viserys, that’s what [the Great Council] selected. He thinks they made a mistake, but: “These are the principles that I’ve been given. That is how we’ve decided power dynamics work in that world. OK, well in that case, I’ll do that.”

So in Episode 1, when Otto Hightower [Rhys Ifans] says to Viserys, “We’ve got to discuss your succession,” it’s Corlys, despite the proven fact that he wants his wife to be on the throne, who says: “No, no, we’ve an heir. It’s Daemon [the king’s younger brother, played by Matt Smith].” Now, it is probably not to everyone’s liking, but that’s what the principles are. When there may be a dispute about [the king’s daughter] Rhaenyra’s position, he again is like, “Well, her father selected her, and so we’ve to go along with that.”

I feel he’s like, “I don’t like these rules, but these are the principles. What can I do to thrive in them?”

It’s not only that Corlys built his family’s fortune — he did so by making nine legendary voyages to distant lands, putting himself in great danger. Is that at the back of your mind as you play him?

Yes. I remember saying to Ryan at one point, “It will be great to have some form of write-up in order that I’ve got a memory of them,” mainly. Ryan was adequate to come back back with a complete dossier of stuff, because Ryan is a supergeek. [Laughs.] It’s an enormous a part of Corlys’s very being, what he did.

It’s interesting that you simply said he put himself in great danger. I don’t know if, on the time, he would have considered it that way. He just had an adventurous spirit. He desired to get on the market and see what was beyond the known world at the moment. Actually after I was in my teens and early 20s, there was no fear — I used to be going to live without end.

Obviously, being an older man and sitting around these individuals who wish to talk so cavalierly about war, there’s an element of him that’s like, “No, I’ve seen it, you haven’t. Should you’d seen it, you wouldn’t be talking this fashion.”

The thing about battle is you either succeed otherwise you don’t — there’s no gray area. He likes that. He’d prefer it if life were like that, generally. That’s one in all the explanations he’s not all the time entirely comfortable within the Small Council with diplomacy and so forth. “If something is correct, it’s right. Let’s just do it.”

Did that make it difficult to play those Small Council scenes?

By way of the character, the resentment that Corlys has for what he considers these privileged people helps me rather a lot. In truth, there have been some points where Ryan would must rein me in and go: “Should you spoke to the king like that, you’d have your head cut off. You’ve gone too far.” It will be tougher for somebody like — and I didn’t have this discussion with them, so I don’t know — Paddy or possibly Gavin Spokes [who plays the Small Council member Lord Lyonel Strong], whose characters must be mindful of not upsetting people and attempting to keep the balance. I never felt that way with my character.

There’s a side to him that’s, so far as he’s concerned, above the principles. Also, he knows just how beneficial he’s for the realm, because he controls the vast majority of the navy. So he knows he’s got somewhat bit more leeway.

You’ve talked concerning the racist backlash that you simply initially faced from some segments of the fandom if you were solid. Has that improved?

There are still trickles coming through, but generally, it’s been great. The overwhelming majority of individuals have been very welcoming and supportive.

Some people have gone out of their technique to find my timeline in order that they can explain to me that “It’s all concerning the books” and so forth. My view is that this: There are shows on TV that I don’t like — I just don’t watch them. There are actors that I don’t find interesting — I just never feel the necessity to broadcast I don’t like them. There are some individuals who don’t like my appearance and don’t think someone like me must be playing that specific role because once they read the book, they saw it a distinct way. All of that’s natural. My objection is to individuals who have racially abused me.

For some reason, the responses that I’ve been getting recently appear to have neglected that, as if I’m just going, “You don’t like me, and due to this fact you’re racist.” That’s not what I’m saying. I don’t know what people’s motivations are. But I do know the motivations of any person who calls me the n-word. I do know what meaning.

Were you a “Game of Thrones” guy before you bought this part?

Yes, I used to be. It had been going for about three or 4 seasons before I actually watched it because fantasy will not be really my genre. I used to be staying with a friend in L.A., and he said to me, “Have you ever seen this ‘Game of Thrones’?” And I used to be like: “No. It’s got dragons, why the hell would I watch that?” [Laughs.] He said, “Just watch one episode.” And it was so way more gritty and, for want of a greater word, realistic than I used to be expecting. I used to be hooked.