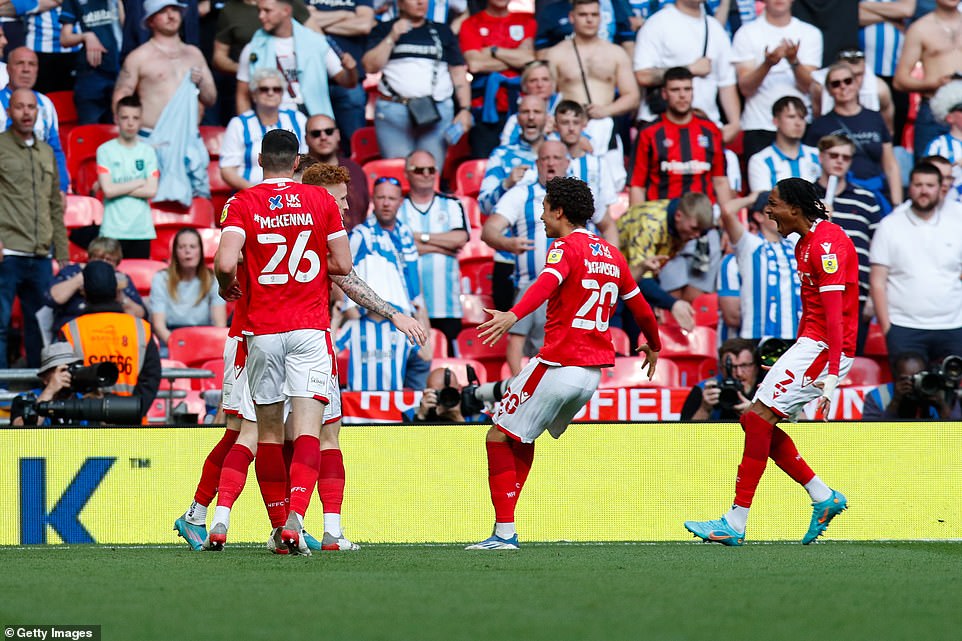 Huddersfield 0-1 Nottingham Forest: Levi Colwill own goal sees Forest end 23-year wait to return to the Premier League as Huddersfield’s Harry Toffolo is booked for diving despite appearing to be caught contained in the Forest area

By Matt Barlow for the Each day Mail

Far have they travelled and far have they seen as they prefer to sing at Nottingham Forest and, for 23 years, it has not featured the Premier League.

However the long wait is over and Forest are heading back to top tier after beating Huddersfield at Wembley Stadium, courtesy of an own goal by teenage defender Levi Colwill and a generous oversight by the officials.

They were second better of long periods of the play-off final, but they’ve served their time within the doldrums and it’s inconceivable to begrudge them this success, which comes with the Premier League bounty of £180million. 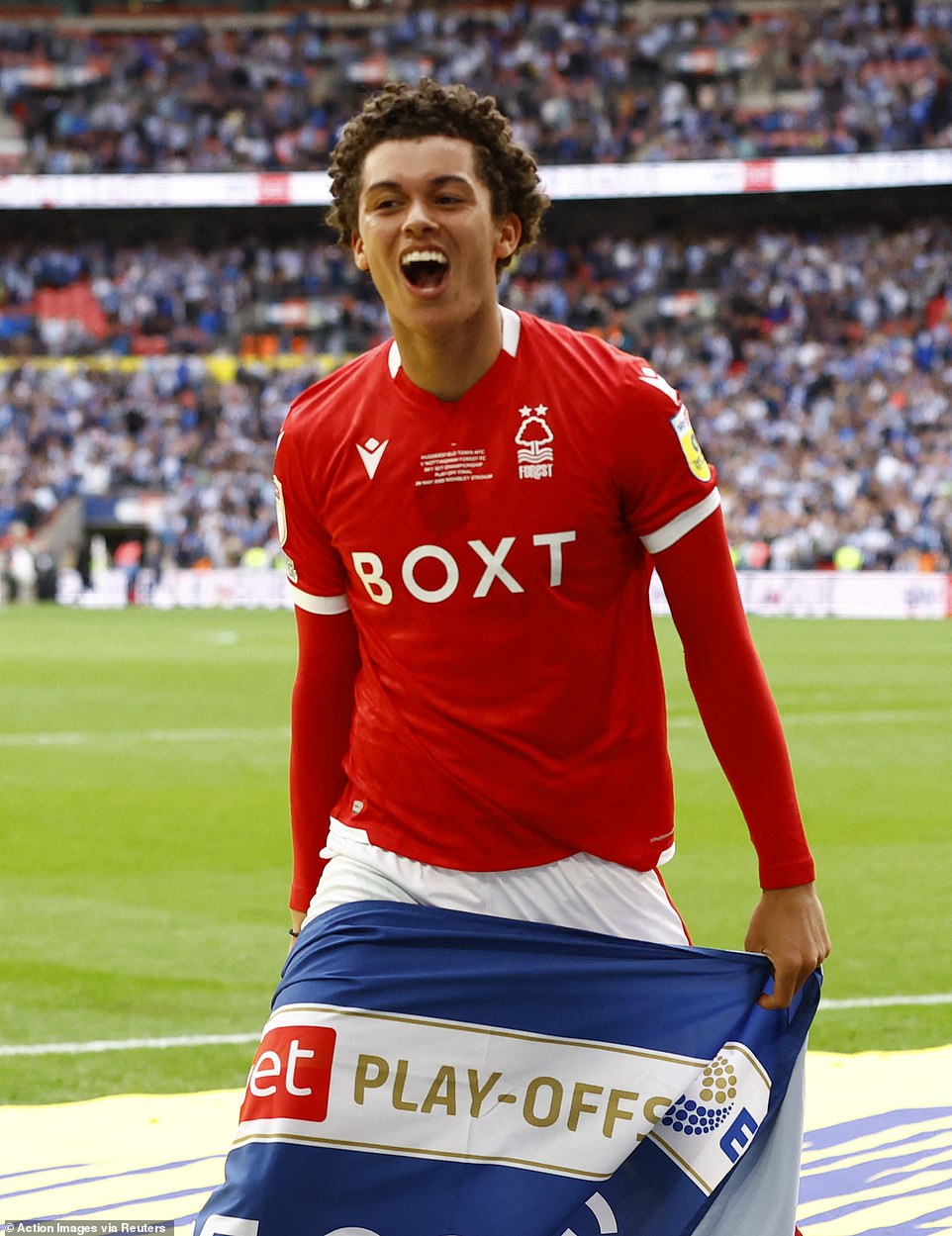 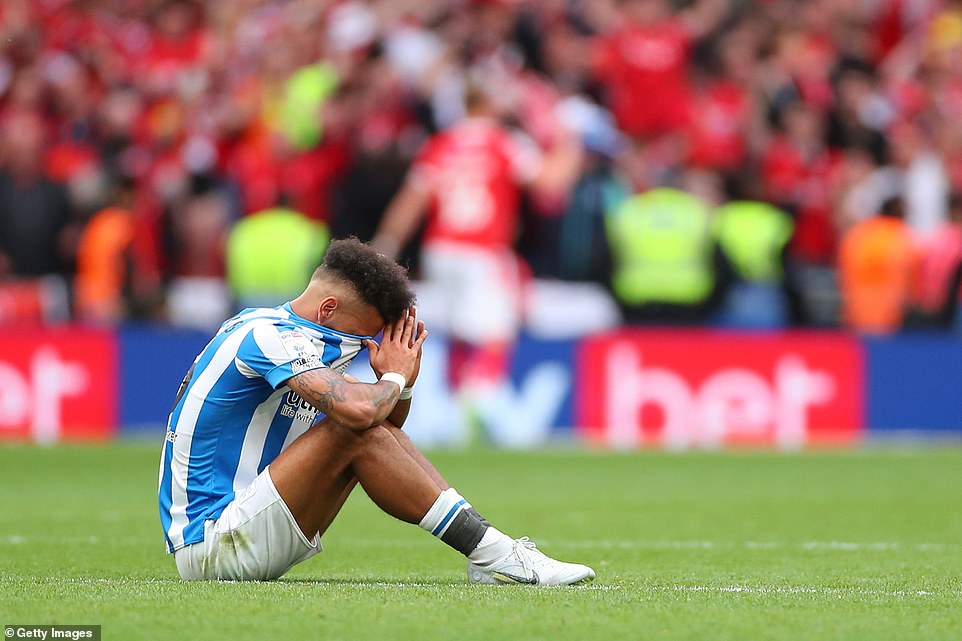 Little wonder they celebrated wildly as Huddersfield players crashed to the turf at the ultimate whistle.

Having began season with one point from seven games, it’s an incredible ascent by Steve Cooper’s team.

Perhaps they earned their luck, the goal just before half-time and the choice by veteran referee Jon Moss to not penalise Jack Colback for a foul, late within the second half.

Forest were at the brand new Wembley for the primary time, making their first appearance for 30 years since a League Cup final defeat against Manchester United. They dominated the early possession without piercing the well-manned Huddersfield defence.

Ryan Yates glanced a header narrowly wide from a free-kick swung in by James Garner and Yates fired over a good likelihood from the sting of the penalty box after a neat touch to release him from Philip Zinckernagel.

These teams finished the season in third and fourth within the Championship only two points apart over 46 games. Forest recovered from a dreadful begin to the campaign, gathering momentum across the second half of the season, and Huddersfield arrived at Wembley unbeaten in nine games.

Carlos Coberan’s team grew in confidence and created a few possibilities of their very own as they settled right into a higher rhythm. Sorba Thomas skipped clear of Joe Worrall on the left and from an angle forced a save from Brice Samba.

This was quickly followed by a smartly worked corner routine, with a flurry of movement and a low cross by Thomas into the feet of Danny Ward just for the striker to see his effort blocked in a congested six-yard box.

Huddersfield slipped behind just before the interval, nevertheless, once they nodded off and allowed Garner the time and space to shape one other dangerous ball into the penalty area.

Heading in the right direction with runners across the road of the ball, a little bit indecision rippled through the defensive ranks. Yates looked more likely to reach it but made no contact and Colwill, having tracked his run, was helpless because the ball struck him and flew into his own net off his right knee from six yards out.

Huddersfield returned in purposeful fashion for the second half, forcing Forest to defend their lead.

Jonathan Hogg flashed a header wide on the near post from one other Thomas corner, and wing-back Toffolo was furious when referee Jon Moss ruled he had dived in an try and win a penalty, within the 73rd minute.

The video replays showed it was a transparent trip by Jack Colback, but referee Moss, making his final appearance before retirement, booked Toffolo and awarded a free-kick to Forest for simulation. He was not referred the pitch-side monitors by his video assistant Paul Tierney.

Colback’s relief was obvious as he crossed himself. High up in the manager seats, Forest’s Greek owner Evangelos Marinakis did the identical.

There was more frustration for Corberan when one other penalty claim for a foul by substitute Max Lowe on Lewis O’Brien was ignored by Moss within the closing stages.

Forest were hanging on, defending deep and protecting their penalty area and running down the clock where they might with calls for treatment, including goalkeeper Samba, who limped off within the 89th minute

When O’Brien’s shot flashed across goal and wide in stoppage time, Forest were home.

Recap as Sportsmail’s provided live coverage of the Championship Play-Off final between Huddersfield and Nottingham Forest at Wembley Stadium.