In a Jam-Packed Weekend at Ojai, a Musical Family Gathers 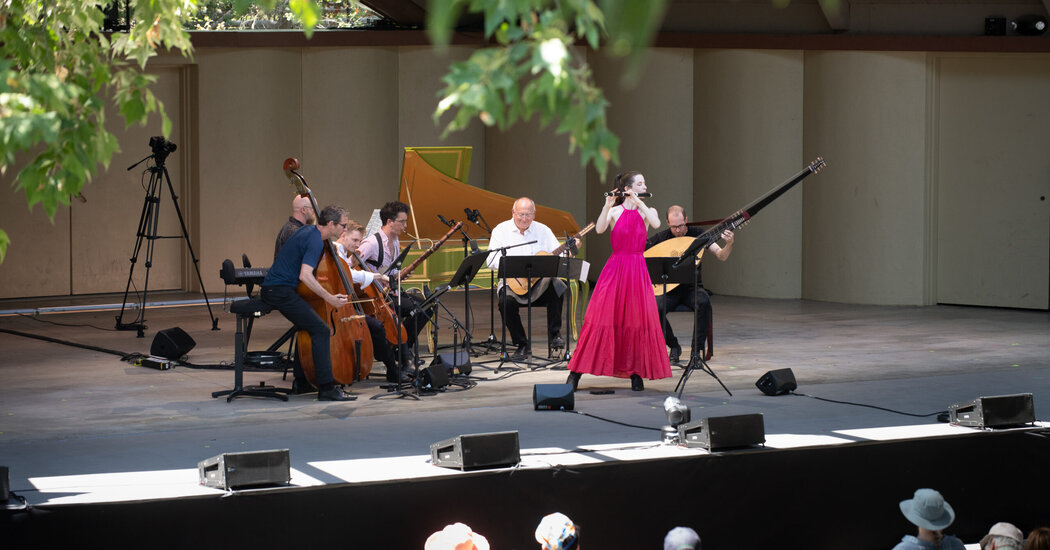 OJAI, Calif. — “We’re multiple, fractious and free,” a trio of voices sang with mock formality here on Saturday evening. “We call you to the table of a loving family.”

As a mission statement for the 2022 Ojai Music Festival, you might hardly do higher. Annually this four-day event is programmed by a unique music director — it may very well be a violinist, a conductor, a composer — who leaves a stamp on the offerings.

This time, the stamp was collective. This fertile, post-bohemian valley north of Los Angeles was swarmed last week by the fast-rising American Modern Opera Company — referred to as AMOC, pronounced as in running … well, you recognize.

Many in the humanities as of late talk a giant game about interdisciplinary collaboration, but few walk the walk like AMOC, which counts composers, choreographers, dancers, singers, instrumentalists and a stage director amongst its 17 core members.

At its best — whether performing a zany recent pop musical in regards to the fall of Rome; a witty dance theater piece about rehearsing; or the extraordinary, expansive music of Julius Eastman — AMOC is a celebration, a communal happening, a family dinner.

Pursuing a vision of opera as free-floating, calmly staged assemblages greater than traditional score-and-libretto productions, AMOC works in shifting configurations. Lots of those were showcased here last weekend in a variety of spaces — in and out, under the broiling midday sun and, more happily, the mild stars.

How tightknit is that this group? As Ojai proved, enough to confidently execute complicated, sprawling structured improvisations by George E. Lewis (skittish) and Roscoe Mitchell (luminous) — at 8 within the morning.

THERE IS NOTHING IN music quite like Ojai, now three-quarters of a century old, with that packed morning-to-night-schedule, its number of spaces and the stalwart curiosity of its audience. Led by Ara Guzelimian with a gradual hand, the festival is Southern California relaxed — T-shirts and shorts, possibly a hoodie at night — however the repertory tends rigorous and recondite.

Even the warning that a concert is about to start isn’t the same old docile bells, but a spreading roar of electronics from “Répons” by Pierre Boulez, a tutelary spirit here for a long time.

Hypercomplex Boulezian modernism wasn’t on offer this yr: The composer Matthew Aucoin, who founded AMOC in 2017 with the director Zack Winokur, wrote witheringly in The Latest York Review not way back in regards to the “supersaturated sameness” of Boulez’s music.

Then what was the prevailing style? Consistent with the openness of many young artists now, it was broad. Adaptations of people music were in — including spirituals, the violinist Keir GoGwilt’s feathery fiddling renditions of Scottish ballads, and Aucoin’s hoedown “Shaker Dance.”

So was play with texts, including explorations of how singing and spoken word could share space in a musical context. But the largest recent pieces on this vein — Carolyn Chen’s collaboration with the poet Divya Victor, and Anthony Cheung’s “The Echoing of Tenses” — would profit from prudent trims.

VARIOUS FACETS AND MOODS of Minimalism and its legacy were represented, including Philip Glass songs and, performed in the course of Libbey Park, a part of Tom Johnson’s 1979 solo “Nine Bells.” That featured the percussionist Jonny Allen jogging a precise route across the bells, hitting a step by step evolving riff — sometimes with delicacy, sometimes with violence.

To roiling music, Frederic Rzewski’s “Coming Together” (1971) harps on its text, a letter written by an Attica inmate who died within the rebellion there, spoken with ironic bravado here by the bass-baritone Davóne Tines, the weekend’s most beneficial player. A really different definition of the minimal: On Sunday morning, there was a rare opportunity to listen to Hans Otte’s “The Book of Sounds,” a solo piano epic from the late Seventies and early ’80s, played by Conor Hanick with control and sensitivity.

The birds within the trees across the outdoor Libbey Bowl, the festival’s foremost space, added flickers, and acoustical illusions began to emerge from Otte’s trance; I could have sworn, near the tip, that a mellow horn call was coming out of the piano textures. And on Saturday morning, rotating your head, because the cellist Jay Campbell suggested, brought out different pitches from the densely vibrating mix when he played Catherine Lamb’s “Cross/Collapse” (2010), his long drones hovering beside oscillating electronic tones.

AS GOOD AS ANYTHING this weekend was Andrew McIntosh’s “Little Jimmy” (2020), a quartet for 2 pianists and two percussionists that takes its name from a campsite within the San Gabriel Mountains. McIntosh made field recordings there a couple of months before it was devastated by a hearth, and the resulting piece is a subtly rending reflection on the climate crisis, and what will be salvaged from ashes.

Restrained in his deployment of the recordings, McIntosh conjures an enigmatic, shadowy, quietly colourful world, sometimes bone-dry, sometimes softly shimmering. Piano strings are manipulated with fishing line for a metallic whine; bowing a vibraphone while a tubular bell is gently struck finally ends up sounding like how a shiver feels.

Attending Ojai this yr, you may have been convinced that no music was written from about 1800 to 1970. The early-to-contemporary pipeline was in full swing here, with period and modern instruments mixing freely. Composers including Cassandra Miller, Michael Hersch, Kate Soper and Reiko Füting played with antique styles and fragments; Ruckus, a small Baroque band that shares members with AMOC, was a guest throughout the weekend, joining the flutist Emi Ferguson, her tone silky and tender and her ghostly multiphonics astonishing, in spirited Bach on Saturday morning.

A few of the weekend’s collaborations were more sincere than successful. It wasn’t clear what sudden, stretching choreography added to Allen’s already entrancing movement in “Nine Bells” or in Iannis Xenakis’s “Rebonds.” There was a whiff of trying-it-out college theater in Chen’s “ Fall Apart” (a disco ball swings; a croissant is thrown) and within the dancer Or Schraiber’s “The Cello Player” (a musician carries an armoire on his back; a metronome solemnly ticks).

The performers inhabit archetypes — the moody director, the attractive actor, the warring brothers — in charged, wild episodes that suggest auditioning, going through material and putting it onstage. Life and art blur, as do traditional roles: Instrumentalists dance; dancers sing.

The piece had a very important absence: The superb soprano Julia Bullock tested positive for Covid just before flying to California. She would have been featured throughout the weekend, and her staged version of Messiaen’s “Harawi” promised to be a highlight.

IT SPEAKS TO AMOC’S agility and the depth of its bench that it was able to interchange “Harawi” with Tines’s “Recital No. 1: Mass,” a mixing of soul songs and spirituals with Caroline Shaw’s graceful settings of the words of the Latin Extraordinary. (Ariadne Greif valiantly stepped in for Bullock in other pieces.)

Though he sounded drained and muddy in two Bach arias, Tines was radiantly powerful in “Mass,” his voice careening from airy to rock-solid in Moses Hogan’s “Give Me Jesus.” “Mass” charts a path from being lost to being healed — here, by means of Tines’s improvised, preacher-style account of what he described as a racially charged comment from an audience member the night before.

He was also the magnetic center in a Friday morning performance of works by Eastman, the once forgotten and now acclaimed gay, Black composer, that conveyed this music’s mixture of sternness and exhilaration, its ingenuity and malleability.

Tines was commanding within the chanted exhortations of “Prelude to the Holy Presence of Joan d’Arc.” “Gay Guerrilla,” originally done on 4 pounding pianos, was here more kaleidoscopic with a more varied ensemble; its quotation of the hymn “A Mighty Fortress Is Our God,” often played, took on recent potency when Tines belted it. Starting out as a peppy jam, “Stay On It” moved toward a forceful march before drifting into quiet, lilting elegy.

“We call you to the table of a loving family” worked as metaphor — but for AMOC, it was also literal, evoking the meals which might be a fixture of the group’s annual Vermont retreats. The road was sung in Aucoin’s “Family Dinner,” given its premiere on Saturday. Billed as a set of mini-concertos evoking collective energy and individual talents, the piece felt like an awkwardly paced work in progress, its mixture of instrumental passages, spoken text and poetry settings still finding its form, its ending an abrupt anticlimax.

The more compelling family dinner was “Rome Is Falling,” Doug Balliett’s brainily bubble-gum, lovably shaggy rundown of ancient history — and its obvious contemporary parallels — harking back to “Bloody Bloody Andrew Jackson” and “Hamilton.” The performers were grinning as much because the audience was.

And, for family dessert, a reprise of “Stay On It” closed the festival early Sunday evening. Presided over by Tines, it was a sweetly dancing, full-ensemble jamboree — like each Ojai and AMOC, multiple, fractious and free.