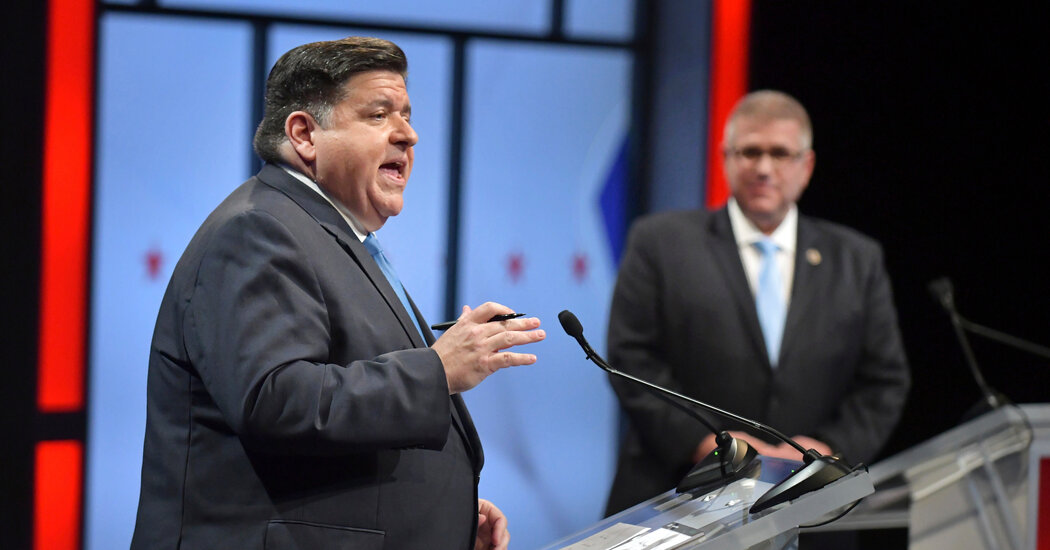 It isn’t any secret that Gov. J.B. Pritzker of Illinois has presidential ambitions. This 12 months he has traveled to Recent Hampshire, used his billions to finance fellow Democratic candidates in critical states and made himself a national figure within the fight for abortion rights and gun control.

So when Mr. Pritzker’s Republican opponent, State Senator Darren Bailey, pulled from his suit jacket pocket a pledge to serve all 4 years of the term on the ballot in November, Mr. Pritzker responded with what was a not-quite-air-tight assertion.

“I intend to serve 4 years more if re-elected,” Mr. Pritzker said. “I intend to support the president, he’s running for re-election.”

President Biden has not formally made that declaration himself, but all indications are that he intends to run, just as Mr. Pritzker intends to serve out a second term. But neither man has made his pledge official.

Mr. Bailey’s pledge presentation was only one moment in an hourlong debate by which he sought to place Mr. Pritzker on the defensive, commonly interrupting the governor or muttering asides while Mr. Pritzker was speaking.

But Mr. Bailey, a far-right legislator, found himself having to elucidate his past statements comparing abortion to the Holocaust.

“The attempted extermination of the Jews in World War II, it doesn’t even compare to a shadow of the life that has been lost to abortion since its legalization,” Mr. Bailey said in a Facebook Live video clip the moderators played through the debate.

The state senator responded by saying “the liberal press” had taken his past remarks, which he said were from 2017, out of context.

“The atrocity of the Holocaust is beyond parallel,” he said.

Asked again to call the Jewish leaders who agreed with him, Mr. Bailey demurred.

“No, I’m not going to place anybody on record,” he said.