Iranian Climber Elnaz Rekabi Is Welcomed by Crowds in Tehran 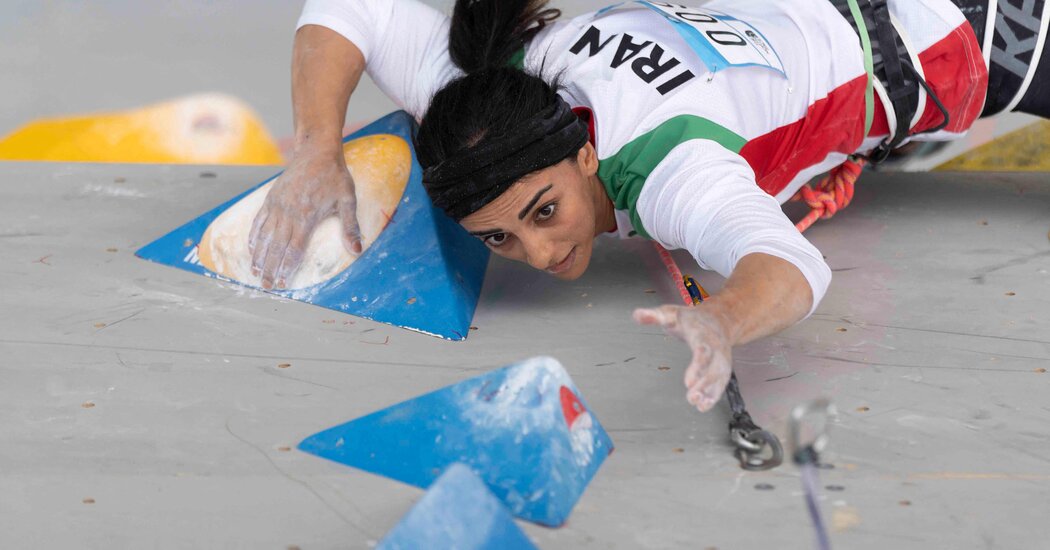 The images seemed reassuring: A whole lot line the road at Tehran’s major airport, cheering and chanting Elnaz Rekabi’s name because the minibus carrying her slowly weaves through the jubilant crowd. “Hero, Elnaz!” cries the throng of men and girls, young and old, gathered outside the terminal, their rhythmic and thundering claps echoing across a neon-lit forecourt.

The hero’s welcome within the early hours of Wednesday morning for Ms. Rekabi, an athlete who was a comparatively obscure figure within the international sports climbing world until just a few days ago, was documented in video footage that was widely circulated on social media and on Iranian news outlets.

Concern for Ms. Rekabi had flared after she made global headlines on Sunday for climbing at a global tournament with no hijab, defying Iran’s strictly enforced dress codes for female athletes. That motion thrust her into the middle of the protest movement in Iran, wherein women have taken center stage within the antigovernment rallies.

Iran has been gripped by protests since September, in what has spiraled into the most important challenge to the Islamic Republic in over a decade. The demonstrations were ignited by the arrest and subsequent death in custody of Mahsa Amini, a 22-year-old woman who was accused by the country’s morality police of wearing her hijab too loosely. The police have denied reports that she was beaten while in detention, saying that she suffered a heart attack, though her family says that she was healthy when she was arrested.

Against that backdrop, Ms. Rekabi’s motivations, and her fate, remain unclear.

As Ms. Rekabi landed in Tehran, footage from an Iranian agency, Borna News, showed her being embraced by her family. Their reunion appears warm though perhaps subdued, with just a few concerned gazes. “Let’s go, let’s go,” says a person as he ushers Ms. Rekabi away, grabbing a bouquet of flowers that has been handed to her. The person’s identity and relation to Ms. Rekabi are unclear.

In an interview on state-run television, Ms. Rekabi appeared calm but serious, covering her hair with a black baseball cap and hooded sweatshirt. “I apologize to the Iranian people for the strain I caused,” she said. “Thank God nothing has happened yet,” she added.

Ms. Rekabi denied reports that she had gone missing in recent days and repeated a claim posted on Tuesday to an Instagram account connected to her that she had only forgotten her hijab. “It happened totally unintentionally,” she told reporters.

The Recent York Times was not in a position to confirm whether Ms. Rekabi had made the Instagram post herself. Iran has been widely criticized by rights groups prior to now for forcing activists to publicly make coerced confessions.

Even though it stays uncertain whether her competing with no hijab act was deliberate, if the footage from the airport is any guide, many Iranians appear to have already made up their minds and adopted Ms. Rekabi as a hero of the country’s protest movement.

Ms. Rekabi said that she intended to proceed competing. “There isn’t any goodbye. I’ll proceed so long as I can proceed in keeping with my beliefs,” she said within the interview with state-run TV. She was then whisked away from the airport. The Times was unable to substantiate her destination or current whereabouts.

Amid a brutal crackdown by Iranian security forces, at the least 240 protesters have thus far been killed, including 32 children, and nearly 8,000 others have been arrested, in keeping with the U.S.-based Human Rights Activists News Agency.