Is that this essentially the most stunning hotel within the French capital? Inside uber-luxury Cheval Blanc Paris 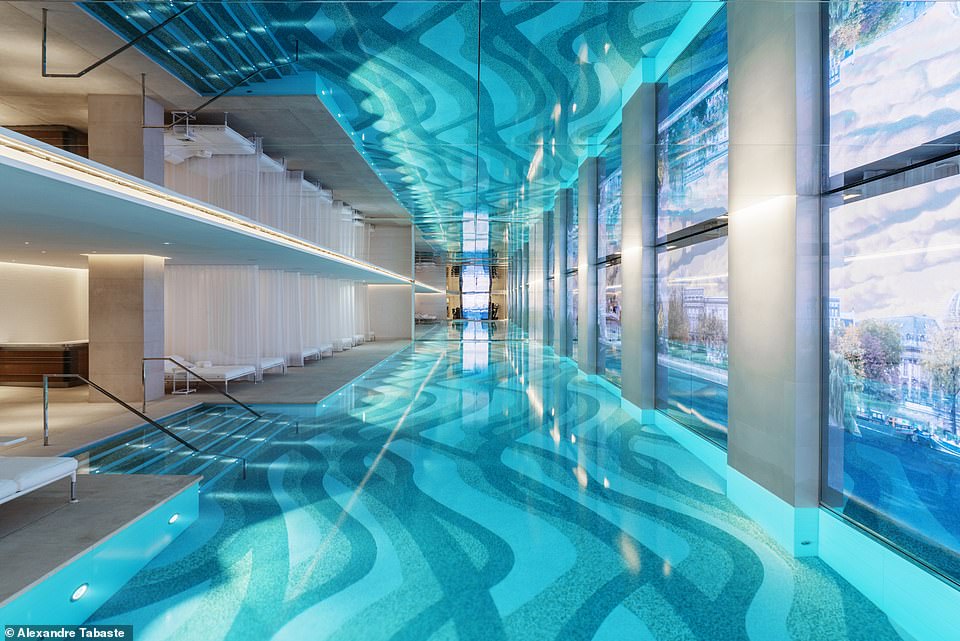 What happens once you fine-tune hospitality to the nth degree? Cheval Blanc Paris is one example. A hotel that’s kind of unimaginable to over-hype.

Before it opened last 12 months it was heralded as having ‘all of the magic ingredients to make it [2021’s] most fun hotel opening’. A press release – or something similar – that is issued to the press before plenty of hotel openings.

Only, on this instance, whoever rustled up that phrase was bang on the cash. And would have been justified tagging the phrase ‘it’ll blow your mind’ on the top.

Ted Thornhill checks into one among Cheval Blanc Paris’s 72 rooms and is wowed at every stage of his stay. Above is the astonishing indoor pool – the largest indoor hotel pool in Europe 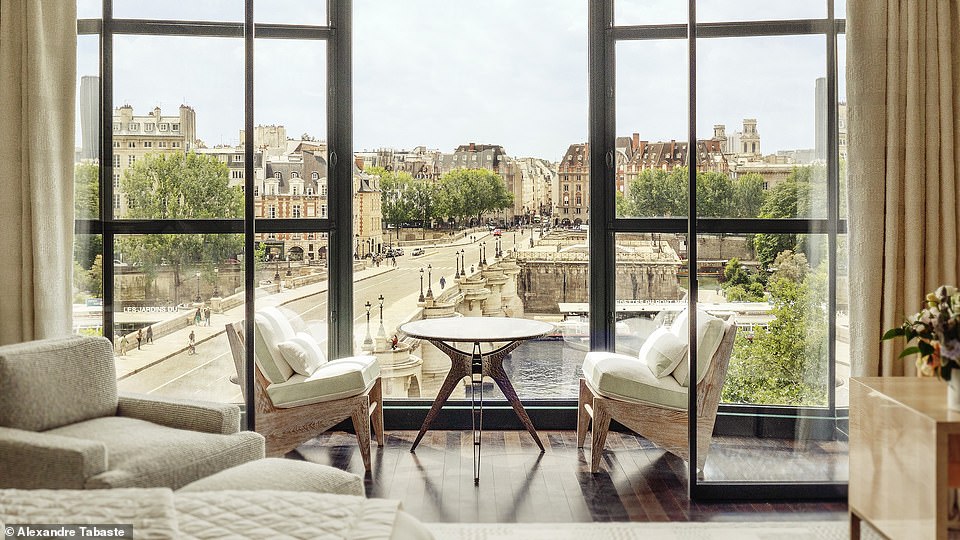 The rooms at Cheval Blanc offer mesmerising views of the Paris skyline and Ile de la Cite island, home to Notre-Dame Cathedral. The room above is of the kind Ted and his family check in to

This extraordinary property delivers on every level, from the breathtaking views and incredible location by the river Seine to the impeccable service, from the superb dining options to the sensational bedrooms and from the spoil-me-rotten Dior Spa that features the most important indoor hotel swimming pool in Europe to the way in which luxury oozes from every inch of the inside.

After which there’s the art – eye-catching throughout. Often museum-worthy.

The superlative-draining hotel, opposite Ile de la Cite island, is owned by French luxury goods behemoth LVMH and housed in an iconic Art Deco constructing that is also home to the corporate’s seven-storey La Samaritaine department store, which was reopened last 12 months (by President Macron, no less) after a shocking refurbishment. 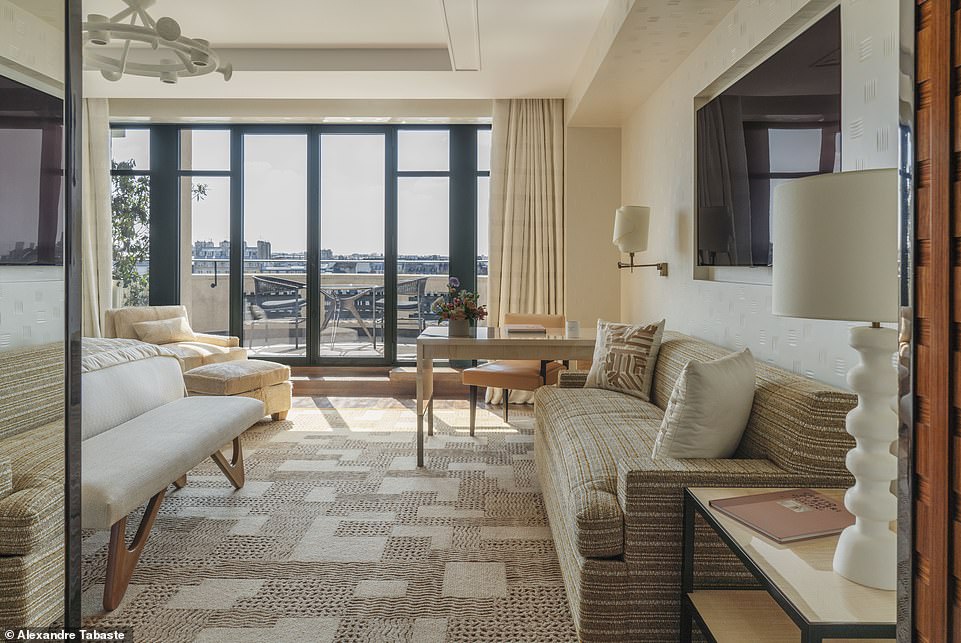 The ‘superlative-draining hotel’, is owned by French luxury goods behemoth LVMH and housed in an iconic Art Deco constructing 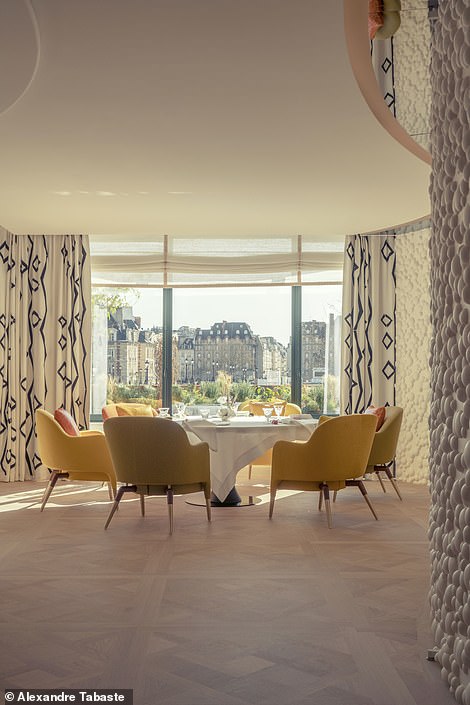 In total, LVMH spent €750m (£646million/$750million) on the restoration of the constructing, a project overseen by architect Edouard Francois, with the inside of the hotel reimagined by superstar U.S architect Peter Marino – whose CV includes the design of the flagship Louis Vuitton shop in Beverly Hills – within the variety of a Parisian residence, with help from over 600 craftspeople.

My partner, five-year-old daughter Emma and I arrive on the 72-room ‘Maison’ by taxi, with a small army of doormen opening the doors, whipping out our bags and easily ushering us inside to the showstopping double-storey marble-floored lobby.

Opposite the doorway above a cluster of sophisticated sofas and chairs are two 12ft-high pigment print artworks by Brazilian artist Vik Muniz depicting the Eiffel Tower, with a 21ft-long abstract by French artist Georges Mathieu hanging on the wall to the precise.

Flanking the art and framing the space as an entire are eight alluring 22ft-high gold-and-bronze screens, complemented by 22ft-high white-and-bronze-coloured curtains.

I half expect to see a guided-tour group assemble in front of all of it.

The receptionist who checks us in then shows us to our fifth-floor junior suite – a chamber of pure decadent opulence.

For the parents there is a divine king-sized bed swathed in silky smooth sheets and beautiful pillows and for the baby a camp bed also cocooned in luxurious bedding. And look, there is a toy cheval blanc (white horse) tied to a balloon waiting for her on top.

There’s also a sublime sofa, a walk-in closet smothered in polished wood boasting an unlimited array of drawers and cupboards and a fantastic bathroom wrapped in marble.

Here there’s an unlimited bath, walk-in shower that doubles as a steam room, twin sinks, a mirror that just about stretches wall to wall and deluxe and plentiful toiletries – including bath products by Dior perfumer Francois Demachy. 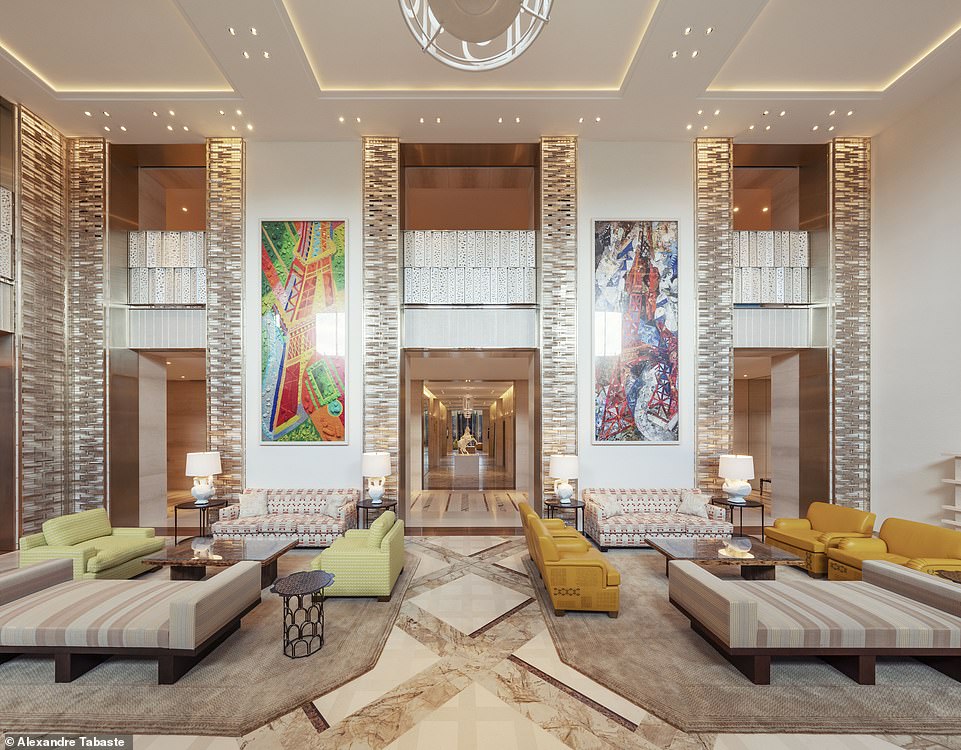 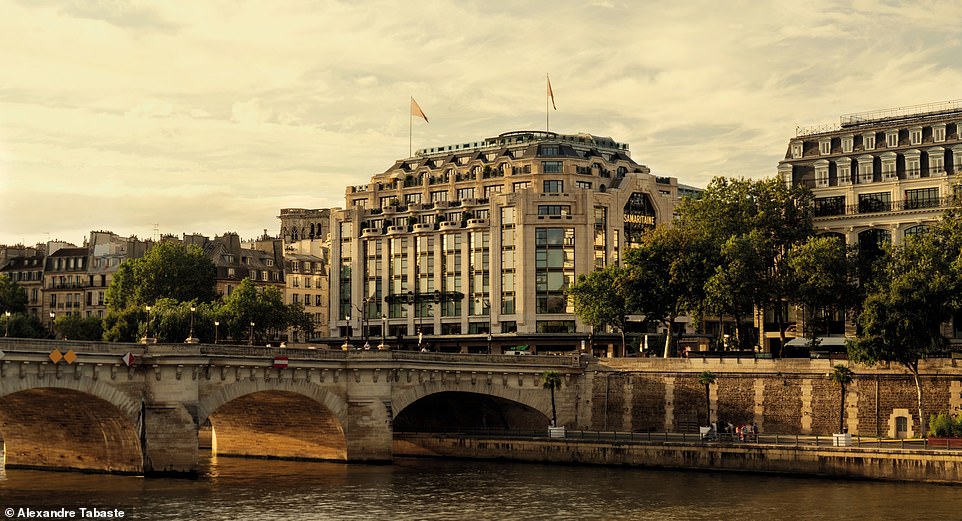 The constructing the hotel is housed in (above centre) can also be home to LVMH’s seven-storey La Samaritaine department store, which was reopened last 12 months (by President Macron, no less) after a shocking refurbishment

The layout, meanwhile, is semi-open-plan with the bathtub lying perpendicular to an enormous window. A blind lowers on the touch of a button for privacy, or you may leave it up and soak within the view.

And what a view.

The room extends out to an enclosed terrace complete with floor-to-ceiling windows (and bookended by mirrors for a wacky infinite-reflection effect) and two striking wood chairs angled towards one another. Beyond is the Pont Neuf bridge, which runs across the Ile de la Cite, home to Notre-Dame Cathedral.

After plonking ourselves on the chairs’ thick cushions we gaze transfixed on the bubbling activity below – cyclists and taxis stream across the bridge, glass-panelled tourist boats rammed with eager sightseers come and go, docking on the pontoon next to it. 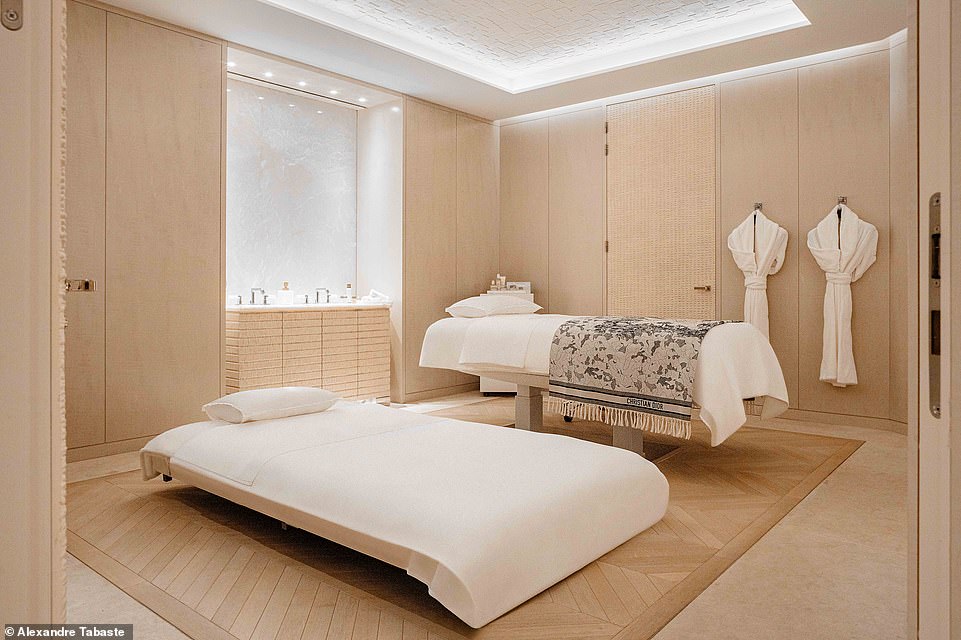 It’s a blinding room at a look, however the inventory has impressive details too.

For instance, the bedside lamps and central chandelier have been fashioned out of metal and plaster by sculpturer Philippe Anthonioz. They feature in every bedroom – however the designs are unique to every room.

And the soap is moulded in the form of the hotel and even carries the pattern of the distinctive facade.

This pattern is subtlety repeated within the rug, on the complimentary slippers, on the custom hand-crafted plaster wall opposite the bed and even within the little tray for the TV distant in the lavatory.

You will see it all around the hotel, in truth.

But we do not spot it within the amazing kid’s room – ‘Le Carrousel’ – a mini paradise Emma falls in love with.

It has two themes, garden and nautical – there are two fish tanks, including a spherical one inhabited by a jellyfish – and Emma submerges herself within the little kingdom with a babysitter while we parents ascend to the seventh floor for cocktails and dinner. 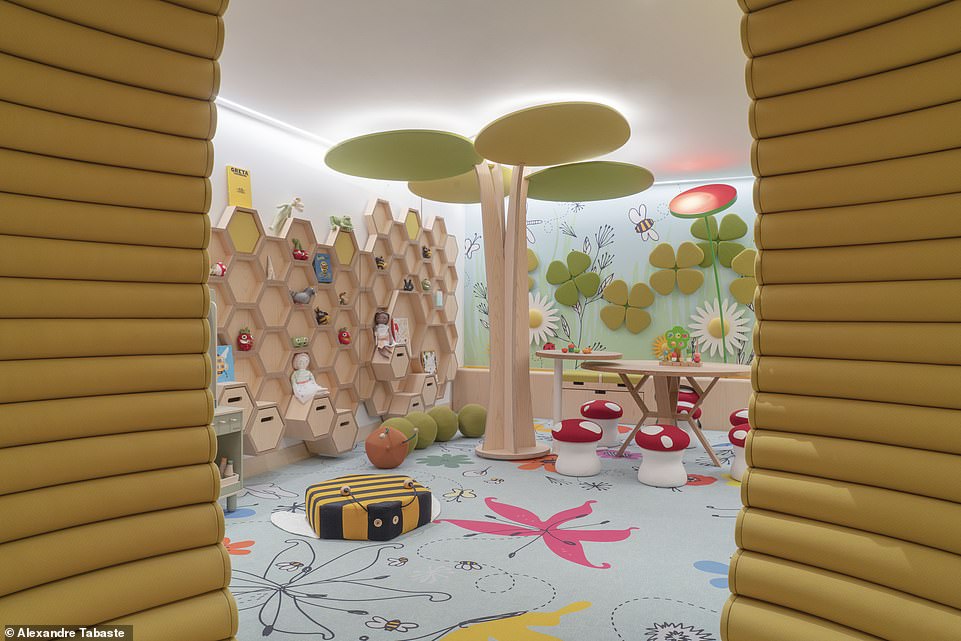 Our first stop is the summer garden panoramic terrace. There we sip on perfectly executed French 75 and Pisco Sour cocktails because the sun sets, gazing from our seats through an engineered gap within the perimeter hedge that enables for a view past the striking Saint-Germain-l’Auxerrois Gothic church round the corner and out to the Eiffel Tower.

This view is trumped half an hour later at restaurant Le Tout-Paris, just across the corner beyond the garden’s soothing grasses.

The hotel has three restaurants led by chef Arnaud Donckele, the three-Michelin-starred Plenitude, Italian eaterie Langosteria and our venue for the evening, which offers French cuisine in arrestingly chic surroundings.

Inside are chairs and banquettes in eye-catching orange, yellow, and red hues. But we’re led outside to one among the coveted tables positioned in alcoves that supply diners pinch-me views of the Seine and the skyline.

The cuisine is top-notch, the beverages delightful and the service, as at every stage of our stay – faultless. 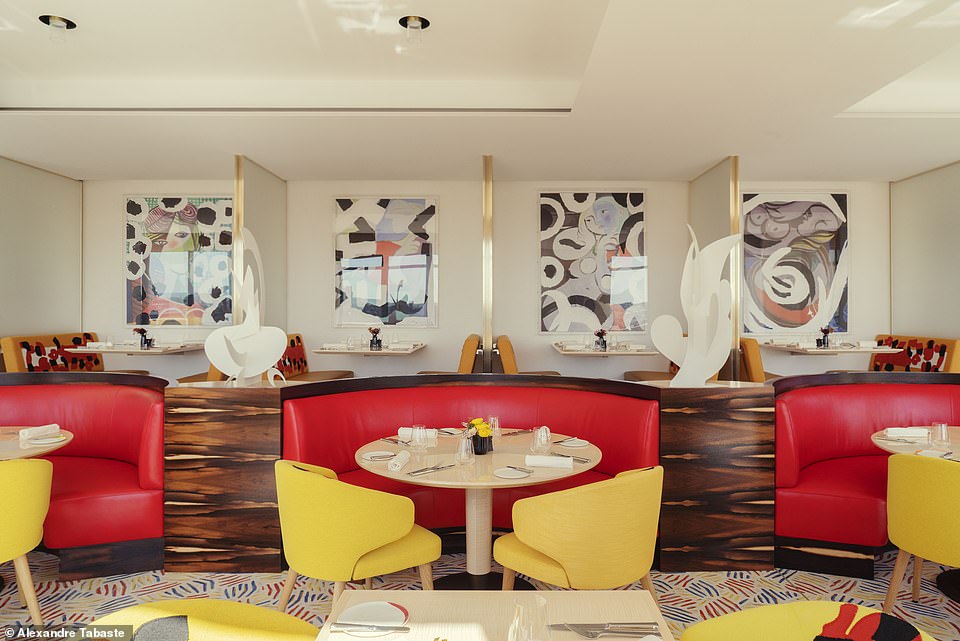 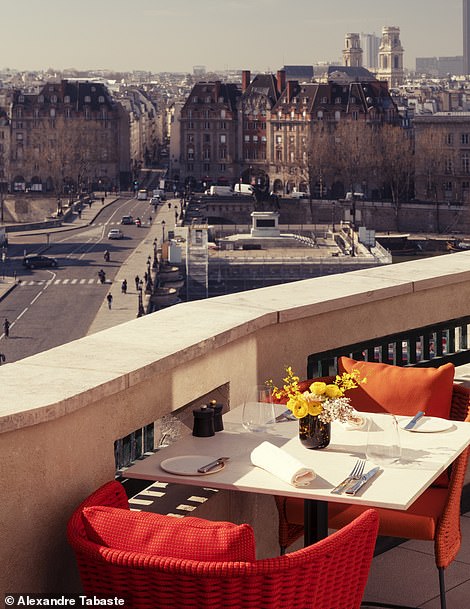 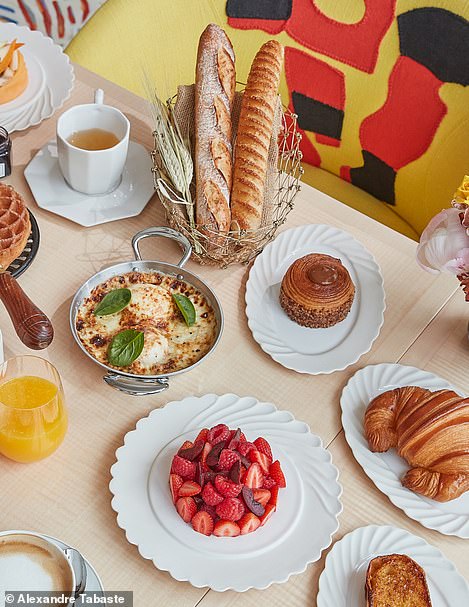 Ted’s Le Tout-Paris dinner table is outside (just like the above), affording him and his partner stunning views of the Seine and skyline. They return to the restaurant for breakfast – pictured right is a typical spread that is served up. ‘No guest is subjected to the toil of fetching food from a buffet,’ writes Ted

I start with crab and avocado pie (la tarte tourteau), go for beef with dauphine potatoes for mains and finish with Le Mille-Feuille.

My French partner insists that only the French know learn how to do patisserie ‘properly’. And he or she seems satisfied that her point has been made with my dish and her classic Paris-Brest.

Drinks-wise, we’re advised by the perky deputy head sommelier to begin with vintage Moet & Chandon Champagnes – a 2013 white and a 2012 rose, each excellent – then she delivers a 2015 Chateau d’Issan Margaux red followed by Kopke port.

The subsequent morning we’re back on the restaurant for breakfast, this time at a round table with a semi-circular banquette.

No guest is subjected to the toil of fetching food from a buffet. As a substitute, little bowls of fruit and a basket of pastries – including the final word pain au chocolat with the right crunch – are dropped at the table and orders for extras taken.

It’s an Eggs Benedict for me and a hot chocolate for the baby served in a cute little brass kettle.

Our stay is rounded off by a dip within the epic 30m- (98ft) long swimming pool, decorated with a fascinating wavy mosaic pattern on the ground and with moving images of the Seine playing on the partitions to generate the illusion you are swimming within the river.

Yet one more magic ingredient to make this one among 2021’s most fun latest hotels – and among the best hotels anywhere in 2022.

CONS: When you can afford it – none.