Is This the World’s Most Picturesque High Dive? 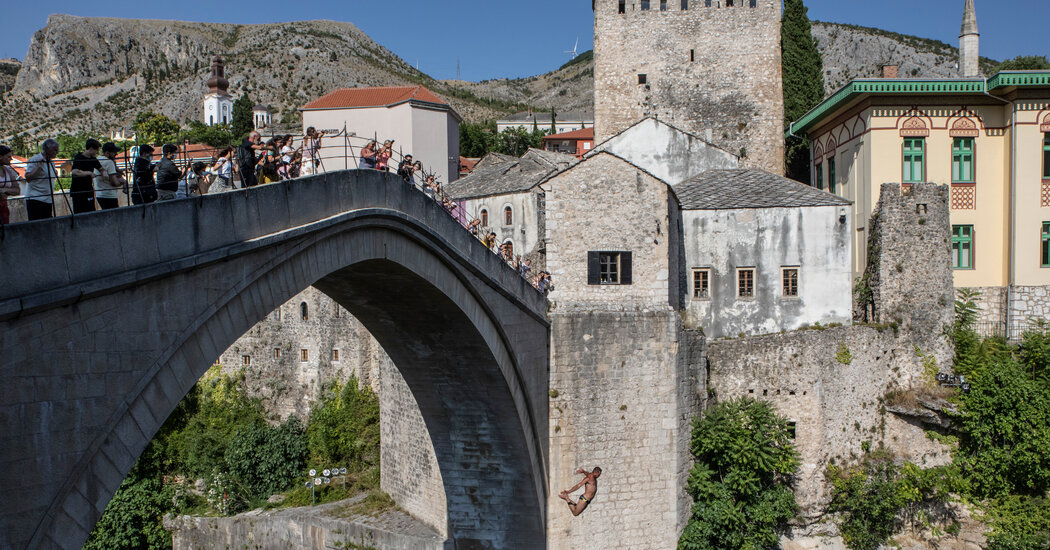 Balancing on the slippery, shimmering stones of the breathtaking bridge, with the cold waters of the Neretva River glistening far below, Amir Hanic pokes his nose up and takes his last breath. Without looking up or down, only straight ahead, he leaps from the bridge, his hands and feet stiff just like the outstretched wings of a swooping bird.

His descent lasts only a few seconds, however the audience surrounding him on the bridge has time to exclaim a collective “Ooh!” — a combination of admiration and fright. Amir disappears beneath the surface, then, reappearing, quickly swims back to shore, as if nothing had happened. Inside moments, he’s climbing back as much as the bridge.

Along with his plunge within the southern Bosnian city of Mostar, Amir and his friends from the local diving club are honoring a practice that goes back some 400 years — “to the Middle Ages, through the Ottoman era,” says Amir, wiping his face with a towel. “We’re protecting our cultural heritage and keeping the passage over the bridge clean.”

“We’re the guardians of the Mostar Bridge,” he adds.

The primary recorded dive from the bridge in Mostar — referred to as the Old Bridge, or Stari Most — took place within the seventeenth century, around 100 years after its construction. Since 1968, the town has held an annual summer diving competition, which attracts participants from all around the world.

Braving the drop of around 75 feet (it varies with the peak of the river), this extreme stunt requires a healthy dose of courage. But as Amir ascends from the river to the bridge, walking past the traditional stone stairs, the picturesque streets, the backdrop of musicians within the bazaar, he has one other task. With a hat in his hand, he collects donations from the gang of onlookers.

“I’m done with diving today,” he exclaims, still balancing on the sting of the bridge — but this time extending his arm toward the gang. “Now I even have to boost some money for our club.”

After I traveled to Bosnia with the photographer Alessio Mamo in July 2021, much of our trip took place within the shadow of the violence that tore through the region within the Nineteen Nineties, when, as Yugoslavia broke apart, war erupted between three ethnonationalist groups: Orthodox Christian Serbs, Catholic Croats and Bosniaks, or Bosnian Muslims.

Our first destination was the Srebrenica-Potocari Memorial, where we met a young generation of Bosnians, Serbians, Kosovars, Montenegrins and Macedonians who commemorated the brutal killing of about 8,000 Muslim men and boys by Bosnian Serb forces in July 1995.

We then drove to Sarajevo, the capital, and to Mostar, the bridge city.

Inside the last 12 months, many Bosnians have feared that the country was once more on the point of being torn apart, though imminent fears have now calmed. Still, the bridge divers in Mostar offer a welcome sense of distraction and wonderment. I had previously seen them featured in a documentary, however it was only after arriving at the attractive bridge that I could fully comprehend its architectural splendor and the worth — and audacity — of the diving tradition.

When the bridge was destroyed by relentless Croat shelling in 1993, the attack was a blow to the guts of the Bosnian Muslim culture, to which lots of the divers belong. As a way of continuous their traditions, a bunch of the divers used a makeshift gangway as a substitute platform.

Amir, who was 24 after I met him, was not even born then. But one other of the lads within the diving club, Admir Delic, was 18 years old on the time, and, seeing his peers diving from the platform, he felt compelled to hitch them — despite the risks.

“It was far more difficult and dangerous to dive from the gangway,” Admir tells me. “You needed to take a run-up, with the danger of getting hurt.” But even today, every dive remains to be a challenge, he says, requiring the utmost concentration.

There are days when Admir dives as many as 10 or 12 times, he says, in the height tourist season, between July and August. I speak with him during his break, while he sips coffee within the club’s lounge. Behind him on the wall are paintings and pictures of the bridge in several historical eras, and of divers during their marvelous feats.

“As a young man from Mostar, I almost felt obliged to dive,” he says. “Eventually, all of us males needed to do it, like a rite of passage. I’m amongst those that never stopped. It’s my job.”

Today’s Old Bridge is a duplicate. Its reconstruction, which made use of Ottoman-era techniques, was accomplished in 2004 — “a logo of reconciliation, international co-operation and of the coexistence of diverse cultural, ethnic and non secular communities,” in response to its entry on UNESCO’s World Heritage List.

Because the sunset approaches, it’s time for Admir’s last dive, before he returns home to his family. Amir, meanwhile, has already retired for the day. The young guardian, having yet again mustered the courage to dive, sits in a bar listening to some music, relaxing amid the bustle of a bunch of tourists.