ISIS Fighters’ Children Are Growing Up in a Desert Camp. What Will They Turn out to be? 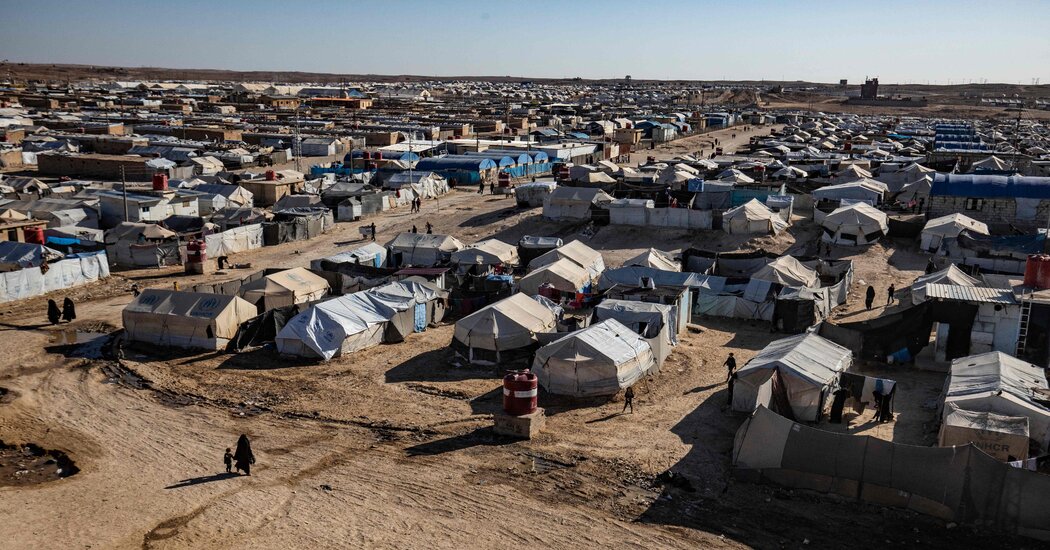 AL HOL, Syria — Viewed from a helicopter, this enormous camp that holds the wives and kids of dead or captured Islamic State fighters was a sea of white tents against the desolate landscape of drought-stricken northeastern Syria.

From the bottom, the human dimension of this tragedy got here into focus. As a convoy of armored vehicles made its way up a dusty road, children emerged to face on the fence amid garbage. Some waved. One boy, in a faded “Star Wars” shirt, stood with hands clasped behind his back. One other, in an oversize polo shirt, held aloft a star folded from paper.

Al Hol is a detention camp for people displaced by the ISIS war — guards don’t let residents walk out its gates. About 93 percent of the 55,000 people listed here are women and kids, about half under 12 years old. While most have Iraqi or Syrian moms, hundreds come from about 51 other countries, including European nations which have been reluctant to repatriate them.

The world’s attention has largely moved on for the reason that Islamic State’s last major enclave here crumbled in 2019. But left behind are tens of hundreds of youngsters growing up under brutal circumstances and intensely vulnerable to radicalization. They’re surrounded by hard-line, militant women; as boys grow into teenagers, they’re sometimes transferred to wartime prisons for fighters.

“We’ve seen the violence, and we also know that we have now an enormous population of youngsters which might be growing older,” said Daoud Ghaznawi, who oversees the administration of services within the camp by nongovernmental organizations alongside guards provided by a Kurdish-led militia that controls the region. “If this stays this manner, nothing good can come out of it.”

Rights groups and the military have been sounding the alarm in regards to the dangers of leaving the detained children of ISIS members to languish within the desert: Along with being cruel, the miserable conditions risk forging them right into a network of extremists numbed to violence and indignant on the world.

The camp for girls and kids is an element of a constellation of facilities in northeastern Syria overseen by the Kurdish-led militia that also includes nearly two dozen prisons holding some 10,000 adult men — suspected ISIS fighters who’ve proved even tougher to repatriate and pose the danger of breaking out.

In late 2018, Al Hol held about 10,000 refugees and others displaced by war. But early the following yr, because the American-backed coalition laid siege to Baghuz, the remaining ISIS stronghold, women and kids who fled or survived were separated from the boys and sent to Al Hol. Its population ballooned sevenfold.

For years, the State Department has urged countries to repatriate their residents, as the US did. Doing so is politically unpopular given the prisoners’ association with the Islamic State, and even their younger children are sometimes stigmatized as dangerous. But trickles of girls and kids have left.

Iraq, which has probably the most, goes slowly: Many Iraqis are hostile to allowing ISIS families to return. At a Middle East Institute conference last week, Timothy Betts, the State Department’s acting counterterrorism coordinator, said Iraq had repatriated about 600 ISIS fighters and a pair of,500 other people from Al Hol — a couple of tenth of its residents here and at a smaller detention camp.

This month, France repatriated 16 women and 35 children, including some orphans. About 165 French children and 65 women are said to stay. Many European countries are especially unwilling to take back men, fearing that under their legal systems, incarceration would last only a number of years.

Within the meantime, security is deteriorating inside Al Hol. There have been about 25 murders this yr. While the available data is imprecise, the pace of the killings has increased since late spring, including a murder last week and a lady who was found beheaded last month. Hard-core ISIS women, self-appointed as religious police, are presumed answerable for many killings as retaliation for transgressions like talking to the camp authorities.

A delegation on a fact-finding mission, led by Senator Lindsey Graham, Republican of South Carolina, visited the facilities in recent weeks, inviting a Latest York Times reporter on a rare tour by a senior American official.

The situation here could soon worsen. Turkey considers the Kurdish-led militia that controls northeastern Syria to be intertwined with a separatist terrorist group. The militia, referred to as the Syrian Democratic Forces, has been the US’ essential on-the-ground ally fighting ISIS in Syria.

Turkey, a NATO ally of the US, attacked the S.D.F. in 2019, destabilizing the delicate region; it has signaled an intention to accomplish that again soon.

Should there be one other Turkish incursion, American officials imagine a whole bunch of hundreds of individuals living within the border region could possibly be displaced, adding to the turmoil. In addition they fear that S.D.F. prison guards and a related internal security force at Al Hol would redeploy personnel to the front — as happened in 2019 — and will lose control of ISIS detainees.

“If a Turkish attack in actual fact comes down, we’re going to potentially have ISIS 2.0,” Brig. Gen. Claude K. Tudor Jr. of the Air Force, the commander of the Special Operations task force working to defeat ISIS in Iraq and Syria, said during a helicopter flight accompanying Mr. Graham into Syria.

Warning that militants could attempt to regroup via mass prison breakouts, he added, “We predict ISIS is trying to attack one other prison or do something in Al Hol.”

The S.D.F.’s control is already tenuous. Standing within the sweltering sun on the rooftop of a jail administration constructing in nearby Hasaka, General Amuda, the pinnacle of an S.D.F. commando unit that could be a designated partner force of the US and who uses a pseudonym, described a notorious ISIS attack there in January.

A two-week battle ensued, killing dozens of S.D.F. guards and a whole bunch of ISIS detainees and fighters. He recounted the assault in vivid detail, pointing to bullet-riddled buildings and a spot where he said militants had burned two guards alive.

Afterward, because the American military sought to find out who had been killed or escaped, it became clear that the militia didn’t have comprehensive records about its detainees. The Hasaka inmates also included a whole bunch of teenage boys apparently culled from Al Hol as they grew up; other teens have been sent to rehabilitation centers said to lack sufficient capability.

“That the militia on top of things doesn’t have a very accurate picture of what is occurring tells you what you want to know,” said Charles Lister, the director of the Syria and Countering Terrorism and Extremism programs on the Middle East Institute. “We’re doing nothing to stop the present generation of detainees from wanting to proceed to fight in the event that they get out, and making a melting pot for the following generation.”

Dr. Abdulkarim Omar, the regional administration’s foreign relations head, said indoctrinated children who reached 12 to 14 years old should be separated because they might pose threats or produce babies for ISIS. He denied that teenagers who were sent to prisons because there was no room at rehabilitation centers were housed with battle-hardened adults.

Nearly all of those 2,000 come from countries within the Middle East or North Africa, including Tunisia, Morocco, Algeria and Saudi Arabia. About 300 are Russian, while greater than 250 come from Western and European countries, officials said.

Al Hol is similarly divided. The essential camp holds about 47,000 Syrians and Iraqis. An annex holds 8,000 wives and kids of ISIS fighters from other countries. About 66 babies were born every month last yr, they said.

In 2022, the US military is about to spend $155 million in Syria to coach and equip the S.D.F., together with related work like bolstering ISIS prisons. The State Department and U.S. Agency for International Development plan to spend $852 million on humanitarian assistance in Syria and support to refugees in nearby countries.

Pentagon funds have helped pay for guards and infrastructure, including metal detectors at Al Hol, and internal fences are expected to be built this month to permit guards to shut off areas in a riot or after raids to filter out smuggled weapons. The American military can also be logging biometric data, like DNA, of the adult male prisoners.

In Hasaka, Maj. Gen. John W. Brennan Jr., the commander of the anti-ISIS task force in Iraq and Syria, said that nations unwilling to repatriate their ISIS residents should a minimum of pay the S.D.F. for housing them.

Mr. Graham also suggested that the United Nations could create a global tribunal to prosecute Syrian ISIS members; the breakaway region is just not a recognized sovereign nation with a legal system. But he noted that folks had floated the identical ideas during an identical visit 4 years ago and compared the situation to false calm after World War I.

“Most individuals think the war with ISIS is over,” Mr. Graham said. “They don’t take into consideration the way you repair the damage. What do you do with the prisoners? How do you give young people higher options? That’s why they offer wars numbers — they simply keep repeating.”

Most youngsters at Al Hol don’t attend school — there aren’t enough of them, and a few women refuse to let their offspring go. Mr. Ghaznawi said two schools were recently forced to shut; that they had stopped hiring camp residents as support staff, he said, and were repeatedly attacked.

Kathryn Achilles, the advocacy, media and communications director for Syria for Save the Children, said it operates six “temporary learning spaces” at Al Hol, including one it recently rebuilt after it was set on fire. They teach a basic curriculum of English, Arabic, math and science. However the growing violence, she said, is further traumatizing the youngsters.

“These kids didn’t decide to go to Syria or to be born there, and so they are trapped on this cycle of violence that’s punishing them for the sins, or perceived sins, of their fathers,” she said. “The S.D.F. has been left with the responsibility of holding these people. These children are caught within the system, but what they need is to be returned home.”

Linking improved camp security to quality of life, Mr. Ghaznawi downplayed incidents by which children at Al Hol threw stones at reporters as restless children acting out, but added that it could turn into worse.

“Now we have a young population that’s going to get older and older,” he said, “and going to go from having violent acts to eventually having an increasing number of ideological affiliations with ISIS.”