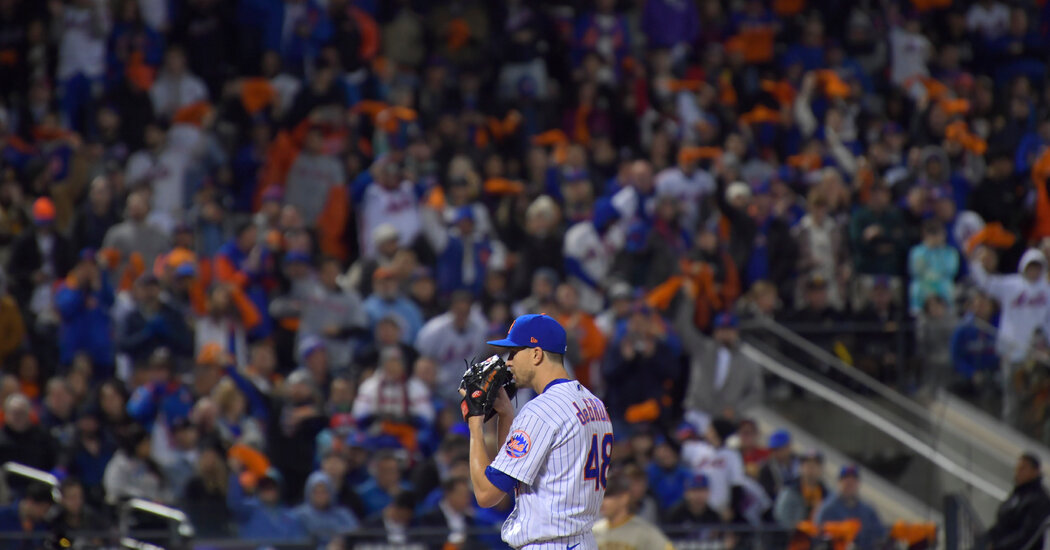 Despite an elbow injury last 12 months, Jacob deGrom was the most effective pitcher in baseball from 2018 through 2021 based on several measures. His earned run average of 1.94 during that span was markedly lower than anyone else’s in baseball. He won the National League Cy Young Award in 2018 and 2019, and finish third for the prize in 2020.

But during that period, the Mets made zero trips to the postseason, fueling a sentiment amongst fans — and inside the team — that the prime years of deGrom’s profession were being wasted. This 12 months was the ultimate guaranteed likelihood to make a playoff run with deGrom, who, despite his stated love of the Mets, has repeatedly said he’ll exercise the opt-out clause in his contract extension this winter.

Given the prospect to pitch within the postseason for the primary time in seven years, deGrom saved the Mets’ season for yet one more day. Facing elimination within the best-of-three wild-card series against the San Diego Padres, deGrom delivered six strong innings and the Mets’ offense got here to life in a 7-3 win on Saturday night that evened the series. He wasn’t his sharpest however it was enough to force a decisive Game 3.

The Mets’ season — and the Padres’, for that matter — now comes all the way down to Sunday. Chris Bassitt, the Mets’ most durable starting pitcher throughout the regular season, will face off against Joe Musgrove, the All-Star who led the Padres rotation with a 2.93 E.RA.

The prize? Facing the Los Angeles Dodgers, the most effective team in baseball and winners of 111 regular-season games, in a best-of-five division series starting on Tuesday at Dodger Stadium.

To beat the Padres on Saturday, the Mets relied on their cornerstone players: shortstop Francisco Lindor, first baseman Pete Alonso, second baseman Jeff McNeil and deGrom. Lindor and Alonso each homered, while McNeil, the N.L. batting champion, broke the sport open with a two-run double within the seventh inning. The Mets’ bullpen — led by closer Edwin Díaz, who was called upon when it was a one-run game — provided stout relief.

But the majority of the sport belonged to deGrom, 34, who struck out eight. Injuries derailed his past two seasons. When he returned from a shoulder injury in Aug. 2, it was his first start in the key leagues in 13 months. He helped the Mets over the ultimate two months of the regular season and Saturday was the primary time he pitched on the game’s biggest stage, the postseason, since Game 2 of the 2015 World Series, which the Mets lost to the Kansas City Royals.

Against the Padres, deGrom got here out firing. Ten of the 12 pitches he threw in the primary inning were 100 miles per hour or more. Padres right fielder Juan Soto fell over swinging at a 101-m.p.h. pitch and eventually struck out on a 102-m.p.h. fastball, causing the sellout crowd of 42,156 to roar.

The identical energy continued into the underside half of the frame. Lindor gave his team a 1-0 lead with a solo blast off Padres starting pitcher Blake Snell. The following few innings seesawed between deGrom and Snell. DeGrom, at times, wasn’t as dominant because the game progressed but he used strikeouts or induced groundouts to flee jams, allowing his team’s offense to interrupt through.

The Padres tied the rating within the third inning when Trent Grisham, one in all the Padres’ heroes in Game 1, homered. After posting a .184 average and a .341 slugging percentage throughout the regular season, Grisham has now sent balls over the fence against two of the most effective pitchers in baseball — Max Scherzer and deGrom — on back to back nights.

The Mets pulled ahead, 2-1, within the fourth inning once they took advantage of Snell’s wildness; he walked six over three and one-third innings. After third baseman Eduardo Escobar and designated hitter Darin Ruf walked, Mets center fielder Brandon Nimmo’s third hit of the night was an opposite-field run-scoring single.

However the lead didn’t last long. DeGrom allowed the Padres to tie the rating at 2 when he walked Grisham and Jurickson Profar sneaked a ball fair down the primary final analysis for a run-scoring single.

The Mets quickly recovered and retook the lead. To begin the underside of the fifth inning, Alonso slammed the primary pitch he saw from reliever Nick Martinez into the left field seats for a 3-2 lead. Alonso, who led the Mets with 40 home runs and tied Aaron Judge for the key league lead with 131 runs batted in, waved his arms and prompted the gang to make more noise after he crossed home plate.

After deGrom exited the sport, Mets Manager Buck Showalter summoned Díaz sooner than usual, within the seventh inning. However the Mets offense gave him respiratory room with a four-run outburst. After a single by Lindor and walks by left fielder Mark Canha and Alonso, McNeil drilled his key hit and flexed his arms toward his teammates from second base. DeGrom watched from the dugout.

Adam Ottavino took over for Díaz with one out within the eighth inning, and proceeded to jangle some nerves by issuing a bases-loaded walk with two outs within the ninth. But Seth Lugo got here in and retired Josh Bell to finish the sport with none further damage.

Now so as to get deGrom one other postseason start, and keep playing in October, the Mets need one other win on Sunday.