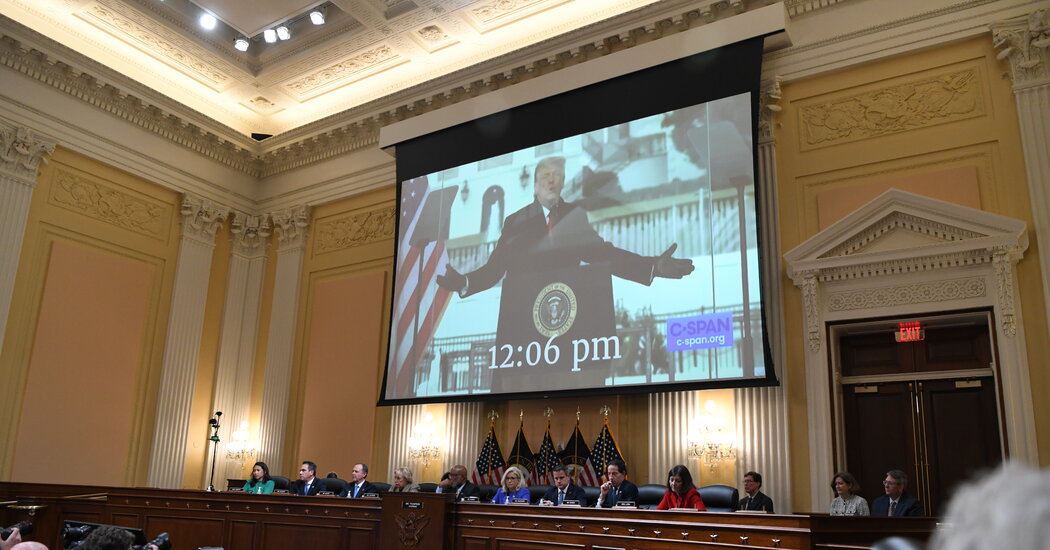 Unlike a lot of their fellow Trump supporters, the Proud Boys didn’t show up for Mr. Trump’s address near the White House on Jan. 6. As a substitute, they assembled on the Washington Monument around 10 a.m., in keeping with one in every of the committee’s live witnesses, Nick Quested, a documentary filmmaker who was embedded with the group that day.

About 200 members of the group gathered that morning, Mr. Quested said, and marched through the town streets, arriving on the Peace Circle on the west side of the Capitol at shortly before 1 p.m., just minutes before lawmakers contained in the constructing were set to start a ceremonial proceeding to certify the election. Mr. Quested said he was surprised by the Proud Boys’ anger and profanity because the larger crowd around them turned, as he put it, “from protesters to rioters to insurrectionists.”

One other witness on the Peace Circle was Officer Edwards, who testified about being in the midst of the primary breach of the Capitol grounds. Ms. Edwards described how a Proud Boys leader named Joseph Biggs encouraged one other man to approach the bike rack barricade where she was posted. That man, Ryan Samsel, she said, pushed the bike rack over, causing her to hit her head and lose consciousness.

But before she blacked out, Ms. Edwards recalled seeing “a war scene” playing out in front of her. Cops were bleeding and throwing up, she recalled.

Reprising the theme of the police standing as much as defend democracy that day while Mr. Trump did nothing to call off the mob he had incited, Representative Bennie Thompson, Democrat of Mississippi and the chairman of the committee, apologized to Ms. Edwards for the ordeal she suffered.

“It’s unlucky that you just needed to defend the Capitol from fellow Americans,” Mr. Thompson said.

Whilst all of this was unfolding, Mr. Trump, watching from the White House, believed his supporters within the mob were “doing what they ought to be doing,” Ms. Cheney said.