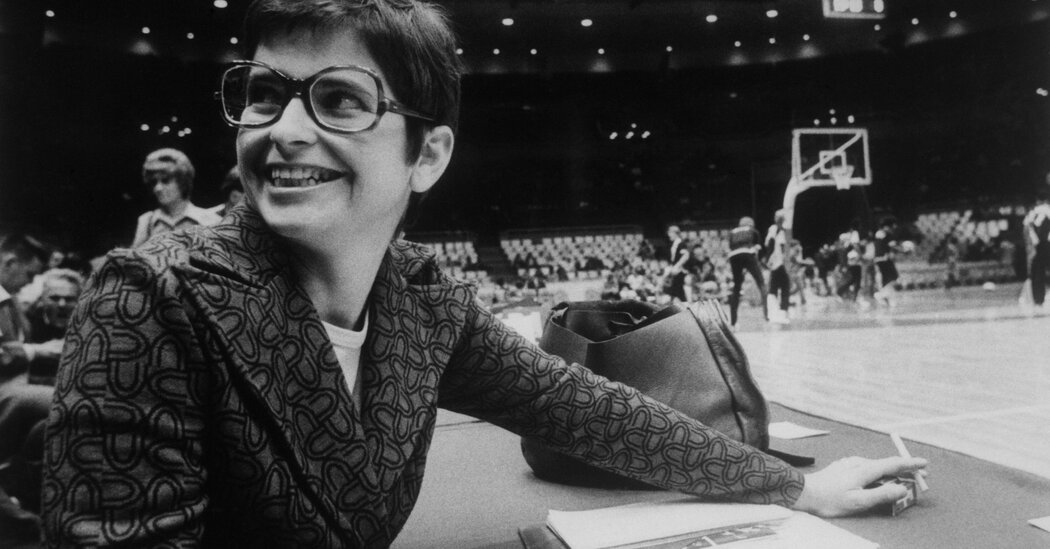 Jane Gross, who in 1975 became the primary female sportswriter known to have entered knowledgeable basketball locker room, and who later distinguished herself at The Latest York Times together with her compassionate reporting on aging and a well-received book about her mother’s decline in a nursing home, died on Wednesday within the Bronx. She was 75.

Her death, at the identical Riverdale nursing home through which her mother had died, was attributable to a traumatic brain injury after a series of falls, said Michael Gross, her brother and only immediate survivor.

Ms. Gross joined the Long Island newspaper Newsday to cover pro basketball in 1975, at a time when sports teams were reluctant to open their clubhouses and locker rooms to female journalists. Most players viewed the prospect of ladies asking them questions at their lockers as an intrusion on their inner sanctums. Though male reporters were welcomed, female reporters had to attend in hallways for teams to bring them players to interview.

But in February 1975, Ms. Gross asked Red Holzman, the coach of the Latest York Knicks, to let her into the team’s locker room after a game at Madison Square Garden. He agreed, and a barrier was broken.

A month later, with Ms. Gross searching for to interview members of the Latest York Nets of the American Basketball Association (now the Brooklyn Nets of the N.B.A.) after a loss, the team took a vote on whether to confess her. The vote failed, but after a victory the following day, they voted her in. 4 other A.B.A. teams soon complied.

It was not until the late Nineteen Seventies that the N.B.A. instituted a policy mandating that girls be permitted to work in locker rooms. It took a number of more years for all of the league’s teams to be in compliance.

Ms. Gross said that when she first entered a locker room, she was “scared stiff.”

“But I started to comprehend what a fellow sportswriter at Newsday had told me,” she was quoted as saying in a 1976 profile by the Newspaper Enterprise Association, “that you simply really can’t get the flavour of the players without seeing them within the locker room and the camaraderie they share.”

She added: “It’s a wonderful thing, the closeness and lack of inhibition after great physical exercise. Most girls rarely experience it.”

In 2018, when she received an award from the Association for Women in Sports Media, Ms. Gross recalled the indignities she faced once she had entered locker rooms and clubhouses. One baseball player, Dave Kingman, poured a bucket of water on her, and she or he once had spaghetti and meatballs thrown at her. But she also spoke of the gratitude she felt when girls sent her notes thanking her for setting an example.

“They wrote of reading my stories on microfilm and feeling the world open up,” she said.

Ms. Gross was one in all the pioneering female sportswriters featured in “Let Them Wear Towels,” a 2013 ESPN documentary.

She moved to The Times as a sportswriter in 1979, but she spent most of her nearly three a long time with the paper on the Metropolitan, National and Styles desks. Amongst the topics she wrote about were the AIDS crisis, abortion, Alzheimer’s disease and the 1989 San Francisco earthquake.

“People tended to underestimate her, and she or he welcomed it,” Jonathan Landman, a former Times editor who worked with Ms. Gross on the National desk, said in a phone interview. “She played the role of somebody emotional, and never too tough, but she was as rigorous and tough-minded a reporter as anyone.”

Ms. Gross had a status for quickly inspiring trust and persuading reluctant people to talk candidly to her. In 1989, at a Planned Parenthood clinic in San Mateo County, Calif., she interviewed seven women — some before having an abortion, some afterward. Certainly one of them, a 32-year-old Scottish-born woman, told Ms. Gross that she had felt pressured into the one-night stand that led to her pregnancy.

“I got caught within the doors of bad luck,” she said. “Now I feel guilty, terribly guilty, because at my age you need to have more sense.” She added, “I’m still wrestling with whether that is murder or not.”

Her mother’s medical decline from 2000 to 2003 inspired Ms. Gross to start out reporting about aging and the challenges faced by baby boomers in caring for his or her parents. It became her distinct beat at The Times. In 2008, she began a blog, The Latest Old Age, which covered various dimensions of aging and caregiving.

In an early blog post, Ms. Gross described marking the fifth anniversary of her mother’s death not on the cemetery but on the Hebrew Home for the Aged in Riverdale, where her mother spent her final two years.

“My happiest times with my mother were spent here,” she wrote. “Despite the unavoidable institutional odors, the unpredictable rantings of demented residents, the ‘feeders’ spooning mush into the mouths of once capable men and girls, the row upon row of wheelchairs within the TV lounge, on this nursing home my mother and I had a chance to know and love one another in a way we never had before.”

Her reporting on aging led to the book “A Bittersweet Season: Caring for Our Aging Parents — and Ourselves” (2011), which combined her personal narrative with practical advice.

“A few of her admonitions are Ancient Mariner-style harrowing, each concerning the nature of aging itself and the bureaucratic horrors of Medicare and Medicaid,” Kate Tuttle wrote in her review in The Boston Globe. “This is hard stuff, and Gross writes movingly concerning the toll it takes on her and other caregivers.”

Jane Lee Gross was born on Sept. 10, 1947, in Manhattan. Her father, Milton Gross, was a syndicated sports columnist for The Latest York Post. Her mother, Estelle (Murov) Gross, was a nurse. From an early age, Jane was enamored of the sports world that her father covered, and she or he and her younger brother would sometimes accompany him on his assignments and sit within the press box.

“Jane grew up in Toots Shor’s” — the Manhattan saloon known for its sports and entertainment denizens — “Madison Square Garden, Yankee Stadium and the Polo Grounds,” said Michael Gross, who can be a author.

After graduating from Skidmore College in 1969 with a bachelor’s degree in literature, Ms. Gross was hired as a researcher by Sports Illustrated. She soon encountered sexism when the Knicks refused to let her ride within the team bus while she was working on a season preview for the magazine.

“As a member of the working press, she was unexpectedly stashed farther from the motion than she had been since she was two,” the magazine’s publisher on the time, John Meyers, wrote, acknowledging how long and closely Ms. Gross had watched the Knicks since her father had taken her to games in childhood.

She spent six years at Sports Illustrated and joined The Times after a four-year stint at Newsday. She remained with the paper until 2008, apart from an interlude with The Los Angeles Times as its urban affairs correspondent from 1994 to 1996. She had lived in Manhattan until entering the nursing home.

Throughout the AIDS crisis, Ms. Gross was on the front lines. In a single article, in 1987, she wrote about parts of Latest York City where death had turn into the main target of on a regular basis life.

“Along the tree-lined streets of Greenwich Village where vibrant young men have already lost two friends or 4 or six,” she wrote, “a passing hearse routinely signals the death of somebody in his prime.

“Within the tenements and housing projects of Harlem or the South Bronx, where violence and drug addiction have all the time snatched the young, moms now grieve for youngsters who they are saying died of pneumonia or leukemia or any of the diseases which might be euphemisms for acquired immune deficiency syndrome.”