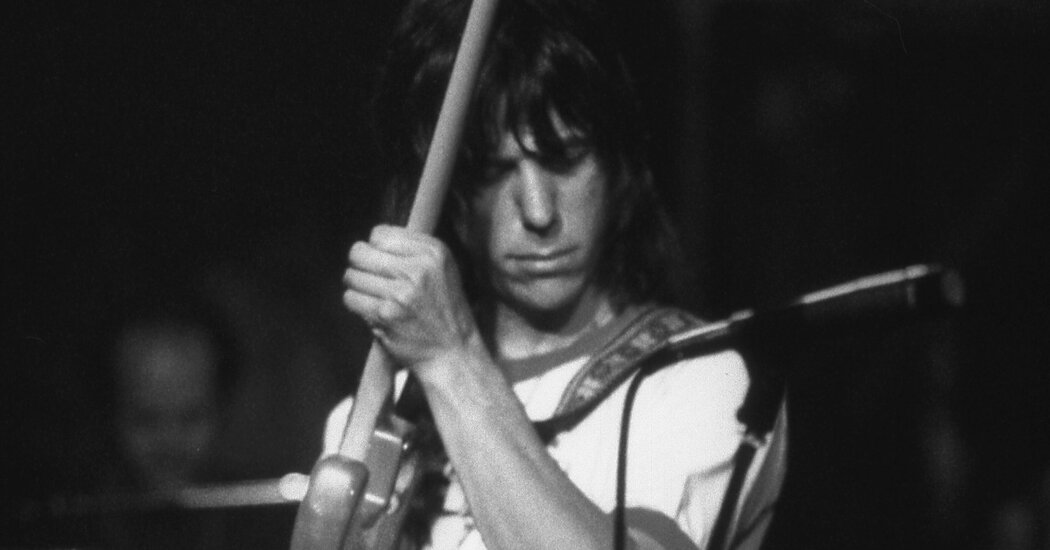 Songs could barely contain Jeff Beck’s guitar. It jabbed at tunes with brute-force riffs. It sparred with singers for the highlight. It clawed at the boundaries of verses and choruses, screaming melodies of its own, making notes slide and wriggle; sometimes it scraped out funky, contentious rhythm chords.

Yet in quieter moments, Beck’s guitar may be startlingly tender, cherishing a melody or proffering teasing, insinuating undercurrents. Beck, who died on Tuesday at 78, was also a master of electrical guitar tones, of amplification and distortion. He could make his Stratocaster sound icy, searing, slashing and otherworldly in the midst of a single track.

With a profession that began through the British Invasion, Beck at first tucked his guitar work into songs aimed for pop radio. But by the tip of the Nineteen Sixties, he was leading his own groups, backing his lead singers with roiling, slamming arrangements that made them shout to maintain up; he was blasting his way toward metal. Beck’s instrumentals moved to the forefront within the Seventies, as his material shifted toward jazz-rock. But he never left behind the blues and rockabilly that had inspired him from the beginning.

Here, in chronological order, are 10 tracks that reveal Beck’s range and intensity.

The pushy, up-and-down, Eastern-tinged guitar line that opens the song, and the squirming guitar riff behind the chorus, turn this track from jaunty British Invasion pop into something way more urgent. Beck’s lead guitar takes over for the complete last minute, melding rockabilly and something like raga, leaving the remaining of the band to whoop along.

Beck’s supercharged remake of a Yardbirds song has Rod Stewart on vocals and a churning, whipsawing arrangement that rivals anything from contemporaries just like the Who. The song gallops from the get-go, as Beck answers his own power chords with countermelodies high and low. The bridge rockets into double time, and after the ultimate verse the band stages a neat slow-motion collapse.

Beck and Stevie Wonder shared songs and appeared on each others’ albums within the Seventies, and “Lookin’ for One other Pure Love” from Wonder’s “Talking Book” featured the guitarist at his most sweetly melodic within the song’s bridge. His solo eases as much as a high note after which casually trickles down, continuing through the track to garland Wonder’s vocals with little slides and curlicues, reveling within the song’s sophisticated chord progression.

Beck’s best-known ballad is an instrumental version of a Wonder song. He plays it with long-lined phrases and continually changing nuances of tone: as a dialogue, as a keening lament, as bitter self-accusations, as an anguished plea, as a fragile likelihood at hope. From start to complete, it sings.

Written by Max Middleton, then the keyboardist in Beck’s band, “Freeway Jam” is a brisk shuffle that materializes and fades out as if it’s excerpted from a jam session, though parts are clearly mapped out. It gives Beck room to peal some clarion melodies after which attack them with trills, bent notes, blues licks and dissonances. A live version featuring the keyboardist Jan Hammer, released in 1977, makes the tune much more gleefully frenetic.

Rod Stewart rejoined Beck for a remake of the Curtis Mayfield gospel-soul standard, “People Get Ready,” that starts out restrained but grows fervid. Beck offers a stately, fanfare-like guitar hook after the primary verse, then engages Stewart increasingly: taking up the melody with note-bending variations, surging up from below, goading Stewart to shout and leap into falsetto. Despite its dated Eighties production, the song finds the spirit.

Could a player as physical as Beck handle the mechanical drive of electronica? In fact. A tireless programmed drumbeat drives “THX 138,” but Beck rides it in multiple ways: with an Eastern-tinged modal loop, with sustained power chords, with high blues lines, with ferocious stereo call-and-response chords, with a melody that leaps skyward. For all of the gadgetry, human hands dominate this mix.

Before he formed Led Zeppelin, Jimmy Page was Jeff Beck’s colead guitarist, after which his successor, within the Yardbirds. In 1966 they collaborated to record “Beck’s Bolero,” written by Page, for Beck’s first solo single. This gracious latter-day reunion for the Rock & Roll Hall of Fame is noisy, flashy, virtuosic and excessive in precisely the correct proportions.

For all his speed and dexterity, Beck never underestimated the great thing about a sustained melody. He played this Hollywood standard backed by chords from a string orchestra, sliding through the tune, holding back some notes and using tremolo on others, making every turn of the familiar song sound like a precious discovery.