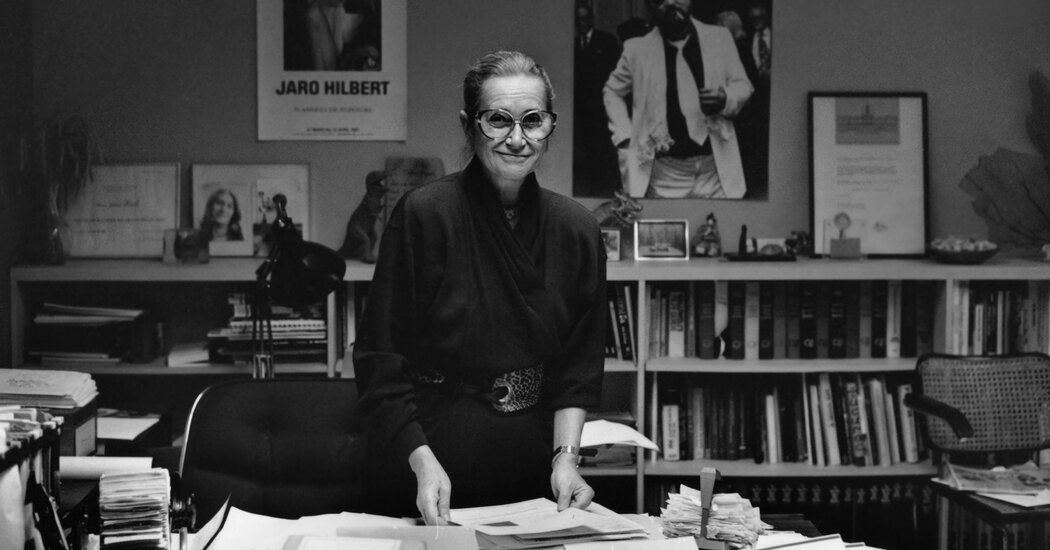 Joanne Koch, the longtime head of the Film Society of Lincoln Center, who stared down picketers and, at times, government and church authorities to present controversial works by the likes of Godard, Scorsese and Oshima while presiding over the Latest York Film Festival, and who oversaw the creation of the middle’s own temple for cineastes, the Walter Reade Theater, died on Aug. 16 at her apartment in Manhattan. She was 92.

Her daughter, Andrea Godbout, said the cause was aortic stenosis.

A lifelong defender of artistic freedom, the Brooklyn-born Ms. Koch (pronounced “coke”) served because the Film Society’s executive director over greater than a quarter-century of change and growth, starting in 1977. (She was not related to David H. Koch, the oil magnate whose name adorns the ballet theater at Lincoln Center).

In 1973, she helped create the film festival’s Latest Directors/Latest Movies series, which showcases the work of emerging directors and has included the work of Spike Lee, Pedro Almodóvar and Wim Wenders. She also helped produce 19 of the society’s celebrity-studded gala tributes to film luminaries including Fred Astaire, Laurence Olivier and Audrey Hepburn, in addition to spearheading the acquisition in 1974 of the influential critical journal Film Comment, where she served as publisher.

Because the society’s chief financial officer, she helped raise funds and coordinate the design for the Walter Reade Theater, which opened in the middle’s Rose Constructing in 1991 as a sanctuary for independent and foreign movies at a time when the VHS revolution was imperiling many repertory film houses.

“Her passion was at all times to construct latest audiences for movies and supply them superior venues for moviegoing,” said Wendy Keys, a board member and former executive producer of programming for Film at Lincoln Center, because the society is now known. “She wasn’t only a dollars-and-cents person. She was driven by her great love of film.”

Her most visible role, nevertheless, was managing the distinguished Latest York Film Festival. At a time when competing film festivals in North America were exploding, she helped it maintain its international prominence — and its strictly curated format.

“We might fight like cats and dogs over every film we showed,” Ms. Keys, a former member of the choice committee, said in a phone interview. “We at all times considered ourselves to be presenting each of our 25 movies on a velvet cushion, versus showing greater than 350 movies, which is what a whole lot of other festivals do.”

That notorious film created a buzz in Latest York cultural circles, Ms. Keys recalled, with notables like John Lennon and Yoko Ono scheduled to attend the premiere at Alice Tully Hall. But then federal customs and Treasury officials, after seeing the film at a press screening, threatened seizure and legal motion if the film society showed it.

The film was cleared in court, and Ms. Koch invited the unique audience, which had been turned away, to a screening on the Museum of Modern Art a couple of months later. “She thought that nothing ought to be avoided, whether it was too violent or explicitly sexual or anti-religious,” Ms. Keys said. “That was very deep to her core. She was a provocateur.”

The firestorm was far greater in 1985, when the festival scheduled a premiere of “Hail Mary,” a movie by Jean-Luc Godard that imagined the Virgin Mary as a modern-day young woman who worked at a gas station. Greater than 5,000 protesters, some toting candles, turned out on the screening, in response to an essay by the philosopher Stanley Cavell within the 1993 anthology “Jean-Luc Godard’s Hail Mary: Women and the Sacred in Film.” The rector of a seminary in Connecticut warned, “When the bombs fall on Manhattan, one will especially fall on the cinema where this film is being shown.”

“The film shouldn’t be anti-Catholic,” Mr. Cavell quoted Ms. Koch as saying. “We don’t mean to offend — definitely that was not our intent — but we feel strongly that art needs to be respected as art.”

Picketers again swarmed Lincoln Center for the festival’s premiere of “The Last Temptation of Christ,” Martin Scorsese’s 1988 film portraying Jesus as a person caught in a struggle between the earthly and the divine.

Joanne Rose Obermaier was born on Oct. 7, 1929, in Brooklyn, the one child of John Obermaier, an electrical engineer, and Blanche (Ashman) Obermaier, a professor of elementary education at Latest York University. As a young person at Midwood High School, she “used to sneak into the Loew’s Kings movie show on Flatbush Avenue through a side door for matinees,” Ms. Godbout, her daughter, said.

She graduated from Goddard College in Plainfield, Vt., with a level in political science, and in 1950 she took a job within the film department of the Museum of Modern Art in Manhattan, eventually becoming a technical director working on film preservation.

In 1949 she married Oscar A. Godbout, a journalist who covered Hollywood for The Latest York Times within the Fifties and later wrote concerning the outdoors because the newspaper’s “Wood, Field, and Stream” columnist. The couple divorced in 1967, and later that 12 months she married Richard A. Koch, the director of administration for MoMA.

Mr. Koch died in 2009. Along with her daughter, she is survived by three stepsons, Stephen Jeremy and Chapin Koch, and two grandsons.

In 1971, Ms. Koch took a job on the Lincoln Center Film Society, where she ran a program called “Movies within the Parks.” She ascended to the society’s top post six years later.

Not all her battles there amounted to artistic crusades. In 1987 she found herself embroiled in a distinct form of controversy when she and Alfred Stern, the society’s president, were reported to have led a campaign to oust Richard Roud, a respected cinephile and the longtime director of the festival, in a dispute that erupted after Ms. Koch overruled the festival’s selection committee to incorporate two movies by Federico Fellini.

“I believe Joanne wanted more power,” David Denby, then the film critic for Latest York magazine and a member of the choice committee, was quoted as saying in The Times. “It became obvious this summer when she began strong-arming the committee on the selections.”

Ms. Koch told The Times that the move “had nothing to do with film selection,” but fairly involved longstanding administrative differences.

Even so, it was a difficult chapter. “It was horrible,” Ms. Koch recalled in a 1992 oral history. “I used to be placed on the duvet of The Village Voice as ‘The Terminator.’”

But she was unrepentant. “It really did change the way in which I have a look at myself professionally,” she said. “Realistically, I’m not such a pleasant person on a regular basis. You may’t be, in this type of a job.”