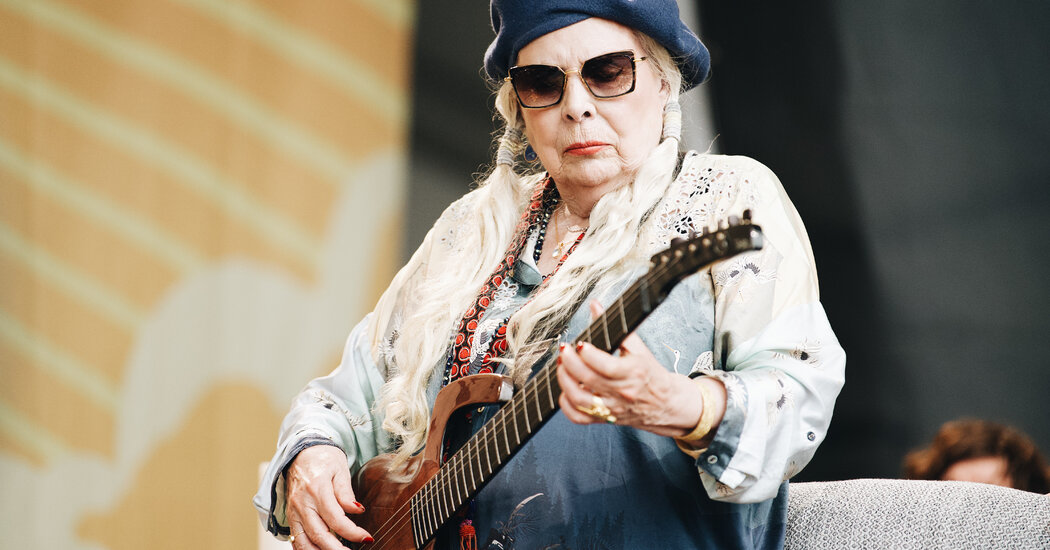 Joni Mitchell, the revered Canadian singer-songwriter and one in every of the defining musicians of the Sixties and ’70s, surprised an audience in Rhode Island on Sunday when she appeared on the Newport Folk Festival to perform her first full set in about twenty years, guitar in hand.

Mitchell, never one for the limelight, has remained largely out of the general public eye since having a brain aneurysm in 2015. As she recovered, she made just a few temporary appearances: In December, she gave a rare public speech as she accepted a Kennedy Center Honor, and in April, made a televised appearance on the Grammys and was honored at a gala for MusiCares, a Grammy-affiliated charity.

But on Sunday, Mitchell, 78, wearing a beret and sunglasses, performed a few of her most iconic songs, including “Carey,” “Big Yellow Taxi” and “Each Sides Now.”

At one point, Mitchell, an electrical guitar slung over her shoulder, performed a several-minutes-long solo during “Just Like This Train,” as fans whooped and cheered.

“In any case she’s been through, she returned to the Newport Folk Fest stage after 53 years and I’ll always remember sitting next to her while she stopped this old world for some time,” the singer-songwriter Brandi Carlile, who sang backup for Mitchell during her festival appearance, said in a Tweet.

Having “checked out life from so many sides,” Mitchell has come “out of the storm singing like a prophet,” she added.

Although Mitchell has limited her appearances lately, she has not avoided the headlines.

In January, Mitchell joined Neil Young in boycotting the streaming service Spotify, over its role in giving a platform to Covid-19 vaccine misinformation.

“Irresponsible persons are spreading lies which are costing people their lives,” Mitchell wrote of the corporate on the time. She added, “I stand in solidarity with Neil Young and the worldwide scientific and medical communities on this issue.”

On Sunday, several musicians, including Carlile, flanked Mitchell onstage, and sang along with her. “I won’t ever be over this. I can’t even watch it without the tears coming back,” Carlile wrote afterward Twitter. “Please forgive me.”

As Mitchell and Carlile sang “A Case of You” from the influential “Blue” album, released greater than 50 years ago, Mitchell sang:

Oh, I could drink a case of you, darling

And I’d still be on my feet