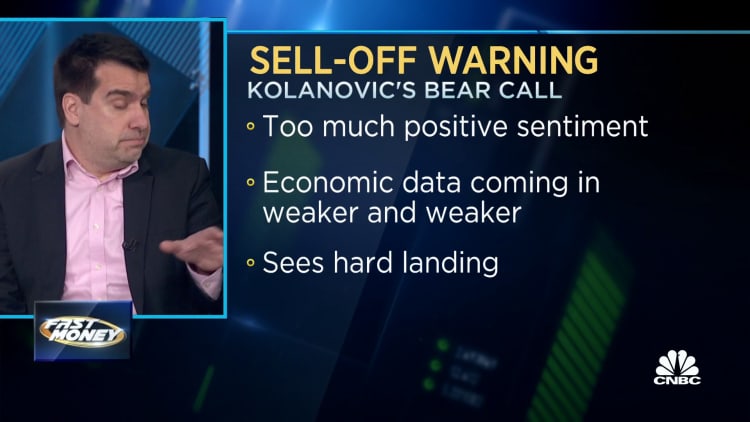 JPMorgan’s Marko Kolanovic is abstaining from the early 2023 rally.

As a substitute, the Institutional Investor hall-of-famer is bracing for a ten% or more correction in the primary half of this yr, telling investors he’s “outright negative” available on the market.

“Fundamentals are deteriorating. And, the market has been moving up. So, that has to clash sooner or later,” the firm’s chief market strategist and global research co-head told CNBC’s “Fast Money” on Tuesday.

Kolanovic slashed his firm’s exposure to stocks last week to underweight. In a recent note, he warned the market isn’t currently pricing in a recession. His base case is a tough landing.

“Short-term rates of interest moved lots within the last six months, and so they’ll probably still go a bit higher and stay there,” he said. “The patron took lots of debt. Rates of interest went up. The patron was resilient, and that was type of our thesis last yr… But as time progresses, they’re less and fewer resilient.”

He lists positive developments including China’s reopening from Covid-19 lockdowns and a weaker dollar for market enthusiasm. Kolanovic believes they helped create a narrative the more serious is behind us and a recession “by some means magically ” happened last yr.

“I just don’t think that at 5% rates we will have this economy functioning,” said Kolanovic, who noted private equity and enterprise capitalists cannot exist in this sort of environment. “Something may have to offer, and the Fed might want to flinch.”

And, it could occur this yr as a rate cut.

“Sooner or later, they’ll [the Fed] backstop it. So, the massive query is where. Is it [the S&P at] 3,600? 3,400? 3,200? We do not have a really strong conviction. But we do think lower is the direction,” he said. “There is generally some contagion or something that happens unexpected.”

Kolanovic lists Treasury bonds and money as viable places to cover out for now.