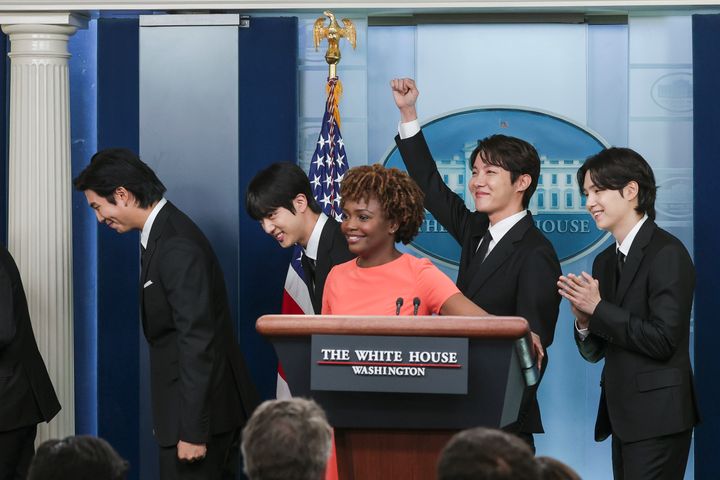 BTS, the seven-member South Korean pop group with certainly one of the world’s most ravenous fanbases, visited the White House on Tuesday to deal with the rise in hate crimes and other acts of discrimination against Asian Americans.

The band, also referred to as the Bangtan Boys, participated in a press briefing with White House Press Secretary Karine Jean-Pierre before meeting with President Joe Biden.

“We were devastated by the recent surge of hate crimes, including Asian American hate crimes,” BTS vocalist Jimin said from the rostrum, as conveyed by an interpreter. “To place a tricky stop on this and support the cause, we’d prefer to take this chance to voice ourselves once more to say we’re here today due to our army ― our fans worldwide ― who’ve different nationalities and cultures and use different languages. We’re truly and at all times grateful.”

Hate crimes targeting Asian Americans skyrocketed throughout the COVID-19 pandemic, which former President Donald Trump repeatedly called “the China virus,” “kung flu” and other racist names due to its origins in Asia. A report published by the Center for the Study of Hate and Extremism earlier this yr found that anti-Asian hate crimes jumped by 339 percent in 2021 in comparison with the yr before.

Greater than a quarter-million people reportedly watched BTS’s appearance on the White House.

“We hope today is one step forward to respecting and understanding every one as a priceless person,” BTS vocalist V said through the interpreter.

Lots of of K-pop fans assembled outside the White House gates throughout the press briefing, chanting the band’s name. Greater than a quarter-million people reportedly tuned into to the White House stream of the event on YouTube.

White House National Economic Council director Brian Deese followed BTS at Tuesday’s press conference, jokingly boasting: “OK. So I get to go home and tell my kids that BTS opened for me. I didn’t expect that once I woke up this morning.”

Though BTS’ management maintains tight control of the group’s public image, statements and politics, the band broke from convention in 2020 and spoke out in support of the Black Lives Matter movement and donated $1 million to the cause.

“We stand against racial discrimination. We condemn violence. You, I and all of us have the suitable to be respected. We’ll stand together,” BTS tweeted following the murder of George Floyd by a police officer in Minneapolis.

“They got beaten at their very own game by Korean pop fans,” Mike Rothschild, a conspiracy theory researcher, told Bloomberg in regards to the phenomenon in 2020. “I’d never seen anything prefer it before.”