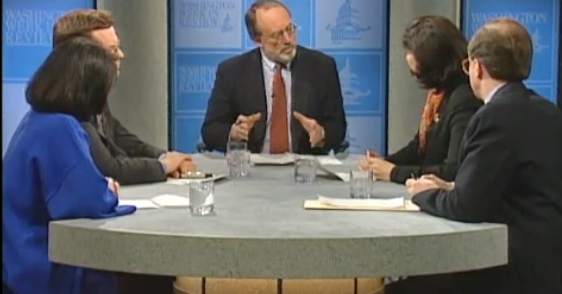 Ken Bode, a bearded, bearish former political operative and tv correspondent who, armed with a Ph.D. in politics, moderated the favored PBS program “Washington Week in Review” within the Nineties, died on Thursday in Charlotte, N.C. He was 83.

His death, in a care center, was confirmed by his daughters, Matilda and Josie Bode, who said the cause had not been identified.

Starting in 1994, Mr. Bode (pronounced BO-dee) coupled congeniality and knowledgeability in steering a Friday night discussion amongst a rotating panel of reporters concerning the problems with the day coming out of Washington. His role, as he saw it, was to “herald people who find themselves really covering the news to empty their notebooks and supply perspective, to not argue with one another,” he told The Washington Post in 1999.

As host of this system, now called “Washington Week,” he succeeded Paul Duke, who had helmed that roundtable of polite talking heads for 20 years, and preceded Gwen Ifill, a former NBC News correspondent who died in 2016 at 61. This system, which debuted in 1967, is billed as TV’s longest-running prime time news and public affairs program. The present host is Yamiche Alcindor.

This system’s loyal and customarily older viewers were so brass-bound within the Nineties that when Mr. Bode took over, even his beard proved controversial. He proceeded to introduce videotaped segments and distant interviews with correspondents and convey more diversity to his panel of reporters.

He also took more liberties with language than his predecessor.

Mr. Bode moderating an episode of “Washington Week in Review.” He hosted this system from 1994 to 1999 while teaching politics at DePauw University in Indiana. Credit…PBS

Ending an interview with Bob Woodward of The Washington Post about President Bill Clinton’s economic policies, Mr. Bode quoted a British newspaper’s snarky prediction that the president’s impending visit to Oxford, England, would present individuals with a chance to “give attention to one in every of the president’s less well-publicized organs: his brain.” He described a emptiness on the Supreme Court as constituting “one-ninth of one-third of the federal government.”

Still, Dalton Delan, then the newly-minted executive vice chairman of WETA in Washington, which continues to provide this system, desired to invigorate the format. He proposed including college journalists, surprise guests and people-on-the-street interviews and replacing Mr. Bode with Ms. Ifill (she said she initially turned down the offer) — changes that prompted Mr. Bode to leap, or to be not so gently pushed, from the host’s chair in 1999.

Kenneth Adlam Bode was born on March 30, 1939, in Chicago and raised in Hawarden, Iowa. His father, George, owned a dairy farm after which a dry cleansing business. His mother, June (Adlam) Bode, kept the books.

The primary member of his family to attend college, Mr. Bode majored in philosophy and government on the University of South Dakota, graduating in 1961. He went on to earn a doctorate in political science on the University of North Carolina, where he was lively within the civil rights movement.

In 1968, Mr. Bode worked within the presidential campaigns of Senators Eugene McCarthy and George S. McGovern. He became research director for a Democratic Party commission, led by Mr. McGovern and Representative Donald M. Fraser of Minnesota, that advocated for reforms in the choice process for delegates to the 1972 Democratic National Convention. He later headed a liberal-leaning organization called the Center for Political Reform.

His marriage to Linda Yarrow led to divorce. In 1975, he married Margo Hauff, a highschool social studies teacher who wrote and designed educational materials for learning-disabled children. He’s survived by her, along with their daughters, in addition to by a brother and two grandsons.

After working in politics, Mr. Bode began writing for The Latest Republic within the early Nineteen Seventies and have become its politics editor. He moved to NBC News in 1979, encouraged by the network’s newsman Tom Brokaw, a friend from college, and eventually became the network’s national political correspondent. In that role he hosted “Bode’s Journal,” a weekly segment of the “Today” show, on which he explored, amongst other issues, voting rights violations, racial discrimination and patronage abuses, as his longtime producer Jim Connor recalled in an interview.

Mr. Bode left the network a decade later to show at DePauw University in Indiana, where he founded the Center for Contemporary Media. While at DePauw, from 1989 to 1998, he commuted to Washington to host “Washington Week in Review” and wrote an Emmy-winning CNN documentary, “The Public Mind of George Bush” (1992).

Starting in 1998, he was dean of Northwestern University’s Medill School of Journalism for 3 years and remained a professor there until 2004.

Mr. Bode said he retired from broadcast journalism for family reasons. “I used to be raising my kids from 100 airports a yr,” he said. As he told The Latest York Times in 1999, “I knew then that my problem was, I’ve got one of the best job, but I’ve also got one likelihood to be a father, and I’m losing it.”