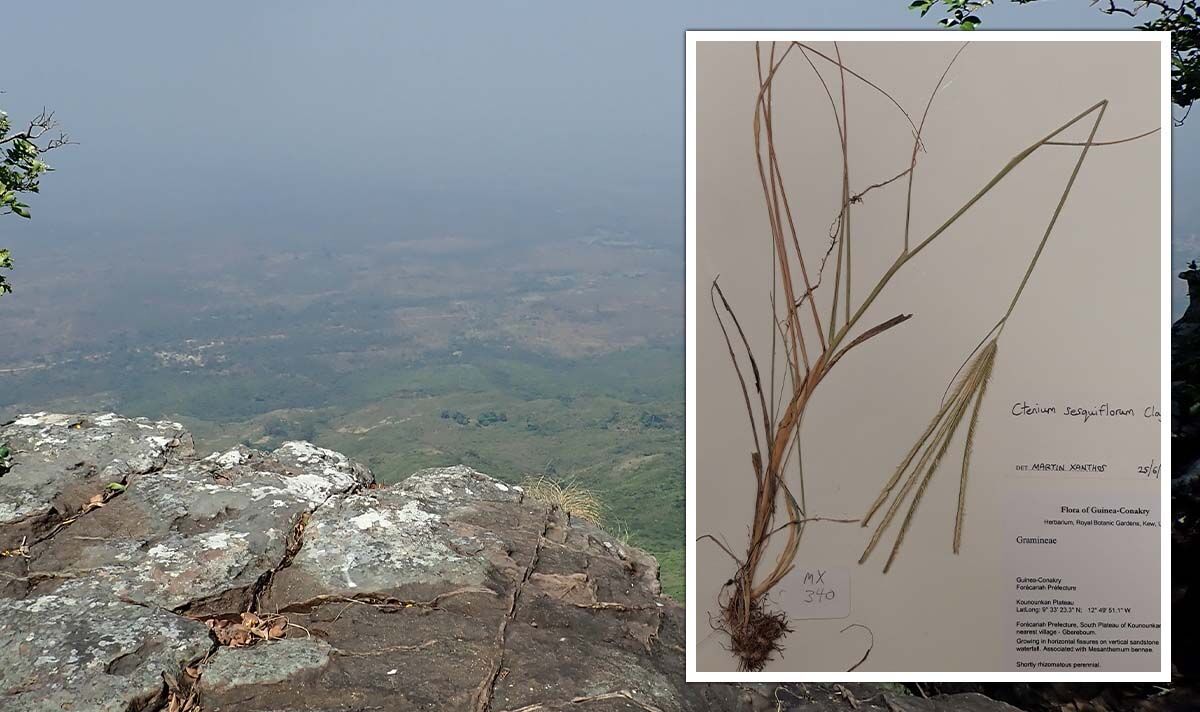 A botanist from Kew Gardens discovered a plant species that was long believed to be dead, after by accident stumbling upon it at the sting of a waterfall in 2019, Express.co.uk has been told. In 2019, Royal Botanical Gardens Kew botanist Martin Xanthos, together with colleagues from Guinea were on a field mission collecting seed samples in Kounounkan, Guinea. It was during this expedition that the team by accident rediscovered Ctenium sequiflorum, which is a long-lost species of grass, on the sting of a 280m tall waterfall, which had no running water on the time because it was throughout the dry season.

Mr Xanthos’ colleague, Dr Xander van der Burgt specifically chosen this waterfall believing that it can have contained plants within the Podostemaceae family, which only grow in waterfalls and rapids.

Mr Xanthos told Express.co.uk: “The target of the expedition was to gather seeds for the Millennium Seed Bank (MSB) and plants for the Guinea TIPA (Tropical Necessary Plant Areas) project.

“This project goals to discover probably the most threatened habitats for plants in Guinea and the threatened plant species they contain, with a view to work with local officials in implementing conservation measures to guard these habitats.

“Google Earth was used to locate threatened habitats. The species Ctenium sesquiflorum, was not looked for specifically, but was found on the sting of a 280 m high dried-out waterfall within the south plateau of Kounounkan Massif; a big uninhabited table mountain that has more globally unique species than another location in Guinea and where forest destruction continues.”

Meanwhile, Pépé M. Haba, a Guinean botanist added: “The habitat where the plant was found stays very difficult to access due to steep sandstone mountains (quite a few cliffs) and can also be a part of the protected areas of the Mount Benna plateau in line with the Guinean government. The realm was chosen for studies of Tropical Necessary Plant Areas (TIPAs) and seed collection for the Millennium Seed Bank (MSB).

“Although there are human activities upstream and downstream, the mountainside stays out of agricultural use, logging and other activities related to habitat destruction due to cliffs so the stream is protected by a gallery forest. Nevertheless, livestock farming is practiced in the world, which has no potential impact on the world.”

Before its rediscovery, the plant was believed to have been extinct for over 70 years, having been last collected within the wild in 1949 at a location some 150km away.

That is why when Mr Xanthos collected the species and brought it back to Kew’s Herbarium and studied it, he was surprised to search out what he was .

Mr Xanthos said the plant was last present in the Lateritic bowal habitat, adding that the world is “characterised by an absence of trees and an orange-red soil surface as a consequence of the high iron content in the bottom.

The important threats to this habitat are iron-ore mining, though additional threats include artificial fires, associated grazing and intensive agriculture. Because this species, together with several others, had not been recorded over several a long time despite many surveys carried out in Guinea, it was presumed, in early 2019, that the species was possibly extinct.

“It was only after the gathering from Kounounkan was brought back to Kew, that it was identified as the identical species as that collected in 1949.”

Consequently of the team’s work, RBG Kew’s scientists have published conservation assessments for around 250 species in Guinea, outlined within the book Threatened Habitats and Tropical Necessary Plant Areas (TIPAs) of Guinea West Africa. As well as, they’ve highlighted 22 threatened habitats in need of conservation. (Here’s more info about our TIPAs programme).

Attempts are also now underway to have government of Guinea declare the Kounounkan forest and plateau a national park.

Dr Xander van der Burgt added: “We’re currently in search of additional lost species in Guinea. We have now an inventory of a couple of dozen plant species from Guinea which haven’t been seen for greater than 50 years. Finding these species would confirm they aren’t extinct and would assist of their conservation.”

This comes as last week, countries struck a landmark deal to guard a 3rd of the planet’s biodiversity by 2030 on the COP15 UN biodiversity summit in Montreal, Canada.

The agreement included setting targets for shielding vital ecosystems similar to rainforests and wetlands, and likewise protecting the rights of indigenous groups.