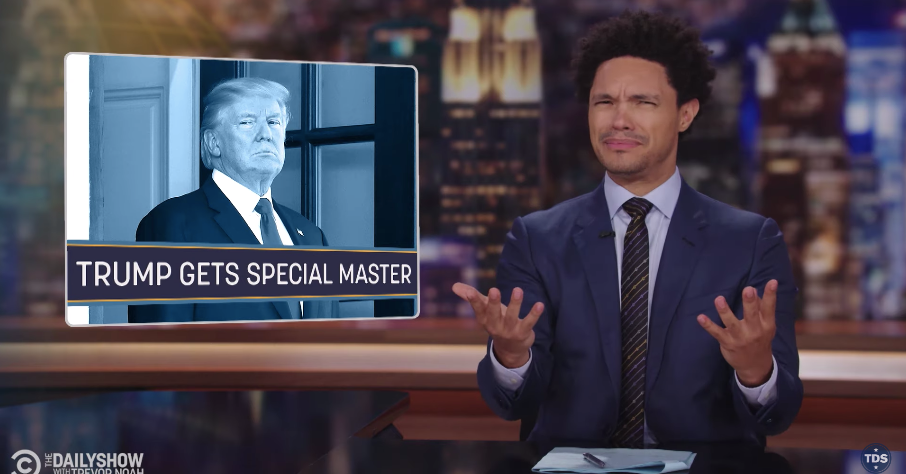 Trevor Noah said he’d never heard of a special master before, adding that “once more Donald Trump has exposed a component of America that I’m willing to bet no person knew existed. No one!”

“I didn’t even understand it was an option. I’ve watched 10 million hours of ‘Law & Order.’ I learn about subpoenas, I learn about breaking the chain of custody, objection, sustained, overruled, sidebar in my chambers — but not once have I heard the term ‘special master.’ Once more, because of Trump, due to his labor and dedication to doing crimes, we’ve all learned something latest today, and I say thanks, Mr. President.” — TREVOR NOAH

“You recognize, I’ve been trying to know how he could possibly imagine he had the proper to take all those documents to his house. It’s weird that a one that barely reads would even want documents. It’s like checking out your dog collects stamps.” — JIMMY KIMMEL

“But much more concerning is that the F.B.I. also found dozens of classified folders that were empty, which obviously raises the query, where are the documents from the folders? Are they in other boxes? Did he lend them to Saudi Arabia? Or possibly — possibly it’s more innocent, yeah. Possibly Trump keeps a bunch of folders labeled ‘classified’ so he can provide them to friends with photocopies of his butt inside.” — TREVOR NOAH

“The feds also recovered documents related to the usage of ‘clandestine human sources’ in intelligence gathering. Meaning lists of our secret operatives in foreign governments. Why would he have those? Is he writing a latest spy thriller: ‘Tinker, Tailor, Soldier, Woman, Man, Camera, T.V.’?” — STEPHEN COLBERT

On “The Tonight Show,” Hillary Clinton reacted to Jimmy Fallon’s monologue about what the F.B.I. found while searching Mar-a-Lago.

The singer Fletcher will make her late-night debut on Wednesday’s “Tonight Show.”