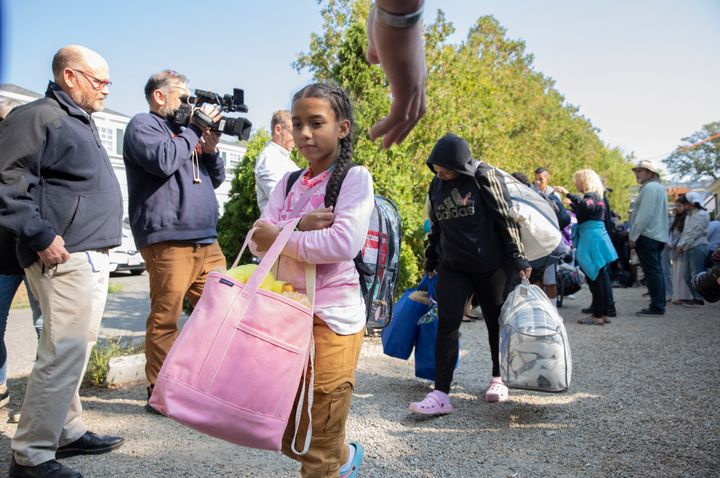 The migrants who crossed the southern U.S. border and were later flown in two planeloads to Martha’s Vineyard got falsified addresses corresponding to “random homeless shelters” for his or her official paperwork, in response to a Boston immigration attorney.

Rachel Self suggested Friday that this was done purposefully by Department of Homeland Security officials to make it tougher for the migrants to remain within the country.

Florida Gov. Ron DeSantis (R) took credit for arranging and funding the flights, which landed Wednesday afternoon at the rich island community off the coast of Massachusetts. He aimed to make some extent concerning the surge in migration along the border with Mexico, though his state doesn’t abut the country.

The Miami Herald reported that Self is assisting with the migrants’ cases.

She told reporters that the group of fifty men, women and kids ― largely from Venezuela ― were processed by DHS agents before leaving San Antonio.

Rachel Self, a Boston immigration attorney tells you every little thing you want to find out about immigrants sent to Martha’s Vineyard.

They’d been given falsified U.S. addresses by immigration officials, perhaps ensuring that they’d be deemed within the country illegally. pic.twitter.com/mBp7AqBow1

Among the migrants had specifically told the DHS agents that that they had no mailing address in the US, Self said.

That they had allegedly been instructed to notify U.S. Citizenship and Immigration Services ― the incorrect agency ― once they modified addresses.

“This is particularly troubling, as anyone with even essentially the most basic understanding of the immigration proceedings knows that USCIS was not the agency with whom the migrants would should record their addresses,” Self said during a press conference.

An underage migrant (center) is loaded onto a bus to be transported to Martha’s Vineyard with dozens of other undocumented immigrants on Friday, Sept. 16.

Dominic Chavez for The Washington Post via Getty Images

Among the migrants told NPR that a lady named Perla said they may expect work papers after being flown to Massachusetts. But nobody was waiting for them, and the group ended up walking around 2 miles to a community center to ask for help, in response to Cape Cod Times, a neighborhood newspaper.

They were welcomed by islanders and given shelter, cell phones and other supplies, per The Washington Post.

The group was voluntarily relocated Friday to a military base on the mainland that is best equipped to accommodate and feed people for weeks at a time, Massachusetts Gov. Charlie Baker (R) said.