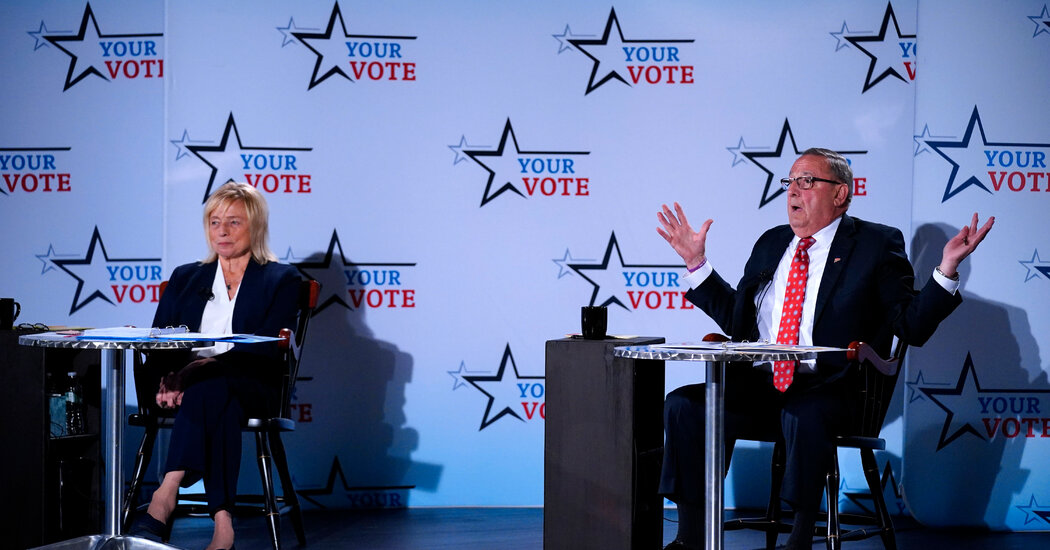 Republicans’ struggles to search out an efficient abortion message this campaign season manifested itself on Tuesday on a debate stage within the Maine governor’s race, as former Gov. Paul LePage repeatedly stumbled over an issue about how he would handle the difficulty if voters returned him to office.

The problem has been a bonus for Democrats, whose base has been energized after the Supreme Court overturned Roe v. Wade while Republicans face a dilemma over learn how to reassure swing voters without alienating their conservative base. Gov. Janet Mills, a Democrat searching for a second four-year term, appeared to sense her opportunity while seated just a few feet from Mr. LePage, a Republican who left office in 2019 due to Maine’s prohibition on serving a 3rd consecutive term.

Asked whether she would remove state restrictions on abortion, Ms. Mills said she supported the present law. Maine permits abortions until viability, generally until 24 to twenty-eight weeks, when a fetus could survive outside a mother’s uterus.

“My veto power,” Ms. Mills said, “will stand in the way in which of efforts to roll back, undermine or outright eliminate the suitable to protected and legal abortion in Maine.”

Mr. LePage was then asked whether he would sign a bill that placed additional restrictions on abortions within the state. While Democrats hold majorities in each chambers of Maine’s Legislature, Republicans are making a play to flip each in November.

“And in the event that they brought those bills to you, you wouldn’t sign them?” asked one in every of the moderators, Penelope Overton, a staff author for The Portland Press Herald.

Ms. Mills then jumped in and identified that in Maine, a bill can develop into law without the governor’s signature.

“Would you let it go into law without your signature?” Ms. Mills asked.

“I don’t know. I might look — that’s a hypothetical,” Mr. LePage said.

“You were governor,” Ms. Mills continued. “You understand what the choices are.”

“Wait a second,” Mr. LePage said, throwing his hands within the air.

“Would you let it go into law without your signature?” Ms. Mills asked, turning to her left to face her predecessor and repeatedly point at him.

Mr. LePage dropped a pen he had been holding, and bent over to choose it up off the bottom.

Mr. LePage broke off his query. It was unclear what he was asking, and a campaign spokesman didn’t immediately reply to requests to make clear or comment for this text.

Ms. Mills, now sitting back in her chair together with her legs crossed and her hands folded flatly on the table in front of her, continued to press.

“Would you permit a restrictive law to enter effect without your signature?” she asked, looking at Mr. LePage. “Would you block a restriction on abortion?”

“Would I block?” Mr. Page said. “That is what I might do,” he added, chopping each hands within the air in front of him. “The law that’s in place straight away, I actually have the identical exact place you’ve gotten. I might honor the law because it is. You’re talking a couple of hypothetical.”

Ms. Overton reminded Mr. LePage that she had asked about whether or not he would veto additional abortion restrictions.

“I do understand the query,” Ms. Mills interjected. “My veto pen would stand in the way in which.”

One other moderator, Jennifer Rooks, who hosts a radio show on Maine Public, stepped in and asked Mr. LePage what he would do if lawmakers passed a bill to ban abortions after 15 weeks.

“Would you veto that?” Ms. Rooks asked.

Earlier within the week, Mr. LePage had boasted that he wasn’t planning to organize for the controversy against Ms. Mills, in keeping with The Bangor Every day News.