Life Is Hazardous for Urban Raptors. These Women Offer Hope. 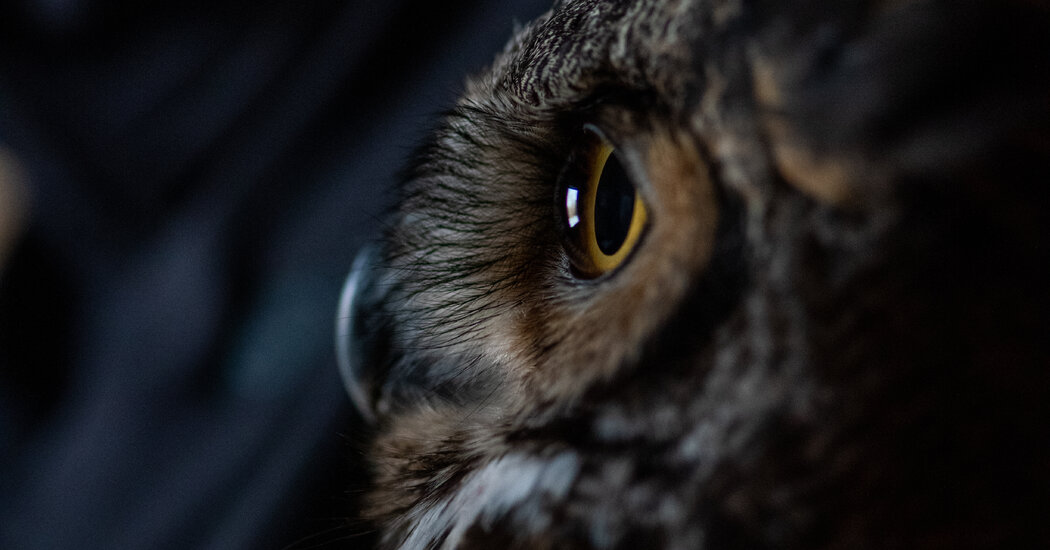 It’s quiet on the back roads of Boyds, Md., where a small compound studded with bird feeders breaks up the monotony of the encircling cornfields.

Suddenly, a souped-up Toyota Tacoma kicks up a cloud of dust because it pulls into view on a gravel path. It slows to a halt. A figure steps out of the truck: a girl with a glove covering one arm and a sleeve of hawk tattoos covering the opposite. Reaching into the passenger seat, she pulls out a box, one which appears to be fighting her back.

This one, I knew, could be headed for the I.C.U.

Nancy McDonald is a volunteer rescuer on the Owl Moon Raptor Center, a corporation based in Boyds that helps rescue and rehabilitate injured raptors — including hawks, owls, eagles and ospreys — before returning them to the wild.

The word “raptor” derives from the Latin verb “rapiō,” meaning “to seize.” All raptors have 4 characteristics: a hooked beak, sharp talons, keen eyesight and a carnivorous eating regimen.

In some respects, birds of prey that live amongst human populations have a fragile life cycle. The threats they face include rodenticides (pesticides that kill rodents), entanglement with fishing lines and wires, automotive strikes and collisions with windows.

In other ways, though, the animals are incredibly adaptive.

Peregrine falcons sometimes use high-rise buildings as their aeries; ospreys can occupy man-made platforms to boost their chicks; and committees of vultures sometimes take over dumpsters, said Ms. McDonald, a 62-year-old U.S. Army veteran who began as a rescue volunteer in 2017. (And yes, “committee” is certainly one of the terms for a bunch of vultures.)

I first learned about Ms. McDonald and the Owl Moon Raptor Center, whose primary operator is Suzanne Shoemaker, an authority in animal behavior and ecology, once I was a university student in Washington, D.C. Then an aspiring wildlife photographer, I assumed I’d should travel to far-flung places with a view to find subjects to photograph.

And yet, on my approach to and from classes, I’d often see hawks soaring above the cityscape. Eventually I started to trace the birds in between lectures, looking for signs of broken branches or the carcasses of their prey. Spending a lot time in search of hints of the birds led me to wonder in regards to the threats they faced and about those that worked to avoid wasting them.

When the pandemic hit in 2020, I moved back to my family home within the suburbs. But still intrigued by the birds, I posted an issue in a neighborhood birding group on Facebook, and Ms. McDonald answered. She invited me to go to Owl Moon and learn in regards to the threats that plague urban raptors.

After my initial visit, I used to be hooked. For weeks I accompanied Ms. McDonald as she went about her work — on rescues, on hikes to the rehabilitation field, into the freezers to mince mice carcasses. We even shared a bottle of whiskey when a bird we each loved needed to be humanely euthanized.

Not all of the work was uplifting. On one occasion, a red-tailed hawk named Kean was found to be sitting on top of and crushing other birds within the mew, a big birdhouse designed to carry several raptors. (After colliding with a high-rise in Baltimore, the bird was affected by neurological and behavioral issues.) Ultimately, Kean’s condition exacerbated the injuries of other birds, limiting their possibilities to heal.

It was a race against time. Ms. McDonald tried to seek out one other home for the bird, calling other rehab centers that she thought might want the hawk as an envoy bird, or a bird used for educational purposes with students and other visitors. But nobody else had room for what some saw as “yet one more red-tailed hawk.” (Many centers can have made room for a more exotic bird.)

Having exhausted all other options, and understanding that the bird’s condition was too dangerous to the opposite releasable birds, the Owl Moon Raptor Center had no alternative but to euthanize Kean.

Euthanasia is an unlucky reality of raptor rescues. In lots of instances, it’s the only humane way forward after rodenticide poisonings or collisions with windows or cars. Still, for the anguished volunteers, each loss is painful.

In fact, it’s the successes that drive the raptor rescuers forward. Ms. McDonald still remembers certainly one of the primary tasks she was given when she joined the organization: to release a rehabbed red-tailed hawk in Crofton, Md.

“I opened the box and it hopped out,” she said. “The hawk just sat there for about 10 minutes, getting its bearings — after which, abruptly, it took off.” That was the primary time she knew that she was a part of something beneficial, she said.

I spent an excellent deal of my time at Owl Moon in and across the mew, where lots of the hawks are held. The wood floorboards creaked as I got here and went, accompanied by the rustling of greater than 20 birds of prey who were confined while being rehabilitated.

I’d watch and photograph because the rescuers rigorously prepared for his or her every day rounds. They pulled on oversize Kevlar gloves and equipped themselves with 12-foot nets. Then they got able to duck. There was a flurry of feathers as they entered the room with the birds, the newly admitted red-shouldered and red-tailed hawks scattering to the highest of their enclosure.

To those that work at Owl Moon, each bird’s journey is an element of their very own. Each the birds and their rehabbers yearn for the day the raptors can fly free. But in offering the birds one other likelihood, the rescuers themselves gain something, too: lessons about resilience, adaptation and recovery.

As a photographer, I learned something necessary from the birds, too — namely that profound conservation stories needn’t take me to the ends of the earth. They’re to be found throughout us, in our cities and suburbs, if only we’re willing to look.

Jules Jacobs is a conservation photographer based in San Diego. You may follow his work on Instagram.