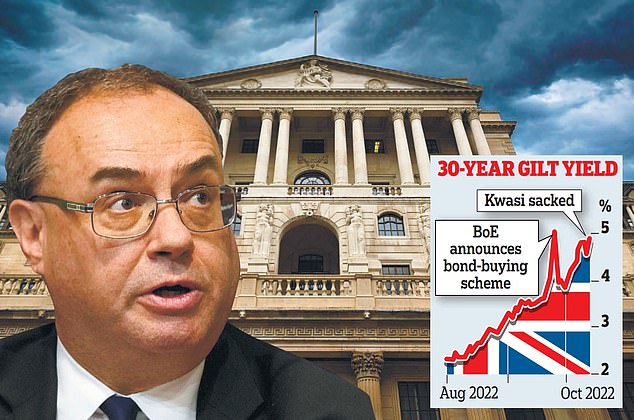 By John-paul Ford Rojas For The Day by day Mail

UK bonds sold off last night after investors were left unconvinced by Liz Truss’s try and undo the damage of her government’s mini-Budget.

The sell-off got here just because the Bank of England ended its £65bn intervention that was designed to finish markets chaos.

Now there are fears that UK assets will come under more pressure next week after the Prime Minister’s U-turn on corporation tax and sacking of chancellor Kwasi Kwarteng didn’t assuage her political critics or answer doubts over the Government’s funds.

Yields on 30-year bonds – which move within the inverse direction of costs – climbed sharply within the wake of a press conference by Truss to announce the reversal of corporation tax plans.

Earlier within the day, bond markets had been rallying in anticipation of the U-turn. The 30-year yields – which represent the returns demanded by investors for lending to the Government – were as little as 4.25 per cent yesterday morning but by late afternoon soared above 4.8 per cent.

That took them to the identical level as they were on Thursday, before speculation about Truss’s latest policy switch had begun.

Shorter dated bond yields also rose while the pound fell by nearly two cents to as little as $1.1153.

In stocks, the FTSE100 gave up gains of greater than 100 points seen earlier within the session to finish just 8.5 points higher.

‘In all, markets seem unconvinced that today’s announcement was enough,’ Investec economist Ryan Djajasaputra said. Reversing corporation tax and a plan to scrap the 45p top rate of income tax still leaves the Government with £25billion of unfunded tax cuts left over from the £45bn originally touted within the mini-Budget.

Paul Dales, chief economist at Capital Economics, added: ‘It’s unlikely the removal of Kwasi Kwarteng and the brand new plans to cancel the cancellation of the rise in corporation tax from 19 per cent to 25pc from next April might be enough on their very own to regain the complete confidence of the financial markets.’

It was carnage in 30-year bonds that had seen the Bank of England step in on September 28 with a pledge to purchase as much as £5billion long-dated bonds a day for 13 days.

The intervention appeared to do the trick initially but volatility erupted again. The Bank beefed up the programme last Monday by expanding it to incorporate inflation-linked bonds, in addition to upping the every day limit to £10billion.

Nonetheless, governor Andrew Bailey acted to squash speculation that it might be prolonged beyond its end date of yesterday – rejecting pleas by pension funds that had been caught up within the crisis. During an event in Washington earlier this week, Bailey warned: ‘You’ve three days left now. You’ve to get this done.’

A final every day auction yesterday took the Bank’s total bond purchases to £19.3billion, comprised of £7.2billion of index-linked bonds and £12.1billion of conventional bonds.

James Athey, investment director at Abrdn, said there had been a ‘small sigh of relief in UK assets over the past 24 hours but added: ‘The excellent news for the gilt [UK bond] market might be already over.’