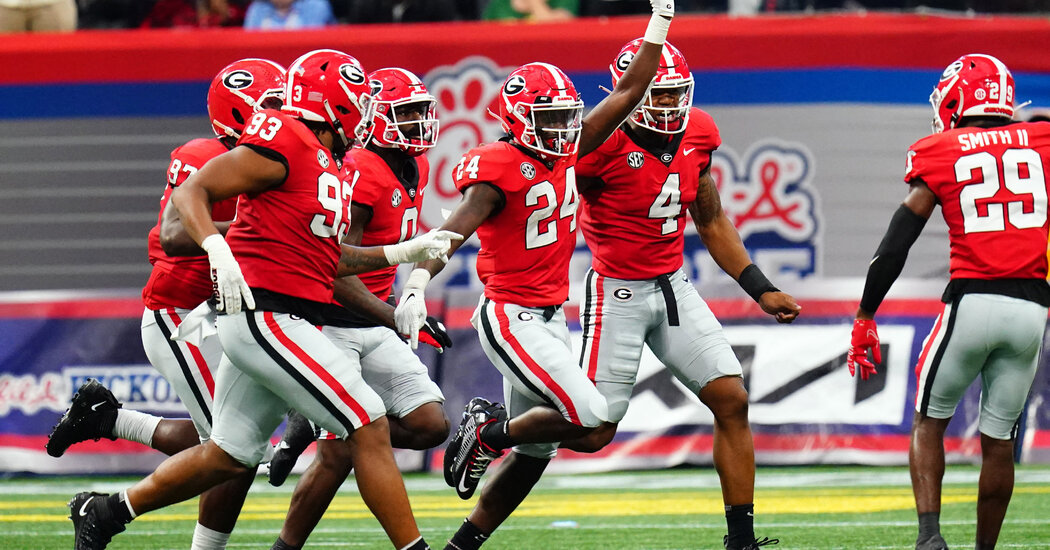 ATLANTA — In December, the last time Georgia swaggered into Atlanta’s Mercedes-Benz Stadium, the Bulldog faithful fell all but silent long before the top.

There have been few, if any, callings of the Dawgs as that Southeastern Conference championship game became a debacle, and no roars for a Georgia trophy presentation. In truth, by the top of a night with a double-digit loss to Alabama, there have been not all that many Georgia fans left.

Nine months — and, despite that December night, one national championship win over Alabama — later, Georgia soundly reclaimed the theoretically neutral turf about 70 miles from its stately campus in Athens. From start to complete, the No. 3 Bulldogs threw up thickets of speed, pressure, power and guile to crush No. 11 Oregon, 49-3.

Georgia took just 12 offensive snaps to attain for the primary time this season. With a bit greater than six minutes to play in the primary quarter, Stetson Bennett softly tossed the ball to Ladd McConkey, a redshirt sophomore who darted left and thundered toward the top zone near his university’s Redcoat Marching Band, which responded with brassy thunder of its own.

The Bulldogs waited until the second quarter’s opening moments to attain again, this time with a fast rush by Bennett to cap a 92-yard touchdown drive. For its third touchdown, Georgia again returned to the bottom, entrusting the senior tailback Kenny McIntosh with an end zone-bound run to push his team’s tally to 21.

But it surely was not all Georgia’s wizardry, for the Bulldogs had help from Bo Nix, the Oregon quarterback who transferred to the Pacific Northwest from Auburn. Nix threw two interceptions in the primary half, and each led to touchdown drives for Georgia, which began with one from its own 8-yard line after Malaki Starks snagged a Nix pass.

Starks also had eight tackles, essentially the most of any Bulldog on Saturday.

Oregon’s best likelihood to stem Georgia’s momentum got here with about 4 minutes remaining in the primary half, when the Geese maneuvered into the red zone. But a pair of incomplete passes and a false-start penalty left Oregon to accept a field goal.

Within the half’s closing minute, Bennett — so derided after the December loss to Alabama that Coach Kirby Smart faced questions over whether the quarterback would start within the College Football Playoff — escaped a tackle to lob a pass to McConkey and push Georgia to a 28-3 lead at halftime.

In Saturday’s game, Bennett logged 368 passing yards, the most effective showing in his profession, and accomplished 81 percent of his throws. McIntosh led Georgia with 117 receiving yards.

A few of the Georgia stat padding got here as soon because the Bulldogs opened the second half, when Bennett helped engineer a six-play drive that featured Kendall Milton jogging past the goal line.

Oregon fans stuck around anyway, the rebirth they sought nowhere in sight during Dan Lanning’s debut because the Oregon coach after 4 seasons at Georgia, including three as defensive coordinator. As a substitute, many stayed for a showing that only grew worse: Georgia scored touchdowns on its first seven possessions and didn’t punt until the fourth quarter.

Smart, whose team converted nine of its 10 third downs, moved to 7-0 in season openers.

“They’ve good guys, and you may’t afford to play poorly against a great team,” said Lanning, who insisted that each one of Oregon’s goals remained close by and said that Nix would remain the Oregon quarterback.

The Georgia-Oregon matchup was considered one of Saturday’s few contests that pitted one marquee program against one other, or so recent history and the preseason polls suggested. However the season’s first full slate of games offered glimpses of the chaos, a few of it cringe-inducing, and premature hope that so often thrills and terrorizes fans.

East Carolina missed an upset of No. 13 North Carolina State by 1 point, the identical margin by which Rutgers escaped Boston College. North Carolina survived Appalachian State, 63-61. Iowa managed to get past South Dakota State while scoring all of seven points — on a field goal and a pair of safeties. (“I’ve never been around a game like that,” Iowa Coach Kirk Ferentz, in charge in Iowa City since 1999, said.)

In Arkansas, the Nineteenth-ranked Razorbacks outlasted No. 23 Cincinnati, which last season became the primary team from a Group of 5 conference to make the playoff.

Oregon was considered one of the teams ignored last 12 months, done in by a visit to Utah that also shattered the Pac-12 Conference’s playoff dreams. But Friday’s announcement that the playoff will expand, from 4 teams to 12, no later than 2026 could someday make much-hyped meetings just like the one on Saturday in Atlanta less a jousting for a playoff spot than a selling point in the hunt for the next seeding.

But that reality is maybe 4 seasons from now. This campaign is being played in a world that has never seen a two-loss team reach the playoff, one where fans are accustomed to bickering over which one-loss team(s) should make the cut.

Saturday made Georgia’s journey a measure clearer, partly since the Bulldogs will not be scheduled to play one other currently ranked opponent until Nov. 19. Because it so happens, that’s when Oregon will meet Utah, whose Saturday night defeat at Florida is certain to send the Utes tumbling from No. 7.

At those November kickoffs, with the ultimate playoff rankings nearing, the primary Saturday in September will probably still be resonating.