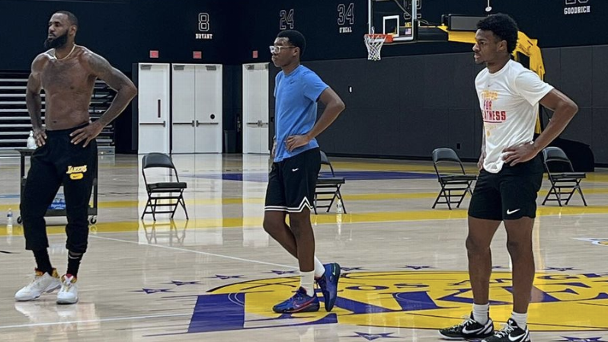 LeBron James‘ offseason was perhaps highlighted by his surprise showing within the Drew League, where he took the ground with Chicago Bulls guard DeMar DeRozan on the MMV Cheaters.

It was the Los Angeles Lakers star’s first appearance on the L.A.-based pro-am summer basketball league in over a decade and he posted a 42 point, 16 rebound statline en path to a 104-102 win.

His offseason stays a preferred topic, as he made an Instagram post of a workout he accomplished on the Lakers’ practice facility along with his sons, Bronny and Bryce.

James has been vocal about his desire to play along with his oldest son. Bronny is ready to start his senior season at Sierra Canyon High School in the autumn, and Bryce might be a sophomore.

“My last 12 months might be played with my son,” James said to The Athletic in February. “Wherever Bronny is at, that is where I will be. I’d do whatever it takes to play with my son for one 12 months. It isn’t in regards to the money at that time.”

The video showed the three of them completing various drills, including a trio of dunks.

But James is not the only NBA player with interesting offseason activities. From star-studded nuptials to movie premieres and more, players across the association have been quite busy this summer.

Curry continued the break from his day job with a side gig hosting this 12 months’s ESPYS.

“I’ve had the pleasure of attending The ESPYS but never imagined I’d have the privilege of hosting this special event,” Curry said in a press release. “As someone who loves the intersection of sports and entertainment, I stay up for delivering an exciting show for the fans while we have fun the athletes who created the highest moments of the 12 months.”

He’s the ninth athlete to host the award show.

Brown’s aquatic workout is an interesting solution to prepare for the season.

On June 24, “Rise,” an original film that documents Antetokounmpo’s family’s journey, was released on Disney+.

The premiere was also a family affair. Brothers Francis, Thanasis and Kostas were alongside the six-time All-Star.

The player from Southern California,a Drew League staple, scored 39 points in his debut for the summer pro-am league and later joined James on the MMV Cheaters.

In considered one of the more area of interest activities, the 6-foot-11 center built a life-size Lego statue of himself as Darth Vader from Star Wars. Turner went viral for his hobby in March.

Love tied the knot with Canadian model Kate Bock, and teammates present and past were in attendance.

Paul was back in Latest Orleans, where he was drafted in 2005, to attend the Essence Festival. The NBA vet and HBCU advocate discussed Season 3 of the ESPN+ series Why Not Us, which premieres Aug. 11 and can follow the Southern University Fabulous Dancing Dolls.