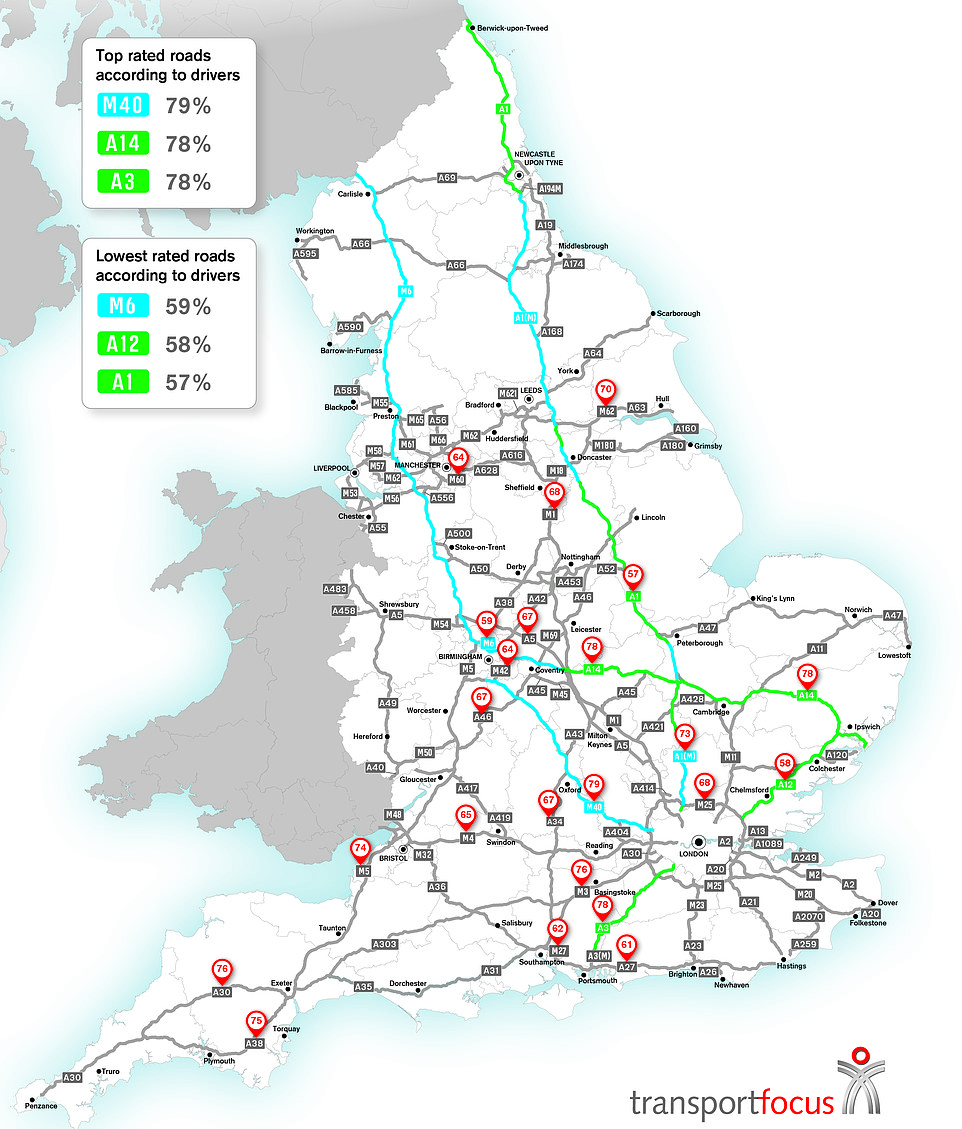 Motorists have had their say on that are the perfect and worst motorways and A-roads within the country – and it is the M40 that has come out on top.

A watchdog polled greater than 5,000 road users about their driving experience on major routes in England, with the worst-rated of all being the longest of all.

The A1, which spans 396 miles and links London and Edinburgh, was slammed by users for having ‘far too many road works with none work going down’ and ‘very, very slow-moving traffic’.

The most effective and worst motorways and A-roads in England have been revealed: Watchdog Transport Focus conducted a poll of greater than 5,000 motorists to find which major route scored worst for driver satisfaction. The M40 got here out top while the A1 was ranked lowest. This graphic plots the three best and three worst

The Strategic Roads User Survey is an annual poll conducted by independent group, Transport Focus and in 2022 has been topped by the M40.

The motorway between London and Birmingham had the best overall satisfaction rating of 79 per cent, beating every other route managed by the Government’s National Highways – public roads, that are the responsibility of local authorities, aren’t included within the poll.

That rating was higher than the general average of 69 per cent – the rating generally given by motorists for the way satisfied they were with their last motorway or major A road journey.

The study asks drivers to rate across various categories, including their overall satisfaction in addition to scores for journey time, how well road works are managed and accomplished, the standard of the road surface, how protected they feel, signage and the usual of data relayed to them on the move by electronic signs – often overhead gantries on smart motorways.

Satisfaction with journey time (67 per cent) continues to be at the same level to overall satisfaction, said the watchdog.

Management of roadworks continues to be the most important headache for drivers, scoring the bottom satisfaction average of 48 per cent. 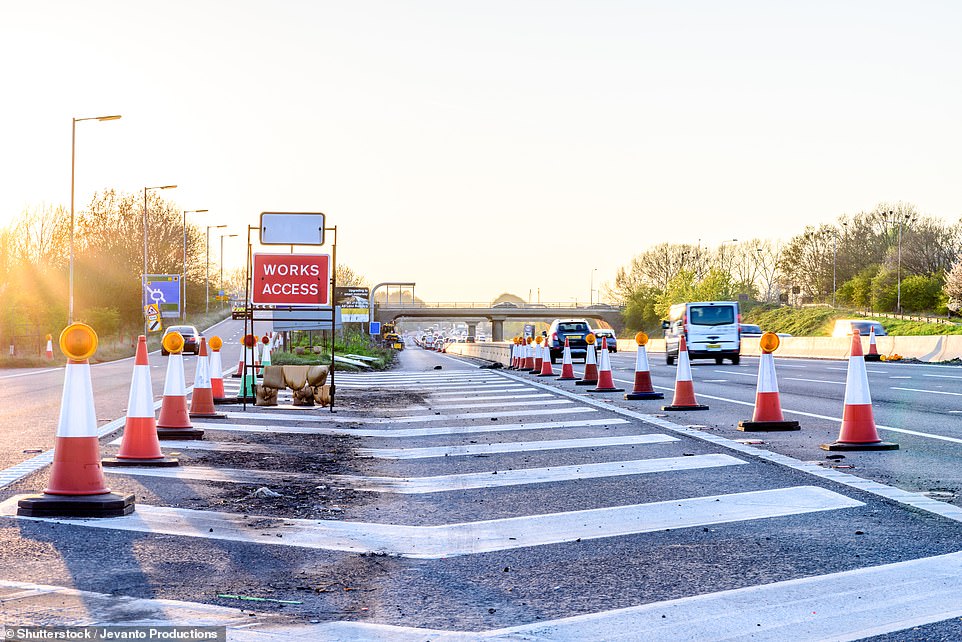 Management of roadworks continues to be one the most important bug bears for drivers, with road users giving a median rating of 48% across all the network of motorways in England 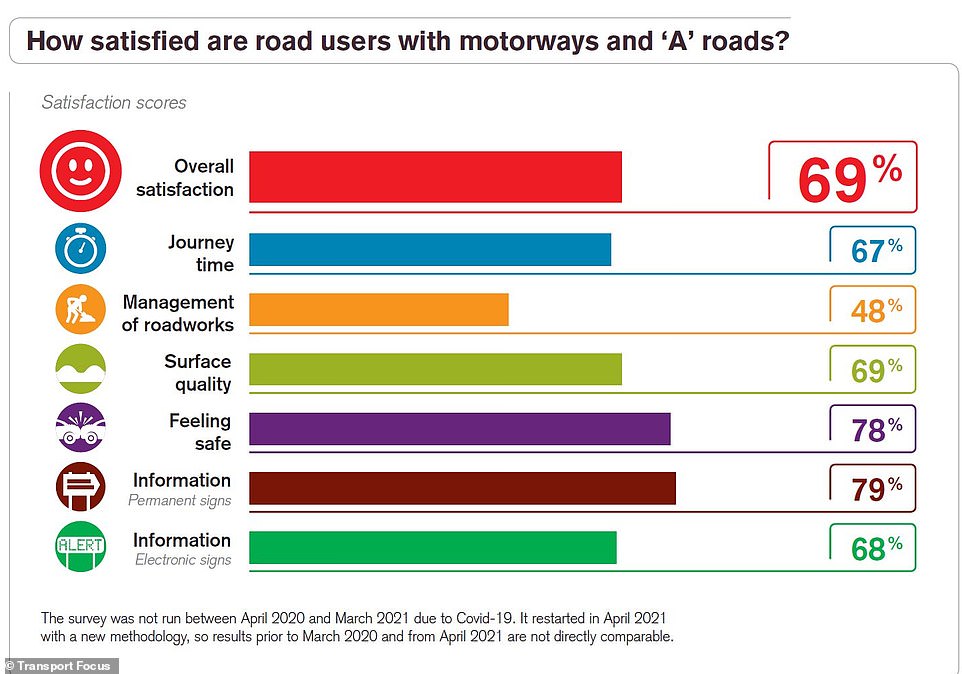 Motorists also still look like uncomfortable counting on electronic signage, with this scoring a 68% rating based on the feedback from 5,246 people

And motorists also still look like uncomfortable counting on electronic signage, with this scoring a 68 per cent satisfaction rating based on the feedback from 5,246 people.

Making the M40 the champion within the motorways league table was not only its highest overall satisfaction rating but the usual of the road surface – a more-than-respectable 80 per cent.

One driver responded to the poll saying: ‘It is the quietest and easiest motorway I exploit.’ One other added: ‘M40 a pleasant wide motorway with rarely an excessive amount of traffic problems.’ 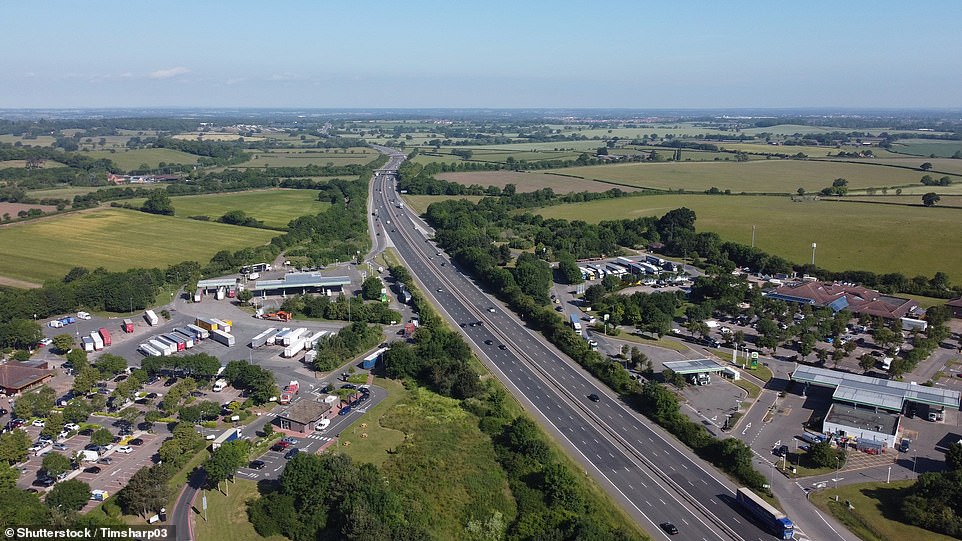 The typical satisfaction rating for motorways and A-roads in England is 68%. The highest-rated route – the M40 – ran over that figure, receiving a 79% overall rating 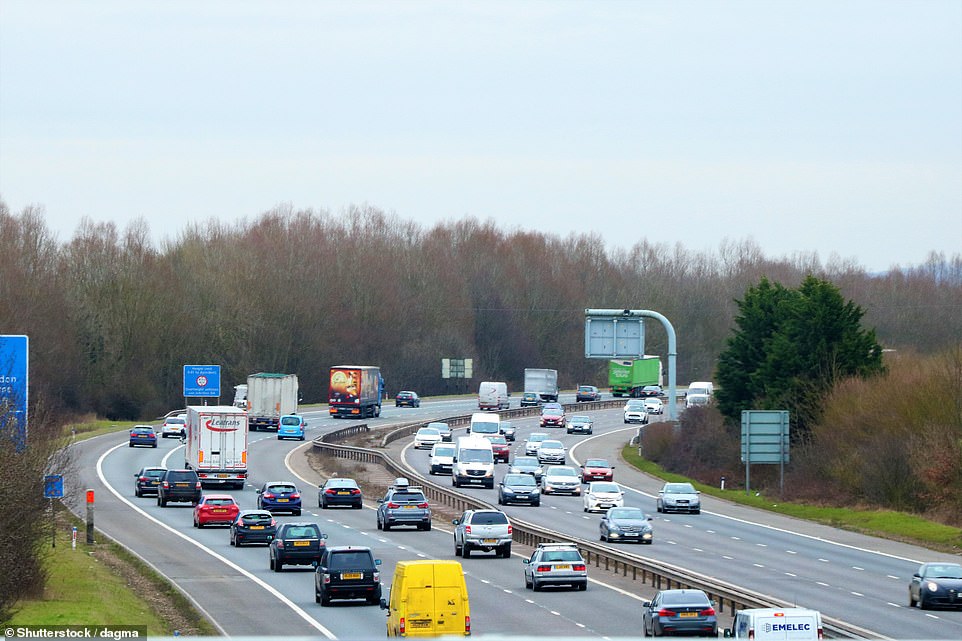 Joint second within the list was the A14 and the A3 with an overall rating of 78 per cent.

Road users praised the brand new section of the A14 between Cambridge and Huntingdon saying it a ‘nice latest road, smooth, no potholes, fast, easy traffic’.

Drivers were least satisfied with the non-motorway sections of the A1, which scored a lowly 57 per cent.

One driver said the A1 has ‘far too many road works with none work going down’, while one other added: ‘traffic very, very slow moving. As all the time at the moment on any weekday.’

The A1(M) motorway parts, nevertheless, were rated at 73 per cent, which is above average.

Also on the foot of the table was the A12 (58 per cent) which also scored lowest for surface quality (41 per cent) and feeling protected (68 per cent). 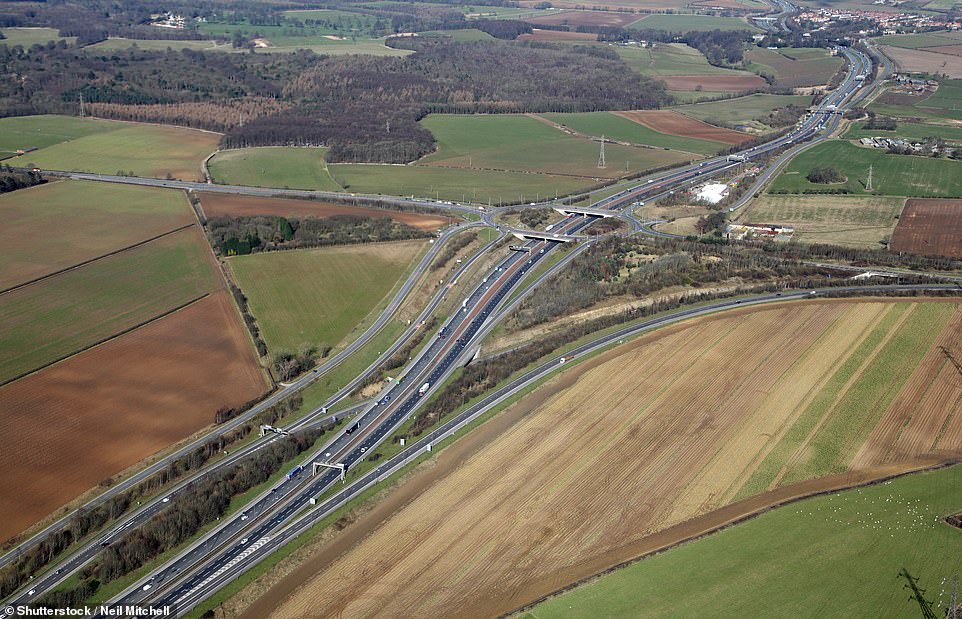 Bottom of the charts was the non-motorway section of the A1, which received the bottom satisfaction rating of 57% 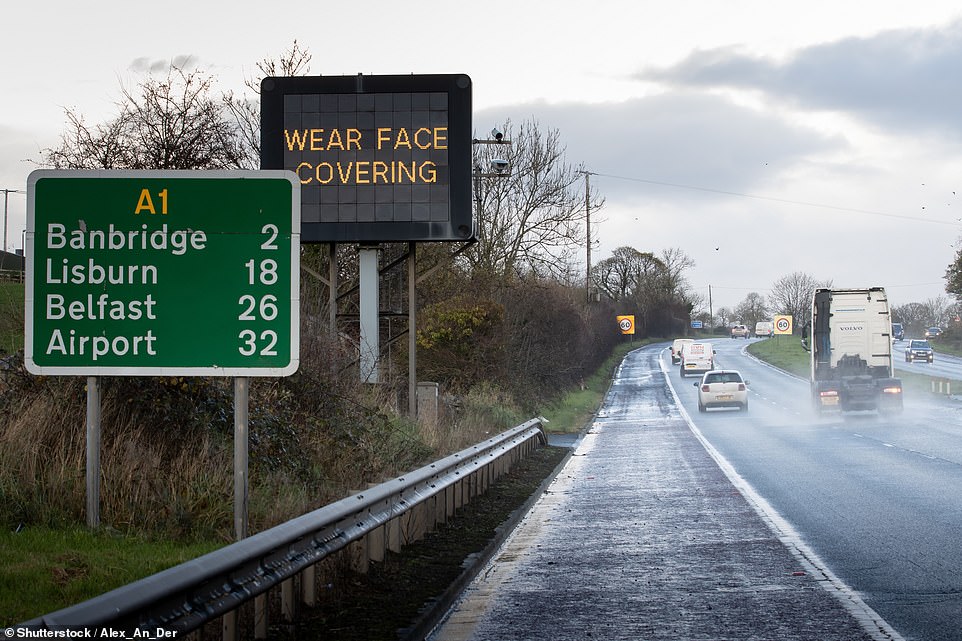 Too many contraflows and slower speed limits for road maintenance was the most important critique of the A1 from drivers, with one survey respondent saying it has ‘far too many road works with none work going down’

Out of the motorways, the M6 has the bottom level of satisfaction (59 per cent).

Many road users commented on not feeling protected on smart motorway sections and the long stretches of reduced speed limit as a result of roadworks.

One driver said: ‘The quantity of roadworks and lane closers with ZERO work activity is beyond sense’, while a fellow motorists commented: ‘The within lane of the M6 (in each directions) are rutted’.

The outcomes also show variation between National Highways’ regions – the South West region scores highest with 72 per cent overall satisfaction, followed closely by the East with 71 per cent. The Midlands region scores the bottom with 67 per cent.

Commenting on the findings of the study, Anthony Smith, chief executive of Transport Focus, said: ‘England’s motorways and major A-roads are its arteries, allowing people and goods to be moved around efficiently.

‘These results show that what drivers experience varies from road to road, with journey time and the way busy it’s being key to journey satisfaction.

‘Because the summer getaway begins, this survey shows the importance of National Highways striving to minimise hold ups and providing good information so drivers know what to anticipate if it would be busy.

‘And it points to the continued have to concentrate on delivering roadworks with the least disruption possible, in addition to keeping road surfaces in good condition.’

The most effective A-road on this 12 months’s results was the A14 between Felixstowe and the Midlands, receiving a 78 per cent overall satisfaction rating from drivers.