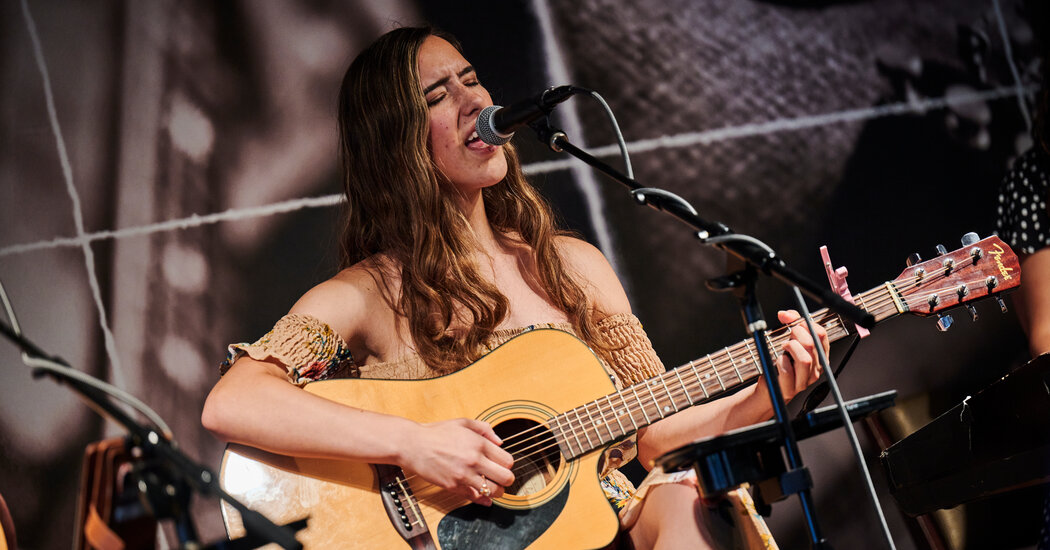 On a recent Sunday night in a Holiday Inn lounge on the perimeter of Vanderbilt University in Nashville, Paul Jefferson, an area songwriter with spiky hair and thin jeans, took the stage to sing a few his better-known tunes, popularized in recordings by Keith Urban and Aaron Tippin. Between “You’re Not My God” and “That’s as Close as I’ll Get to Loving You,” he talked about crafting a song, finding inspiration and the hustle it takes to make it, including playing a gig on the airport on the identical day he would seem on the country’s longest running radio show.

“That’s the Nashville story, from baggage claim to the Grand Ole Opry,” he joked.

For a lot of songwriters, the road to discovery starts in a Nashville club like this one, hosting free or inexpensive writers’ nights where authors play their originals. Prior to now, these showcases were a option to secure publishing and recording deals, and though social media channels and televised talent shows have diminished their power as an audition channel, they continue to be vital forums for most of the artists who provide the words and the melodies to country music and pop stars, or who aim to turn into stars themselves.

“I’m old skool,” Mr. Jefferson said, “but that is an important option to hone your skills.”

For music fans, songwriters’ nights provide a glimpse into Music City’s most celebrated business, as songwriters share stories about how they managed to get a track to the likes of Tim McGraw, and a chance to listen to successful — present or perhaps future — stripped of studio frills and distilled to its essence.

Because clubs still reserve prime weekend time for larger acts, most songwriters’ nights happen early within the week (one exception is the club third and Lindsley, which has a Saturday afternoon showcase). Arriving for a four-day-stay on a Sunday, I checked right into a studio with a Murphy bed at the trendy recent BentoLiving Chestnut Hill ($125) within the Wedgewood Houston neighborhood, a number of miles south of downtown, to attend three shows.

Though Nashville is booming — adding a recent resident each hour for the past decade, in keeping with its mayor, John Cooper, despite the pandemic — it’s not hard to tap into its frugal side on the subject of music (except for the Country Music Hall of Fame and Museum, where admission starts at nearly $28). Many of the shows were free or low-cost ($5 to $10 admission), and budget-friendly dining abounds, from the hearty, cafeteria-style Arnold’s Country Kitchen ($13 for a meat and three side dishes) to the burger joint Joyland from the chef Sean Brock (burgers from about $6).

From novices to pros

On Sundays, Mondays, Wednesdays and Thursdays, the unassuming Commodore Grille within the Holiday Inn, my first stop, hosts Debi Champion’s Songwriters Nights, a starter showcase for budding players, a proving ground for working writers and a warm home for successful veterans.

“The hit author gives aspiring writers a probability to satisfy and check with any person who’s done real good. It’s motivating and inspiring,” said Ms. Champion, who, over the past 30 years, has hosted showcases in Nashville featuring the likes of Jason Aldean and Chris Young on their way up. Ms. Champion is a low-key, familial host, introducing the musicians in her gravelly drawl from a stool on the soundboard behind the darkened room, occasionally providing backup vocals or an completed whistling solo over the mic.

“We call her the champion of songwriters,” said Karree J. Phillips, a songwriter who runs a farm and raises Australian cattle dogs in Carthage, Tenn., and drives about 50 miles into the town to play the showcase a number of times a month.

Over greater than three hours, roughly 20 writers covered a broad range of styles, including a rousing call-and-response number from Ms. Phillips. In an early round, Alexandra Rose sang movingly about dementia. Amongst more seasoned writers, Ryan Larkins, who recently co-wrote a song recorded by “Whispering Bill” Anderson and Dolly Parton, strummed out the bluesy “Love Like a Lincoln,” equating the slow roll of a classic Town Automobile to big-hearted love. Even the novelty tunes — the author and performer Jerry K. Green sang, “Should you think my tractor’s sexy, you oughtta see my plow” — drew hoots from the audience.

Sipping a $6 draft beer, I sat between a pair visiting from California and Jerry Foster, a Nashville Songwriters Hall of Fame member, who showed up in Nashville in May of 1967 and had a cut — or recording — with Charlie Pride by that summer. Along with his partner, Bill Rice, he went on to write down 1000’s of songs. On the showcase, which he calls home, the gregarious showman, 87, played a number of, including “Song and Dance Man,” cut by Johnny Paycheck in 1973, and “The Easy Part’s Over,” recorded by Charlie Pride in 1968 and subsequently by a jazz world legend. “Not many hillbillies got a Louis Armstrong cut, but we did,” he winked.

“We throw parties for them after they hit No. 1,” said Leslie Roberts, an assistant vice chairman within the creative division with BMI, a performing rights organization that collects and distributes royalties to its members over coffee at the trendy recent Virgin Hotels Nashville on Music Row.

“They call Nashville a 10-year town,” she said, referring to the last decade normally required before a author hones their craft and gets established. “You will have to have that dedication to only persevere, since it’s demanding.”

Nashville’s reverence for music is reflected in its biggest attractions, including downtown’s Country Music Hall of Fame and Museum, my next stop, where the unique handwritten lyrics to Kris Kristofferson’s “Me and Bobby McGee” and “I Still Can’t Consider You’re Gone,” by Willie Nelson, were among the many artifacts on display.

By midday, a number of blocks away on Nashville’s famous honky-tonk strip of Lower Broadway, music spilled out of each bar. From one club’s open window, a girl sang to passers-by, belting out a canopy of the Zac Brown Band’s “Chicken Fried.” The whooping passengers of pedal trolleys and party buses loudly rolled past.

After 4 mostly club-concentrated blocks, Broadway ends at a greenway beside the Cumberland River where Jack Springhill, a street musician, strummed the Doobie Brother’s “Black Water” on an acoustic guitar for suggestions. He considers himself “the wasabi palate-cleanser” to the Broadway gauntlet, or what he called “the brand new Vegas,” and played his own humorous original, “Batman Loves You,” which hails the superhero who “likes to listen while you speak, it’s his favorite technique.”

In comparison with raucous Broadway, the Listening Room Cafe, a club lodged in a former International Harvester showroom within the SoBro neighborhood just a number of blocks away, is a sanctuary for songs meant to be heard, moderately than shouted over. Rows of tables, full of an all-ages audience nibbling on barbecued pork, run as much as the theatrically lit stage.

“People on the lookout for the true Nashville, if we’re lucky, they discover about this, or any writers’ room,” said Todd Cassetty, the founding father of the club’s Monday night showcase, Song Suffragettes, featuring an all-female lineup of singer-songwriters.

Song Suffragettes was born in 2014, inspired by the dearth of girls within the genre; only about 14 percent of songs played on country radio annually were written by women, in keeping with research from the SongData Project, which explores music culture.

In its eight-year run, Song Suffragettes has vetted greater than 2,000 applicants, inviting about 350 women to perform. Of those, roughly 75 have landed recording or publishing deals. Breakout stars include the singer Gayle, whose pop anthem “ABCDEFU” topped charts world wide in 2021.

That night, Kaylin Roberson led the quintet of 20-somethings on the homey stage with a shag rug, canvas backdrop and five mismatched chairs. Each round began with the full-throated Paige Rose, whose “Whiskey Drinker” sounded ready for radio. Julie Williams brought social realism to her songs about being mixed race, including the hummable “Mixed Feelings.” Sam Hatmaker’s takes on female empowerment were raw and urgent. Sasha McVeigh, the one first-timer, thanked the audience for being here for her “bucket-list moment.”

A sixth performer, Mia Morris, 18, is the one regular on the showcase, adding beats to every song from atop the cajon, a box-shaped percussion instrument.

After the show, Ms. Roberson, the sunny M.C. wearing orange bell bottoms and a black camisole, talked in regards to the convention-challenging content of the Suffragettes’ songs compared with popular country music.

“Country music radio is basically far behind,” said the irrepressible singer-songwriter who that night would seem in a pre-taped episode of “American Idol,” airing her successful audition for the show.

The concept of a writers’ night didn’t start at the Bluebird Cafe, the legendary club in a modest strip mall five miles from downtown where Garth Brooks was discovered and Taylor Swift was recruited to a recent recording start-up. However it became synonymous with them, popularized in movies (including Peter Bogdanovich’s 1993 film “The Thing Called Love”) and tv (the series “Nashville”).

Songwriters proceed to return to the Bluebird, which turned 40 in June, “to be recognized for the creativity and talent that they’re, to be really celebrated because the people who find themselves the bedrock of the music and as a proving ground for the song,” said Erika Wollam Nichols, the final manager of the Bluebird. “Should you’re sitting on this room, up against a bunch of individuals’s grills, you already know whether your song’s working or not.”

Aspiring songwriters audition to make the Bluebird’s selective Sunday night showcase (free admission, $10 food and beverage minimum). Other hopefuls try for a spot within the Monday night open mic (free), which has turn into so popular the club went to online registration.

Established writers headline shows the remainder of the week (normally $10 to $15 admission). A recent show featured the Warren Brothers, Brett and Brad, who’ve been writing together for greater than 25 years, producing a string of hits, including nine No. 1s.

“Each time we get a probability to play on the Bluebird, we at all times say yes,” Brett told the audience. “It’s only a magical place.”

To the packed room of about 80 clustered at tables only a foot below the stage, the pair played a solid hour of radio hits, from the haunting “The Highway Don’t Care” to the sensual “Felt Good on My Lips,” each recorded by Tim McGraw. A girl from Florida sitting beside me liked their version of “Little Little bit of Every thing” over Keith Urban’s.

By the point they got to “Red Solo Cup,” a 2011 ode to drinking recorded by Toby Keith that also reverberates in school keggers, the audience was singing along, “Red solo cup, I fill you up, let’s have a celebration … proceed to party.”

“I do know what you’re pondering,” Brett interjected as they played the bouncy tune. “If that’s what you gotta write to be successful country songwriter, I’m moving to Nashville.”