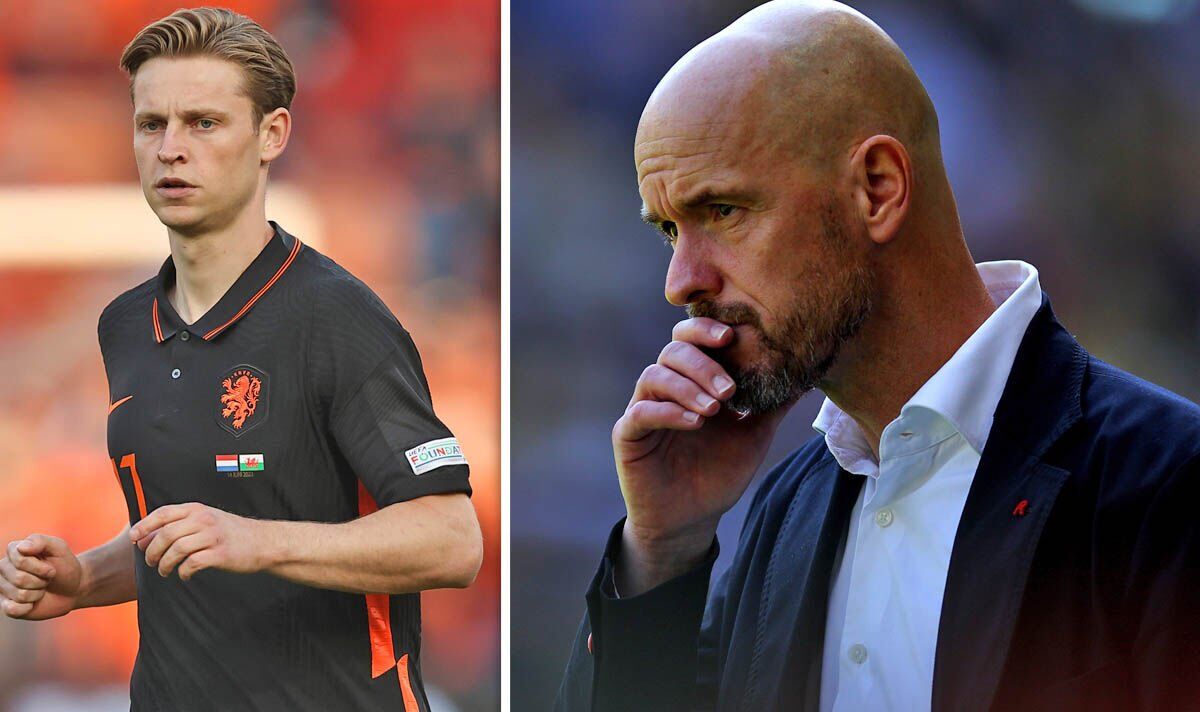 Manchester United boss Erik ten Hag is reportedly ‘beginning to get frustrated’ on the club’s pursuit of Frenkie de Jong. The Netherlands international is his compatriot’s top transfer goal for the summer window. But talks with Barcelona are being dragged out and there’s still no guarantee the 25-year-old will make a blockbuster switch to Old Trafford.

Manchester United have been attempting to sign De Jong for weeks, now.

But negotiations have been slow and, at the present moment in time, the Red Devils have been unable to agree a fee with Barcelona – despite the Catalan giants’ willingness to let the midfielder go.

And, now, The Athletic say murmurings suggest Ten Hag is ‘beginning to get frustrated’ almost about the deal.

The Dutchman is alleged to ‘understand’ the club’s budgetary constraints after they did not qualify for the Champions League, ending sixth within the Premier League table last term.

The club are operating on a budget of around £120million and the 52-year-old knows he would have the opportunity to afford additional recruits if Barcelona accept a lower offer.

But Ten Hag wants De Jong signed as quickly as possible in order that they can prepare for the longer term and take a look at other targets.

And United could further boost their budget by selling stars who their latest manager has deemed surplus to requirements.

Dean Henderson is looking increasingly prone to go, with Nottingham Forest hoping to secure the signature of the England international this summer.

Aaron Wan-Bissaka is one other player who’s heading for the door, while Anthony Martial can even be allowed to go away providing an acceptable offer arrives.

De Jong isn’t the one star United have into account as they appear to bounce back from last season’s horror show.

Jurrien Timber and Pau Torres have each been linked, though the previous looks increasingly prone to stay at Ajax – especially with the World Cup in Qatar creeping closer.

Other midfielders on their radar include Ruben Neves, Declan Rice and Kalvin Phillips.

And, up top, United have interest in each Christopher Nkunku and Antony.

Meanwhile, regarding De Jong, Luke Chadwick has endorsed a move for the Barcelona star.

Speaking recently, he said: “I definitely think the club should go for somebody like De Jong. United need latest options in the course of the pitch, and he’s a hugely gifted player.

“We’re not aware of his situation or every little thing that’s being said behind closed doors, however it does look like every Ajax player past and present is being linked with United since Ten Hag got the job.

“I’m sure those Dutch players in that incredible team that Ten Hag built at Ajax would relish the chance to work with him again.

“I’m sure someone like De Jong would at the very least want the chance to talk to the club.

“He suits the profile, he’s a very different character to Pogba by way of how he conducts himself off the pitch.

“In my eyes, the player, but not knowing your entire situation, admittedly, I feel United should go for him.

“I feel he ought to be considered due to what he did at Ajax under Ten Hag previously.”