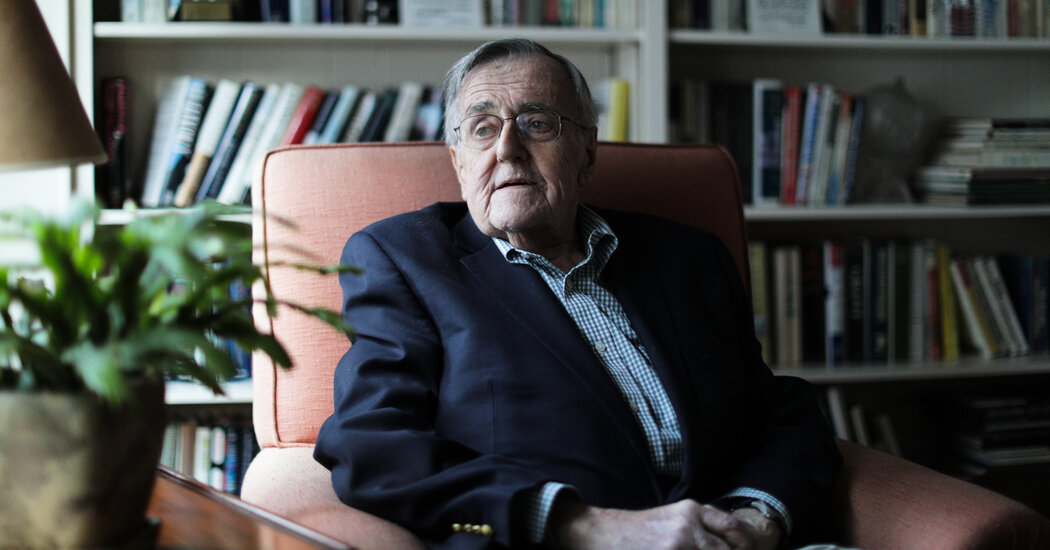 Mark Shields, a piercing analyst of America’s political virtues and failings, first as a Democratic campaign strategist after which as a television commentator who each delighted and rankled audiences for 4 a long time along with his bluntly liberal views and sharply honed wit, died on Saturday at his home in Chevy Chase, Md. He was 85.

His daughter, Amy Shields Doyle, said the cause was complications of kidney failure.

Politics loomed large for Mr. Shields even when he was a boy. In 1948, when he was 11, his parents roused him at 5 a.m. so he could glimpse President Harry S. Truman as he was passing through Weymouth, the Massachusetts town south of Boston where they lived. He recalled that “the primary time I ever saw my mother cry was the night that Adlai Stevenson lost in 1952.”

A life immersed in politics began in earnest for him within the Sixties, not long after he had finished two years within the Marines. He began as a legislative assistant to Senator William Proxmire of Wisconsin.

He then struck out on his own as a political consultant to Democratic candidates; his first campaign on the national level was Robert F. Kennedy’s ill-fated presidential race in 1968. Mr. Shields was in San Francisco when Kennedy was assassinated in Los Angeles. “I’ll go to my grave believing Robert Kennedy would have been the most effective president of my lifetime,” he told The Latest York Times in 1993.

He had successes, like helping John J. Gilligan turn out to be governor of Ohio in 1970 and Kevin H. White win re-election as mayor of Boston in 1975. But he was actually no stranger to defeat; he worked for men who vainly pursued national office within the Nineteen Seventies, amongst them Edmund S. Muskie, R. Sargent Shriver and Morris K. Udall.

“At one point,” Mr. Shields said, “I held the N.C.A.A. indoor record for concession speeches written and delivered.”

Because the Nineteen Seventies ended, he selected a special path. Thus began a protracted profession that made him a fixture in American political journalism and punditry.

He started off as a Washington Post editorial author, however the inherent anonymity of the job discomfited him. He asked for, and got, a weekly column.

Before long, he set out on his own. While he continued writing a column, which got here to be distributed each week by Creators Syndicate, it was on television that he left his firmest imprint.

From 1988 until it was canceled in 2005, he was a moderator and panelist on “Capital Gang,” a weekly CNN talk show that matched liberals like Mr. Shields with their conservative counterparts. He was also a panelist on one other weekly public affairs program, “Inside Washington,” seen on PBS and ABC until it resulted in 2013.

In 1985, he wrote “On the Campaign Trail,” a somewhat irreverent take a look at the 1984 presidential race. Through the years he also taught courses on politics and the press at Harvard and the University of Pennsylvania.

His longest stretch was as a commentator on “PBS NewsHour” from 1987 through 2020, when he decided at age 83 to finish his regular gig. A self-described Latest Deal liberal, Mr. Shields was the counterpoint to a succession of conservative thinkers, including William Safire, Paul Gigot, David Gergen and, for the last 19 years, David Brooks.

In a panegyric to his colleague, Mr. Brooks wrote in his Latest York Times column in December 2020 that “to this present day Mark argues that politics is about on the lookout for converts, not punishing heretics.”

Mr. Shields’s manner was rumpled, his visage increasingly jowly, his accent unmistakably Latest England. He got here across, The Times observed in 1993, as “only a guy who likes to argue about current events on the barbershop — the pundit round the corner.”

His calling card was a no-nonsense political sensibility, infused with audience-pleasing humor that punctured the dominant character trait of many an office holder: pomposity. Not surprisingly, his targets, archconservatives conspicuous amongst them, didn’t take kindly to his arrows. And he didn’t all the time adhere to modern standards of correctness.

Of President Donald J. Trump, Mr. Shields said dismissively that “the hardest thing he’s ever done was to ask Republicans to vote for a tax cut.” The House Republican leader Kevin McCarthy was “an invertebrate”; Senator Lindsey Graham made Tonto, the Lone Ranger’s loyal sidekick, “appear to be an independent spirit.” In each major parties, he said, too many are afflicted with “the Rolex gene” — making them money-hungry caterers to the rich.

Asked in a 2013 C-SPAN interview which presidents he admired, he cited Gerald R. Ford, a Republican who took office in 1974 within the wake of the Watergate scandal. Ford, he said, was “essentially the most emotionally healthy.”

“Not that the others were basket cases,” he said, but “they get that bug, and because the late and really great Mo Udall, who sought that office, once put it, the one known cure for the presidential virus is embalming fluid.”

Politics, he maintained, was “a contact sport, an issue of accepting an elbow or two,” and losing was “the unique American sin.”

“People give you very creative excuses why they will’t be with you if you’re losing,” he said. “Like ‘my nephew is graduating from driving school,’ and ‘I’d like to be with you but we had a family appointment on the taxidermist.’”

Still, for all their foibles, he had an abiding admiration for politicians, be they Democrats or Republicans, simply for entering the sector.

“Whenever you dare to run for public office, everyone you ever sat next to in highschool homeroom or double-dated with or car-pooled with knows whether you won or, more likely, lost,” he said. “The political candidate dares to risk the general public rejection that the majority of us will go to any length to avoid.”

Mark Stephen Shields was born in Weymouth on May 25, 1937, one among 4 children of William Shields, a paper salesman involved in local politics, and Mary (Fallon) Shields, who taught school until she married.

“In my Irish American Massachusetts family, you were born a Democrat and baptized a Catholic,” Mr. Shields wrote in 2009. “In case your luck held out, you were also brought as much as be a Boston Red Sox fan.”

He attended schools in Weymouth after which the University of Notre Dame, where he majored in philosophy and graduated in 1959. With military conscription looming, he selected in 1960 to enlist within the Marines, emerging in 1962 as a lance corporal. He learned quite a bit in those two years, he said, including concepts of leadership encapsulated in a Marine tradition of officers not being fed until their subordinates were.

“Wouldn’t our country be a more just and human place,” he wrote in 2010, “if the brass of Wall Street and Washington and executive suites believed that ‘officers eat last’?”

As he set out on his profession in politics, he met Anne Hudson, a lawyer and federal agency administrator. They were married in 1966. Along with his daughter, a television producer, he’s survived by his wife and two grandchildren.

There have been bumps along the road, including a period of excessive drinking. “If I wasn’t an alcoholic, I used to be probably a reasonably good imitation of 1,” he told C-SPAN, adding: “I even have not had a drink since May 15, 1974. It took me that long to search out out that God made whiskey so the Irish and the Indians wouldn’t run the world.”

A few of his happiest moments, he said, were when he worked on political campaigns: “You think that you will make a difference that’s going to be higher for the country, and particularly for widows and orphans and folks who don’t even know your name and never will know your name. Boy, that’s probably nearly as good because it gets.”