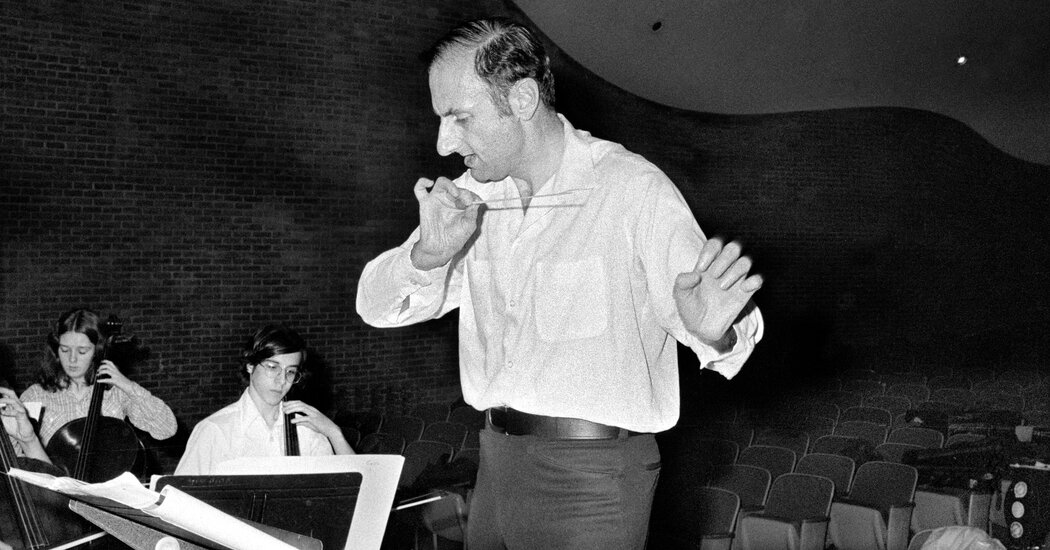 Martin C. Dreiwitz, who drew on his twin passions for travel and classical music to found the globe-trotting Long Island Youth Orchestra, conducting his student musicians before audiences as close as Great Neck and Brookville and as far-off as Karachi and Kathmandu, died on June 20 at a hospital near his home in Oyster Bay, N.Y. He was 91.

Steven Behr, the president of the orchestra’s board of directors, said the cause was a heart attack.

The orchestra could have counted some 100 performers, but Mr. Dreiwitz (pronounced DRY-witz) was practically a one-man show: He raised the funds, he scouted for brand new members, he cajoled parents to bring snacks on rehearsal days, and he conducted every performance from its founding in 1962 to his retirement in 2012.

He was also the orchestra’s travel agent. Along with playing 4 live shows a 12 months, mostly at a performance hall on the campus of Long Island University Post in Brookville, N.Y., the orchestra went on a summer tour, almost all the time abroad, with multiple stops and infrequently on multiple continents. One trip, in 1977, took them to Greece, Kenya, the Seychelles, India, Sri Lanka and Israel, with every detail arranged by Mr. Dreiwitz.

Though he trained as a classical clarinetist, Mr. Dreiwitz was, actually, a travel agent by trade, and he used his skills and connections to plot intricate journeys that even knowledgeable orchestra might shrink from. He took pride in being among the many first Western orchestras to play in places like Pakistan and Nepal, performing sold-out shows with students who often had never before left Long Island.

He treated his musicians like adults, and saw his mission as one less about pedagogy than about preparation for knowledgeable music profession. He eschewed the everyday youth orchestra fare — Aaron Copland’s “Fanfare for the Common Man,” Samuel Barber’s “Adagio for Strings” — in favor of deep cuts from Mozart and Rossini and avant-garde composers like Virgil Thomson (a private friend, who sometimes used the orchestra to test-run his latest work).

He also tended to keep away from Broadway scores, though he did have a soft spot for the music of George Gershwin, especially “Porgy and Bess,” and infrequently included selections from that opera on the orchestra’s summer tour.

But he also simply loved the challenge of planning, say, a five-week trip for 85 students across five countries in East Asia. In between raising money and running rehearsals, in the course of the school 12 months he would dash off on reconnaissance trips, scouting each site for an upcoming tour — arranging hotels (or simply as often private homes), trying out venues, even taste-testing restaurants. When the scholars arrived, months later, all the things could be perfect.

The orchestra ran on a shoestring budget, especially early on, when Mr. Dreiwitz refused to charge tuition. As a substitute, funds got here from family donations, annual candy sales and, very often, his own pocket. Every spring he offered a $2,500 scholarship to be split among the many three best highschool seniors, as judged by an outdoor panel.

Mr. Dreiwitz’s labor paid off. The orchestra’s 4,000 (and counting) alumni have gone on to play in most of the country’s major corporations, including the Boston Symphony Orchestra, the Recent York Philharmonic, and the Philadelphia Orchestra, they usually populate countless chamber groups and academic music departments.

Mr. Dreiwitz might be stern and exacting on the rostrum, but, a lot of his former musicians said, he ran the orchestra like a family, fostering a vibe of collegiality as a substitute of competitiveness.

“I don’t twist anyone’s arm to hitch,” he told The Recent York Times in 1964. “They’re giving up their very own time because they love music and need a possibility to play. I don’t think you could find a more enthusiastic group of musicians anyplace.”

Martin Charles Dreiwitz was born in Weehawken, N.J, on June 15, 1931, and raised in Brooklyn. His father, Samuel Dreiwitz, worked within the fur industry, and his mother, Charlotte (Silver) Dreiwitz, was a homemaker.

A gifted musician whilst a toddler, he played clarinet and graduated from the High School of Music and Art in Manhattan (now the Fiorello H. LaGuardia High School of Music & the Arts), and he majored in music on the University of Chicago. Along the best way he studied under woodwind luminaries like Simeon Bellison, the principal clarinetist for Recent York Philharmonic, and Anthony Gugliotti, who held the identical post with the Philadelphia Orchestra.

After graduating from college in 1953, he moved to Europe, where he traveled and studied to be a conductor, including a stint with Wilhelm Furtwängler in Vienna.

He returned to america within the early Nineteen Sixties and settled in suburban Long Island, hoping to search out a job conducting. To make ends meet, he took a job as a travel agent and offered private clarinet lessons on the side.

At some point in 1962, one among his particularly talented students put down his instrument and frowned.

“I’ve gotten this far,” Mr. Dreiwitz recalled the scholar saying, “and now I need to wait years, until I get into a significant orchestra, before I get some really good experience. Where do I’m going from here?”

The seed was planted, and took root: Mr. Dreiwitz held auditions for what he initially called the North Shore Symphony Orchestra in September 1962. He began with just 52 musicians, they usually held a concert the subsequent spring. A number of years later, he took them on their first trip, to Chicopee, Mass.

It was stop and go within the early years, with Mr. Dreiwitz hitting up Nassau County music teachers to search out promising players. But by the top of the Nineteen Sixties, he not needed to. Eager students lined up outside his travel agency to audition, and each 12 months he had a wait list. The orchestra went on its first overseas trip, to Europe, in 1971.

He took emeritus status in 2012, handing the baton to Scott Dunn, a former student. He continued to are available to rehearsals at L.I.U. Post, though less and fewer often, after which in no way.

But Mr. Dreiwitz had another hurrah. In 2018, a whole lot of alumni returned for a concert in his honor, and he even mounted the rostrum, to conduct a variety from his beloved “Porgy and Bess.”