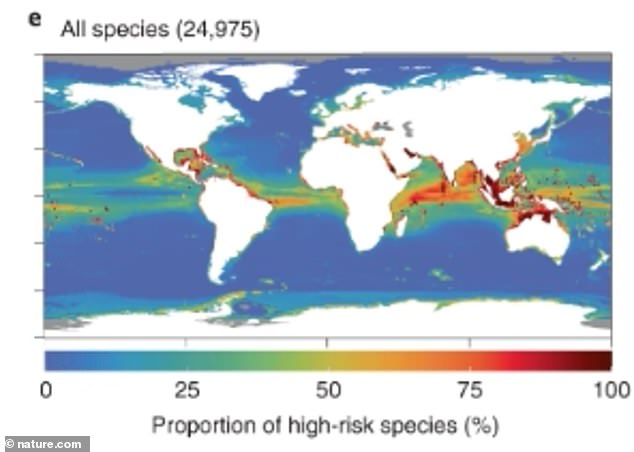 Mass extinction of as much as 90 PERCENT of all marine species could occur by the top of the century if greenhouse gasses aren’t curbed, recent study warns

Nearly 90 percent of all marine species are at high or critical risk of going extinct by the top of the century if humans don’t curb greenhouse emissions, a recent study warns.

A team of researchers led by Dalhousie University in Canada, evaluated climate risks of nearly 25,000 species that live within the upper 328 feet of the ocean and located a great amount will disappear from the planet by 2100 if emissions proceed to remain at high levels or a ‘business as usual’ scenario.

This could see a mass die-off of hundreds of animals, plants, chromists, protozoans and bacteria that decision the world’s oceans their home.

The evaluation shows that a ‘disproportionately large number’ of sharks, rays and mammals are at high or critical climate risk – 75 percent of them are predicted to go extinct by 2100.

All the threatened species also live in among the most biodiverse ecosystems within the Gulf of Thailand, the Coral Triangle, northern Australia, the Red Sea, the Persian Gulf, nearshore India, the Caribbean and a few Pacific islands.

The study checked out nearly 25,000 marine species to find out what number of will disappear by the top of the century resulting from human-made greenhouse gases – and the team found up tp 90 percent

The study also found that the highest predators are more susceptible to extinction than those lower on the food chain, in line with the study published in Nature.

The team focused on the species living within the upper region of the ocean because that is ‘where climate-driven temperature changes are probably the most severe.’

The very best vulnerability was found amongst large, long-lived species which can be heavily exploited and of critical conservation concern.

The study notes, for instance, the Chinese puffer at a highly impacted nearshore site near China under the high-emission scenario. 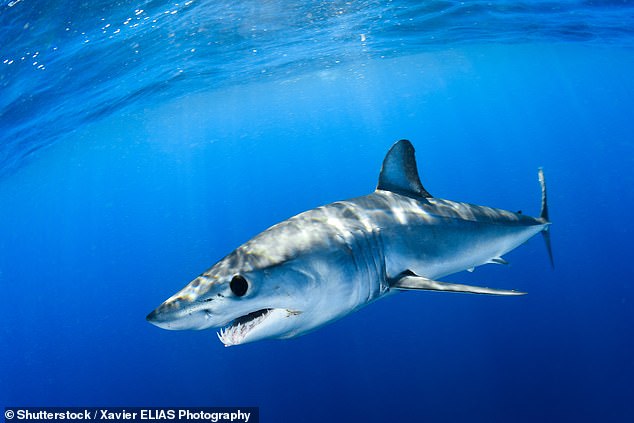 The evaluation shows that a ‘disproportionately large number’ of sharks, rays and mammals are at high or critical climate risk – 75 percent of them are predicted to go extinct by 2100. Pictured is a mako shark that has been listed as endangered since 2018 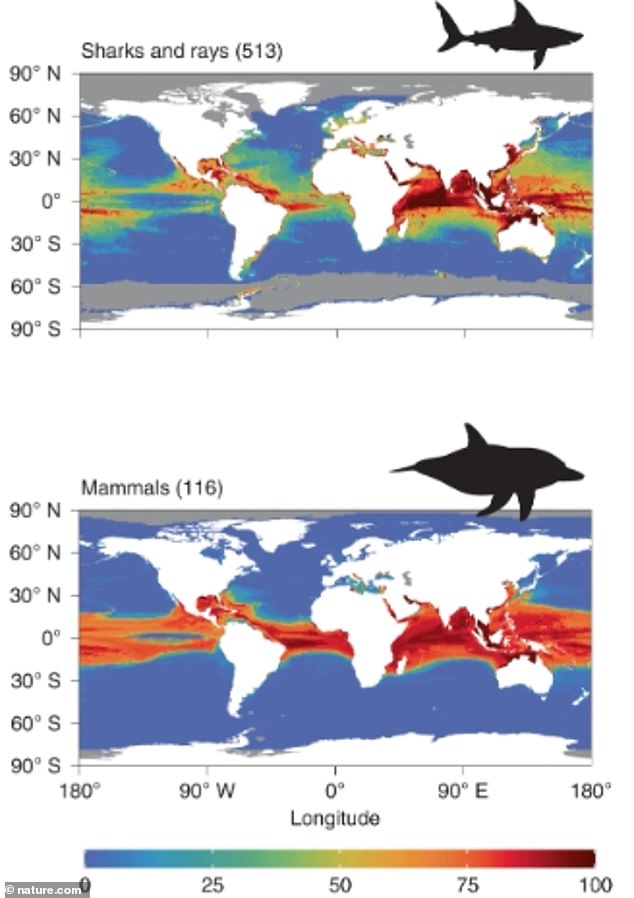 The study also found that the highest predators are more susceptible to extinction than those lower on the food chain. In the event that they do extinct, the absence will upheave the ecosystem. The map above shows where sharks are threatened and below highlights mammals

The Galapagos damselfish, which lives across the Galapagos Islands and the coast of Costa Rica, are also deemed in the very best vulnerability group.

The bottom vulnerability rating is for a shorter-lived, vertically migrating, mesopelagic, pan-global species, the bluntsnout lanternfish, at an offshore site under the low-emission scenario.

Daniel Boyce, an ecologist on the Bedford Institute of Oceanography, and creator of the study told ABC News the findings are ‘quite startling and really sobering’.

‘I’d wish to think that that is an implausible scenario,’ Boyce said.

‘But nonetheless, it’s the worst-case scenario. And once we evaluated that scenario, we found that there was a really grim picture for the climate risk for marine species.’

Not only would these creatures now not roam the seas, but their disappearance has great consequences for the ecosystem, as it could disrupt the food chain.

The last time 90 percent of life was wiped from Earth was 252 million years ago during what’s dubbed the Great Dying.

Scientists have linked what has change into often called the ‘Great Dying’ with a series of massive volcanic eruptions in Siberia that filled the atmosphere with greenhouse gas.

Spewing carbon and methane into the atmosphere for roughly 2 million years, the eruption helped extinguish about 96 percent of oceanic life and 70 percent of land-based vertebrates – the biggest extinction event in Earth’s history.

WHAT WAS THE PERMIAN MASS EXTINCTION, KNOWN AS ‘THE GREAT DYING’ THAT KILLED 9 OUT OF EVERY 10 SPECIES?

Around 248 million years ago, the Permian period ended and the Triassic period began on Earth.

Marking the boundary between these two geologic eras is the Permian mass extinction, nicknamed ‘The Great Dying’.

This catastrophic event saw just about all life on Earth worn out.

Scientists imagine around 95 per cent of all marine life perished through the mass extinction, and lower than a 3rd of life on land survived the event.

In total, it’s believed that 90 per cent of all life was worn out.

All life on Earth today is descended from the roughly ten per cent of animals, plants and microbes that survived the Permian mass extinction.

Previously, it was believed an enormous eruption blanketed the Earth in thick smog, blocking the sun’s rays from reaching the planet’s surface.

Nevertheless, recent findings suggest a large volcanic eruption that ran for nearly a million years released an enormous reservoir of deadly chemicals into the atmosphere that stripped Earth of its ozone layer.

This eradicated the one protection Earth’s inhabitants had against the sun’s deadly UV rays.

This high-energy type of radiation could cause significant damage to living organisms, causing the death toll to skyrocket.