May’s best NBA photos: 20 images you would possibly have missed 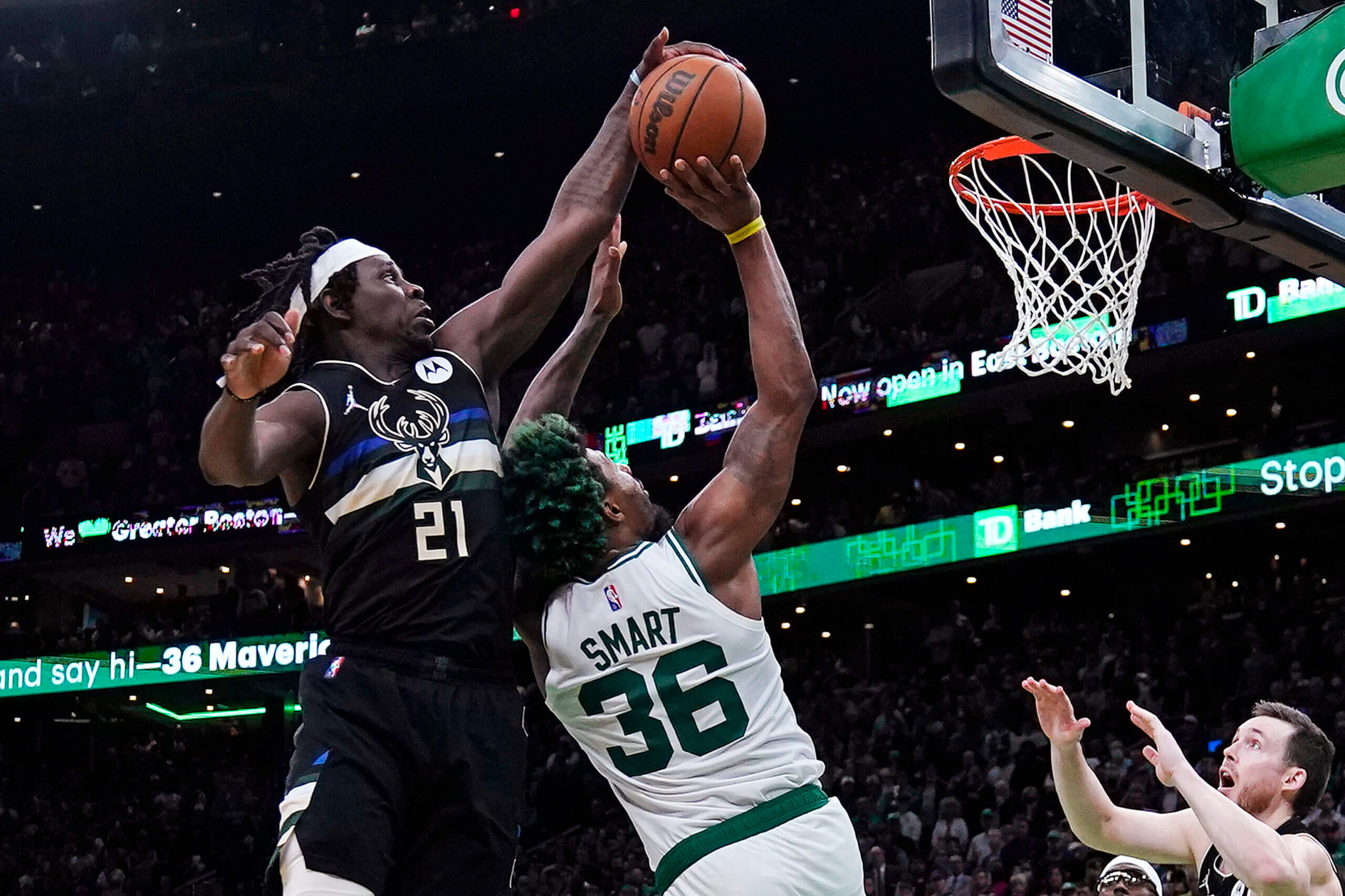 After a grueling month of playoff basketball, the NBA Finals are set.

After missing the playoffs in 2020 and ’21, the Warriors are returning to a well-recognized stage. That is their sixth NBA Finals appearance in eight years. When Game 1 begins Thursday, Golden State will battle the Boston Celtics, a franchise that knows lots about winning titles.

The teams split their games in the course of the regular season. Steph Curry scored 30 points as Golden State won at Boston 111-107 on Dec. 17. The Celtics returned the favor in San Francisco on March 16, routing the Warriors 110-88.

Until a champion is crowned, The Athletic will proceed choosing stunning and powerful images. Catch a glimpse of a few of May’s NBA playoff motion on this month’s photo gallery.

In Game 5 of the Eastern Conference semifinals, Jrue Holiday saves the sport for the Bucks with several stellar defensive plays, including this block of Marcus Smart’s shot with 9.3 seconds remaining in Boston. The Bucks won 110-107. (Charles Krupa / Associated Press) 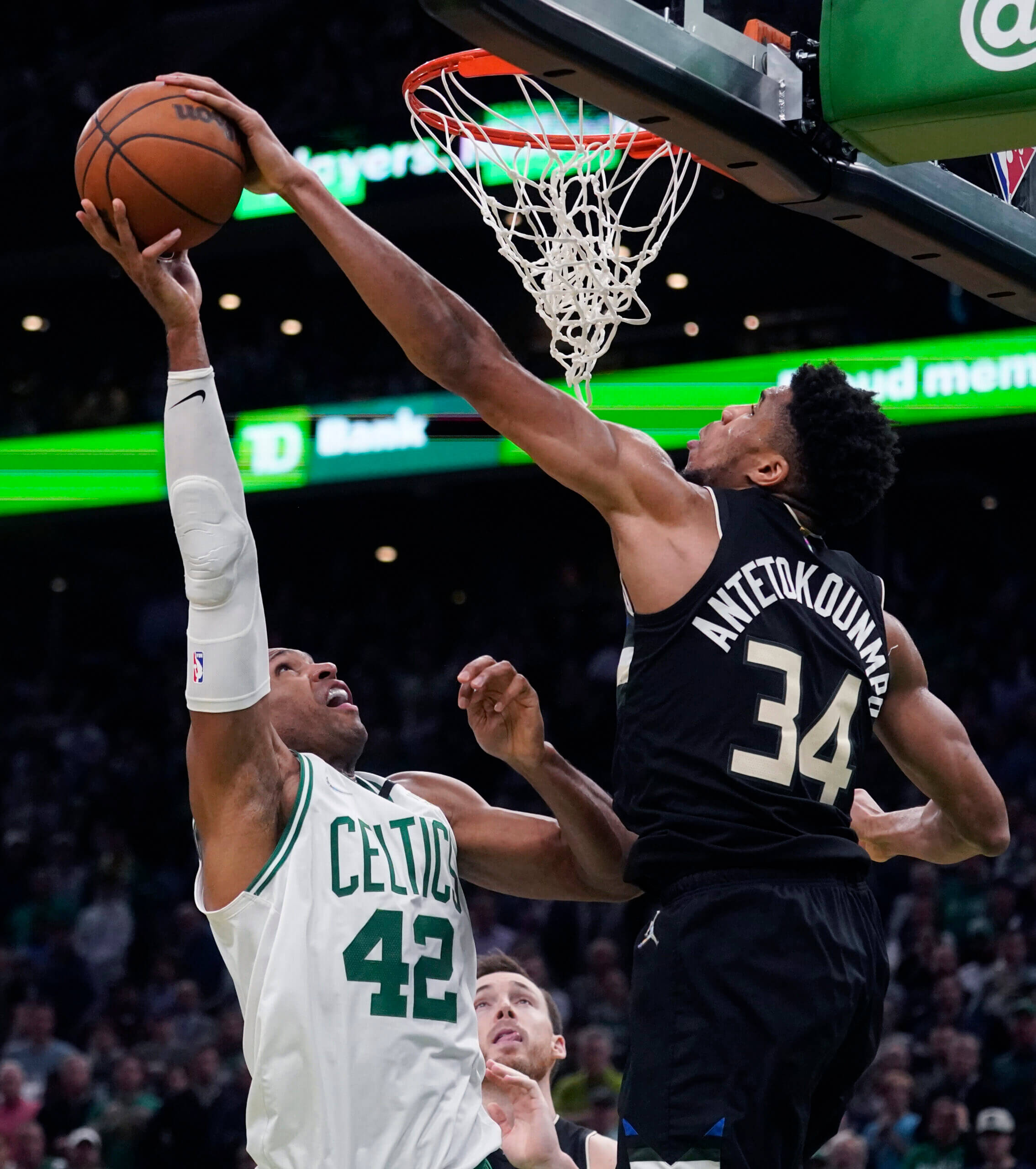 Giannis Antetokounmpo of the Bucks knows all about blocking shots as he denies Al Horford of the Celtics in Game 5 of the Eastern Conference semifinals in Boston. (Charles Krupa / Associated Press) 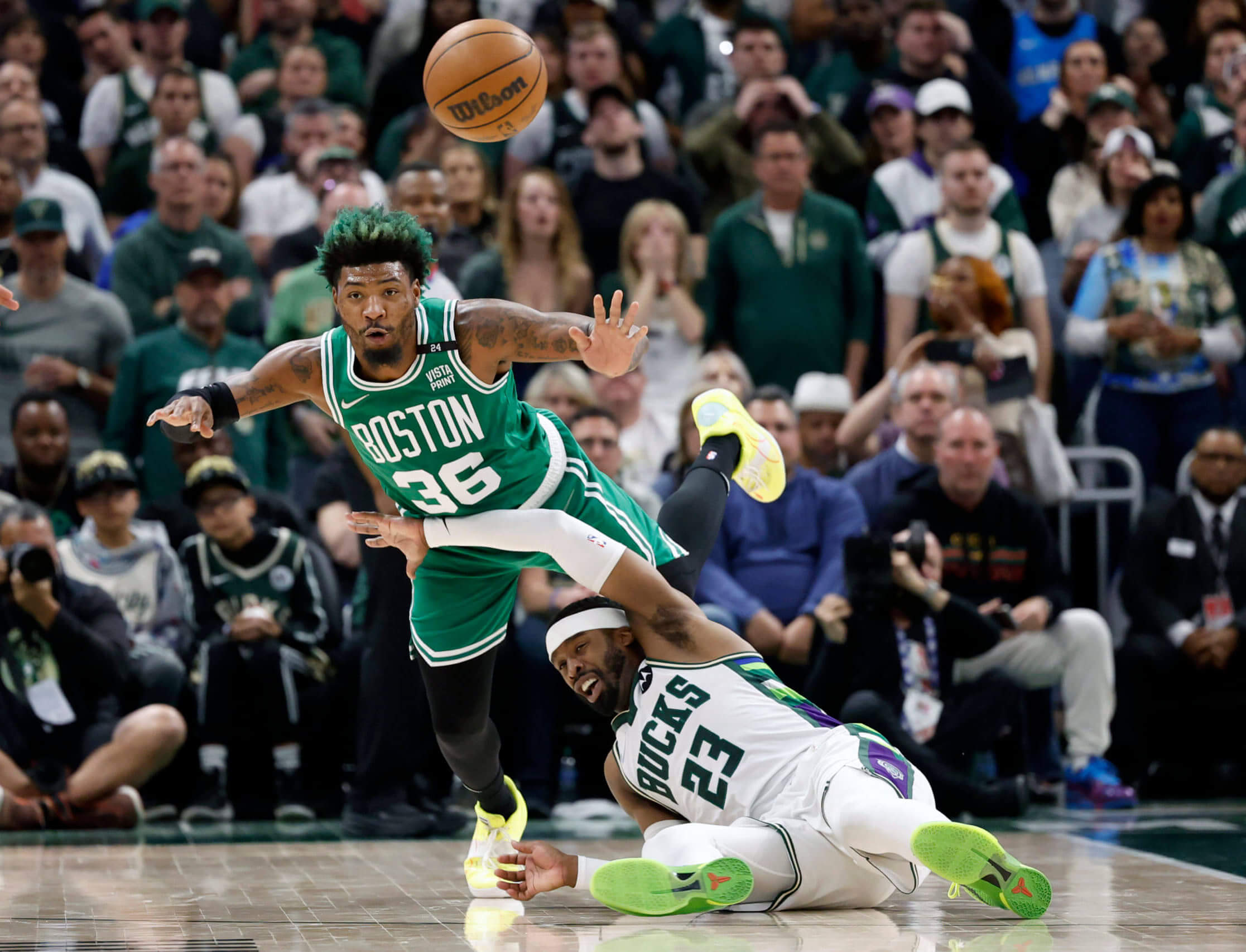 Why was Marcus Smart the NBA Defensive Player of the 12 months? Just ask Wesley Matthews and the Bucks. (Jeff Hanisch / USA Today) 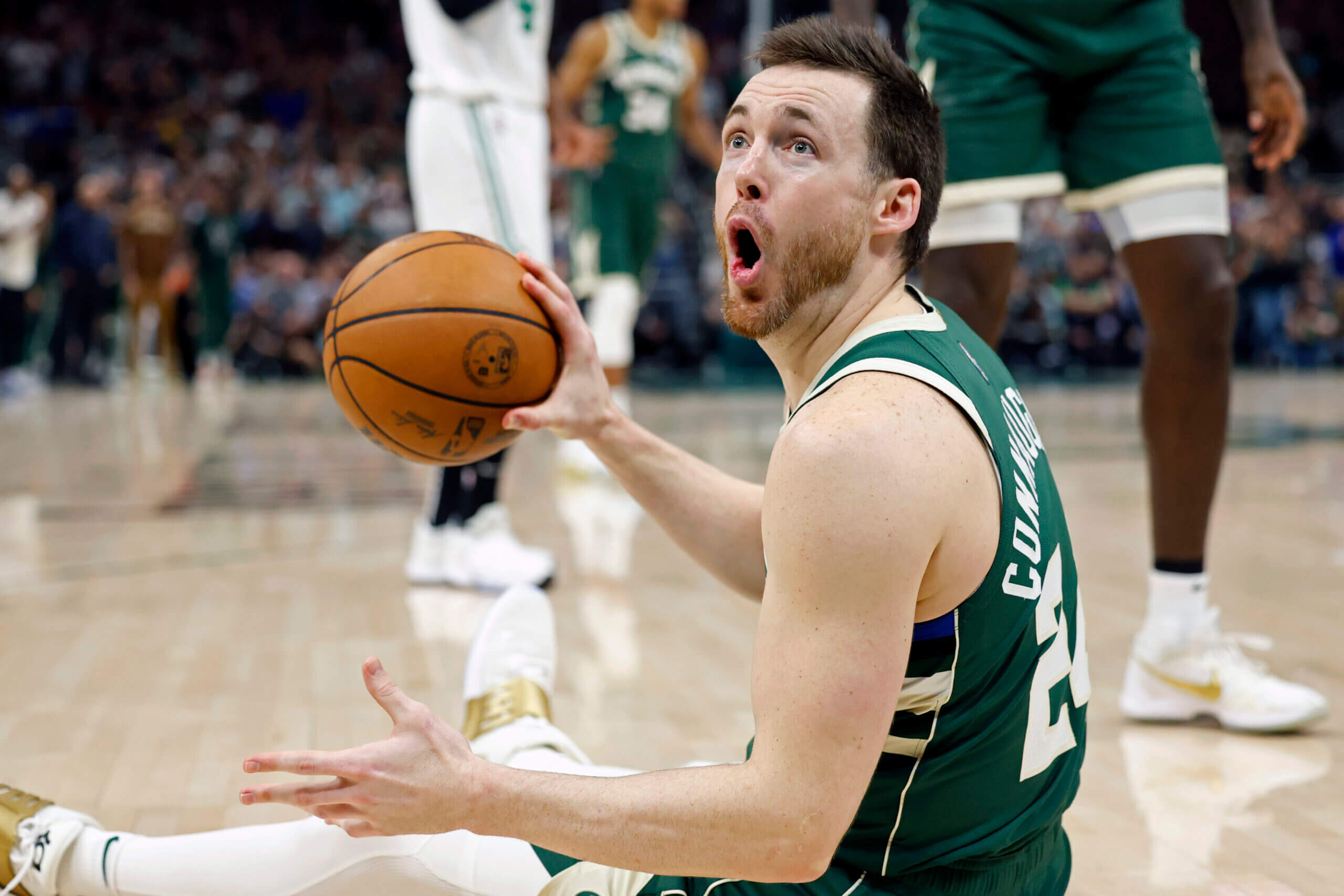 Pat Connaughton and the Bucks won’t be repeating as NBA champs after being eliminated by the Celtics in a hard-fought seven-game Eastern Conference semifinal series. (Jeff Hanisch / USA Today) 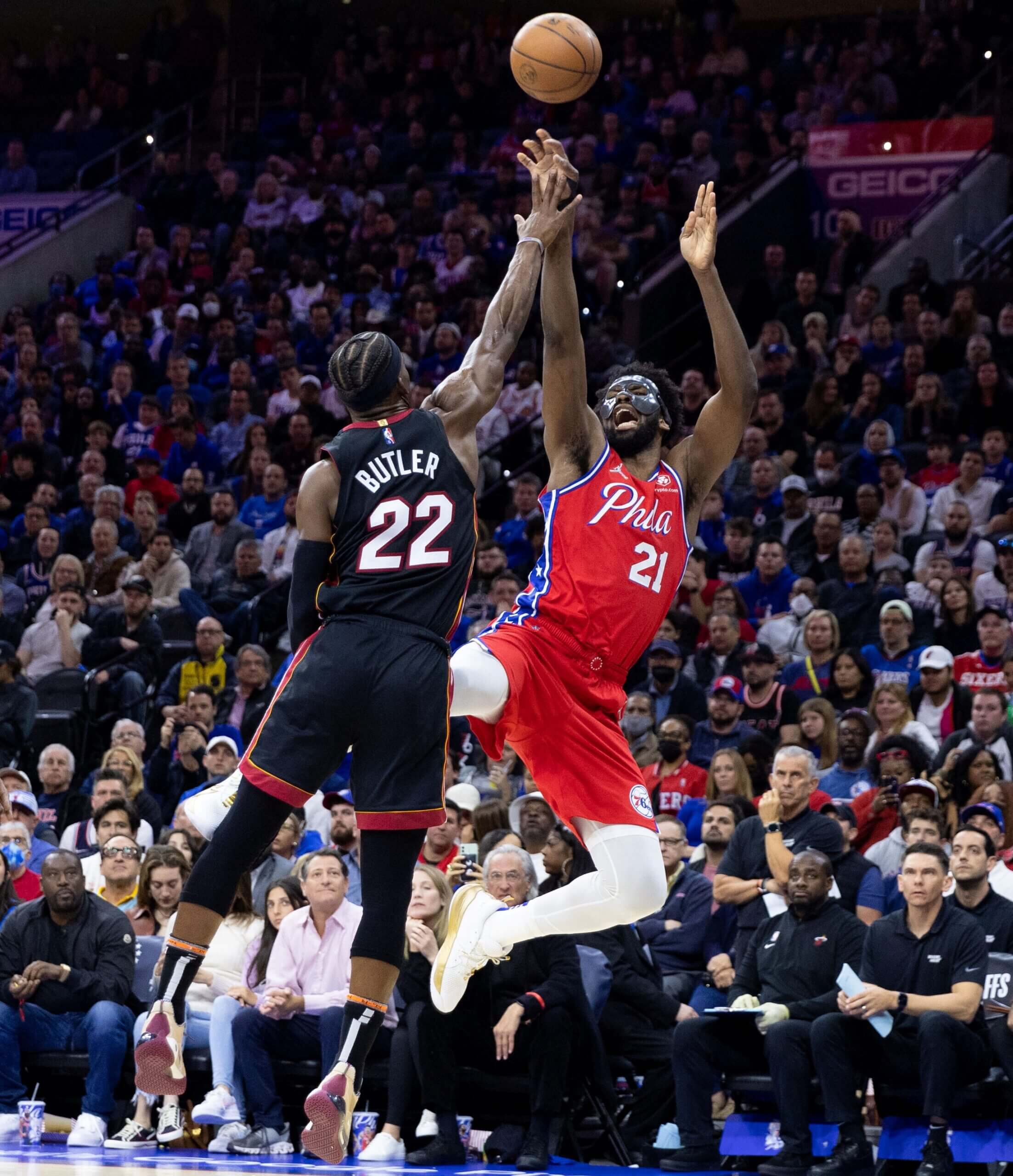 In the opposite Eastern Conference semifinal series, Jimmy Butler of the Heat challenges a jumper by Joel Embiid of the Sixers during Game 4 in Philadelphia. (Bill Streicher / USA Today) 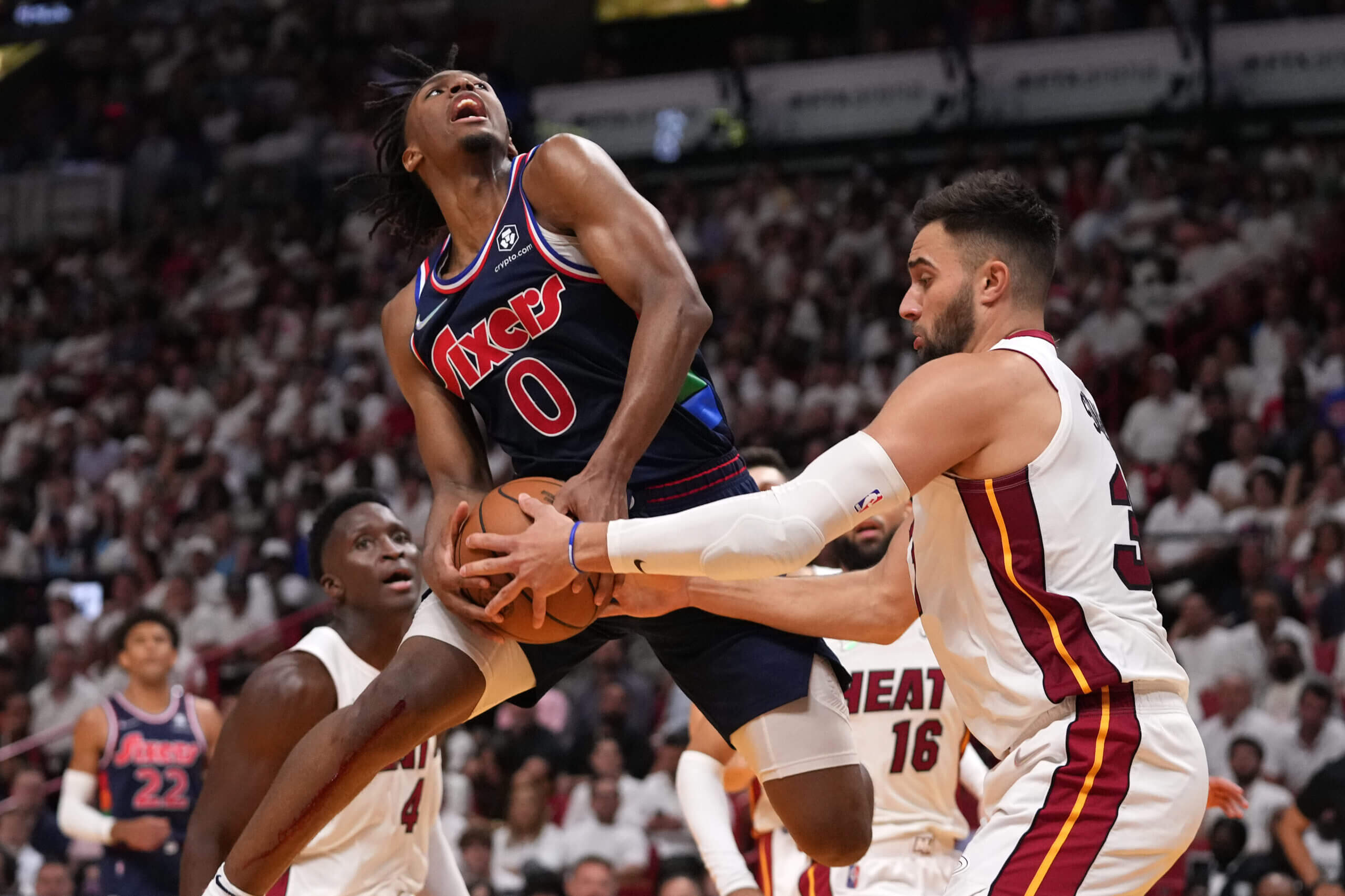 Max Strus of the Heat ties up Tyrese Maxey of the 76ers on this drive during Game 2 in Miami. The Heat won this game and the series, 4-2. (Jasen Vinlove / USA Today) 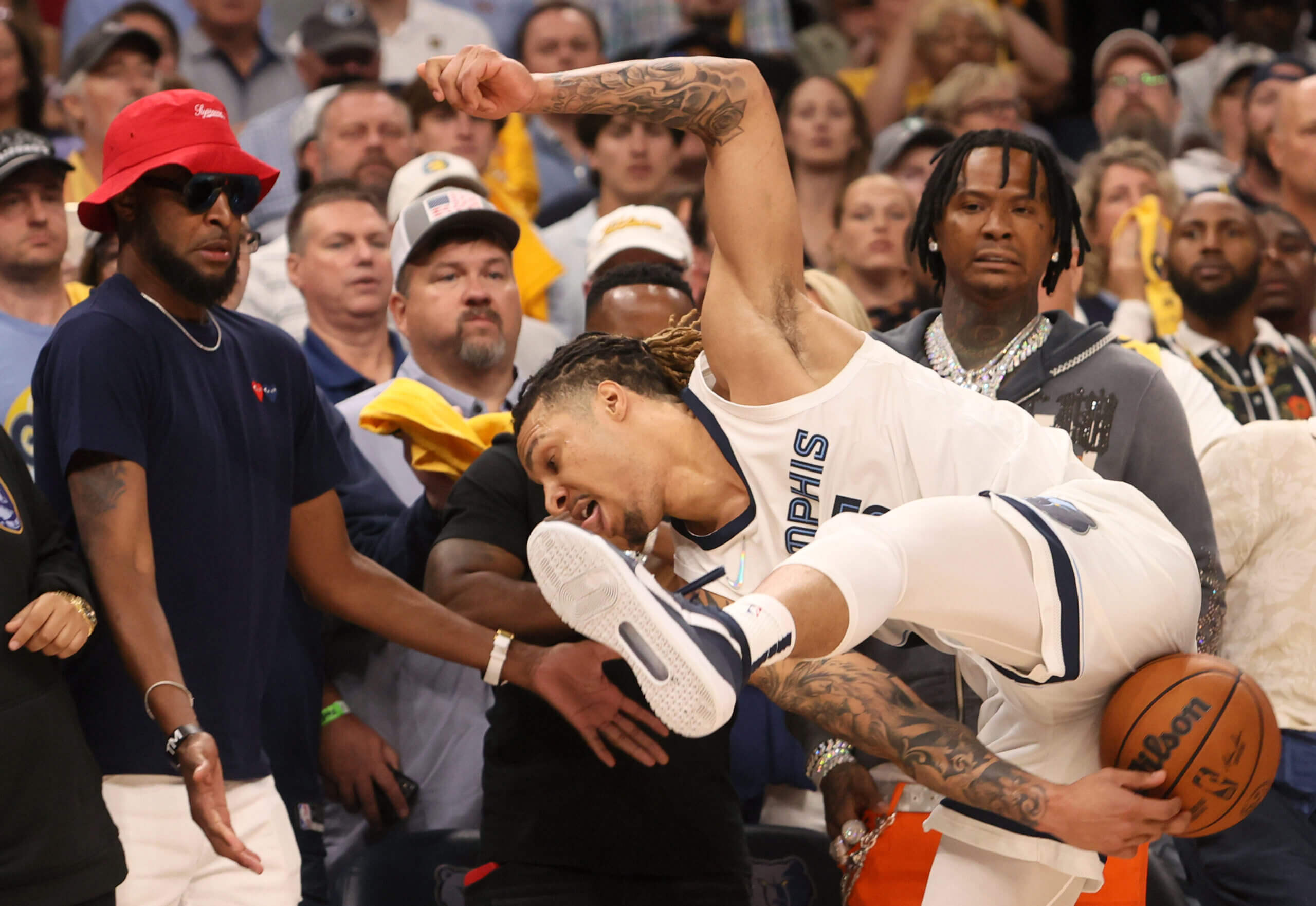 Brandon Clarke of the Grizzlies attempts to avoid wasting the ball as Tee Morant (Ja’s father) prepares to catch Clarke during Game 1 of the Western Conference semifinals against the Warriors in Memphis, Tenn. (Joe Rondone / USA Today) 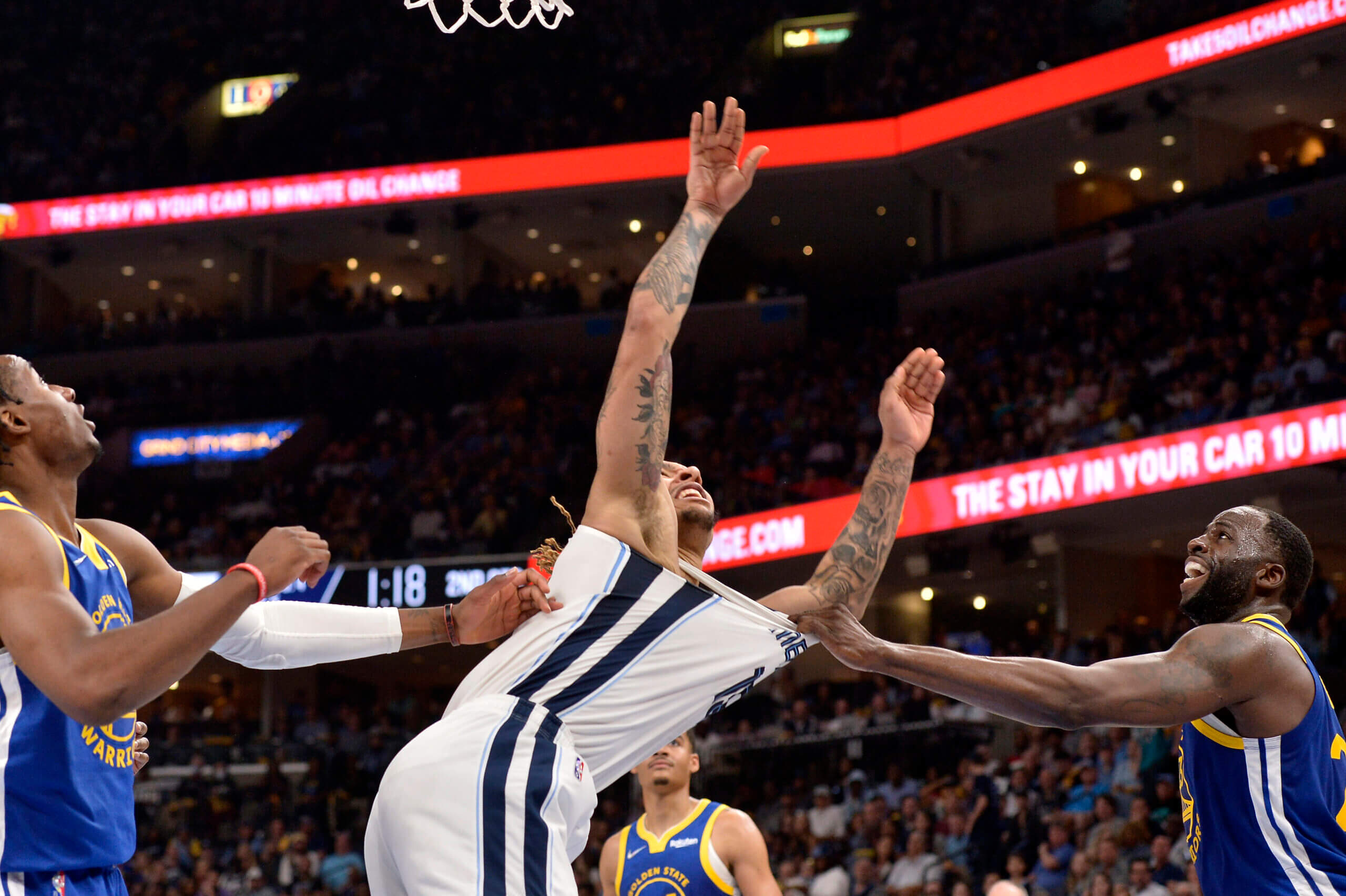 After which got here the roughhousing as Draymond Green of the Warriors yanks Brandon Clarke’s jersey in Game 1. The referees reviewed the play and deemed it a flagrant 2 foul after Green made contact with Clarke’s face before the tug. Consequently, Green was ejected however the Warriors won 117-116. (Brandon Dill / Associated Press) 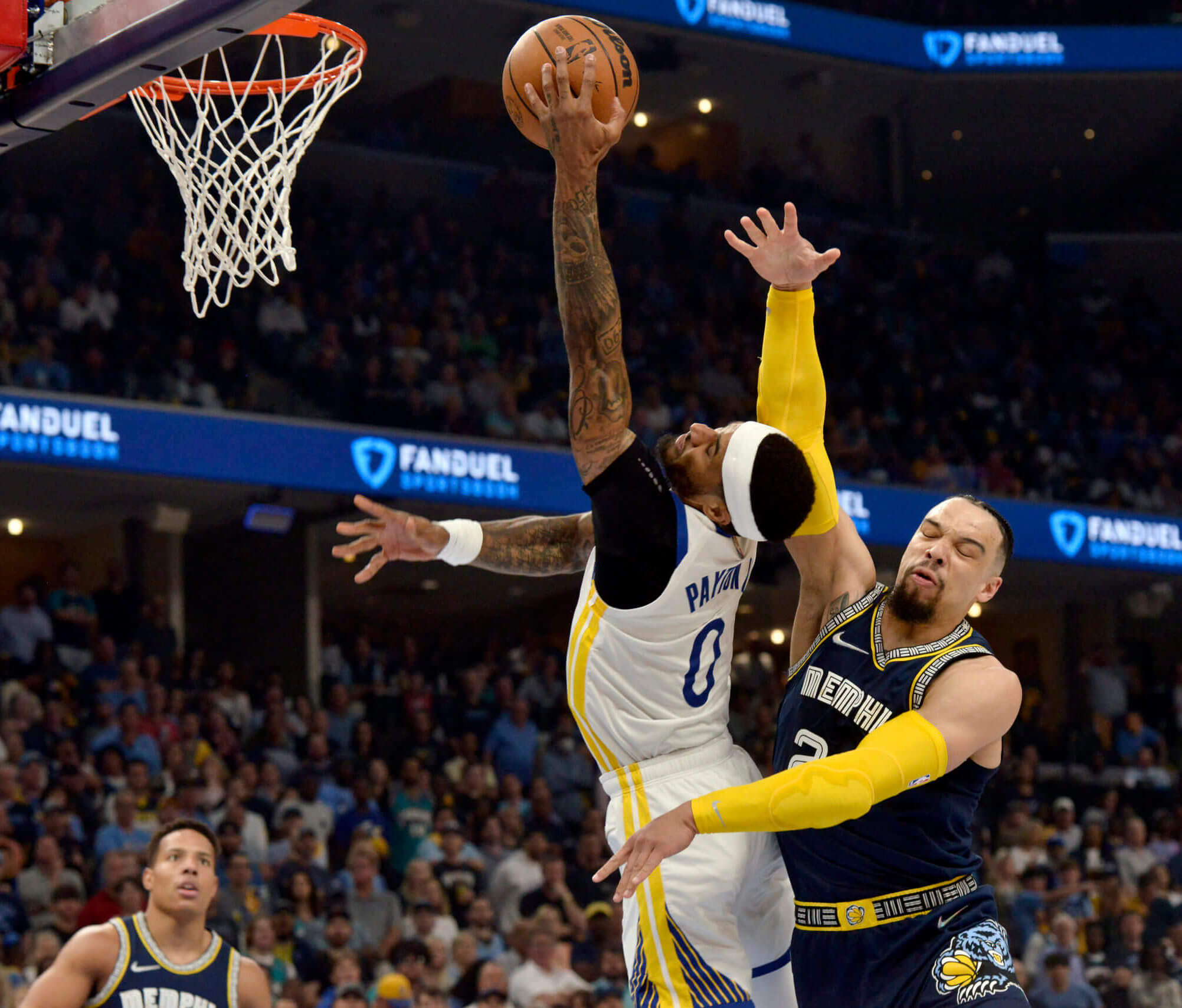 Roughhousing Part II in Game 2: Dillon Brooks of the Grizzlies smacks Gary Payton II of the Warriors as Payton drives to the basket. Brooks is ejected because of this and suspended one game by the NBA for the flagrant 2 foul. On the play, Payton fractures his left elbow and misses the rest of the series, which the Warriors win 4-2. (Brandon Dill / Associated Press) 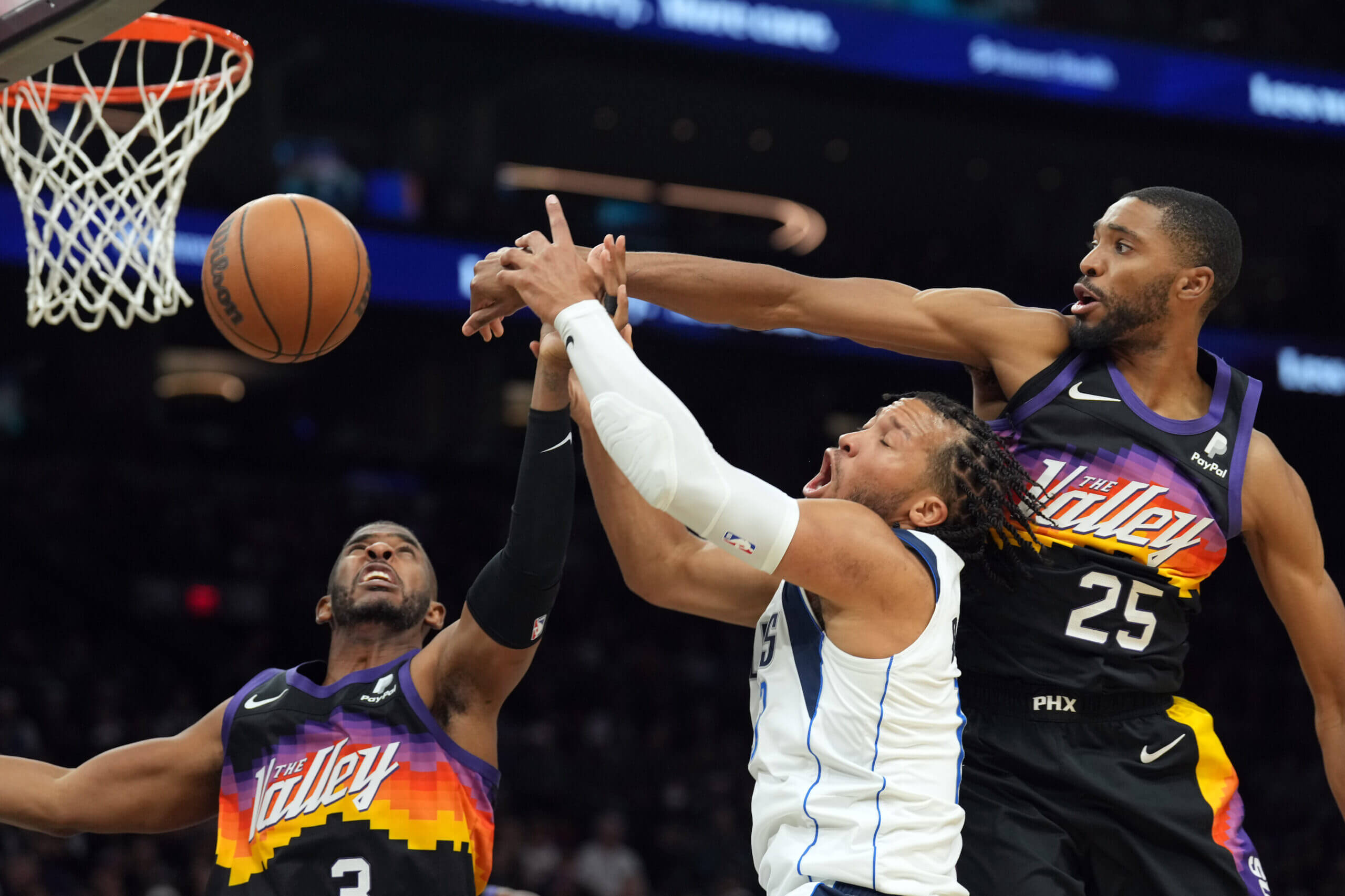 Chris Paul (left) and Mikal Bridges of the Suns and Jalen Brunson of the Mavericks all get their hands on a loose ball, but none of them snag it during Game 1 of the Western Conference semifinals in Phoenix. (Joe Camporeale / USA Today) 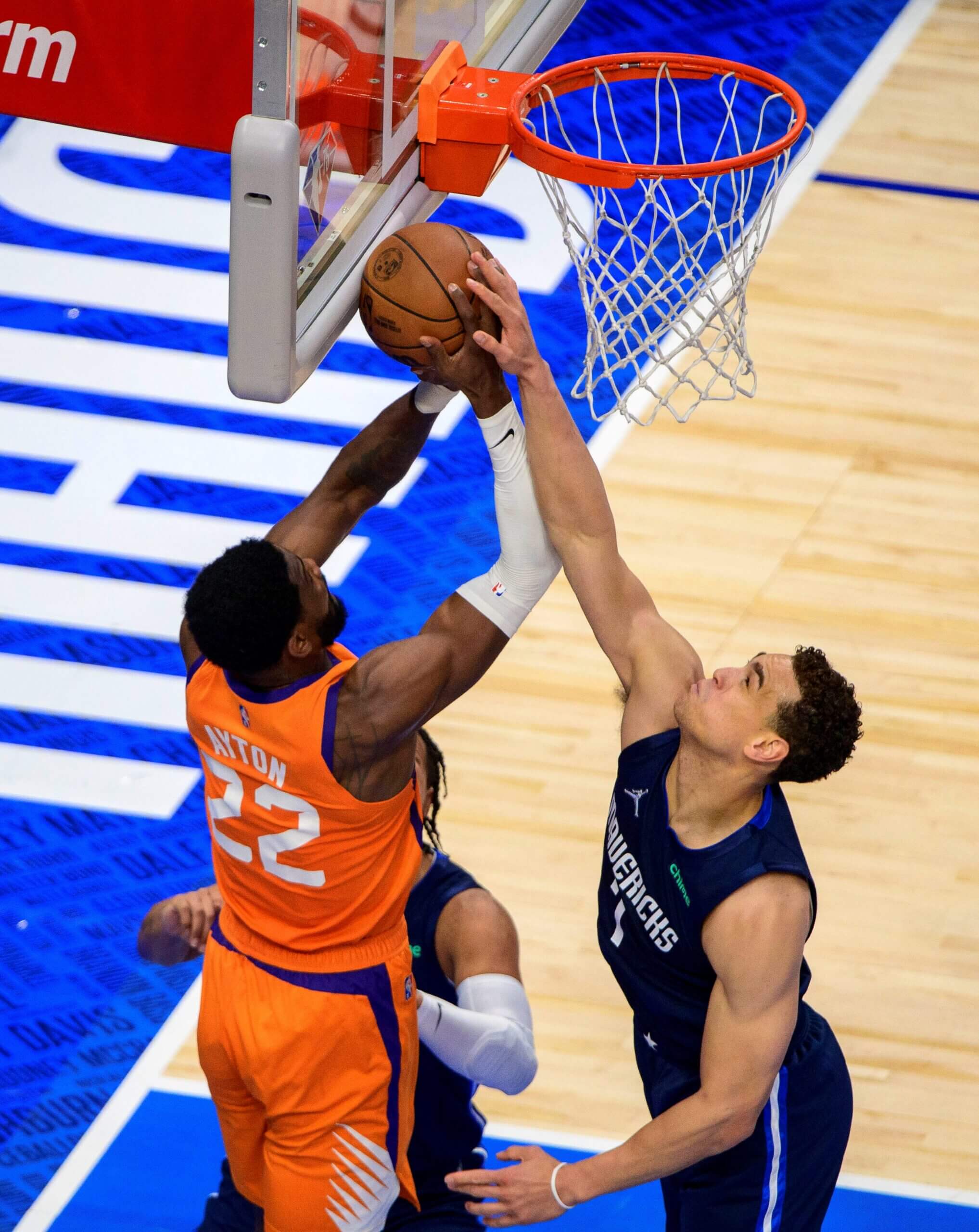 Roadblock: Dwight Powell of the Mavericks stuffs Deandre Ayton of the Suns during Game 4 in Dallas. (Jerome Miron / USA Today) 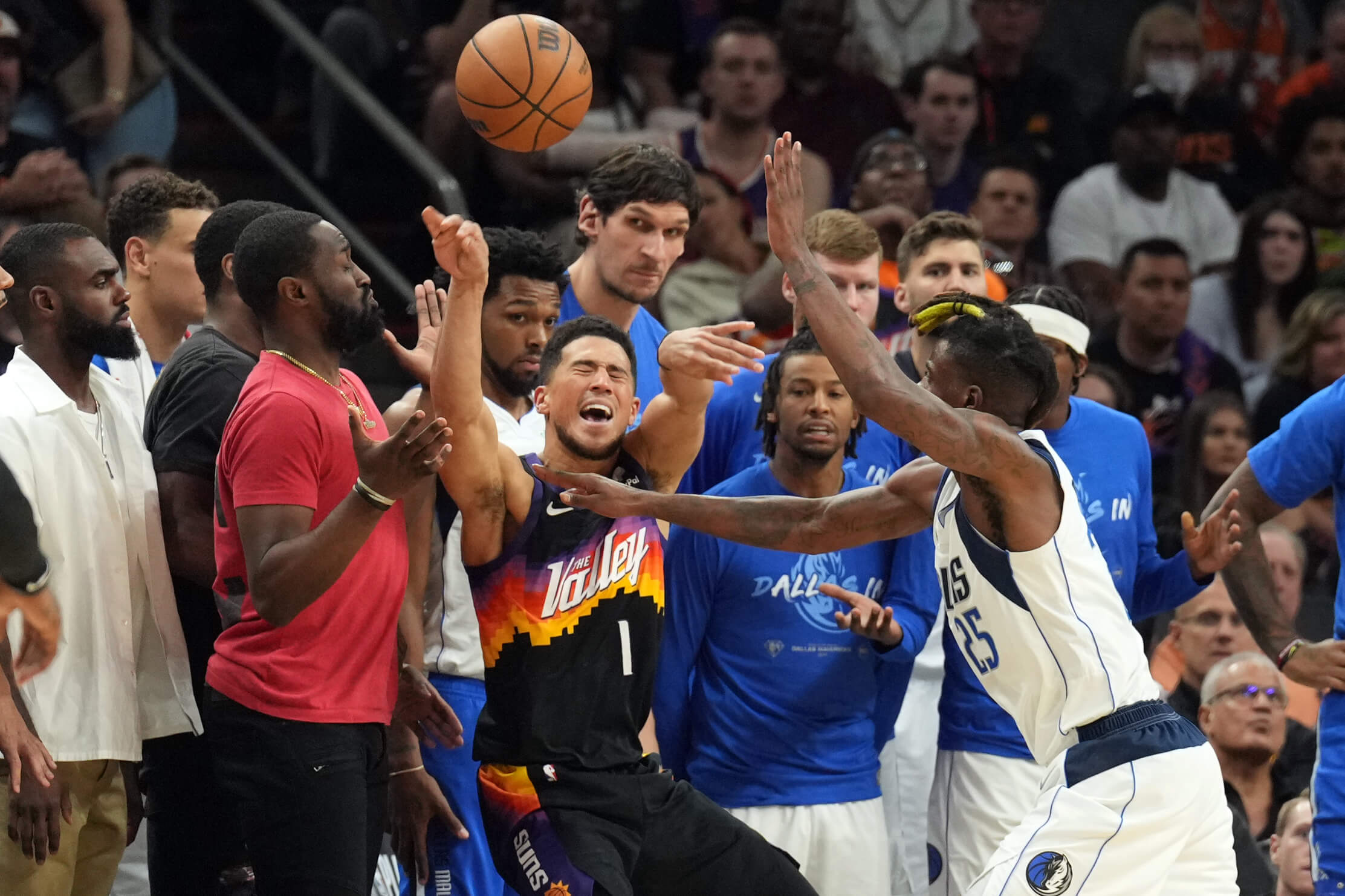 With tenacious defense, Reggie Bullock and the Mavericks prevail over Devin Booker and the Suns in seven games, including a 123-90 whipping in the ultimate one. (Joe Camporeale / USA Today) 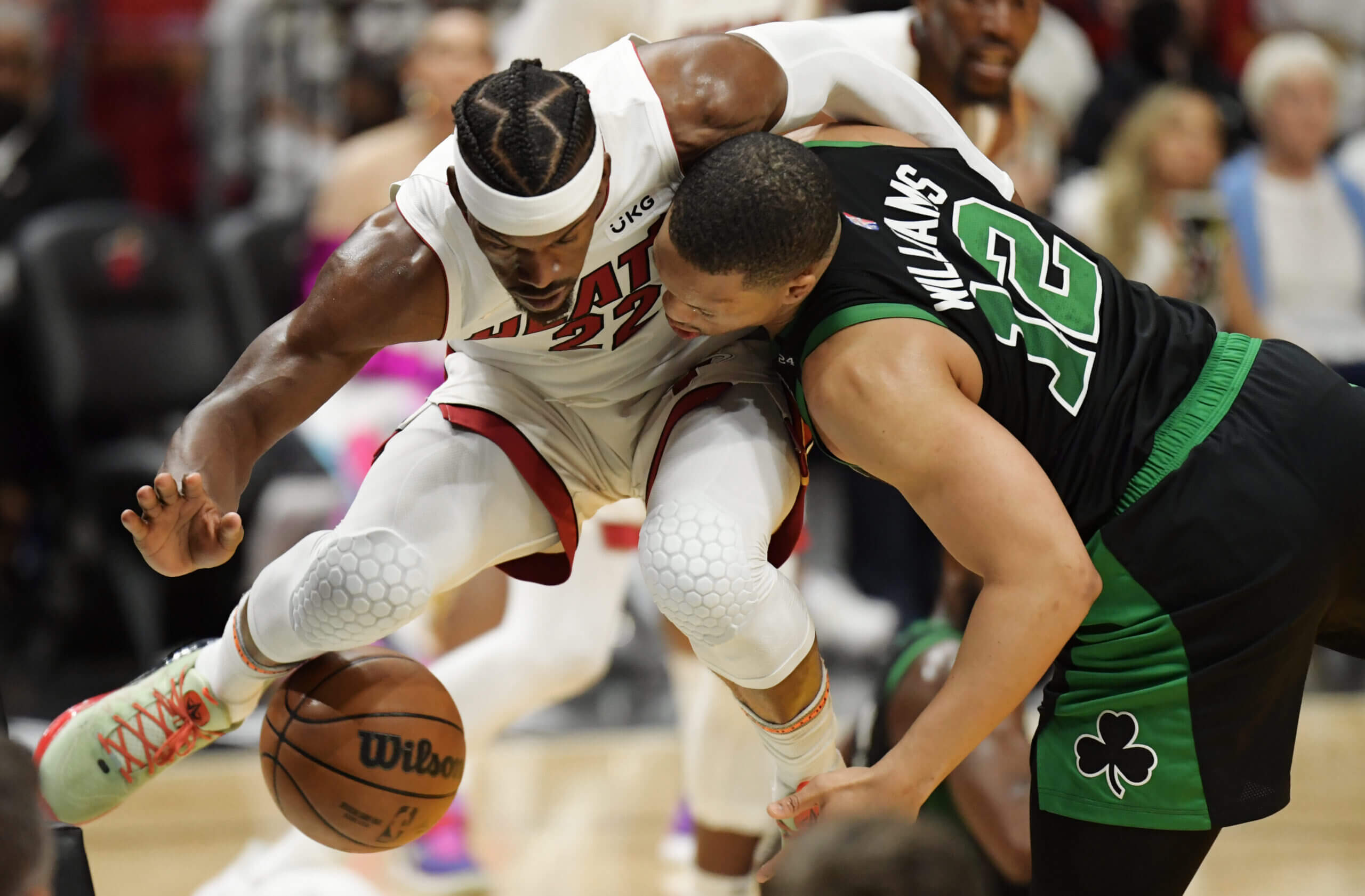 Jimmy Butler of the Heat and Grant Williams of the Celtics slam into one another while pursuing a loose ball during Game 5 of the Eastern Conference finals in Miami. (Jim Rassol / USA Today) 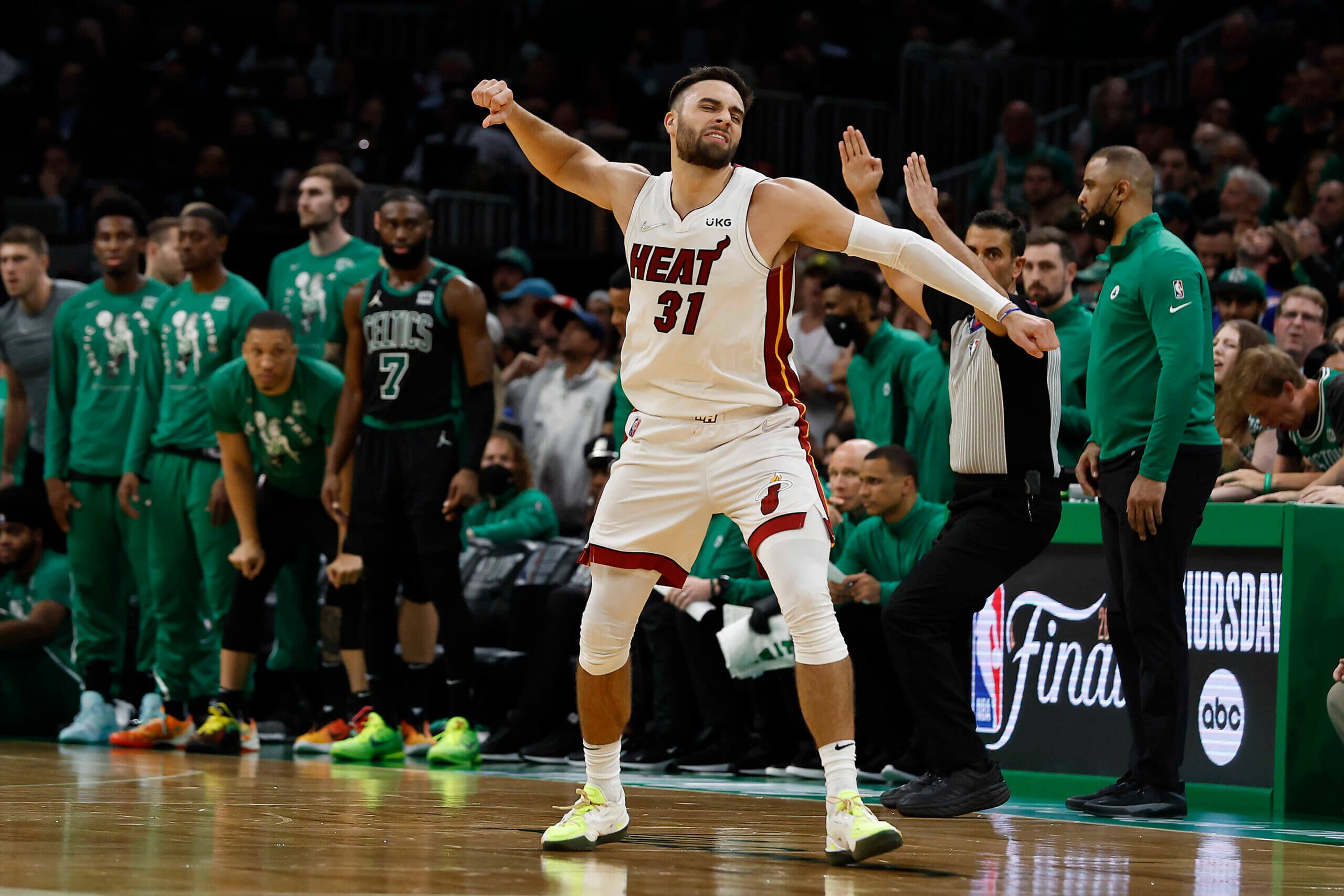 Max Strus, who missed 14 consecutive 3-pointers at one point on this series, celebrates certainly one of the three big 3 ones he made in Game 6 to assist the Heat force a Game 7 against the Celtics. (Winslow Townson / USA Today) 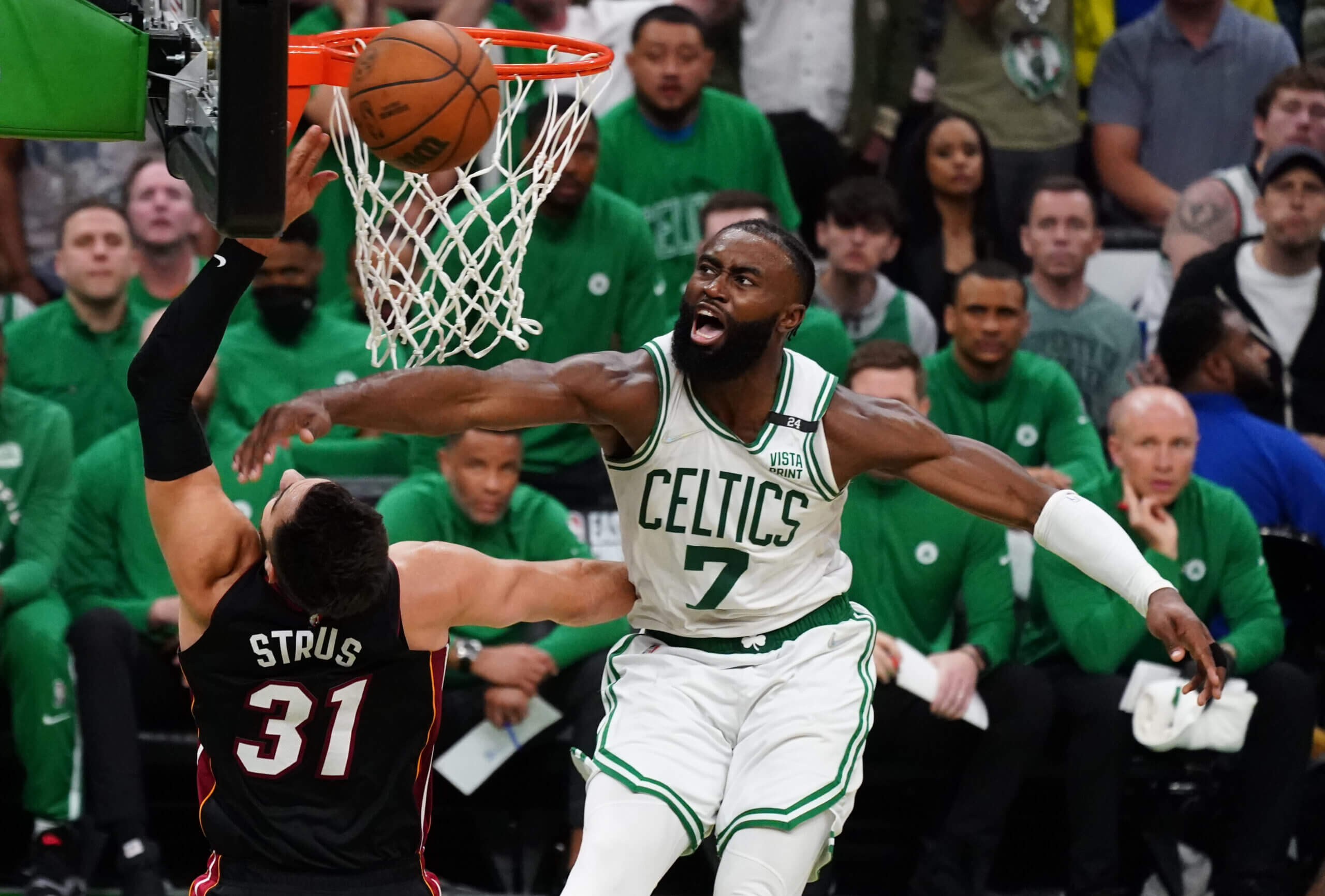 With great defense like this, Jaylen Brown and the Celtics are advancing to the NBA Finals, which begin Thursday in San Francisco. (David Butler II / USA Today) 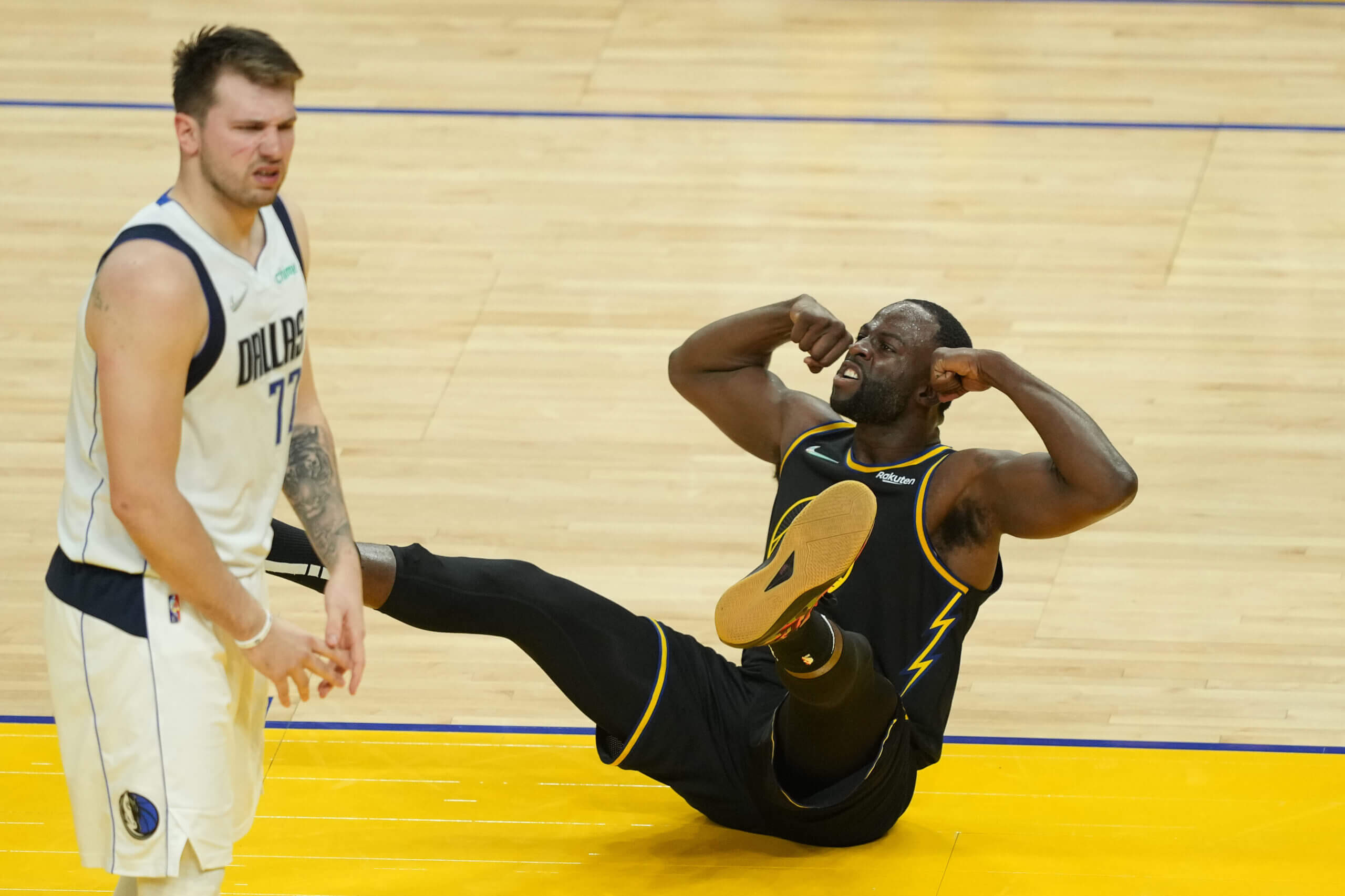 Draymond Green of the Warriors flexes his pipes after scoring while being fouled in Game 1 against Luka Dončić and the Mavericks within the Western Conference finals in San Francisco. (Darren Yamashita / USA Today) 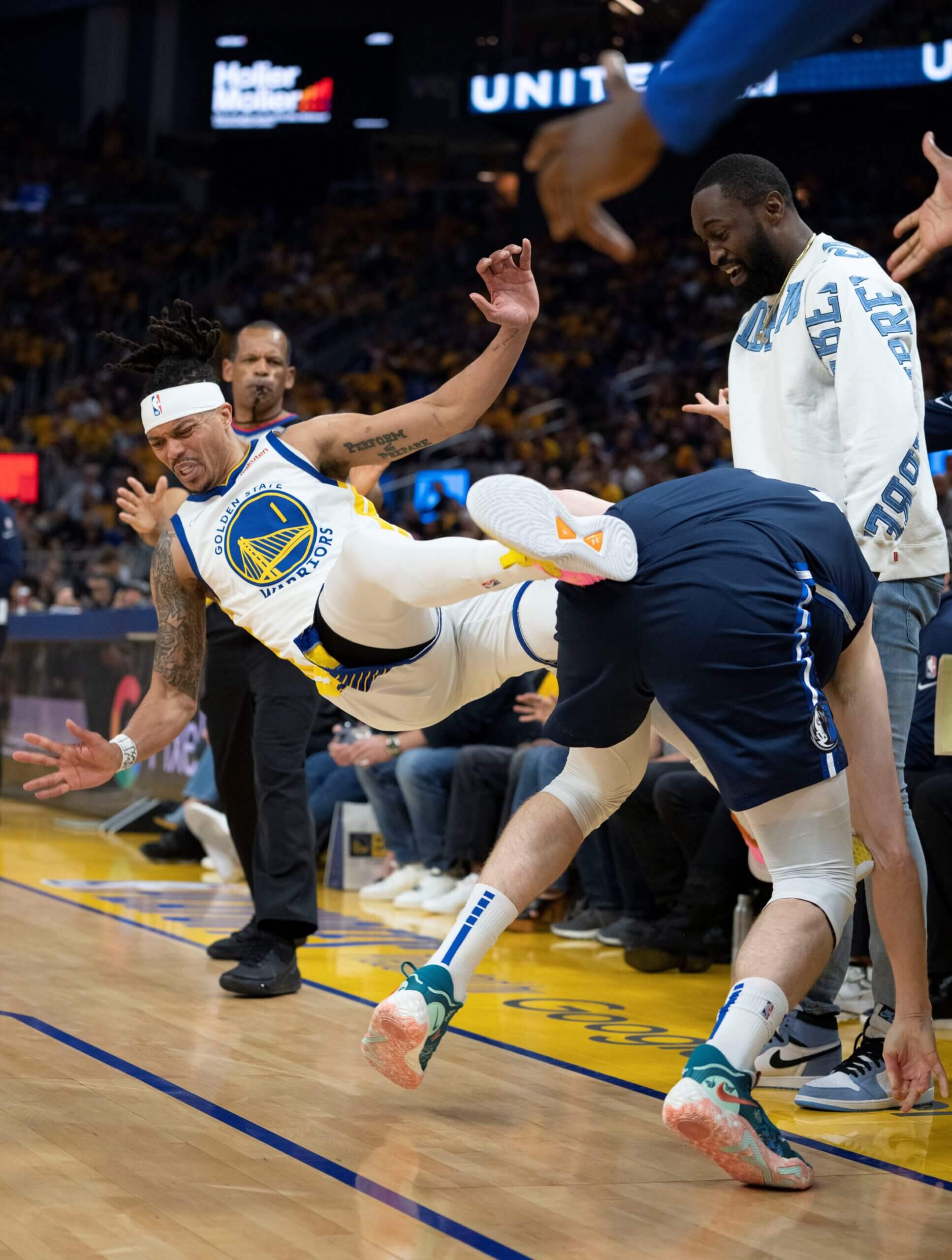 Fans sitting courtside watch with amusement as Damion Lee of the Warriors and Davis Bertans of the Mavericks get tangled during Game 2 in San Francisco. (Kyle Terada / USA Today) 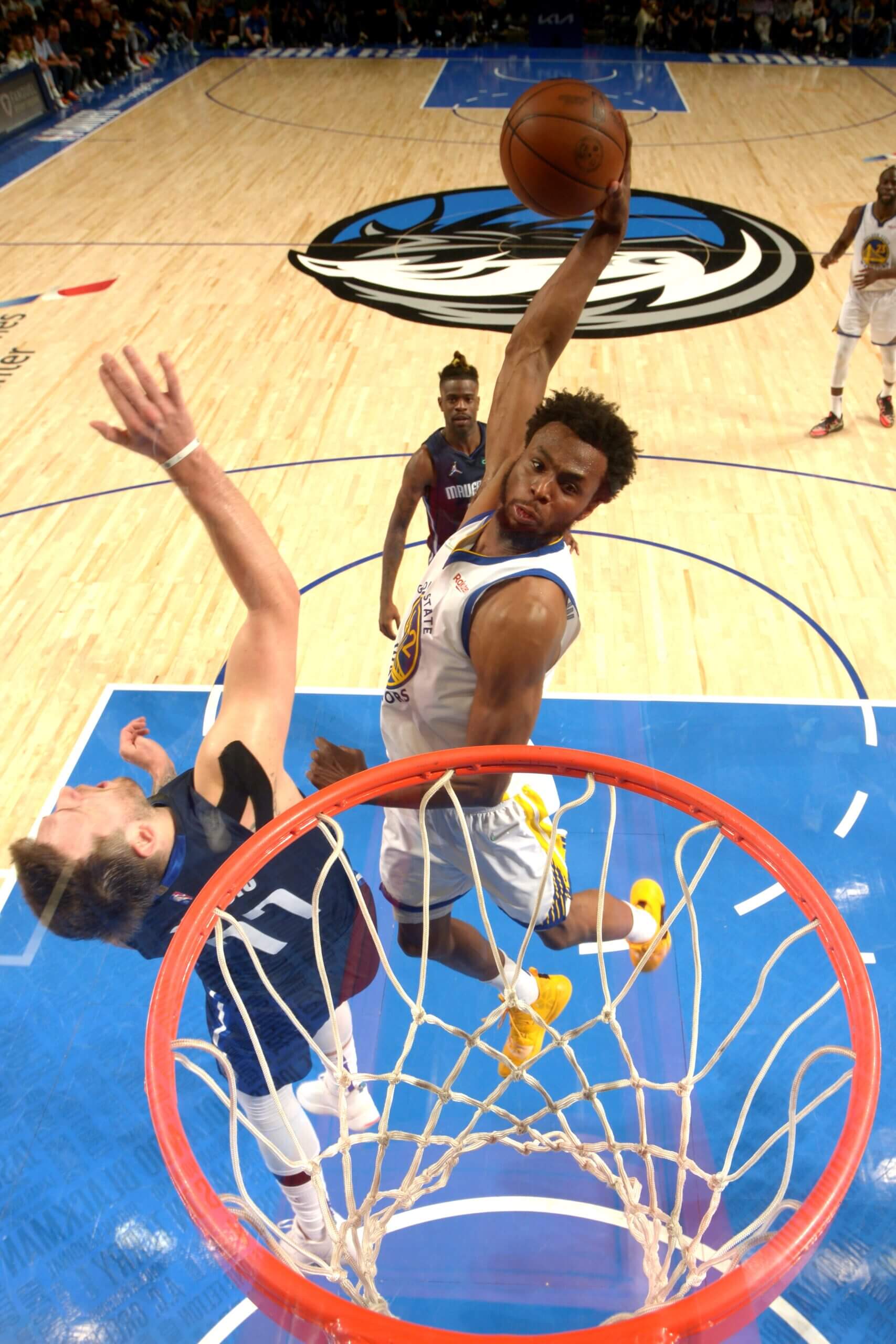 In one of the crucial spectacular dunks during this postseason, Andrew Wiggins of the Warriors posterizes Luka Dončić in Game 3 in Dallas. (Glenn James / NBAE via Getty Images). 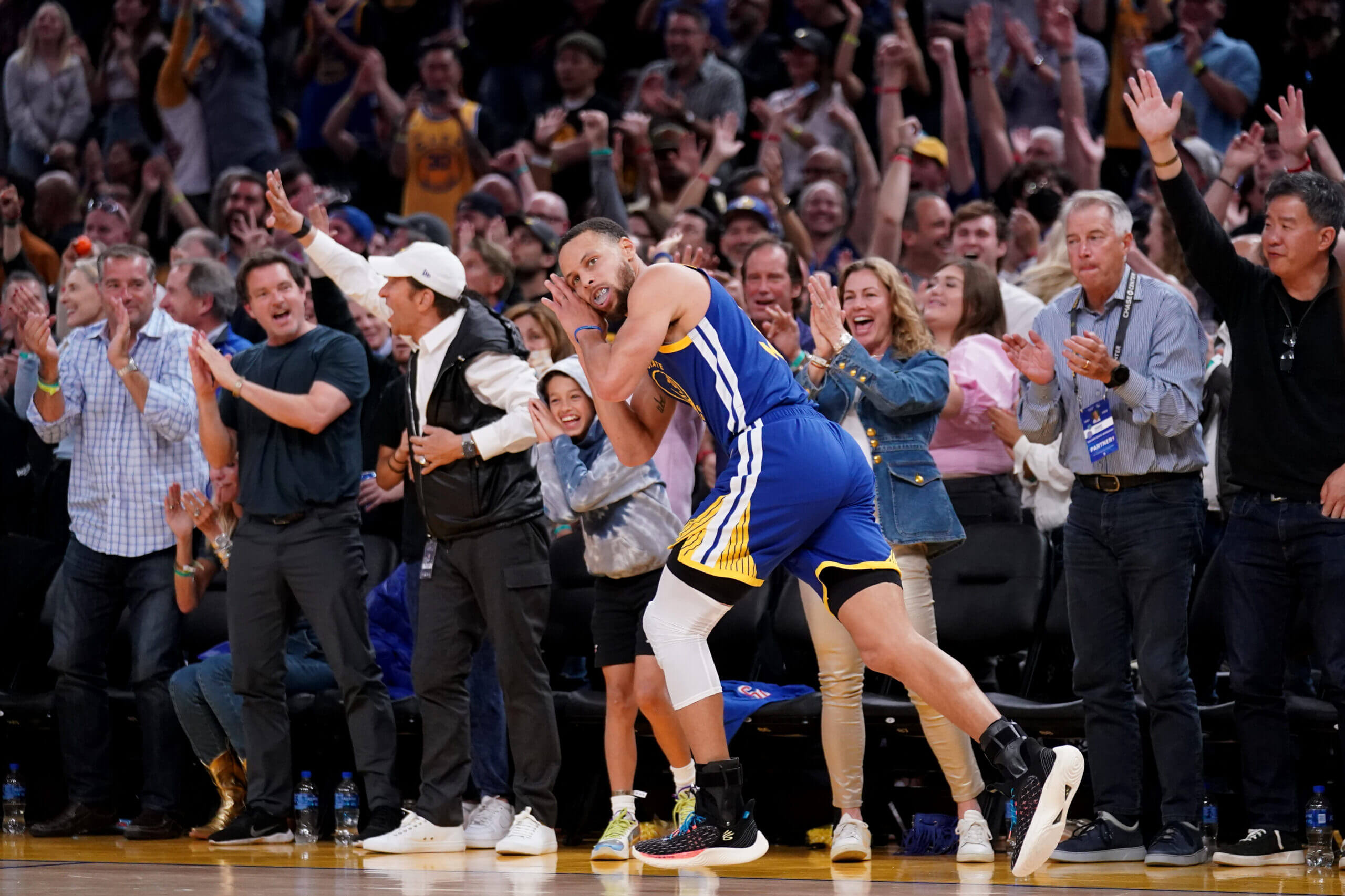 Steph Curry and the Warriors are getting loads of sleep and rest after ending off the Mavericks on May 26 in five games of the Western Conference finals. (Cary Edmondson / USA Today) 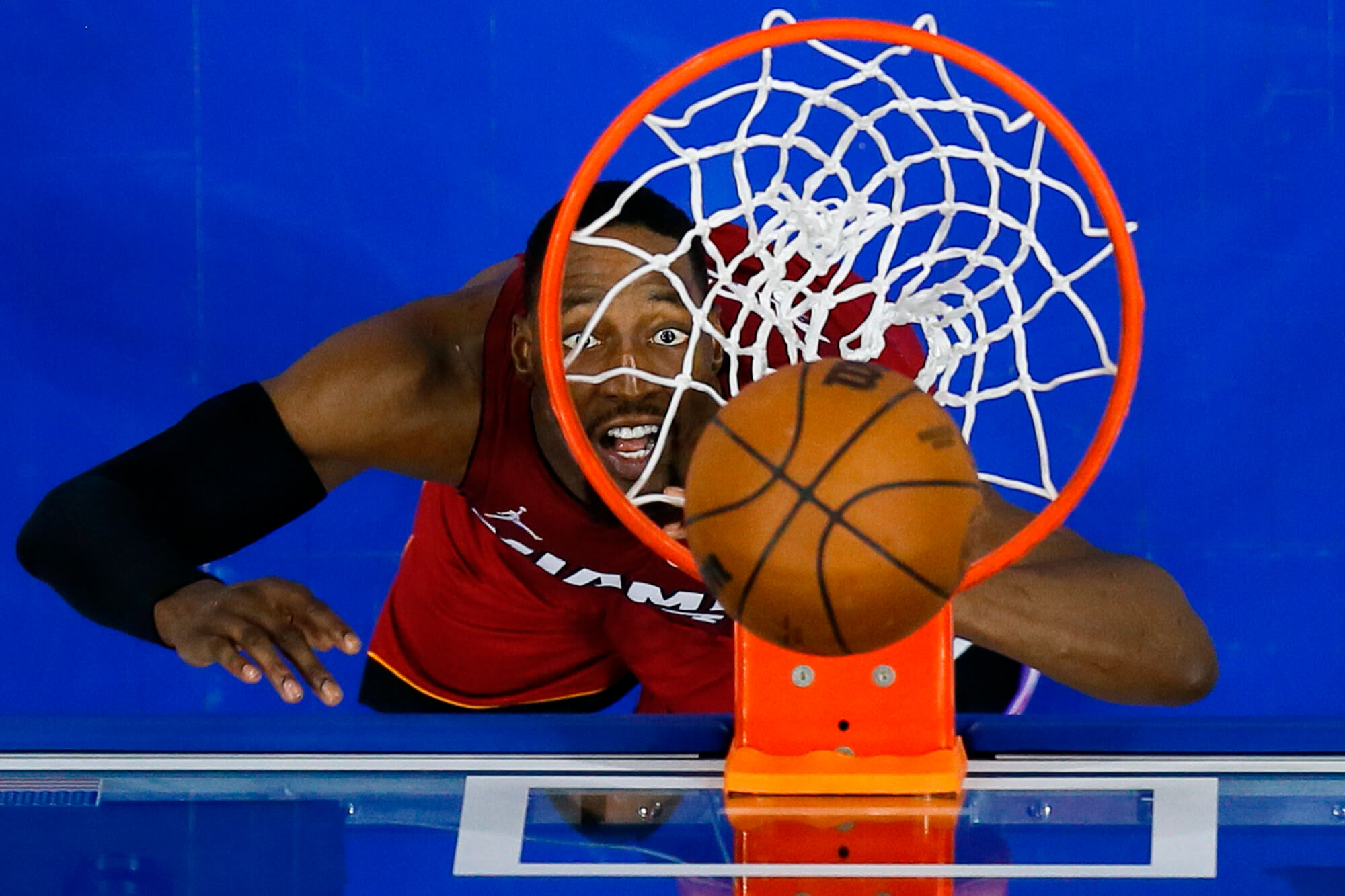 Bam Adebayo of the Heat has a terrific view of this shot attempt during Game 6 of the Eastern Conference semifinals against the Sixers in Philadelphia. (Matt Slocum / Associated Press)

November: 20 NBA images you would possibly have missed

December: 20 NBA images you would possibly have missed

January: 20 NBA images you would possibly have missed

February: 20 NBA images you would possibly have missed

March: 20 NBA images you would possibly have missed

April: 20 images you would possibly have missed