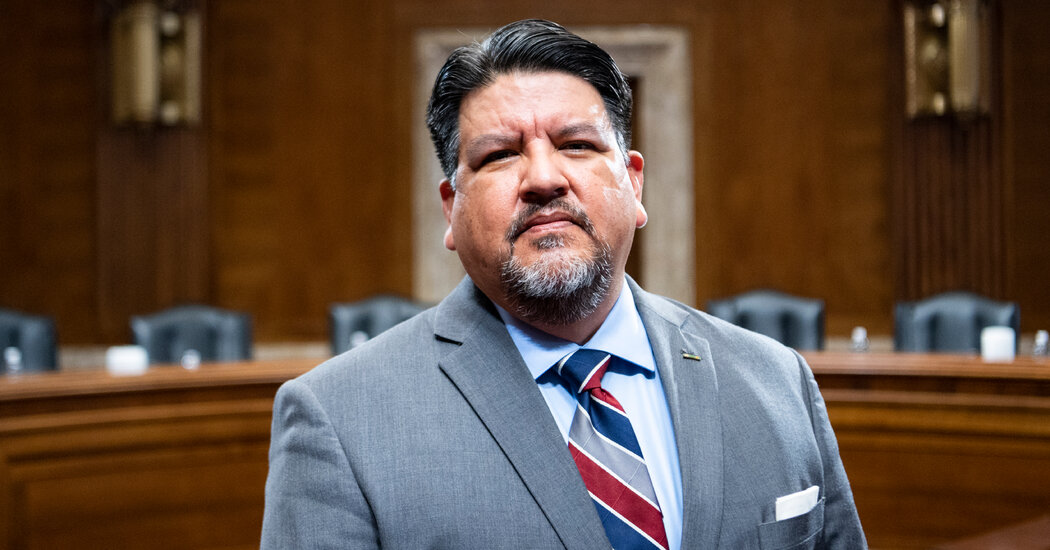 Last December, Charles F. Sams III made history when he became the primary Native American to be appointed director of the National Park Service. He had his work cut out for him.

The number of tourists to the largest parks in the USA is at an all-time high, road repairs and other infrastructure upgrades are badly needed and climate change poses an increasing threat through coastal erosion, landslides, floods and other effects. To handle these issues, Congress in 2020 passed a $9.5 billion package referred to as the Great American Outdoors Act, which Mr. Sams will help implement.

It’s a giant job, yet Mr. Sams has spent a profession navigating the complexities of tribal land management. Most recently, he served as the manager director of the Confederated Tribes of Umatilla Indian Reservation in northeast Oregon, where he now lives. Mr. Sams, who’s Cayuse and Walla Walla, credited his grandfather with instilling in him a responsibility to native plants and wildlife.

“He would ask me questions now and again, to color an image of our relationship, as humans, with the natural world,” he said. “That was a vital a part of my education growing up.”

This conversation has been edited for clarity and length.

What was it prefer to be sworn in on the steps of the Lincoln Memorial?

Interior Secretary Deb Haaland and I went to the second landing of the marble steps, and he or she had me look down at my feet, so I could recognize that I used to be standing where Dr. King gave his “I Have a Dream” speech. Ms. Haaland, who’s Native American, said, “we’re embodying Dr. King’s dream.” I used to be greatly honored.

Secretary Haaland has spoken about the importance of accessibility. What have been the challenges to creating our parks accessible to all Americans?

One issue stems from affordability. In Florida, we’ve partnered with the cities of Homestead and Miami and are running buses out to Biscayne and Everglades to ensure that low-income families to get out into the parks system.

Many parks were inbuilt the Nineteen Twenties, 30s and 40s, and didn’t have A.D.A. accessibility. We’re very happy to make use of a portion of the Great American Outdoors Act money to supply upgrades so folks who could have disabilities can experience the parks differently. For instance, in Washington, there at the moment are smaller versions of statues on the Franklin Delano Roosevelt Memorial visitors center, so folks who’ve sight issues can have that tactile experience.

You previously served as executive director of the Confederated Tribes of the Umatilla Indian Reservation. How did that have prepare you for this role?

The reservation was established by a treaty in 1855, and my great-great-great grandfather Peo Peo Mox Mox, the top man of the Walla Walla people, was a signer of that treaty. He and my ancestors originally thought that they had reserved 500,000 acres, but it surely ended up being 250,000 acres. On account of the Allotment Act in 1887, it became a ‘checkerboard reservation,’ so we have now a mix of Indian and non-Indian residents in an area through which our tribe has legal jurisdiction.

Leading a tribe, and having the ability to work with each tribal members and nontribal members, together with the infrastructure and economic development on a reservation, gave me a reasonably good grounding on easy methods to manage budgets and resources.

Some parks, like Arches, Rocky Mountain and Yosemite, have recently introduced timed-entry systems to administer with overcrowding. How do you make sure the protection of those fragile landscapes while keeping them open to the general public?

As more Americans are getting outdoors and recreating, we would like to encourage that. We just should be higher staffed and manage this in the easiest way possible.

Our staff numbers are down by nearly 15 percent to where we were a decade ago, despite the fact that visitation has increased over 20 percent. For fiscal yr 2022, Congress has authorized the funding of 1,000 latest positions. That may help us have the boots on the bottom to administer this very complex issue.

Are there parks or regions where you’d prefer to see more visitation?

While we have now some very beautiful large parks — the most important 63 parks are magnificent, and I wouldn’t ever say that any individual shouldn’t go see them — I believe some folks are missing out on a number of the smaller parks.

I recently took my family to Prince William Forest Park, which is an hour outside of Washington, D.C. The O.S.S., which was a precursor to the C.I.A., had used it as a training facility, they usually have these little cabins built during World War II. It was also a part of George Washington’s march when he was going after the British at Yorktown. I wanted to reveal my 8-year-old daughter to that history.

On the Whitman Mission in Washington State, signs were recently updated to reflect a more nuanced version of historical events. Is there a spotlight now to incorporate more Indigenous history within the parks?

We received very clear direction from President Biden and Secretary Haaland to actually lean in and tell America’s untold stories, even those that could be difficult. So yes, we’re going on the market and dealing with a bunch of students and community members who know the wealthy history of their very own lands, to assist us tell a mosaic of stories.

As more tribal nations are invited to comanage federal land — like in Canyon de Chelly National Monument and Glacier Bay National Park — how will this impact the day-to-day experience for visitors?

Basically, it’s not going to affect day-to-day visitors. But as we work closer with tribes, whether through co-stewardship or comanagement, we’re going to see a richer capability of preservation efforts for native species like buffalo and wolves. Native people have lived on this landscape for no less than 10,000 years, if not longer. Through the years we’ve ignored those folks who’ve lived here the longest, who could have the advantage of observational knowledge to assist protect these parks that we love a lot.