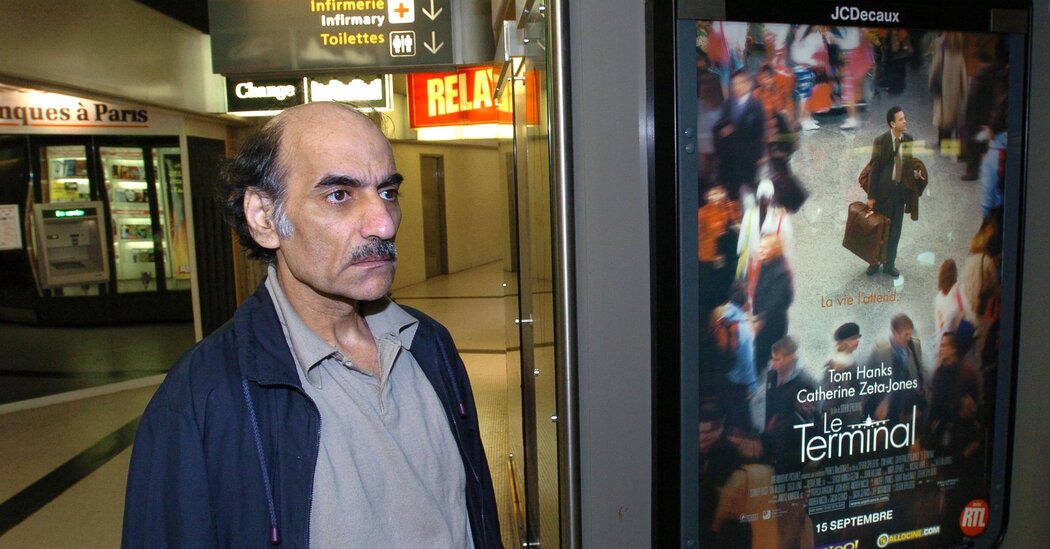 Mehran Karimi Nasseri, an Iranian refugee who lived for 18 years in Charles de Gaulle Airport in Paris and whose intriguing tale inspired the 2004 Steven Spielberg film “The Terminal,” died on Saturday in that very same airport.

The explanation for death, in Terminal 2F at about noon, was a heart attack, a representative for the airport said in an announcement. His exact age was not immediately known, but he was in his late 70s.

Mr. Nasseri’s attachment to the airport lasted until his final days. He had been staying at a nursing home this 12 months, but returned to the airport in mid-September “to live as a homeless person in the general public space of the airport,” the representative said.

Together with his trimmed mustache and soft voice, Mr. Nasseri became a peculiar fixture in Terminal 1 of the airport as he hauled piles of his belongings, stacked neatly on a luggage cart. He resided within the airport from 1988 to 2006, initially due to legal hurdles to prove his refugee status, and later by selection.

He lived between a pizzeria and an electronics store, planting himself on a red plastic bench that he made his home. On a coffee table, he had a hand mirror; an electrical shaver, which he used every morning; and a group of press clippings that told of his status as an odd figure in France.

His days were punctuated by the rhythm of flights and the presence of travelers, whose numbers swelled within the morning and dwindled at night, leaving him mostly alone to sleep on his preferred curved bench. Airport employees would normally give him their meal coupons, and flight attendants would give him toiletries left over by first-class passengers.

The Recent York Times Magazine noted in a 2003 profile of Mr. Nasseri that he seemed “each settled — and able to go.”

“I realize I’m famous,” Mr. Nasseri said in that article. “I wasn’t interesting until I got here here.”

His story became a bizarre tale in immigration history, and a few details about his background proved difficult to pin down due to his changing claims about his origins. (In the identical article, he denied that he was Iranian and deflected questions on his childhood in Tehran.)

Airport officials said they’d confirmed that Mr. Nasseri was born in Iran, within the town of Masjid-i-Sulaiman, in 1945.

Early on, he said he was expelled from his homeland for antigovernment activity in 1977 because, as a student in England, he had protested against the federal government of Shah Mohammed Reza Pahlavi. When he returned to Iran, he found himself imprisoned and shortly exiled, he said.

He bounced around Europe for a couple of years with temporary refugee papers before arriving in Belgium, where he was given official refugee status in 1981. Mr. Nasseri traveled to Britain and France easily until 1988, when he arrived at Charles de Gaulle Airport with a one-way ticket to London, a couple of clothes, about $500 and no passport.

He told the airport authorities that his papers had been stolen at a Paris train station. Waiving the standard rules, the authorities let him fly to Heathrow Airport in London. But there, British immigration officials refused to let him enter the country, and he was returned to Charles de Gaulle.

Mr. Nasseri couldn’t prove who he was or offer proof of his refugee status, so he moved right into a holding area within the airport for travelers without papers.

He was there for days, after which weeks and months. Because the months became years, Mr. Nasseri became trapped in a legal twilight zone. Within the Nineties, the French authorities insisted that he was on French soil illegally, but they might not deport him because no country would accept him.

In 1999, he got permission to depart the airport and go wherever he wished in Europe. But he didn’t need to go anywhere, the airport’s medical director told The Times that 12 months, because he was “scared to depart this bubble world” that he had been living in.

“Finally getting the papers has been an enormous shock to him, as if he was just thrown from his horse,” said Dr. Philippe Bargain, the airport’s medical director. “If you wait 11 years for something and suddenly in a couple of minutes you sign some papers and it’s done — imagine what a shock that’s.”

He had made a house at Charles de Gaulle: Airport employees would call him Alfred or Sir, Alfred — a nickname rooted in a mistake that appeared in a letter from British immigration officials. He would wash up within the passenger bathrooms and take his clothes to the cleaner on the airport.

As his story spread throughout French news media after which to outlets internationally, reporters noticed the passion with which Mr. Nasseri would speak in regards to the airport.

His residence there appeared to depend upon the kindness of strangers. Individuals who heard his story sent him money within the mail. A traveler once gave him a sleeping bag and a camping mattress.

Within the Spielberg film, Tom Hanks plays a refugee who’s rendered stateless and becomes stuck in Recent York at Kennedy Airport after a military coup in his fictional homeland.

Charles de Gaulle Airport said in its statement on Sunday that its entire staff and community had cared for Mr. Nasseri “as much as possible for a few years.”

However the airport noted that “we’d have preferred that he discover a real shelter, as he was affected by psychological problems.”

Still, it appeared that Mr. Nasseri was content along with his surroundings, living inside a spot related to each freedom and frustration.

“The airport shouldn’t be bad,” he told The Times in 1999. “It is rather energetic and functions every single day. I see different passengers every week from everywhere in the world.”