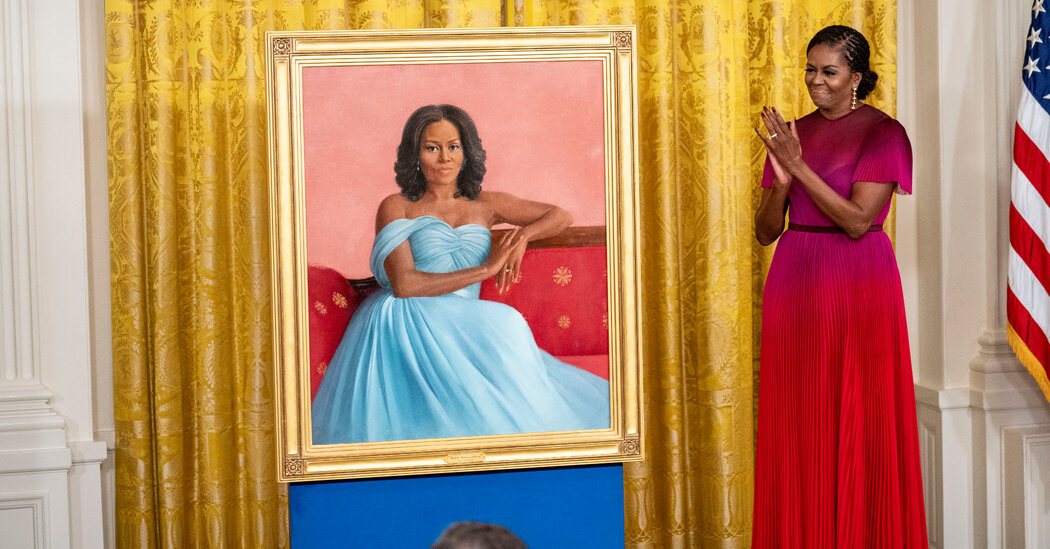 How does a primary lady claim her part in history? How does she sum up her accomplishments in her non-job job?

With a book, sure. And along with her official White House portrait: that painting that hangs in perpetuity with all of the paintings of the ladies who got here before, and tells the story not only of the person, but in addition of her place in the chief continuum.

That’s, in some ways, the final word example of the art of political image-making.

So it seemed, anyway, on Wednesday, when the official portraits of Barack and Michelle Obama were revealed in a ceremony on the Biden White House. (Normally this is able to have happened in the course of the Trump administration, but Donald J. Trump never scheduled the standard unveiling.)

Mr. Obama’s painting, by the photorealist artist Robert McCurdy, depicts the president in a dark suit, white shirt and silver tie against a white background, jacket buttoned, hands in his pockets, looking straight on the viewer. Relaxed, but with a coiled energy and a way of the portent of the office.

Mrs. Obama’s portrait, nonetheless, is something else. Created by Sharon Sprung, it shows her in a sky blue chiffon evening dress with a pintucked bodice, a single strap falling off one shoulder, sitting casually back on a red couch within the Red Room of the mansion. More relaxed and more romantic than the portraits of her immediate predecessors — Hillary Clinton and Laura Bush were captured standing, buttoned-up and wearing black (Mrs. Clinton in a pantsuit and Mrs. Bush in a night shirtdress) — it’s also rife with Easter eggs.

The dress, for instance, is by Jason Wu, the Taiwanese-Canadian designer who’s a Latest York Fashion Week stalwart and who rose to fame because the creator of Mrs. Obama’s first and second inaugural ball gowns (and the dress she wore to her husband’s farewell presidential address in Chicago). Indeed, Mr. Wu’s own success during that period was closely linked to the way in which those dresses looked as if it would reflect the fairy tale that the Obama election represented. The promise that, as Mrs. Obama said within the portrait unveiling, “there’s a spot for everybody on this country.”

Coincidence? Not remotely. The blue dress was chosen specifically for the portrait, said Meredith Koop, the stylist and consultant who has been working with Mrs. Obama since her time within the White House. Ms. Koop said she had prepped the look in January 2017, just before the transfer of power.

“I wanted something timeless and dreamy,” Ms. Koop said. “It got here all the way down to Jason’s ability to make clothes for Mrs. Obama that made her feel each comfortable and exquisite, as he had done for thus many occasions.”

It’s a reminder of how much Mrs. Obama, during her time within the White House, used fashion and the general public’s fascination with what she wore (whilst she, like many first ladies, also found it puzzling and frustrating) as a tool of communication and soft policy: to shine a highlight on young designers of color, designers who represented the melting pot of America, and designers who championed inclusivity. First ladies before her had supported homegrown designers, but never had they approached their image-making quite as strategically and comprehensively.

Just because the more casual posture within the portrait is a reminder of how she destuffed her role, owning the title “hugger in chief,” swapping suit jackets for cardigans and pantsuits for patterned dresses, “mom” dancing with Jimmy Fallon, and otherwise redefining a number of the old strictures of first lady-dom.

And just as the very fact the dress features Mrs. Obama’s bare arms (a rarity in first lady portraits — you may have to return to Lady Bird Johnson in 1968 to seek out a primary lady exposing any arm) reflects the way in which Mrs. Obama’s physical power became each a lightning rod for many who would attack her with racist stereotypes, and shorthand for her strength of character. Enshrining them within the White House portrait is, perhaps, the final word “we go high” response. As was not lost on social media.

“@MichelleObama got the memo from Black Women in all places to point out those amazing arms,” went one tweet.

“FLOTUS owns the Second Amendment: the proper to reveal arms. Thanks @MichelleObama” went one other.

None of that is an accident. Because the designer Thom Browne (who made the dress and coat Mrs. Obama wore within the 2013 inaugural parade) told The Latest York Times of the primary lady, “She realized very early on that all the things she did had ramifications.” In decisions made for posterity, the main points matter.