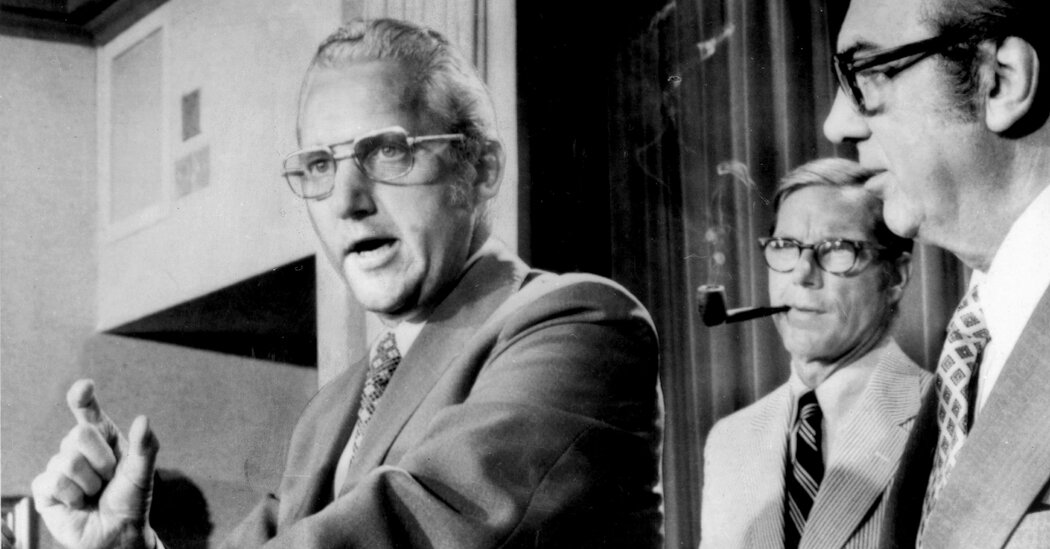 Moon Landrieu, who reshaped racial politics in one in all the nation’s most polyglot and irrepressible cities, Recent Orleans, where he won the mayor’s office in 1970 with a rare coalition of white and Black supporters, died on Monday at his home in Recent Orleans. He was 92.

The death was confirmed by Ryan Berni, a longtime aide for the Landrieu family.

As mayor, Mr. Landrieu championed the development of the $163 million Louisiana Superdome, drawing tourists and a national highlight to Recent Orleans. After serving eight years in City Hall, he was named secretary of housing and concrete development in 1979 by President Jimmy Carter and remained in that post through the tip of the administration, in 1981.

He also founded something of a political dynasty: His daughter Mary Landrieu was a United States senator from Louisiana from 1997 to 2015, and his son Mitch followed in his father’s footsteps as Recent Orleans mayor, serving from 2010 to 2018.

A grandson of French immigrants, Mr. Landrieu had been a gregarious child, nicknamed Moon, who grew up within the racially mixed, working-class Recent Orleans neighborhood of Broadmoor. (He legally modified his given name, Maurice, to Moon during his first mayoral campaign.) By the point he was in law school, within the early Fifties, he had embraced integration in a city where the Black population nearly equaled the white one. (It might later surpass it.)

Serving within the Louisiana House of Representatives within the early Nineteen Sixties, Mr. Landrieu put up an often lonely fight against an onslaught of state measures intended to undercut federal civil rights mandates.

“They were passing segregation laws every other day, and the one hand that will go up and say no was his,” recalled Norman Francis, a longtime friend and the previous president of Xavier University of Louisiana, a historically Black Roman Catholic institution in Recent Orleans. In the autumn of 1952, Mr. Francis became the primary Black student to be admitted to Loyola Law School, also in Recent Orleans. When Mr. Francis arrived early on the primary day of classes, Mr. Landrieu was one in all three white students who approached him.

“Those three guys walked as much as me and said, ‘We wish you to know that in case you ever need a friend, we’re going to be your friend,’” Mr. Francis said in an interview for this obituary in 2013.

Mr. Landrieu rose in local politics by nurturing the crosscultural connections he had developed as a boy, whilst many other Southern leaders of his era exploited racial division.

“In those days there have been two sorts of populists,” said Walter Isaacson, the journalist and historian who also grew up in Broadmoor and who covered Mr. Landrieu as a reporter within the Seventies. “George Wallace and others hijacked Southern populism and made it racist,” he continued, also in a 2013 interview, referring to the Alabama governor, “but there was one other style of populist who truly believed you might have a working alliance of working-class Blacks and whites.”

Mr. Landrieu championed integration, whether in public pools or corner bars, while serving within the Legislature from 1960 to 1966, the City Council from 1966 to 1970, after which as mayor. He pressed for one measure that integrated drinking establishments not long before Recent Orleans was to host its first Super Bowl, in 1970.

He also pushed for the creation of the town’s Human Relations Committee, which arrange an “answer desk” that took complaints from Black residents who were denied certain sorts of jobs. When he became mayor, he required supervisors of city employees to look at a movie, titled “Black and White: Uptight,” that explored the nuances of racism.

He startled many individuals by hiring a Black man, Terry Duvernay, as his chief administrative officer, the highest nonelected position in city government. One other aide was Donna Brazile, a young Black woman who became a top Democratic political strategist, the manager of Vice President Al Gore’s 2000 presidential campaign and a television pundit.

“This was the massive moral issue of our time,” Mr. Isaacson said of integration, “and Moon Landrieu was out in front, which was each brave and moral, but in addition politically savvy.”

Even in an era of urban upheaval and outstanding mayors — including John V. Lindsay of Recent York, Kevin H. White of Boston and Richard J. Daley of Chicago — Mr. Landrieu stood out within the South, and never only for his civil rights record.

He could possibly be prickly and combative, particularly with the press — he called Mr. Isaacson “boy reporter” — and he promoted development and tourism, sometimes on the expense of preservation. Besides the Superdome, he supported a promenade along the Mississippi River that became often called the Moon Walk. He was criticized for razing historic buildings within the Central Business District, including the St. Charles Hotel. But he also helped prevent the French Quarter from being bisected by a proposed highway.

Mr. Landrieu was elected president of america Conference of Mayors in 1975, a position from which he argued for more federal aid for cities, including for Recent York when it faced bankruptcy.

When he left the mayor’s office in 1978, he was succeeded by Ernest N. Morial, often called Dutch, the town’s first Black mayor.

“We probably wouldn’t have had a Black mayor on the time that Dutch became mayor if Moon had not been mayor before him,” Mr. Francis said. “Moon took the spears within the back.”

Maurice Edwin Landrieu was born in Recent Orleans on July 23, 1930, to Joseph and Loretta (Bechtel) Landrieu. His father worked in a city power plant, and his mother ran a food market out of the front of the family’s shotgun house on West Adams Street. Mr. Landrieu recalled being confused as a baby at seeing his mother hug and kiss Black babies in the shop whilst their parents, unlike some white customers, rarely entered the living area of the house.

He attended Jesuit High School, graduating with honors, and entered Loyola University on a baseball scholarship. After he graduated from law school in 1954, he served three years within the Army, then opened a law practice on his return home.

After his political profession, Mr. Landrieu became a state appellate judge in Louisiana, serving from 1992 to 2000.

His daughter Madeleine Landrieu was also a stage judge and is now dean of Loyola University Recent Orleans College of Law.

His son Mitch formed his own multiracial coalition to win election as mayor of Recent Orleans in 2010, becoming the primary white person to accomplish that since his father. In 2021, President Biden made the younger Mr. Landrieu a senior White House adviser and national infrastructure coordinator.

Along with his son Mitch and his daughters Mary and Madeleine, Mr. Landrieu is survived by his wife, Verna (Satterlee) Landrieu, whom he married in 1954; six other children, Mark, Melanie, Shelley, Martin, Melinda and Maurice; 37 grandchildren; and 16 great-grandchildren.

Moon Landrieu’s strong stance on integration helped him win enormous support from Black voters, including about 90 percent of the Black vote within the 1969 Democratic primary for mayor and 99 percent in the final election. He received about 40 percent of the white vote in each races.

In a May 2020 interview marking 50 years since his inauguration as mayor, he noted that his fight for integration “wasn’t just a matter of racial justice.”

“I recognized as a politician, as a legislator and councilman, that we were wasting a lot talent,” he said, “wasting a lot energy by precluding Blacks from participation in all matters — government, business and all of the vital matters of the economics of the town.”