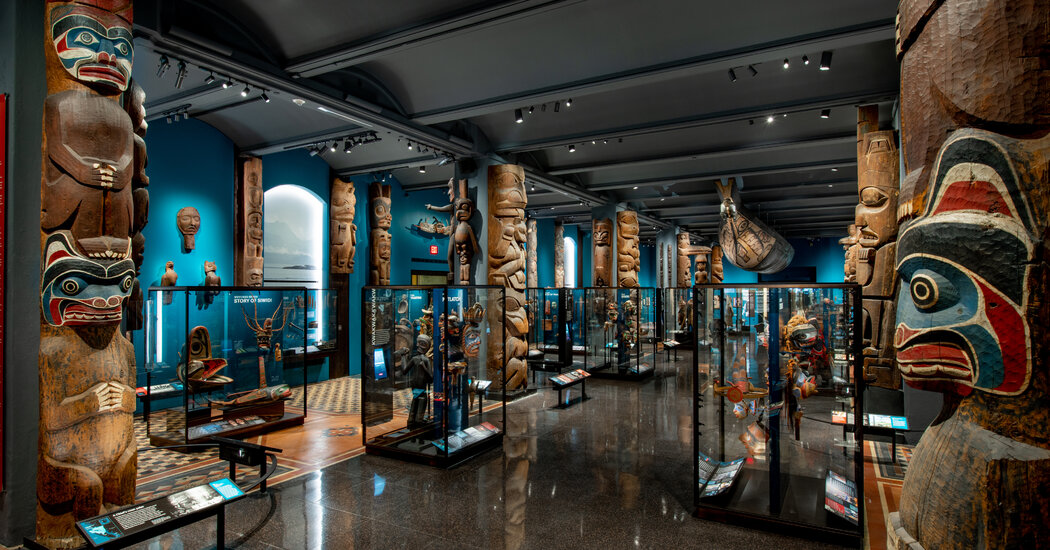 Crafted of wood, iron, plant fiber and animal sinew, the model of 10 men paddling a canoe would strike most viewers as a ravishing object. But to Haa’yuups, head of the House of Takiishtakamlthat-h of the Huupa‘chesat-h First Nation, on Vancouver Island, Canada, it also holds a mystical power. A spirit canoe, it represents the ripple of invisible oars within the water — a sound that individuals of his community report hearing after they’ve purified themselves through fasting and bathing.

When the Northwest Coast Hall on the American Museum of Natural History reopens to the general public on May 13, after a five-year, $19 million renovation, the spirit canoe — which was not previously shown — will likely be considered one of greater than 1,000 artifacts on view. Organized by Haa’yuups and Peter Whiteley, the curator of North American ethnology on the museum, the redesigned exhibit expresses the perspectives of the ten nations whose cultures are on display: placing an emphasis on the spiritual and functional purposes of the objects for the individuals who made them, and incorporating testimony from community representatives about government repression of their culture.

The Northwest Coast Hall was the primary gallery to open on the museum. Inaugurated in 1899 by Franz Boas, a large of anthropology who conducted extensive field work within the Pacific Northwest, it embodied what was on the time cutting-edge pondering. At other museums, notably the Smithsonian Institution in Washington, Indigenous people were considered “savages” who needed to be “civilized.”

In radical contrast, Boas presented non-Western artifacts because the fruits of varied sophisticated civilizations. There wasn’t only one culture toward which all people were advancing. He popularized the thought of “cultural relativism,” wherein societies exist as parallel universes, with beliefs and behaviors which might be products of their environments. “It had a revolutionary quality,” Whiteley said. “Until then, ‘culture’ couldn’t be pluralized. Boas wanted to put people and objects in context.”

But yesterday’s revolution can come to appear retrograde. Within the renovated hall, contextual labeling for the cultural artifacts has been amplified to portray the viewpoints, within the voices of Indigenous people, of the communities that made and used them. In a presentation of Haida carvings, as an example, there may be a discussion of the End of Mourning Ceremony, which is held to release the spirit of the deceased a 12 months or more after death. To this explanation is added a pungent commentary: “When missionaries arrived at our shores, they forced our Ancestors to adopt Western burial practices. Despite this, lots of our traditions around death, mourning and remembrance have endured and are still practiced today.”

Notwithstanding these curatorial interventions, some critics argue that the very idea of storing masterpieces of colonized societies in an anthropological museum is outdated. Haa’yuups is considered one of them. “I still consider that that material belongs to us and it’s going to never be given its true value in some other setting than our own Houses,” he said.

Since 1998, the museum has returned 1,850 objects that hold singular importance to American Indigenous people, guided by the Native American Graves Protection and Repatriation Act of 1990. But communities are looking for more. In an announcement this week, the museum said it was in discussions with the representatives of Indigenous nations and “pursuing a process for limited repatriation as we explore multiple ways of continuous our relationship.”

Haa’yuups said he knows that a large-scale restitution is unlikely to occur anytime soon, and so he accepted the museum’s invitation to take part in the renovation project. Consultants from nine Indigenous nations were enlisted.

“I wanted the treasures to be contextualized in a wealthy way and seen because the wealth of our people who had been stolen away,” Haa’yuups explained. “I desired to see every little bit of background within the display cases crammed with words of the individuals who lived there. The only most significant thing we could do is feature in some way the range of belief systems that existed on the Northwest Coast and underline the particularity and similarity between them.”

Public institutions are increasingly attentive to charges of post-colonialism and racism. In January, the museum faraway from its front steps a bronze statue of Theodore Roosevelt astride a horse and flanked by a Native American and an African, each bare-chested. In one other gesture, it’s in planning stages for mounting within the rotunda a land acquisition plaque that acknowledges that its constructing stands on land that after belonged to the Lenape. (The Metropolitan Museum installed such an indication a 12 months ago, after adding its first full-time curator of Native American art, Patricia Marroquin Norby.)

The physical alterations to the Northwest Coast Hall, made in collaboration with the architect Kulapat Yantrasast of the firm wHY, are subtler. The transitions between eight alcoves and 4 corner galleries that represent 10 nations were opened up. “It’s not a radical departure,” said Lauri Halderman, vice chairman for exhibition. “It’s down in the small print.” Formerly bordered on three sides, the alcoves have been reconfigured with walkways that ease visitor circulation and, on a conceptual level, reflect the porosity between these communities.

Different nations were interconnected in complex patterns of trade. The showstopper within the Northwest Coast Hall is a 63-foot-long canoe, which has been returned to this gallery, suspended from the ceiling, after being on display elsewhere within the museum for over 70 years. Carved from a single red cedar log around 1878, it’s the most important Pacific Northwest dugout canoe in existence. Its hybrid origins are still in dispute. The Haida, whose land encompassed cedar forests, probably shaped it and decorated the prow and stern with designs of an eagle and killer whale. Then the craft was acquired by the Heiltsuk people, perhaps as a dowry, and there it was adorned with sea-wolf imagery and carved benches. One in all the earliest pieces to enter the gathering, in 1883, the canoe was embellished for exhibition in 1910 with figures representing Tlingits on their approach to a potlatch ceremony. Colourful, yes, however the improper native people. In 2007, they were removed.

Looming majestically within the hall are picket crest poles, carved and sometimes painted, most of which were brought into the gallery during a previous renovation in 1910. In all, there are 67 monumental carvings, including house posts and other sculptures, ranging in height from 3 to 17 feet. The gallery also boasts headdresses, woven baskets, feast dishes and ceremonial curtains and panels.

A changing exhibition will showcase contemporary creations that stretch artistic traditions; in the primary rendition, sneakers, skateboards and basketballs are among the many featured objects. “There are very alternative ways of being an artist in the trendy world, and we thought we must always show some applied art,” Halderman said.

In the continuing technique of discovery, representatives of Indigenous cultures have reviewed items retrieved from the museum’s storerooms and located extraordinary treasures that were never on public display. To exhibit them, the showcases were redesigned, since the old ones were so shallow that they functioned best to carry fish hooks. (Boas was a fan of fish hooks.) Together with the “spirit canoe,” one previously hidden beauty is a finely woven conical hat from the late 18th or early nineteenth century that represents in semiabstract style men in a ship who’re hunting whales.

One artifact on exhibit within the Northwest Coast Hall is a beaver canoe prow that could be a replica of the unique, which was repatriated in 1999 after a delegation of tribal elders recognized it amongst a bunch of objects that the museum kept in storage. Garfield George, head of Deishú Hít, or the End of the Beaver Trail House, Raven moiety, Deisheetaan clan of Angoon, in Alaska, was considered one of the Tlingit visitors at that moment of discovery.

In October 1882, the U.S. Navy bombarded Angoon in a punitive act of retribution. “They gathered all of the canoes and chopped them up and burned them,” George said. But one canoe, which was probably out to sea on the time, survived. “It was called ‘The Canoe That Saved Us,’” he continued. Before the total onset of winter, sailors using that canoe were in a position to gather timber to construct housing and construct latest boats. “Afterward, the hull of the canoe cracked and so they cremated it prefer it was a human being,” George said. “But they never mentioned what happened to the prow.”

Nobody knew whether it even still existed. However it was documented in century-old photographs.

After they spotted its distinctive profile, the elders fell silent in reverential awe. Since its return to Alaska, at dedication ceremonies for a latest or renovated house, the prow is on display. “We bring it out at every potlatch,” George said. “It’s on a post and it faces our guests. It’s considered one of the primary things people see after they are available. We are saying, ‘Our beaver prow goes to regular your canoe, if you undergo what you’re going through now.’”

In a ceremony on May 4, representatives of the various nations in traditional dress, consecrated the Northwest Coast Hall. For some, it’s a bittersweet duty. Within the eyes of individuals whose animist religious beliefs endow power and spirituality to boulders and trees in addition to to people and beasts, the confinement of cultural artifacts in a museum is akin to incarceration.

Haa’yuups compares it to the exhibition of orcas in a marine theme park. “We don’t must have killer whales in captivity and we don’t must exhibit dance robes and rattles in museums,” he said.

But he acknowledges that the legacy of Boas and his successors is a fancy one. “For sure he’s considered one of the most important thinkers who brought people to where they’re today,” he said. “Boas in mounting the exhibit was particularizing people and was adamantly anti-racist. He argued that different cultural groups could feel the identical emotions and experience what other cultures experience. Yet he thought it was OK to steal things from the Northwest Coast and produce them for exhibit. He was a superb man and I actually have enormous respect for him. But he did things improper. He was human. I need to take a look at that aggressively.”