Must you follow fund stars Terry Smith and Nick Train?

Billions have been entrusted by investors lately to the care of the fund management firmament’s top stars, Terry Smith and Nick Train.

But a way of unease now pervades a few of the fans of those managers.

They might differ of their personalities, but their shared preference for large name consumer and technology stocks has these days been delivering some disappointing results.

Are we witnessing the twilight of the 2 fund management gods, celebrated for his or her exceptional level of out-performance between 2010 and 2020? Or will their long-term buy-and-hold approach come good?

Smith favours cosmetics, with stakes in Estee Lauder and L’Oreal and cigarettes in the form of Philip Morris, while Train places his faith in alcohol, owning Diageo, Fever-Tree, Heineken and Remy Cointreau. They each back Unilever and a mixture of tech stocks.

The 2 stars’ misfortunes are, after all, attributable to such shares’ fall from fashion.

The allure of those quality growth stocks has been lessened by soaring inflation and rates of interest, although opinion on Wall Street did appear to vary this week, sparking a chase for technology firms.

Despite this shift, some are asking whether Smith and Train needs to be responding to the brand new passion for ‘value’ stocks that are inexpensive, but – apparently – possessed of the potential for excellent things. Smith has shared his scepticism of this assessment.

The large Fundsmith, Smith’s best-known vehicle, can have provided a return of 65 per cent over the past five years, against a median of 43 per cent for similar global equity funds, however the fund’s value has dropped by 18 per cent since January.

The share price of the Smithson Investment Trust, which focuses on smaller businesses, has fallen by 37 per cent over the identical period.

As an investor in Fundsmith since 2015, I actually have been developing something akin to a seven-year itch, although the whole value of my monthly contributions to the fund is up 45 per cent. I’m also in two minds over Smithson.

The five-year return from Finsbury Growth and Income, Train’s investment trust, has been 24 per cent, compared with 17 per cent for the common UK Equity Income trust.

Yet the trust’s share price has fallen by 15 per cent since January. The Lindsell Train UK Equity and Global Equity funds are also failing to glitter. Neither Smith nor Train seem able to retire, with Train promising seven more years.

They’ve also dealt – each in his characteristic fashion – with criticism. Train apologised profusely but believes his portfolios, that are stuffed with ‘outstanding firms’, will bounce back.

The notoriously blunt Smith picked a fight with lacklustre Unilever over its sustainability fixation. But he also argues that the businesses he owns have generous profit margins, and points to the above-average ‘free money flow yields’ of Alphabet and others. It is a measure of the amount of cash generated by an organization and is Smith’s primary valuation yardstick.

These assurances mean I’m unlikely to take my leave of Smith, in the intervening time. I’m watching to see whether Wall Street’s tentative optimism persists. 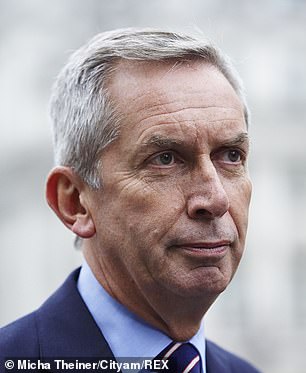 Unease: Funds run by Terry Smith (above) and Nick Train are down by double digits this yr

Others are also persuaded that Smith and Train will stage a comeback, while warning over the risks of over-reliance on the celebrities.

Darius McDermott of FundCalibre comments: ‘If you happen to imagine that inflation goes to remain higher for longer, then there’s a very good case for moving to banks and commodities, like oil. But I would not be selling Smith to make the move.’

Lipski suggests Artemis SmartGARP Global Equity as a complement to Fundsmith, and Stonehenge Best Ideas Equity in its place. Holders of Lindsell Train UK Equity could consider Jupiter UK Special Situations as a complement, or Ninety One UK Alpha in its place.

Smith and Train were considered ideal decisions for anyone making a primary foray into long-term stock market investing, which explains why Fundsmith is the UK’s largest fund. But they’ve growing competition from younger managers running smaller funds.

Ben Yearsley at Shore Financial cites Stephen Yiu at Blue Whale Growth and Zehrid Osmani at Martin Currie Global Long-Term Unconstrained. Following any star to the exclusion of others could be a source of woe, because the Neil Woodford scandal highlights. But Woodford betrayed his investors by radically changing his approach.

It is feasible to be temporarily irritated that Smith and Train are committed to their strategies, while being appreciative of such consistency.