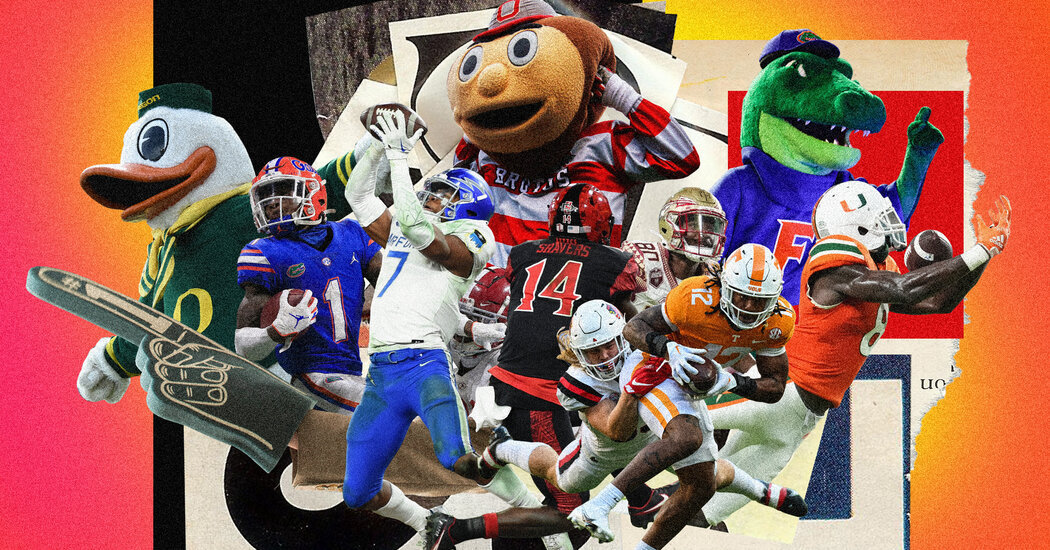 I went to college on the University of Texas at Austin, a spot where football reigns supreme. I wasn’t much of a fan, but lots of my classmates showed up as dyed-in-the-wool devotees. Their zealotry wore me down, and I finally joined the fans who packed into Darrell K. Royal stadium for each single Saturday home game. I used to be swept up, together with everyone else, within the annual cycle of anticipation, fanaticism, disappointment and acceptance.

I could never wholly embrace the sport, though. I felt strange watching guys of their late teens and early 20s, lots of them Black, play in a packed stadium on the flagship university of the one state to secede twice — once from Mexico, and nonetheless from the Union — in order that it could keep enslaving Black people. All of the while, the university sold the games as a part of a storied tradition but ignored shameful details, just like the proven fact that Texas had one among the last major college-football programs to integrate, or that its most celebrated coach, Darrell K. Royal, objected to integrating the team in 1959.

How could I reconcile my discomfort with my love of the sport? Enter hype videos: do-it-yourself compilations of divinely timed stiff arms, probably the most beautiful jukes you’ve ever seen, otherworldly one-handed backward-diving catches and other athletic feats.

Some colleges make their very own official hype reels, together with abridged versions for TikTok and Instagram, to advertise football programs to fans and recruits. A few of these are excellent, but on the entire they’re somewhat dishonest — it feels as if I’m being lied to once I’m scrolling through Instagram and are available across offensive highlights for Iowa football, a program notorious for its perennially bad offense. These videos are also aesthetically predictable, normally starting with solemn shots of a stadium meant to convey a program’s achievements. Greater than anything, these videos are propaganda controlled by administrators and communication strategists, meant to burnish teams’ brands of administrators and communication strategists. They’re not necessarily bad, but they’ve little to do with the players’ experiences.

I prefer the unauthorized D.I.Y. ones from YouTube accounts with names like Sick EditzHD and Dawg B. Beholden to no team and no licensing laws, their videos are rare examples of passion creeping between the cracks of school football’s rigorously maintained facade. Reasonably than the staid orchestral scores or generic hip-hop beats that sound as in the event that they were made by an A.I., these clips are set to trap music, a raw hip-hop subgenre from the South named for the drug-dealing milieus it originated in. Importantly, trap is the music that many college-football players actually hearken to. The reels’ soundtracks are unlicensed aggressive remixes of pop songs and explicit versions of Future and other rappers, which might almost definitely never be utilized in official hype videos.

These songs accompany shots of players piercing offensive lines to make vicious sacks, grown men hurling other grown men onto the turf and elegant 60-yard touchdown passes. Video makers are likely to use the identical clips over and once more, but I don’t mind. Nearly a dozen times before the 2016 season, I watched JuJu Smith-Schuster, a large receiver on the University of Southern California, point at an approaching defender before brutally stiff-arming him as the usC. sideline erupted into celebration. I might gladly watch those 17 seconds one other dozen times.

Unofficial hype videos give us a view into the culture that we are able to’t see on TV. They put us closer to that world than any broadcast can.

The hype-video auteur’s vision of school football might be much closer to the players’ vision than the N.C.A.A.’s. There are not any family-friendly, business-minded considerations in these artful instances of copyright violation. Probably the most profitable teams don’t get disproportionate airtime. To Dawg B and his contemporaries, an excellent play is an excellent play, whether it’s from college-football royalty like Alabama or a gumptious insurgent on the game’s margins. They highlight the players’ culture too: These videos freely show college athletes doing the Griddy as they have fun big plays, something the N.C.A.A. penalizes.

These videos are an inadvertent guide for the way college football should actually be presented. Almost half of Division I college-football players are Black; the game is often a Black experience refracted through mostly white commentators, fans, boosters, coaches and TV executives. But television’s presentation of the sport elides Black culture and contorts football right into a bland corporate affair. This version of the game is a lucrative business scheme hiding behind a facade of dignified amateurism that not exists.

Unofficial hype videos give us a view into the culture that we are able to’t see on TV. They put us closer to that world than any broadcast can. There isn’t any banal color commentary, no players milling around between plays and no footage of coaches who inhale thousands and thousands of dollars of public money. As an alternative we get to see players dapping each other up, flipping into end zones, swag browsing, catching the woah — just being supremely good at the game and carrying a billion-dollar industry on their backs. Watching them, you catch a whiff of their exuberant confidence: Any type of failure is inconceivable to each you and the players. There isn’t any mediocrity in a world scored to bass-boosted Lil Durk songs.

Ali Breland is a reporter at Mother Jones, where he writes in regards to the web and politics.