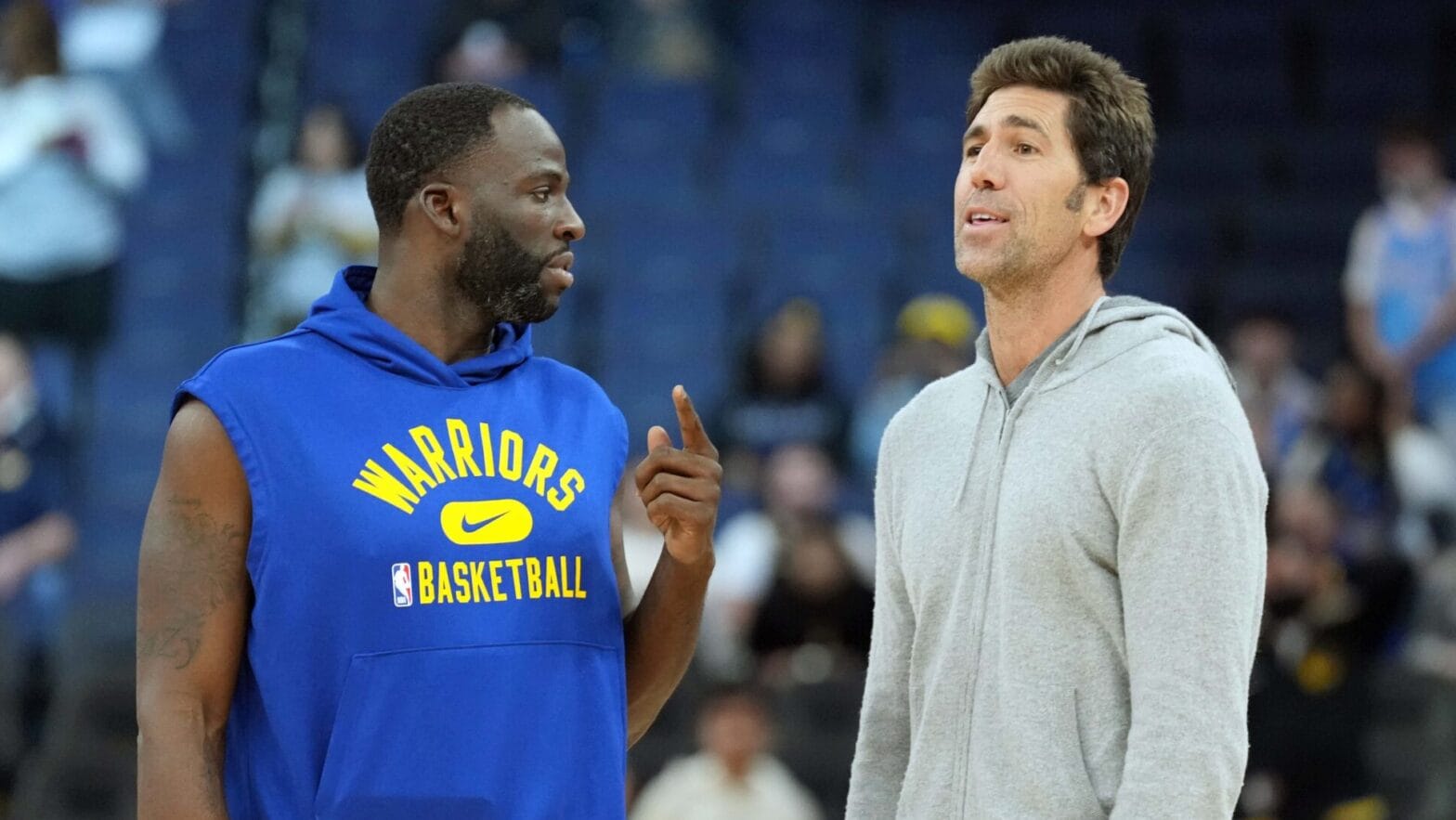 Bob Myers has seen all of it — from championships to struggles with injuries — in his time as general manager of the Warriors.

After nursing overlapping injuries through the regular season, Curry, Thompson and Draymond Green are back and fully healthy for a postseason run. Though Iguodala stays sidelined together with his own ailments, the Warriors have also leaned on a freshly minted All-Star (Andrew Wiggins) and a handful of young players.

That offers Warriors general manager Bob Myers more perspective on what it implies that Golden State hosts the Dallas Mavericks on Wednesday in Game 1 of the Western Conference finals (9 ET, TNT).

“What makes it most gratifying is how hard it’s,” Myers told NBA.com. “Having a few years out of the playoffs was not fun. But I even have a greater appreciation for being here and where we at the moment are.”

Myers reflected on that journey with NBA.com, including the Warriors’ trio, Jordan Poole’s development, declining to accumulate a middle before the trade deadline and more. The next Q&A has been edited for brevity and clarity.

How will Mavericks, Warriors match up in Western Conference finals?

What were your expectations of what this group could accomplish each with the outcomes and development, and the way has that played out this season?

Myers: Having the health issues we had the previous couple of years gave me pause so far as hoping or expecting anything. It made me realize how fragile these things is. What we did with the front office and Steve [Kerr] is just attempt to put one of the best team we will together, hope for good health and see what we will make of it in order that we actually give Steph, Klay and Draymond one other shot at every little thing. They deserve it. That’s been great seeing them have a probability to attempt to do it again. Expectations change day-to-day. I liked our signings and our draft. But you never know the way it’s going to go.

How would you evaluate how the team has done with leaning on the championship-tested players while also developing the young guys?

The challenge for us was less about integrating youth because it was having our core play together. It was internally hard to not see Klay, Steph and Draymond play the whole season. That was not ideal. The struggle was less in regards to the must develop youth as much because it was knowing what sort of team we now have, because we haven’t been healthy the whole 12 months to see it. We tried to try this on the fly. Thank goodness they got back in rhythm pretty quickly. That was the toughest part.

On condition that, to what extent did you’ve concerns that Steph, Klay and Draymond played only 11 regular-season minutes together? On one hand, they’ve already played together in five Finals. But alternatively, they’ve loads of teammates that never played with them before this season.

Myers: It’s easy to think this team is similar as those past championship teams. But they’re different. Andre is back, but hasn’t played much within the playoffs. Kevon Looney has been playing and had a great Game 6 [vs. Memphis]. Around them, we’ve had different guys that help. We’ve had different coaches. The constant is those players — their leadership, competitiveness and pedigree is invaluable within the playoffs. That never went away and can probably never go away.

That’s so necessary as you are trying to navigate the playoffs to have guys which have had the boldness with never having done it before. It doesn’t mean you’ll do it again. However it gives you a way that you simply’re able to it. You don’t have that fear or doubt. However it’s still daunting and never easy. Those three paved the best way for the organization as we attempt to do it again. It’s inspiring to see them undergo the journey together again.

You obviously drafted Poole for a reason. But what has gone into his development this season and within the playoffs?

Myers: We saw the potential. But once we draft players [late in the first round], realistically it’s really hard to know where it’s going to go. We thought it was possible, but we didn’t know he would reach it. But credit to him and the coaching staff that put the time in to perfect his craft. I’m completely happy for him that he’s showcasing this on a giant stage, showing his skillset and fitting in with guys which can be leading him.

He’s been great, and I don’t know if we’d be where we’re without him. It’ll be interesting to see where all of it keeps going. It’s an awesome experience, but he’s never been within the playoffs before this 12 months. That’s what you would like from any young player — to taste the playoffs and get a way of it. Quite a lot of players play a protracted profession and don’t get this far. For him to be this young and get a chance, it’s really very helpful.

Where do you see Poole going from here?

Myers: Each round gets harder, however it’s all informative. You search for consistency, confidence and skill. The playoffs are essentially the most informative time of the 12 months. You possibly can’t hide through the playoffs. It’s just too competitive, too physical and too high level. As an executive, it’s one of the best time to guage your team assuming that you simply are healthy. For those who don’t make it to the playoffs, it’s hard to know much. But for those who do, it’s unbelievable since you get to see what’s what. With Jordan, it’s one other probability to look at him grow. He’s answered the bell: began, not began, played big minutes, played fewer minute; credit to him for at all times being ready. We’re going to definitely need him on this round and nonetheless far we will go.

What was the thought process with not adding a giant entering the trade deadline, and the way have you ever seen the team adjust toward not having a standard center?

Myers: The league is realizing that size is basically necessary, however it’s more about positional size than size at the middle spot. We didn’t have an awesome option available to us. Secondly, I used to be under the impression we might have James Wiseman. He was trending well. We thought he’d be back, able to go and help us with that vertical space. That didn’t occur and his rehab hit a bump within the road post deadline. That put us in a tricky spot, and the market was pretty dry. We needed to march forward.

Size still matters. But Looney’s been an unbelievable, steadfast guy that always gets neglected. When we’d like to go larger, Draymond and Looney have shown they’ll do it. They’re capable. They’re not 7-feet tall, but they’re versatile, switchable and really smart. We found a way. We’ll see if it keeps working and if we proceed to win.

Wiseman credited your positive reinforcement during his recovery. What’s been your message to him?

Myers: The one thing I’ve been saying is he has a lot time left within the NBA and continues to be very young. He’ll overcome it. It’s different than Curry’s ankle [injuries], but I remember when Curry was going through the frustrating ankle rehab and stopping and starting. It’s very frustrating for a young player. You simply tell him to stick to it and he’s going to get through it. It was great for James to look at Klay together with his rehab and comeback.

James is a very brilliant guy, hard working and really diligent. He has a positive attitude. He’s handling it one of the best he can and knows he has loads of years left within the NBA. I’m sure it isn’t easy. But he’s taking it day-by-day. He’s beginning to get back on the court now, so it’s all moving in a greater direction.

How have you ever seen Andre [Iguodala] handle his different role and his injuries?

Myers: He’s frustrated. He desires to play. Frankly, he could help us. He’s attempting to get back. Because he hasn’t been in a position to play, he’s used his voice and has been very vocal. He’s one of the respected players within the league and could be very, very brilliant. He communicates on the bench, whether it’s with our coaches, young players and our older players. That matters, especially as you go deeper within the playoffs.

The cameras caught your response shortly after Gary Payton II’s injury against Memphis after which talking to Joe Lacob at your courtside seats afterwards. What do you remember about that moment?

Myers: Those are the toughest things. Postseason injuries, I’ve been seeing too a lot of them. I suppose that’s what happens whenever you’ve been in loads of playoff series. You’re going to have some good times and a few hostile times. Hearing that Gary’s X-ray showed a chip in his elbow, it sucks. There’s nothing good about it. There’s no words that can assist. It’s the players’ best time of their lives. To see Gary despondent and back within the locker room and listen to he’s done for the sport, series and more, those are tough moments. I used to be just explaining to Joe that Gary is completed, and that it’s not good. Thankfully, there’s no surgery. We didn’t know at the moment. But those moments are bad.

When Steve Kerr was in Health & Safety protocols, how much did you touch base during his recovery?

Myers: Quite a bit. He was texting me through the games. It was so tough. I felt bad for him. His whole season is equipped to make the playoffs and coach within the playoffs. To not get that chance was brutal. But he was texting me in Game 6 [vs. Memphis], ‘Why are we turning it over?’ I said, ‘Yeah, absolutely that’s an issue’ (laughs). It’s weird to have your head coach text you through the games. However it’s advantageous and he’s back now. I just felt bad for him.

With Mike Brown taking the top coaching job at Sacramento following the playoffs, what do you’re taking away from his six years with you?

Myers: He’s been great. I’ll miss the guy and the coach. You develop relationships with folks that are greater than just work related. I’ll miss seeing him on a regular basis. But his acumen and what he delivered to our defense goes to be hard to switch.

I presume too early to know the way you’ll address his eventual departure?

Myers: We’re not even fascinated with that stuff at once. People think we’re, but we’re not doing that at once. We got more games to play.