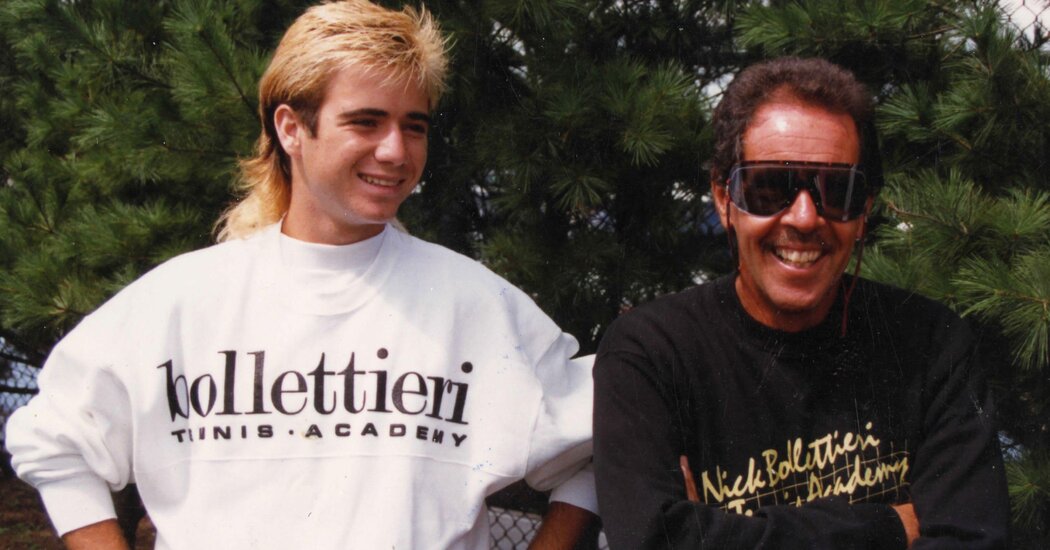 Nick Bollettieri, who never competed in elite tennis but was once the world’s most famous tennis coach, developing 10 players who reached the No. 1 international rating in singles, died on Sunday at his home in Bradenton, Fla. He was 91. David R. Legge, a journalist who’s writing a certified biography about Bollettieri, confirmed his death. Legge said Bollettieri began having renal problems several months ago and that his health had deteriorated since then.

Bollettieri was inducted into the International Tennis Hall of Fame in Newport, R.I., in 2014 as a “contributor” to the sport. He joined only three others honored solely for his or her coaching, the longtime Australian Davis Cup captain Harry Hopman and two other Americans, Vic Braden and Dr. Robert Johnson, an advocate for African American junior tennis who mentored Althea Gibson and Arthur Ashe.

Bollettieri co-founded the Port Washington Tennis Academy on Long Island in 1966, its star pupils including John McEnroe and Vitas Gerulaitis.

Within the early Eighties, he opened the Bollettieri Academy in Bradenton, Fla., on what were then tomato fields, pioneering the concept of live-in facilities for promising junior tennis players. He sold it in 1987 to the sports agency IMG. Now referred to as the IMG Academy, it tutors young athletes in lots of sports and has dozens of tennis courts for the Bollettieri Tennis Program. Bollettieri, who founded that program, became its president.

Serena and Venus Williams, Monica Seles, Andre Agassi, Jim Courier, Maria Sharapova, Marcelo Rios and Boris Becker are among the many players who trained or boarded on the academy.

Bollettieri was known for a hard-driving style. As Sports Illustrated put it in 1980: “He yells at kids, insults them. They usually work harder. He grabs players and orders them off the court. They usually work harder. At junior tournaments, when the Bollettieri contingent arrives, the opposite kids have a look at them as if the Marines had just landed. They’re the products of a tougher type of training.”

Nicholas James Bollettieri was born on July 31, 1931, in Pelham, N.Y., in Westchester County. His father, James, was a pharmacist, and his mother, Mary Rita (DeFillipo) Bollettieri, was a homemaker.

He graduated from Spring Hill College in Mobile, Ala., in 1953, after which saw military service in an airborne division. After his discharge in 1957, he attended law school on the University of Miami. To earn money toward his tuition, he taught tennis at area courts, charging $1.50 for a half-hour lesson, though his experience was limited to some play as a teen. His first students included Brian Gottfried, who went on to an impressive tennis profession.

Bollettieri quit law school after one 12 months and worked during summers on the John D. Rockefeller Estate in Pocantico Hills, a hamlet within the Westchester town of Mount Nice, and winters on the Rockefeller-owned Doral Beach hotel in Puerto Rico, becoming its tennis director. He returned to Florida in 1978 and have become an instructor at what was then the Colony Beach and Tennis Resort in Longboat Key before opening his academy in Bradenton.

The ABC News program “20/20” profiled the academy in its early years, bringing it national attention.

“Nick is considered one of the youngest, most passionate guys on the planet,” Jim Courier, who had won 4 major singles titles, told The Latest York Times on the time. “No baloney. He’s not doing it for the cash. He loves making a difference and getting meaning from it. As corny as that sounds, it’s true. He has family and more wives than anyone should ever have, but Nick is someone who wakes up within the morning and craves going to the office. It’s what keeps him going.”

Bollettieri was the instruction editor of Tennis Magazine and published the memoirs “My Aces, My Faults” (1996, with Dick Schaap) and “Bollettieri: Changing the Game” (2014). He was the writer of the academic book “Nick Bollettieri’s Tennis Handbook” (2001).

In his later years, Bollettieri cut down on his schedule and did his coaching on indoor courts.

“Today the entire world is playing tennis, and plenty of years ago there have been about six countries,” Bollettieri told The Times in 2014. “Now we’re competing against the world, so it’s rather more difficult for me when someone comes up and says, ‘Nick, tell us about one other champion.’ I’m very reluctant.”