Nolan Ryan Had a Softer Side. He Just Hid It (Very) Well. 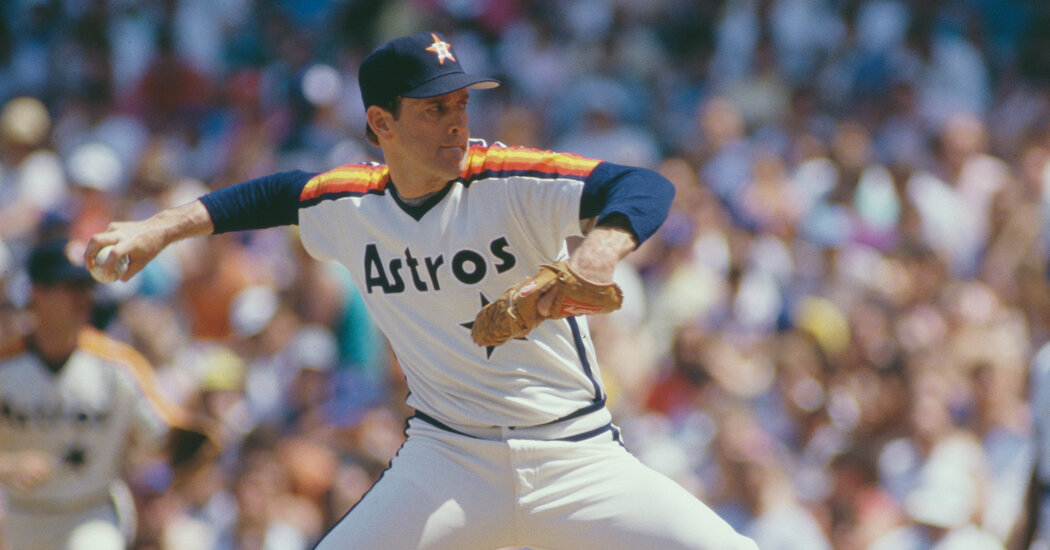 Just like the Beatles did shortly before him, Nolan Ryan performed at Shea Stadium and sang on the Ed Sullivan Show.

The previous is a widely known and well-told a part of Ryan’s life, the early days of a Hall of Fame profession that eventually launched the Ryan Express as if by rocket fuel. The latter, when he and all the 1969 Mets World Series-winning roster sang “You Gotta Have Heart” to a national television audience, is less known and one among the various surprising parts of a recent documentary, “Facing Nolan,” that surely will elicit smiles.

“I believed that was the worst suit I’ve ever seen,” Reid Ryan, the oldest of Nolan and Ruth’s three children and an executive producer of the film, said. Reid laughed and added: “I’m unsure the mustard suit was ever in. I do know he can’t sing, but that was funny.”

Nolan Ryan said that though it’d look as if he and his teammates were lip-syncing, they really were singing.

“We were all plenty enthusiastic about being on that show and the glory it was to be on it,” Ryan said during a recent telephone conversation. “However the highlight of the evening for me was that Eddy Arnold was there. I used to be a giant Eddy Arnold fan, and that made the night special.”

What’s each charming and disarming concerning the film, which began streaming on multiple services this week, is the surprising humility shown by Ryan. A Hall of Fame pitcher that also owns 51 major-league records — in response to the film’s count — Ryan has a legend that easily fills his native Texas, but to a few of his on-screen co-stars he is solely grandpa, who tells corny jokes and who, yes, cannot sing. And he loves it.

The high praise for Ryan is available in interviews along with his fellow Hall of Famers. George Brett, Rod Carew and Dave Winfield are amongst those that offer keen insight into the challenge that’s described within the film’s title. Pete Rose, too. Upon being reminded that Ryan finished second to Baltimore’s Jim Palmer within the 1973 American League Cy Young Award voting after a record-setting 383 strikeouts — in fact, Ryan also led the league that 12 months with 162 walks — Carew reacts as if hearing it for the primary time.

“You’ve got to be kidding!” Carew exclaims when told Ryan never did win a Cy Young.

That’s much more affecting today provided that among the many records he still holds are those for profession strikeouts (5,714) and profession no-hitters (seven; Sandy Koufax is second with 4). The standing ovations and star-studded testimonials echo throughout the film, in fact, however the insight of members of the family is what strums the emotions and offers the director Bradley Jackson’s work its touching humanity. The surprising, sturdy backbone of the story is Ryan’s wife, Ruth.

“People say that should you marry a baseball player, you actually marry baseball,” Ruth Ryan says within the film while visiting Nolan’s childhood home in tiny Alvin, Texas, and checking the progress of a tree he planted as a young boy. “There’s loads of truth to that statement.”

The 2 celebrated their fifty fifth wedding anniversary last month, though, after their second date in 1962, that milestone seemed as unlikely as Ryan’s eventual dominance after control problems had plagued his early profession.

It was not exactly a romantic outing: He took her to the Colt Stadium to see Koufax pitch.

“We were sitting behind the plate with a bird’s-eye view of Sandy Koufax,” Nolan explained.

Though she says she was initially irritated when the old pitcher and scout Red Murff warned her that someday she “was going to must share Nolan with the world,” Murff’s prediction got here true, and this film is that story. With a generational fastball (“appeared like bacon in a frying pan,” Roger Clemens says within the film), it was only a matter of time.

What was not inevitable was “Facing Nolan,” which essentially is a video memoir to his wife and their three children and 7 grandchildren disguised as a baseball documentary.

“He said no,” Reid Ryan said. “My mom said, ‘I’ve been all over with you, and also you’re going to do that movie with me.’ If it wasn’t for her, this movie wouldn’t have gotten done.”

“I’m not real comfortable talking about what happened in my profession and all of the things, and so I actually discouraged Bradley and them from doing it,” he said. “But my kids just kept on me. They felt prefer it was something I needed to do for my grandkids, and Ruth felt the identical way. So I finally agreed to do it.”