On the Met This Season, Opera Was Icing on the Cake 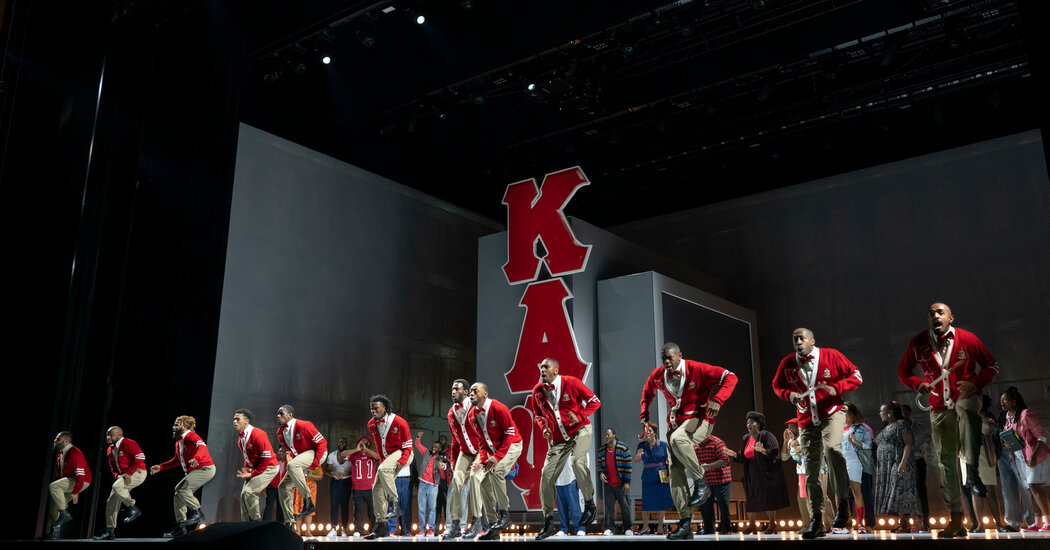 Has there ever been a Metropolitan Opera season just like the one which just ended? During which the stuff onstage — the homicidal brides, mystical pharaohs and longing stepsons — felt so anticlimactic? Over the past eight months, amid a labor battle, a pandemic that surged time and again, and a war, it was as if the true drama was in simply getting the doors open. Once that was achieved, what followed was almost inappropriate.

Or, to place it more accurately, what followed was like icing on the cake. Rarely has it felt so sweet to be contained in the gilded Met, has opera seemed — whatever you considered a given work, singer or production — a lot a present. A groundswell of gratitude was palpable throughout the season, which finished on Saturday evening with Verdi’s “Rigoletto.”

You felt it within the explosive ovation that greeted a virtuosic step-dance sequence in Terence Blanchard’s “Fire Shut Up in My Bones,” which opened the season as a double milestone: the primary production for the reason that pandemic lockdown in March 2020, and the primary work on the Met by a Black composer since its founding in 1883.

You felt it within the roaring curtain calls on the revival of “Akhnaten,” which proved once more that Philip Glass’s idiom has been welcomed by the Met audience as wholeheartedly as those of Mozart or Puccini.

Around this time a yr ago, it appeared like the nice battle can be returning after a canceled 2020-21 season. Bad blood was within the air: The Met’s unions were furious at the corporate’s general manager, Peter Gelb, for his insistence that unpaid furloughs were the one way it could survive the long lockdown. The situation grew so bitter that it seemed possible a strike or lockout would keep the Met closed past the planned opening night.

However the promise of coming back after 18 months proved too strong to withstand, and the unions and management got here — warily — to terms. Nobody who was on the outdoor performances of Mahler’s “Resurrection” Symphony over Labor Day weekend, or, especially, on the return indoors for Verdi’s Requiem on the twentieth anniversary of the Sept. 11 attacks, will forget the relief and joy of the Met once more making live music at Lincoln Center.

The opening months of the season had an air of triumph. There was the sold-out success of “Fire Shut Up in My Bones”; a series of ambitious revivals, including the Met’s first performances of the brooding original version of Mussorgsky’s “Boris Godunov” and Wagner’s six-hour “Die Meistersinger von Nürnberg,” the longest opera in its repertory; and Matthew Aucoin’s recent “Eurydice,” wherein a sprawling orchestra thrashed Sarah Ruhl’s winsome version of the Orpheus myth.

Then the rise of the Omicron variant in late fall began to assert performances, festivals and concert events. The Vienna State Opera was closed for nearly per week. However the Met buckled down, strengthening its already stringent health protocols and dipping right into a broad pool of covers to fill in for sick artists. With luck on its side, it stayed open through the winter — and into yet one more rise in cases this spring.

Broadway shows kept canceling on the last minute or closing entirely, however the Met, America’s largest performing arts institution, never did. That might be Gelb’s legacy from this troubled period, together with the landmark “Fire” and the unrelenting position he took after the invasion of Ukraine, when he declared that the Met would sever ties with artists who supported President Vladimir V. Putin of Russia. That ultimatum had one singer in mind: the Russian soprano Anna Netrebko, the corporate’s leading diva, who criticized the war but remained silent about Putin. In a coup, Gelb replaced her as Puccini’s Turandot with the Ukrainian soprano Liudmyla Monastyrska, who drove the audience wild when she wrapped herself in a Ukrainian flag to take her bow.

Gelb’s Netrebko decision wasn’t universally praised, and other major opera houses now appear to be inclined to welcome her back, classifying her as merely a outstanding Russian, not a hardcore Putinist. But throughout the Met, the moral clarity of the war proved a unifying force: On the profit concert for Ukraine, some players within the orchestra even applauded Gelb, their nemesis throughout the grueling furlough, as he declared from the stage that they were “soldiers of music.”

Somewhere within the midst of politics and the virus was opera. Under the focused baton of Sebastian Weigle, “Boris Godunov” was memorably grim within the concentrated form Mussorgsky gave it before a hodgepodge of revisions; “Meistersinger,” expansive enough that it really does appear to convey a complete world, was relaxed and sunny, and gently comic as led by Antonio Pappano.

Davidsen, in Strauss’s “Ariadne auf Naxos,” a mythic creation of flooding tone, also lavished her soaring soprano on Eva in “Meistersinger” and Chrysothemis in Strauss’s “Elektra,” her voice almost palpable against your skin. The mezzo-soprano Isabel Leonard brought silvery elegance to Cherubino in Mozart’s “Le Nozze di Figaro” and the Composer in “Ariadne.”

There have been sympathetic soprano star turns from Ailyn Pérez as a fiery soloist within the Sept. 11 Requiem and a girlish Tatiana in “Eugene Onegin,” Eleonora Buratto as a reserved Madama Butterfly and Elena Stikhina as a kindly Tosca — in addition to from Sonya Yoncheva, in a solo recital of shadowy sensitivity.

While Blanchard’s rating moved comfortably between bars, college parties and fraught, tender nocturnes, “Fire” was fairly turgid as drama, its individual sequences clear however the broader conflicts driving its characters obscure. (It was telling that probably the most dazzling sequences on this opera were Camille A. Brown’s dances.)

Perhaps most remarkable in regards to the offerings this season were the three — count ’em — works from the past five years: “Fire,” “Eurydice” and Brett Dean’s “Hamlet,” which set to seething music Matthew Jocelyn’s moodily distilled version of Shakespeare. The Met has not had so many recent operas on a single yr’s lineup for the reason that early Nineteen Thirties, even when that number is notable only within the context of the stubbornly backward-looking world of opera.

Not way back, the concept of three contemporary operas in a Met season would have been preposterous. This was largely because the corporate’s longtime music director, James Levine — while he expanded the repertory significantly and presided over a handful of premieres — didn’t prioritize newer work.

But his successor, Yannick Nézet-Séguin, agrees with Gelb that contemporary operas are crucial, each artistically and for expanding the corporate’s audience. And Nézet-Séguin is putting his money where his mouth is: He conducted each “Fire” and “Eurydice,” and leads Kevin Puts’s “The Hours” in the autumn and Blanchard’s “Champion” next spring. (The early months of this season, though, were an exhausting workload when coupled together with his duties as music director of the Philadelphia Orchestra: He dropped out of a run of “Le Nozze di Figaro” to take a four-week sabbatical around the brand new yr.)

The continuing transition out of the Levine era has been obvious not only within the repertory, but in addition within the orchestra’s sound — which was noticeably lighter and lither in three works closely related to Levine: “Meistersinger”; Stravinsky’s “The Rake’s Progress,” led by Susanna Mälkki; and “Don Carlos,” which Nézet-Séguin delivered to the Met for the primary time in its original French.

This variation is for higher and worse. The ensemble played these pieces with brisker transparency and maybe more varied colours; Nézet-Séguin’s textures in “Don Carlos,” airier than Levine’s, felt of a chunk with the elegant nasality of French. In “Hamlet,” conducted by Nicholas Carter, the orchestra was ferocious. But a certain grandeur is now missing, as a rule: the burden of Levine’s “Meistersinger” prelude, for one thing, and the gleefully straight-faced bombast of Baba the Turk’s entrance in his performances of “The Rake’s Progress.”

Even a frequent operagoer or critic can’t see the whole lot or everyone. I missed a latest, family-friendly abridgment of Massenet’s fairy-dust “Cendrillon.” And after opening a latest production of Verdi’s “Rigoletto” on Recent Yr’s Eve, the baritone Quinn Kelsey — acclaimed within the title role — got here down with Covid-19 and missed a number of performances, including the one I attended. But I got to see his credible alternative: the baritone Michael Chioldi, finally getting his first big role on the Met after years as a stalwart of the Recent York opera scene.

That was one among 4 performances on the opera house that I watched in a single weekend in early January, throughout the first Omicron wave. Such a marathon was a unprecedented exclamation point on the Met’s achievement in merely keeping the lights on.

It wasn’t enough to taste opera after a year-and-a-half fast. I desired to gorge.