On the U.S. Open, 5 Artists Get a Place within the Sun 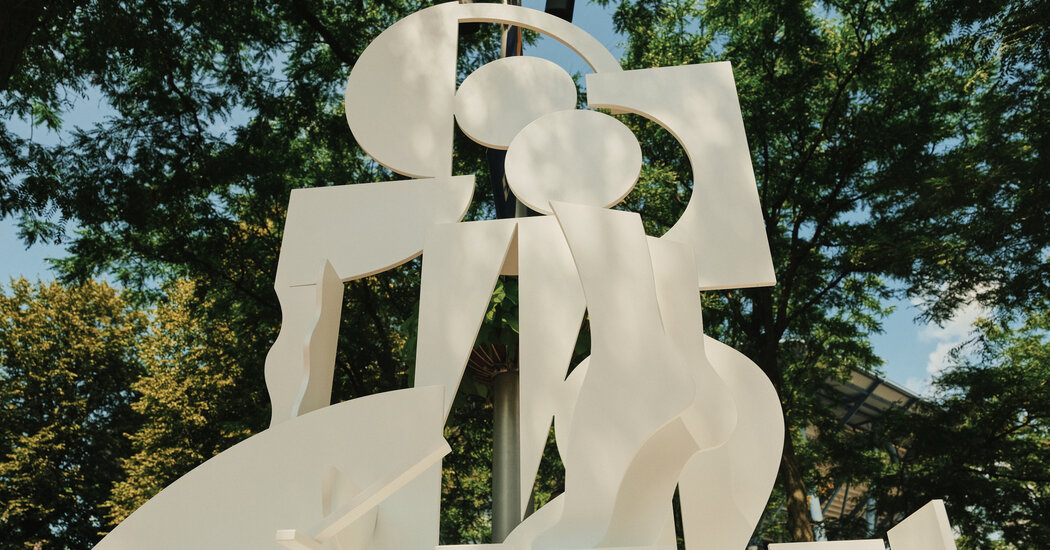 Sculptures by five artists went on view at the united statesT.A. Billie Jean King National Tennis Center in Flushing, Queens, Tuesday during Fan Week, six days of festivities and qualifying tournaments. The five works, which can remain on view until Sept. 11, are in collaboration with the Armory Show and the US Tennis Association and function an extension of Armory Off-Site and the tennis association’s Be Open social justice campaign, which first presented paintings in 2020 from 18 Black and Indigenous artists at Arthur Ashe Stadium.

This 12 months, a few of the sculptures have obvious associations with the game. In “Now I Won,” by Myles Nurse, a larger-than-life, Wilson-yellow metal tennis player inspired by Billie Jean King is preparing to serve. On Tuesday, when a baby began using the baseboard of the sculpture as a trampoline, Nurse said it didn’t trouble him: He was relieved, he said, on the sculpture’s durability. (The sculpture had sold for $12,000 to a buyer in Miami a couple of days earlier.)

Nurse said he wanted viewers to visualise themselves throughout the stance. “You would see a champion inside yourself by seeing anyone else reaching these amazing feats,” he said.

Welding runs in his family. Nurse’s grandfather ran a metal fabrication business in Jamaica, which he continued after immigrating to the U.S.

“It was within the blood,” Nurse said, “but I’m doing it from a distinct perspective.”

Carolyn Salas’s work was also inspired by King. She said she remembered watching the fraught, but highly attended, match between King and Bobby Riggs within the 2017 film “Battle of The Sexes.” In her sculpture “Tippy Toes,” Salas compares the each day uncertainties and struggles a lady faces to walking on a tightrope.

“There’s just a continuing struggle between that concept of the masculine and the female as a lady without delay,” Salas said.

Jose Dávila’s artwork incorporates each industrial and naturally occurring elements. In his “Untitled Work,” a cerulean blue boulder is sandwiched between two slabs of concrete.

“Most of the boulders I work with, I select myself while walking within the countryside,” he wrote in a press release. “I’m interested by the primitiveness of rocks, of materials which have at all times been there, that can at all times be the identical, that show the patina of time.”

“To Rise and Begin Again,” by Luzene Hill, depicts a series of undulating aluminum columns. Hill placed a Cherokee syllabary character above each column to spread awareness of the lyrical language. The columns also resemble the Recent York skyline, inbuilt part by the Mohawk ironworkers within the early 1900s. “The underlying a part of all of my work” is survival, she said.

Hill’s father is Cherokee (her mother is white), and her grandparents were sent to the Carlisle Indian Industrial School in Carlisle, Pa., leaving her and her father unaware of their native tongue. Hill said she had develop into fascinated by the language’s collectivist, matrilineal perspective.

“Indigenous people have survived 500 years of colonial violence on many, many levels and I’m really completely happy that’s my DNA,” Hill said in a video call from her home in North Carolina, situated on the Eastern Band of Cherokee Indians reservation.

Like Hill, Gerald Chukwuma’s work has direct ties to his heritage. “Ogadiligmma” or the “Town Cryer” is a component of his Igbo Landing series, which pays tribute to the 75 West Africans in 1803 who took control of a slave ship off the Georgia coast after which walked into the water, committing mass suicide. Born within the eastern region of Nigeria, Chukwuma said the West Africans were his ancestors and that determination was an inherent trait.

“After we decided to not be taken as slaves, it wasn’t something that happened by likelihood,” he said of his ancestors, “It was how we were created. That’s our culture. That’s who we’re.”

As visitors holding tennis bags posed next to Chukwuma’s sculpture, buried in sea debris he collected from the Lagos shores, the artist said he hoped that his work would help raise awareness of the neglected Igbo people.

“I’m sure for those who listen closely whenever you get there you possibly can hear him speak,” he said of the sculpture. “I’m sure he’s going to inform stories.”