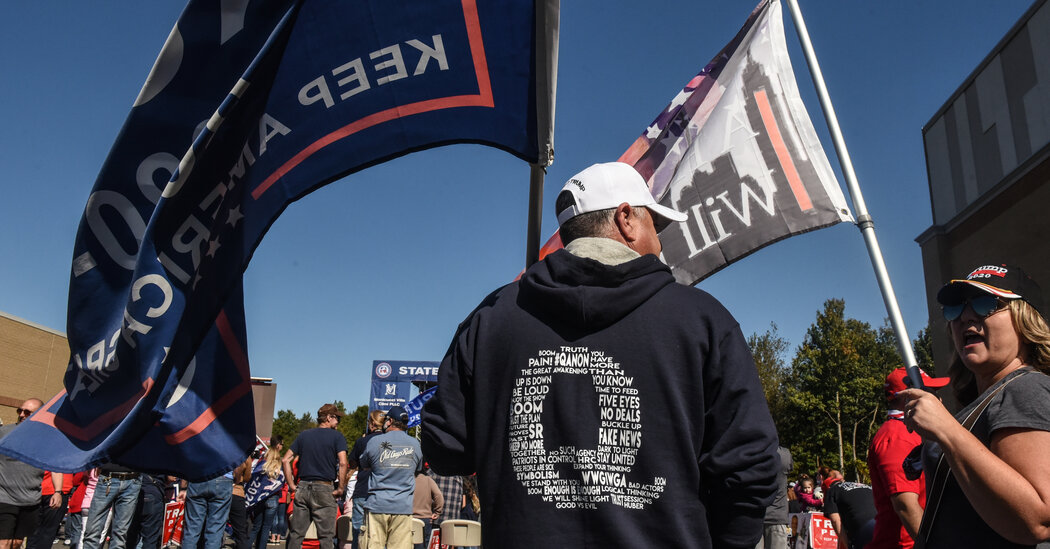 On Truth Social, one user with greater than 31,000 followers and three Qs in his profile name posted a picture in May of Mr. Trump sitting on a throne with a crown and a Q emblem behind him. Mr. Trump reposted the image.

Mr. Trump has also amplified messages that included the QAnon slogan WWG1WGA (for “where we go one, we go all) and that referred to a “storm,” an outline for the mass arrests that the QAnon faithful consider can be used to destroy the deep state. Other messages later backed by Mr. Trump included a call for “civil war” and claims that the 2020 presidential election, which he lost, was a “coup,” based on the report.

Mr. Trump also shared messages a minimum of a dozen times from an account that posted concerning the “storm” and “a war against sex traffickers and pedophiles” to its greater than 36,000 followers, NewsGuard found. Ricky Shiffer, a person killed by the police this month after he tried to breach the F.B.I.’s Cincinnati office, had also engaged with the identical account.

Of the QAnon accounts identified on Truth Social by NewsGuard, 47 have red verification badges, which the platform says it reserves for “VIPs” with “an account of public interest.” Data.ai, which monitors app store activity, said Truth Social had been downloaded three million times in the USA on Apple iOS systems through Aug. 26.

Truth Social executives and backers have also interacted with QAnon supporters on the platform. Devin Nunes, a California Republican who resigned from Congress after 19 years to develop into Truth Social’s chief executive, repeatedly engaged with and tagged @Q. That account, which has greater than 218,000 followers, has used “trust the plan” and other phrases related to the conspiracy theory, NewsGuard said.

Mr. Trump teamed up with Digital World Acquisition, a special purpose acquisition company, to start out Truth Social. Digital World’s chief executive, Patrick Orlando, has also reposted QAnon catchphrases for his nearly 10,000 followers on the platform, based on the report — which a representative for Mr. Orlando described as a “false and defamatory” accusation.