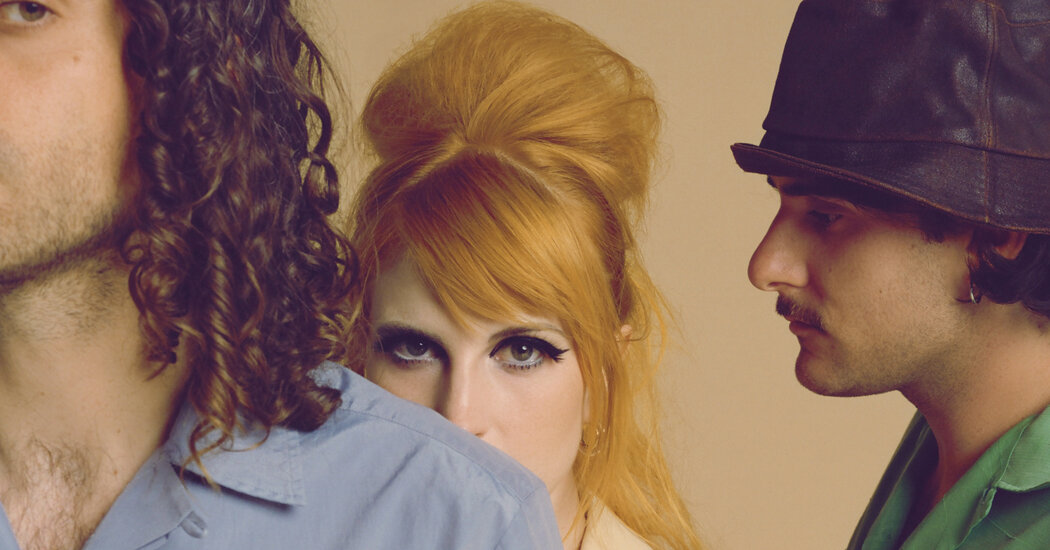 Paramore has regrouped after Hayley Williams’s 2020 and 2021 solo albums showed how far her music could stretch beyond punk-pop and recent wave. On the title song of its first LP since 2017, “This Is Why” (due in February) Paramore goes for wiry syncopation, not punk drive and power chords. “If you’ve an opinion, possibly it’s best to shove it,” Williams sings, with biting mock-sweetness, over a backbeat and a hopping bass line. Choppy, clenched guitar chords — with greater than a touch of INXS — goad her as she sneers an irritated response to a sourly divided national mood: “Because of this I don’t leave the home.” JON PARELES

For much of their smoldering recent album, “Cool It Down,” the once hyperactive Yeah Yeah Yeahs effectively reinvent themselves as purveyors of lush, slow-burning art-rock (see: the apocalyptically gorgeous, almost “Disintegration”-like leadoff single “Spitting Off the Fringe of the World”). “Fleez,” nevertheless, harkens back to the barbed sound of their 2003 debut, “Fever to Tell,” and to the glory days of the indie sleaze sound the Latest York trio helped pioneer. Satirically — or perhaps as a reminder of how indebted that aesthetic was to the echoes of downtown past — the Yeah Yeah Yeahs do that by interpolating the funky groove and titular refrain of the South Bronx greats ESG’s 1983 single “Moody.” “I make my transformation, and it feels ni-i-i-i-i-ce,” Karen O vamps atop a chunky Nick Zinner riff and a shuffling Brian Chase beat — still, in any case these years, a chemistry experiment that produces singular sparks. LINDSAY ZOLADZ

LCD Soundsystem’s first recent song since 2017, for the soundtrack of Noah Baumbach’s film of the Don DeLillo novel “White Noise,” is the band’s latest jaunty, motoric grievance about money and mortality. “I want a recent love and I want a recent body/to push away the top,” James Murphy proclaims. LCD Soundsystem digs in, once more, to the late-Seventies moment when punk, minimalism and dance music found a standard stomping ground. “Latest Body Rhumba” is brawny and discordant, juggling sarcasm and sincerity, taunts and yearnings. Its final stretch, tootling and pounding over an insistent drone, could also be a deathbed revelation, as Murphy belts, “Go into the sunshine!” PARELES

It’s been nearly 10 years for the reason that country-influenced indie musician Caitlin Rose’s most up-to-date album, the whip-smart 2013 release “The Stand-In.” Later this 12 months, she’ll break that long silence along with her third record, “Cazimi,” out Nov. 18. The newest single, the stomping, sassy “No one’s Sweetheart” finds the silver lining in the one life, with Rose musing in her knowing drawl, “While you’re no one’s sweetheart, you make the foundations.” Even higher, she adds, you’re “no one’s idiot.” ZOLADZ

Robert Smith was in love on Friday, Rebecca Black needed to get down on Friday and now Greta Kline — leader of the indie-pop project Frankie Cosmos — freaks out on Friday. That’s what the playful acronym “F.O.O.F.” stands for and, accordingly, the newest single from Frankie Cosmos’s forthcoming album “Inner World Peace” is alive with Kline’s signature wry, muted humor. “It’s still Wednesday, I actually have to attend two more sleeps ’til I can freak,” Kline sighs, while a mildly noodly guitar solo saves up its most raucous energy. That the temporary song ends before that promised freakout is the purpose: Kline is more interested by capturing that hopeful, anticipatory feeling — often a comforting fiction — that every thing will likely be all right once the weekend comes. ZOLADZ

“What number of breaks will it take until we are able to’t fix it?” Nisa Lumaj sings in “Sever” from her recent EP, “Exaggerate.” The modest, bedroom-pop-like production stays patient and contained until it isn’t. Nisa muses, at first just above a whisper, a few deteriorating relationship; her voice is cushioned by synthesizer chords while guitar lines poke at her like unwanted realizations. But when the distorted strumming starts, the explosive breakup is inevitable. PARELES

Dram, ‘Let Me See Your Phone’

The digital era enabled countless recent avenues for surveillance and jealousy, and the R&B songwriter Dram sings about one in “Let Me See Your Phone.” The track uses slow-rolling, vintage soul chords, and Dram switches between earnest soul tenor and falsetto as he details an accusation — “After I look in your eyes/they don’t shine as vivid as they used to” — and demands a forensic investigation: “Type in your passcode so I can see inside your soul.” Cheaters, by now, should understand that they need to keep certain communications offline. PARELES

“I” is the primary and most austere segment of the 35-minute composition (and album) “Shebang” by the guitarist, composer and digital manipulator Oren Ambarchi. Although he’s joined by other instruments in the remainder of the piece, most of “Shebang I” is guitar alone: restless staccato picking that’s multitracked, looped and digitally edited, constructing hypnotic polyrhythms around an unchanging chordal root. Within the last minute, cymbals and other sounds join him, only hinting at what the remainder of the piece will grow to be. PARELES

The guitarist Bill Frisell’s tribute to a longtime friend, the high-concept producer Hal Willner, brings the lightest possible touch to an elegy; it’s from his recent album, “4.” The harmonies are a slow, transparent cascade of clusters from Gerald Clayton on piano, while the drummer Johnathan Blake scatters cymbal taps against the waltzing lilt. Frisell shares the melody with Clayton and Gregory Tardy on tenor saxophone; each of them departs from the tune in short, conversational asides before returning to what seems like a fond, shared reminiscence. PARELES