Pelé Honored by 1000’s of Brazilians at 24-Hour Funeral 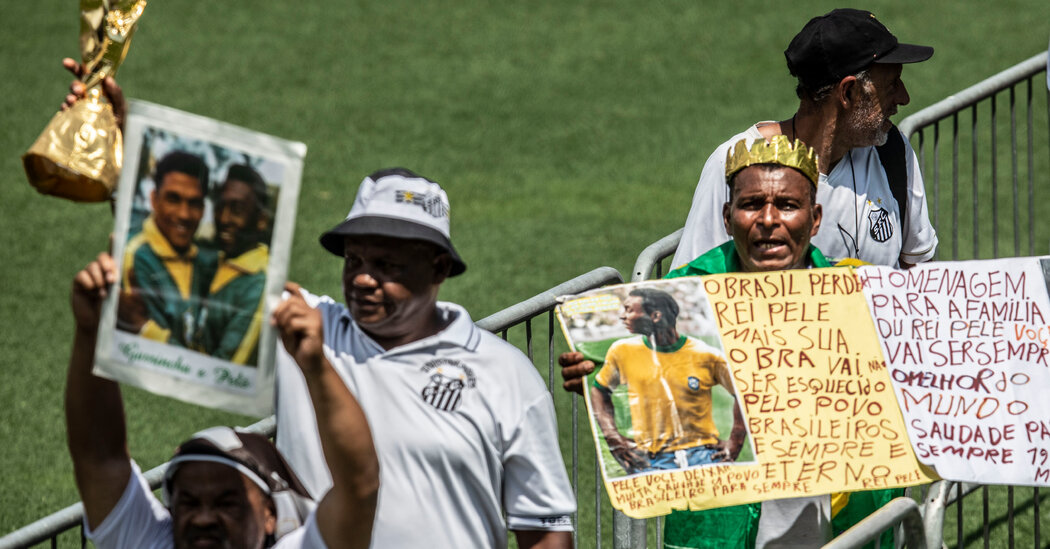 At 6 a.m. on Recent 12 months’s Day, Antônio da Paz boarded a bus for the funeral of the soccer icon Pelé and rode the 4 hours to Santos, Brazil, where his idol was set to lie in state.

When he arrived, he was a full day early — and the primary in line. He had no chair, no blanket, no pillow. Only a homemade crown, a plastic World Cup trophy and a Brazilian-flag jumpsuit.

“I slept with just my shirt and a hat so it wouldn’t hurt my head,” da Paz said Sunday, recalling his night on the concrete. “However it was value it because he’s the king. A person who brought Brazil to the world — through him, through the ball.”

The love, the adoration and the reverence for the person that Brazilians and plenty of others call the king of soccer was on full display Monday in Santos, a port city that Pelé placed on the map because the electrifying star of its soccer club for 18 years.

Santos opened the doors to its 16,000-seat stadium at 10 a.m. Monday, and a gradual stream of fans began filing past Pelé’s body, which is lying in a dark coffin at midfield, covered in flowers and draped in a veil. The stands around him were draped with banners of his likeness and a message: “Viva o rei,” or “Long live the king.”

Outside the stadium, fans from across Brazil and beyond had lined as much as pay their respects, with the road taking nearly two hours to achieve the stadium by late morning. There have been fathers with daughters, moms with sons and vendors selling beer, fried snacks and roses within the shade of the colonial architecture. One man hurriedly handed out pizzeria menus to anyone who would accept one. The conversation in all places was about one thing. “Above him, only God,” one man said to a different while passing by.

“The atmosphere here’s a little bit of sadness and a little bit of joy — sadness because he died and joy due to the individuals who saw him play and are talking about his history,” said Marcelo Alves da Silva, 41, a risk-investment analyst who attended the event along with his 4-year-old son, Mathias, on his shoulders. Da Silva had taken the break day, and he drove the 2 hours from São Paulo. “It was necessary to point out my son,” he said.

But not everyone was prepared to enter. Onofra Rovai, 91, has lived across from the doorway to the stadium for 50 years and said she had met Pelé various times through the years. From her second-floor perch on Monday, Rovai, a retired sewing teacher, watched the group snake into the stadium, but she said she wouldn’t be joining it. “I would like to recollect him alive, as he was before,” she said, wearing a Santos jersey. “For me, he didn’t die.”

Back toward the top of the road, da Paz was getting back from a lunch of rice and beans — he hardly ate during his 24 hours in line — and was now on his technique to get back within the queue.

Then someone approached and slapped him on the back. It was Renato Sousa do Santo, a 68-year-old driver who met da Paz after they each began waiting outside Pelé’s hospital in São Paulo last week when news emerged that he was nearing death. That they had hoped to enter to perhaps meet the soccer star, but as an alternative they were stuck outside and began a friendship on the sidewalk.

“They wouldn’t allow us to enter, so we just stood there, identical to we’re here,” Sousa said. “We put signs up on the wall, and all of the reporters would come and refer to us.”

Then one other voice shouted from the space: “What’s up, gentlemen? Didn’t I say I could be here?”

It was Marcolino Olímpio de Oliveira, 62, a painter from the São Paulo suburbs. He had also met da Paz and Sousa outside Pelé’s hospital, a part of a small group that gathered in the ultimate days of the star’s life. Now they were together again at his funeral.

“Pelé was all the pieces,” Olímpio said, carrying a big book about Pelé. “All the pieces he did, he did well, from playing, singing, acting.” He said he watched one in all Pelé’s movies recently. “I cried twice,” he said.

The boys got in line together. Two hours later, they were passing by Pelé’s coffin. As he walked across the sphere, da Paz shouted and held aloft a homemade sign that said, “Brazil lost the king, but your work won’t be forgotten by the Brazilian people.”

After he exited the stadium for the second time, da Paz’s plan was clear: “I come straight out and back in again.”