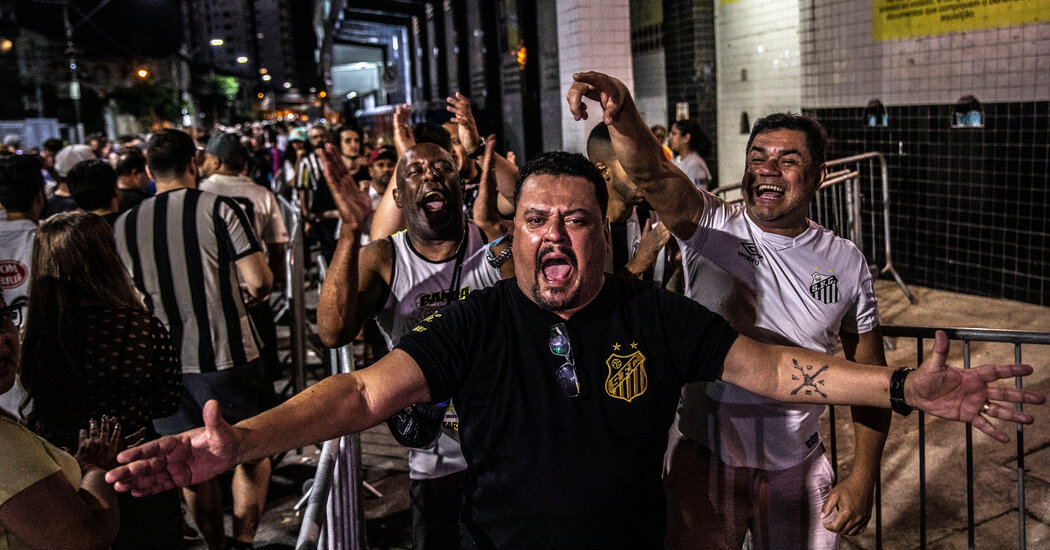 SANTOS, Brazil — The town, it appeared, was asleep. The streets were empty, the shops were closed and a dog howled in the space. Then, just a few blocks from the soccer stadium that put the port city of Santos on the map, there have been signs of life. A number of it.

It was 3 a.m., and 1000’s of individuals were queued in an orderly line stretching around two-thirds of a mile, waiting to see the body of one among history’s most luxurious athletes in its final moments before entombment. The soccer star Pelé’s 24-hour wake was in its seventeenth hour, and by the looks of the group, at some point won’t have been enough. The Santos soccer club estimated that 230,000 mourners had been through the stadium.

“This is not any sacrifice,” said Walter Henrique, 35, a tax analyst who traveled three hours to the wake and needed to be at work in five hours, yet had one other few hours before he can be through the road. “He gave us a lot joy that it’s a pleasure to be here.”

The predawn crowd in Santos had different reasons for arriving at such an hour. Mourners had clogged the roads from São Paulo, ensnaring many individuals in traffic. Some had gotten off work late, or they desired to avoid the midday sun. And still others had believed that in the event that they got here while town was sleeping, they might avoid the road.

“It was not a superb strategy,” said Vinícius Fortes, 58, a software engineer who arrived along with his family at 1:15 a.m. local time and located a for much longer queue than expected. “I used to be voting to not stay. I said, ‘Look, we’re going to attend for 2 hours to be near a box for 10 seconds.’”

He was outvoted. Now his family had waited two hours, and it appeared that they had one other hour to go. “But day by day you go home and sleep,” Fortes added. “It is a moment in your life you will remember perpetually.”

Fortes’s 27-year-old son, Guilherme, was the just one who needed to work within the morning, but he appeared unfazed, even after they read on the news that the road had been paused for half-hour because officials were changing the flowers. “I’ve made worse decisions in my life,” he said.

The mood not exactly somber, but the group was sober. One street vendor, Ednalva Cruz da Silva, had a pile of booze on ice, including cans of Brahma beer and a bottle of Johnnie Walker whisky, but nobody was partaking. As a substitute, she was selling waters and soda. “Often it’s about 100 beers to each water,” she said. “That’s not the concept tonight.”

Still, the road got a bit louder because the stadium approached. One group particularly was leading the way in which with chants for the Santos soccer team — which included references to the time in 1967 when Pelé’s presence prompted a cease-fire in a civil war in Nigeria.

The group had grow to be something of an attraction at an event where everyone was searching for a distraction. The nine men had met in line, bonding over the previous three hours: a police officer, a supermarket clerk, three high schoolers, two chefs, a Rastafarian carpenter with a soccer ball and the owner of an industrial-automation company in an ankle-length robe and head scarf. He had worn the outfit to the World Cup in Qatar, but had sewn on a Santos patch hours earlier, and now had been posing for photos for hours.

“Pelé was the king,” said João de Souza, 58, the entrepreneur in the top scarf, wearing sunglasses at 3:30 a.m. “He showed the Brazilian spirit to the entire world, showed that Brazil has guts.”

Pedro Camargo de Souza, 17, a highschool junior within the group, said he had taken public transportation for 3 hours to reach. “I got here alone because I’m the one Santos fan in my family,” he said. “They thought I used to be crazy but what were they going to do?”

As they neared the doorway, stadium employees ordered the group in a single-file line and ushered them along. “Good evening,” one usher said. “Or good morning.”

At 3:40 a.m., they walked through the gate and onto the sphere. Silence fell over the crew. There was just the faint sound of Pelé singing a samba tune, “My Legacy,” a track that he released in 2006 and that played on repeat on the stadium as he lay in state.

Most of the men held their phones aloft, filming the flowers; the banner that said, “Long live the king”; and the Jumbotron with a picture of a crown.

Then, just as they approached Pelé’s body at midfield — lying in a dark coffin, covered in flowers and draped in a veil — the silence erupted in a roar of greater than 100 men. It was one among the Santos fan clubs, shouting a team chant, waving 4 enormous flags and lighting a flare in a before-dawn tribute alongside Pelé’s coffin.

The nine men looked on in awe, however the line kept moving. Inside three minutes, the group was back outside. “I cried,” said Camargo, the high schooler. “I’d do it 10 more times, a thousand. I’d do it as persistently as Pelé scored.”

They convened again next to a van selling grilled sandwiches. They exchanged contacts and recapped the moment. Some were headed home. Others would stay on the road or sleep of their automotive ahead of the funeral procession through the streets later that day, ending on the cemetery where Pelé’s coffin can be inserted into an aboveground tomb.

“Now he rests in peace,” João de Souza said. “But his legacy, his reign, can be everlasting.”